"Amelia": What becomes a legend most?

Hilary Swank has the face, and the swagger, to play Amelia Earhart. So why does this ambitious biopic stall out? 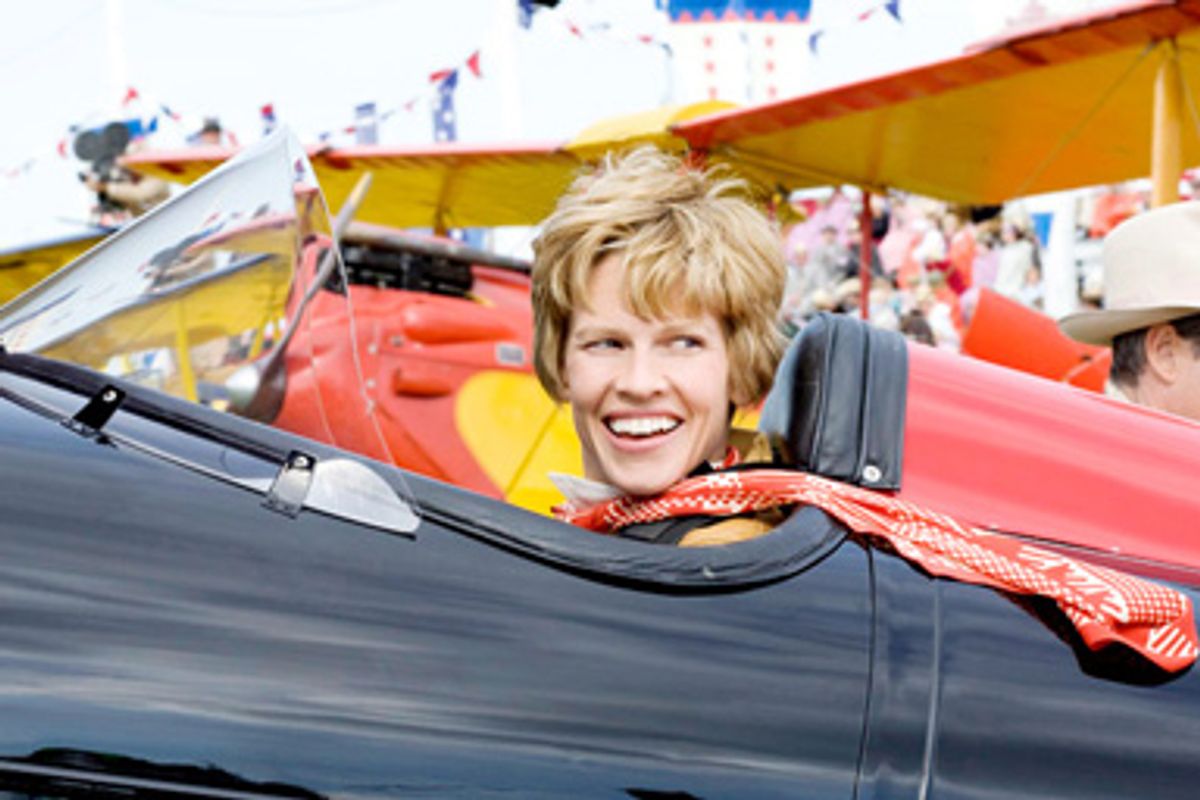 Mira Nair's "Amelia" purports to tell the story of a grand American legend, that of Amelia Earhart, whose plane disappeared in the Pacific in 1937 as she attempted to finish a record-breaking 'round-the-world journey. It's a big story, and a rich one, particularly when you factor in the complexities of Earhart's relationship with her publicist husband, George Putnam, and her extramarital affair with Gene Vidal (father of Gore), the director of the Bureau of Air Commerce under FDR. Then there's the fact that "Amelia" has perfect casting in its favor: There's no current actress better suited, in terms of appearance or temperament, to play Earhart than Hilary Swank.

But the last person we need to tell the story of a famous aviatrix who tragically lost her way is a filmmaker with a lousy sense of direction. "Amelia" is a stunted epic, an ambitious and handsome-looking picture that tells its story in the dullest, most confusing way possible: This is a movie about an on-the-go heroine who symbolizes a new era of freedom and mobility, which means people move around, a lot. But it's often hard to tell exactly where the major players are and what, exactly, they're doing there. The movie isn't just about rootlessness; it's lost in the clouds itself. The filmmaking is vague when it needs to be specific and aggressively expository when it needs to be understated. This Earhart feels the need to talk about her love of flying incessantly, lest anyone think the first aviatrix to fly solo across the Atlantic is somehow lacking in passion. When a journalist asks her if she plans to quit flying after her 'round-the-world journey, she replies, "Not while there's still life in me. I fly for the fun of it." Elsewhere, she proclaims she wants to be "free, a vagabond of the air." Later, during the course of her ill-fated final trip, she announces in voice-over, "I am on my shining adventure." Watching "Amelia," you'd think Earhart was a talker, not a doer.

Nair and the screenwriters (Ronald Bass and Anna Hamilton Phelan, who drew partly from Susan Butler's "East to the Dawn" and Mary S. Lovell's "The Sound of Wings") begin Earhart's story near the end, as she's about to leave Miami on her ill-fated journey. They revisit Earhart during various points on that journey: She and her navigator, Fred Noonan (Christopher Eccleston), share some laughs, with a goat, in the desert; while airborne, she points out a herd of running beasts below, marveling, in just one more example of the movie's typical "tell, don't show" approach, "Look how free they are!" Nair hops around the landscape of Earhart's life, covering with schoolbookish zeal her major achievements and alighting briefly on her merchandising and moneymaking efforts. (Earhart had her own line of luggage, and at one point in the movie, she hawks a waffle iron.)

Nair also tries to delve into Earhart's unconventional love life: In the movie's vision, this freedom-loving explorer reluctantly agrees to marry her longtime friend and publicist Putnam (Richard Gere), and even though she's happy in that marriage, she can't resist the brainy, dashing Vidal (Ewan McGregor). Nair treats the love triangle, wisely, as if it were a delicate dance whose steps can't be diagrammed -- there's no moralism or judgment in her approach. But these intertwined love stories never ignite; they don't even glow with comfortable domestic warmth. At best, Earhart's love life is examined in a way that's serviceable but inert -- and who wants that in a biopic that admits, by its very look, to being a romanticized vision?

Because for all its flawed storytelling, "Amelia" is certainly beautiful to look at. Cinematographer Stuart Dryburgh ("The Painted Veil") gives the picture a lush period look -- even the puffy clouds have an art-deco vibe. It's also a terrific movie for vintage-fashion lovers: Earhart's clothes (as put together by costume designer Kasia Walicka-Maimone) range from soft but utilitarian cognac leather jackets to drapey around-the-house kimonos -- they're the smart, liberated girl's idea of luxury.

And Swank wears those clothes well: She gives a wonderful physical performance here. In fact, she tells us more about Earhart's life through her body language than she does in the dialogue. Swank's Earhart has a broad but slow-burning smile; her gait suggests a person who's gangly-graceful, generous and approachable -- as Earhart, Swank's very limbs seem to call out, "Howdy!"

But as perfect as Swank is for this role, the dialogue sounds stiff and overwritten as it emerges from her lips. Swank has strong, marvelous features, yet she's an actress of remarkable delicacy -- that combination is part of what generally makes her so pleasurable to watch. But in "Amelia" she comes off as awkward and uncertain, as if she were trying to underplay the movie's too-obvious dialogue and not fully able to bring it into focus. She's best in her scenes with Gere, perhaps because he knows exactly what to do with this material. As a young actor, Gere was gorgeous and, for the most part, numbingly dull. But sometime around the era of Garry Marshall's "Runaway Bride," he began to loosen up and liven up. (And he is still, of course, gorgeous.) Gere doesn't have a '30s movie-star face, exactly. Yet somehow his face speaks of a time older than our current age, which is why he's perfect for '20s and '30s characters. Late in "Amelia," Gere has what is, on paper, one of the corniest lines of movie hokum imaginable. But because he understands the heritage of movie romance intuitively, he turns this potentially stale little nugget into something alive and thriving, and he momentarily brings the whole enterprise to a new level of passion and integrity.

Nair -- whose last picture was the Jhumpa Lahiri adaptation "The Namesake" -- is a frustrating filmmaker. The final sequence of "Amelia," which gives us an imagined view of the pilot heroine's increasing frustration as she realizes she can't communicate with the naval vessel on whom her life depends, is admirably restrained: Nair's instincts must have told her that this was a place to ease up on the dramatic suspense rather than put a chokehold on it, and the approach works -- the tension of the scene is sustained beautifully. But not even this intelligently emotional ending is enough to erase the tedium of what came before. Amelia Earhart's disappearance is one of the great mysteries of the 20th century. "Amelia" clips its wings.