The number one rule of American politics:  the greatest, most insatiable need of the standard conservative is to turn themselves into oppressed little victims.  In The Daily Beast today, Tucker Carlson devotes his entire column to complaining that Obama is "bullying" Fox News, absurdly claiming that the White House and liberals are trying "to use government power to muzzle opinions they don't agree with."  Needless to say, Carlson doesn't say a word about the endless -- and far worse -- attacks by the Bush White House on a whole array of media outlets, ones that went far beyond mere criticisms.

But far more delusional is Carlson's central complaint:  that "the press decide[d] to go along with all of this" -- meaning Obama's criticisms of Fox.  He echoes the typical, woe-is-us conservative whine:  "Why is the press corps giving the White House a pass for behavior it would never have tolerated from other administrations?"   He righteously condemns what he calls "the press corps' shameful silence" on the Obama/Fox conflict and alleges that "hardly anyone in the press says a word" about this matter.

Is Tucker Carlson lying or just completely ignorant of the subject matter on which he's opining?  The press has been anything but "silent" about this.  It's been a virtual consensus from establishment pundits and journalists of every type that the Obama White House is doing something terribly wrong by criticizing Fox.  And as usual for the vapid, group-think, script-repeating, mindless wind-up dolls who compose the Beltway press corps, they even have their own endlessly repeated platitudes for condemning Obama's criticisms of Fox:  it's Nixonesque.  Enemies List.  Also as usual, they are echoing the theme propounded by Karl Rove on Fox:  "We heard this before from Richard Nixon.  And we have this White House prone to that kind of attitude. . . . This is the White House engaging in its own version of the media Enemies List." 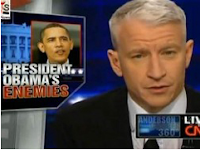 The Washington Post's Ruth Marcus wrote two items condemning the Obama White House, saying it has "a Nixonesque -- Agnewesque aroma" and that the Fox criticisms were "dumb" and "weak."  Intoning underneath a photo that read:  "President Obama's ENEMIES," CNN's Anderson Cooper said: "this White House is starting to look like another White House" -- meaning Nixon's -- "and the comparisons are not flattering."  Just yesterday on NPR, NPR's Ken Rudin condemend the Fox criticisms as "Nixonesque" and accused liberals of cheering on an "enemies list," while The New York Times' David Carr sat beside him and said the President was being "heavy-handed."  CNN's David Gergen urged the White House to cease attacking Fox, and "even on MSNBC's 'Morning Joe' Monday, the panelists largely came out against the White House's war against Fox News."  Frequent Fox News critic David Zurawick of The Baltimore Sun condemned the criticisms and "compared the current administration to the White House of Richard Nixon and Spiro Agnew."  Numerous other media figures have sung the same tune.

All that hand-wringing rhetoric:  why?  Because the Obama administration threatened to criminally prosecute Fox?  Or because the adminstration surveilled its reporters' telephone calls?  Or illegally obtained their telephone records?  Or shot missiles at hotels in which they were staying?  Or dropped bombs on their offices?  Or imprisoned them for years without charges?  Or barred Fox reporters from riding on administration planes?  Or conspired to "weed out" any critical voices from being heard on network and cable news programs?   No, those are all things that the Bush administration did to reporters (see the links) -- all well above and beyond the numerous, constant rhetorical attacks from the Bush White House on media organizations they perceived to be hostile.  Where was Tucker Carlson when that was happening, or Ruth Marcus, or Anderson Cooper, or David Carr?

There has been a horde of media figures rushing to condemn the Obama administration merely for criticizing Fox's "reporting."  Many of these same media figures -- probably most -- were silent in the face not only of identical Bush White House attacks on reporters they disliked, but far more serious and actual threats to press freedom over the last eight years.

Yet perpetual self-victimizer Tucker Carlson has to ignore all these facts -- literally pretend they don't exist -- and completely reverse reality, all so he can whine about how unfair everything is to conservatives like him, how the BigBadLiberalMedia won't criticize Obama even though they were so terribly and harshly critical of Bush.  Just compare actual reality to Carlson's complaints about "the press corps' shameful silence" and his claim that "hardly anyone in the press says a word" about Obama's criticisms of Fox.  That huge, disturbing and disturbed disparity illustrates how petulant conservatives literally create their own demented reality, where they always get to be the put-upon victims.

UPDATE:  The New York Times reports that when the White House tried to exclude Fox from a round of interviews with Treasury Department official Kenneth Feinberg, "Fox’s television news competitors refused to go along," insisting that Fox be included.  Even Charles Krauthammer, on Fox, praised the media for standing up for Fox:  "what happened today was other news organizations -- admirably and on principle -- standing up and saying no."  And Fox News itself credited NBC White Correspondent Savannah Guthrie as "the first reporter to hold President Obama to account for his aides' 'attacks' on Fox News," when she questioned him with hostility about the criticisms.

Numerous establishment journalists have strongly condemned the Obama White House for its criticisms of Fox -- exactly the opposite of Carlson's complaints. The discrepancy between that behavior and their conduct towards the Bush White House's press attacks also demonstrates, as usual, that reality is the exact opposite of the Right's incessant and petulant complaints about "The Liberal Media."