Salma Hayek makes one sexy bearded lady, but she can't put hair on the chest of this good-natured kiddie horror pic 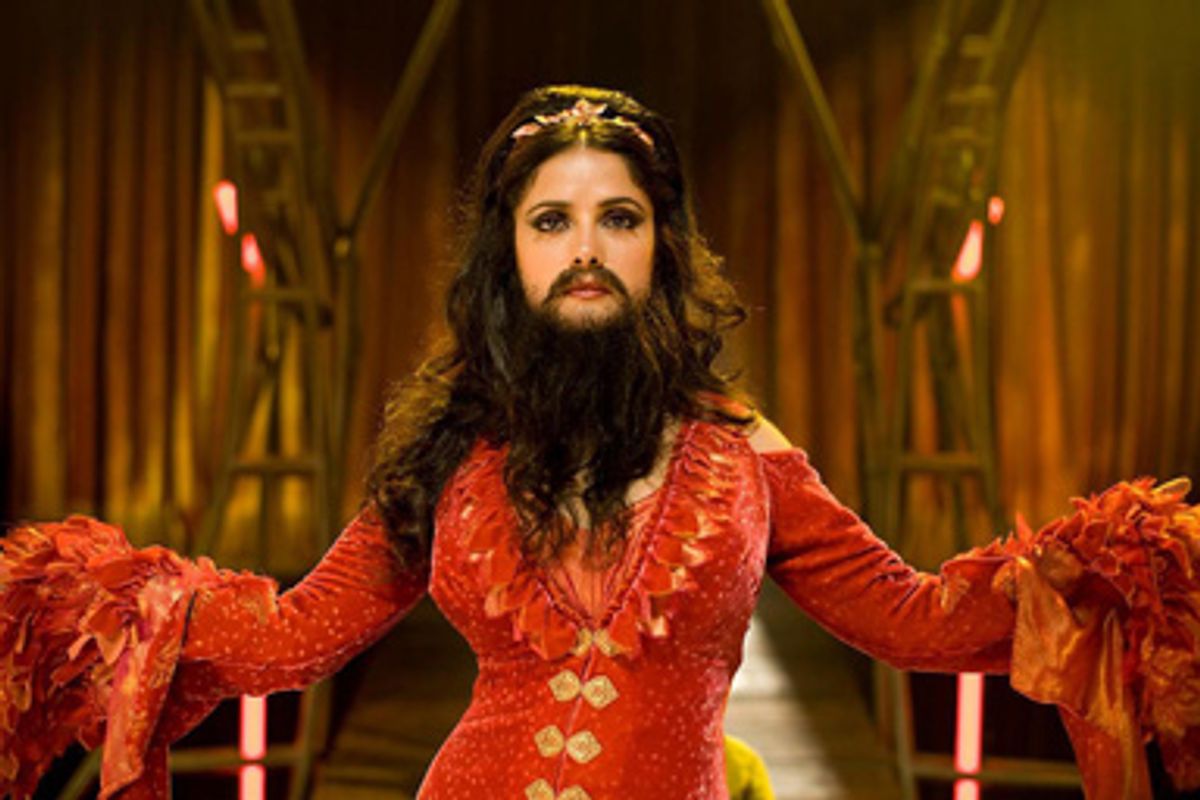 "Cirque du Freak: The Vampire's Assistant" has one of the most beautiful, and most promising, opening-credits sequences I've seen in ages, an extended animated reverie in which wandering vines and assorted creepy-crawlies drift across the screen in silhouette, the sort of thing Saul Bass might have dreamed up for Tim Burton if they'd ever worked together. Those credits (the designer is Garson Yu) aren't completely wasted: "Cirque du Freak" -- which is based on the series of kid-horror books by Irish novelist Darren Shan -- has a good-natured, spooky-fun spirit, and features some bright, clever visual touches, including a fuzzy-looking neon spider who skitters along on eight delicate, spindly legs.

But "Cirque du Freak" is only halfway there as a movie, which is frustrating considering how many potentially entertaining actors show up in it: John C. Reilly is a vampire showman who's half dapper Victorian, half Vaudeville clown; Salma Hayek is a bearded lady given to falling into sudden trances and making dire pronouncements, only to snap awake immediately afterward to ask ditzily, "What did I just say?" Those are just two denizens of the "freak" community that the movie's spider-loving teen hero, Darren (Chris Massoglia), falls in with. Darren is a good student whose parents nonetheless continue to overload him with their expectations. For that reason, he enjoys hanging out with his bad-influence best friend, vampire aficionado Steve (Josh Hutcherson), and one day the two receive a strange invitation, beckoning them to the world's oldest freak show. There, they're awed by Evra the Snake Boy (Patrick Fugit), who's kind of a shy snake (he just wants to play sensitive songs on his guitar); Alexander Ribs (Orlando Jones), whose digestive organs are on full view (luckily, they're artfully shot, so we don't really have to look at them); and Corma Limbs (Jane Krakowski), for whom losing a limb is no problem -- she can grow it right back, before our eyes.

It's a pretty colorful bunch. But "Cirque du Freak" is disjointed and disorganized, and it meanders when it needs to gallop. The director (and co-writer, with Brian Helgeland) is Paul Weitz, one-half of the directing team behind "American Pie" and "About a Boy," but also the director of the underrated Bush-era satirical fantasy "American Dreamz." In some ways, the movie shows the mischievous Weitz spirit: Its opening sequence features a cross-section view of an undead teen lying in a coffin -- texting away. "Cirque du Freak" doesn't take itself too seriously, which is a blessing. But maybe it doesn't take itself seriously enough: It feels rushed and indistinct; the plot is only barely worked out. And these actors -- including Willem Dafoe, in a slim role and an even slimmer, John Waters-style mustache -- wander around as if they're not sure what they're supposed to be doing.

"Cirque du Freak" might have been a pleasant corrective to the current "Twilight" madness, stoked by the impending release of "New Moon." I enjoyed the first "Twilight" picture, and admired it for not trying to be more than what it should be: A Goth soaper-romance for tweens and their slightly older sisters. But I've had enough of "New Moon" fever, and I admit those opening credits for "Cirque du Freak" raised my expectations to a perhaps unrealistic degree.

Maybe I'm not the only one. In an interview posted on the Scholastic Books blog, "Cirque du Freak" author Shan himself says that the credits sequence is his favorite part of the movie -- though he hastens to add that he likes the picture overall. Those credits belong to a film that was not to be; they wander the movie netherworld like a restless spirit, with nowhere to sink their fangs.