Pundits are making false comparisons between Obama and Nixon. They have no idea what they're talking about 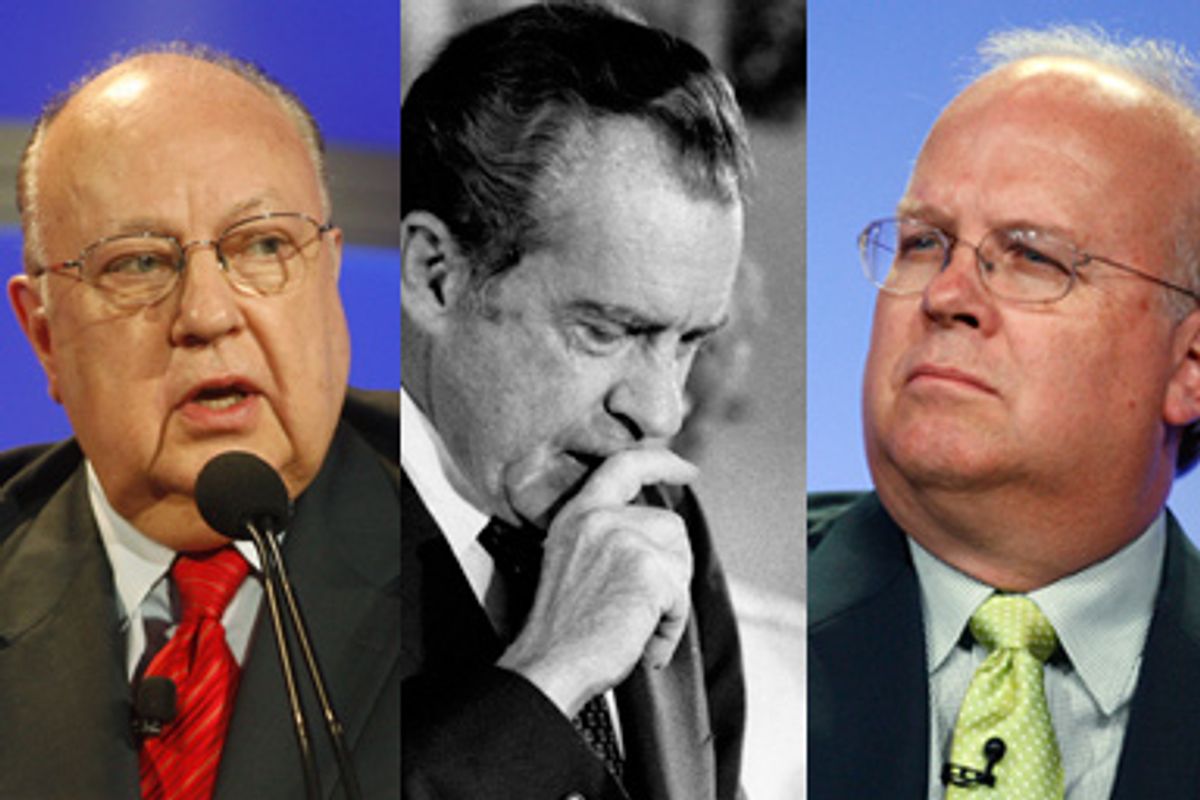 With outraged Washington journalists and Republican politicians crying "Nixonian!" over the public scuffle between the Obama White House and the Fox News Channel, what began as a mundane spat is turning into a cosmic jest. Somewhere, Nixon himself is enjoying a mordant laugh to hear this shrill defense of his old servant Roger Ailes, the television wizard whose deceptive campaigning ushered him into the presidency more than 40 years ago -- and who then became the living symbol of everything negative and nasty in American politics during the two decades that followed.

To understand what is going on today, it is essential to remember that where Ailes came from, "Nixonian" was not an insult but a badge of honor -- and seething hatred and even persecution of the press, rather than mere criticism, was a way of life.

Whatever the merits or defects of the strategy pursued by Obama's communications office in pushing back against Fox News, the furious backlash inside the Beltway is badly overwrought. Mainstream defenders of the conservative cable channel suddenly seem to be afflicted with a strange amnesia, causing them to forget not just the numerous episodes of partisan distortion that have permanently pocked its reputation, but the dirty war against the press and the First Amendment that was waged by the Nixon gang in the late '60s and early '70s. That lost memory does a disservice to journalism and history.

In a sense, Fox News Channel has never been able to overcome its nature as the offspring of Ailes, notoriously one of the angriest, toughest Republican consultants in politics, and Rupert Murdoch, the ruthless mogul whose political abuse of his news outlets became legendary long before he entered the cable news business. The objective for Ailes, as for Murdoch, is not fairness or balance; the objective is always to win by whatever means necessary. That includes marketing himself and his employees as high-minded truth-seekers and innocent victims of snotty liberalism -- much in the mode of old Nixon.

Yet neither Ailes nor his employees can always control themselves enough to hide their bias, as the world discovered last year when the Fox News boss uttered a revealing quip about the man who would become president. "[I]t is true that Barack Obama is on the move. I don't know if it's true that President Bush called [Pakistan President Pervez] Musharraf and said: 'Why can't we catch this guy?' " Ailes chortled at the annual dinner of the Radio and Television News Directors Association as he accepted their "First Amendment" award. His joke followed a lengthy series of "reports" on Fox News promoting the idea that the young Obama had attended a Muslim madrassa -- presumably to be trained for jihad -- in Indonesia.

The list of similar offenses is almost endless and, as it grows every day, selecting the most egregious examples can be challenging. Back in 2004, the wife of Carl Cameron, the channel's top campaign reporter, worked in the Bush reelection campaign, and Cameron himself posted material mocking Democratic nominee John Kerry. Over the years, the channel's news director John Moody has sent dozens of memos to the reporting staff, often tinged with GOP talking points, meant to ensure that whatever they produce has a pro-Republican slant.

With the advent of Glenn Beck as the prophet of protest, however, the drumbeat of partisan paranoia on Fox News is growing much louder. The cable channel heavily promoted the Beck-inspired Sept. 12 Tea Party protests against the Obama administration, with highly favorable live reports from Fox News correspondents, anchored by ... Beck himself.

In short, the Obama White House has ample reason to question whether Fox News Channel is a news organization that can be expected to treat a Democratic administration with fairness and balance. All they have accomplished so far is to inflame the right-wing base and renew the alliance of the Clinton era between right-wing media and mainstream outlets. Pundits and producers who claim to see no difference between their own outlets and Fox News are certainly entitled to express their opinions (and to insult themselves and their colleagues) as they see fit. But when they join the Fox chorus lumping Obama with Nixon, they need to be corrected.

Over the past few days, that false comparison has been made by Ken Rudin, the political director of National Public Radio, who called the Obama White House "Nixonesque"; by Karl Rove, who played a bit role in the Watergate saga as a Young Republican dirty trickster; and by Ruth Marcus, who likened Obama to both Nixon and his attack dog Vice President Spiro Agnew in the Washington Post -- a place where ignorance of the true history of the Nixon era is inexcusable. (Update: Ken Rudin emailed to make sure I saw his apology for the Nixon reference, which he called a "bone-headed mistake;" you can read about it here.)

But ignorance is epidemic on Capitol Hill and in the capital's newsrooms, so let's say this very simply: Nothing that Obama or any of his aides has done or said remotely resembles the war on the press waged by the Nixon White House until Watergate ended that administration's assaults on the Constitution. Nobody has sent Joe Biden out to question the patriotism of reporters and columnists who criticize the president, as Agnew did repeatedly. And nobody has tried to intimidate the media with obscene threats and tax audits, in the Mafia style of Nixon's aides.

On Fox News, the aggrieved correspondents, crackpots and crybabies now claim to be on an Obama White House "enemies list." Perhaps they mean to use the term metaphorically, but in the Nixon White House there was an actual list, compiled by Chuck Colson at the behest of John Dean. In August 1971, Dean wrote a memo explaining that such a list was needed "to maximize the fact of our incumbency in dealing with persons known to be more active in their opposition to our administration." This meant using "the available federal machinery to screw our political enemies."

Among those present on the original enemies list (which later morphed into a much longer second list) was Daniel Schorr, the eminent reporter who then worked for CBS News and now provides sage commentary on NPR. (Perhaps he can have a word with Rudin.) So Fox should stop whining about Nixon until a similar memo turns up bearing the name of Rahm Emanuel or Patrick Gaspard.

The Nixon gang began to go after journalists within months after the old reprobate took office and never stopped. In 1969, Dean ordered the Internal Revenue Service to initiate an audit of Newsday investigative reporter and editor Bob Greene, to avenge a series he had written probing the business deals of Nixon crony Bebe Rebozo. Then came the enemies list, which included Schorr and other journalists who were scheduled for similar harassment. During the 1972 campaign, Nixon aides hired Lucianne Goldberg (later the confidante of Lewinsky taper Linda Tripp) to spy on reporters aboard the press plane of Democratic nominee George McGovern. For a thousand dollars a week, she posed as a reporter for the Women's News Service, gathering salacious gossip for Nixon, mostly about who was sleeping with the stewardesses.

Lucianne's buffoonish spy caper only serves as a counterpoint to the far more sinister assaults on the Washington Post, which mounted in thuggish excess as the Watergate scandal unfolded. Marcus and her misguided colleagues could benefit from the educational account of those year provided by the late Katharine Graham in her memoir, "Personal History":

The investigation of such a tangled web of crime, money, and mischief was made much harder given the unveiled threats and harassment by a president and his administration. Bearing the full brunt of presidential wrath is always disturbing. Sometimes I wondered if we could survive four more years of this kind of strain.

The threats most famously included Attorney General John Mitchell's screaming warning to Bob Woodward that "Katie Graham is going to get her tit caught in a big, fat wringer" if the Post continued to investigate Watergate. But the campaign against the Post went much further. Nixon tried to persuade Richard Mellon Scaife (yes, the billionaire nemesis of Clinton) to buy the Post. On the White House tapes, he told aides that the Post would have "damnable problems" getting FCC license renewals for its Florida broadcasting properties -- and then two Nixon business cronies challenged the Post licenses, costing the company millions of dollars and precipitating a fall in its stock. Friends with administration ties warned Graham of possible violence against her.

Through those years, Graham held up bravely under incredible pressure until her paper triumphed. She is gone, but we all still owe her a debt of gratitude for courage under truly Nixonian fire -- along with the editors and reporters she supported. The bogus comparisons between those days and now are a dishonor to her memory and to the tradition of public service that she came to represent.