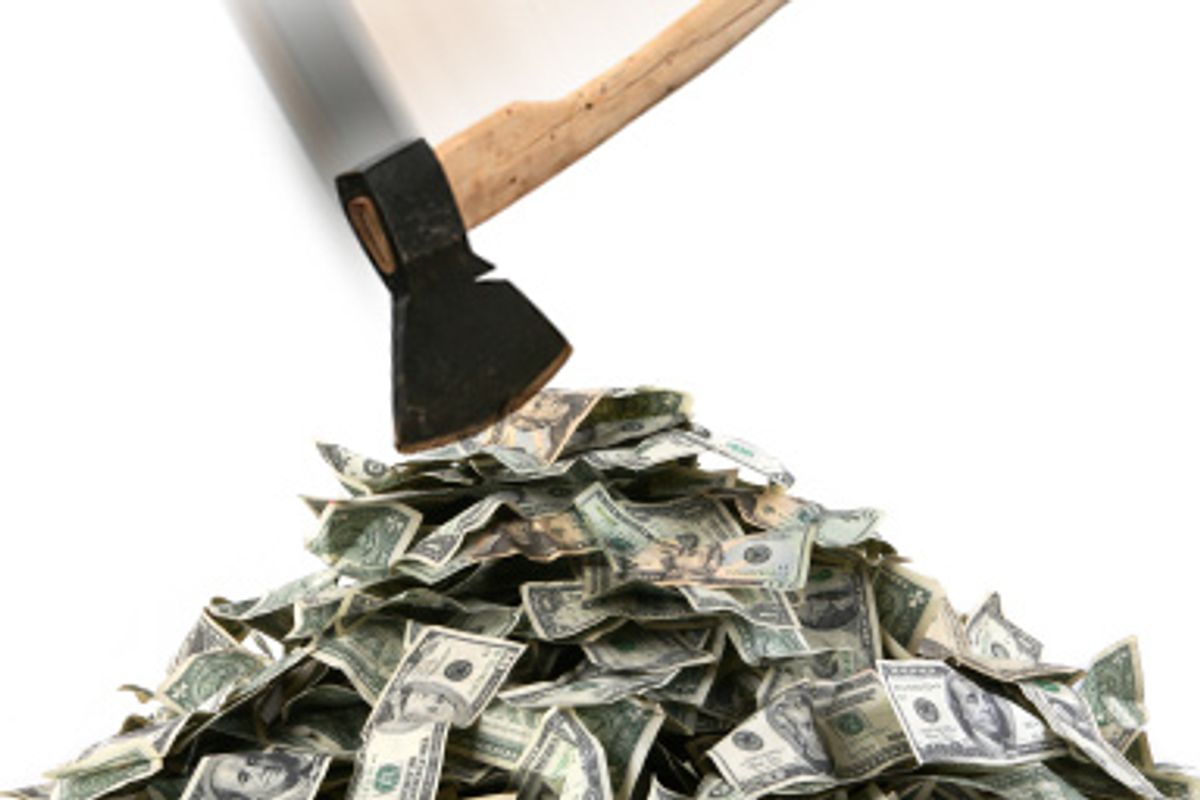 Comrades! Great news from the Kremlin. The pay czar, Comrade Ken Feinberg, has finally completed the assignment of crushing the bankers and the bourgeoisie that suffocates the working class. He has capped their pay at a mere $500,000 per year! Well, cash pay, that is; the capitalist swine will still be entitled to take company stock as part of their salary, and performance-related stock bonuses, which could make their total compensation significantly higher. But they will be prohibited from selling that stock for at least two whole years, comrades! Oh, and also, these new rules shall apply only to November and December's pay, and only to the 25 highest paid individuals at a grand total of seven companies, all of which received billions and billions of dollars in taxpayer assistance. But all of Wall Street shall be crippled as we planned! As Comrade Che used to say, ¡Hasta la victoria siempre!

OK, fine, so as a call to socialist revolution, the announcement Thursday by the Obama administration of new pay caps for recipients of "exceptional assistance" from the Troubled Asset Relief Program didn't turn out to be particularly inspiring. The caps will only apply to the car manufacturers and banks that got even more of a federal bailout than their competitors did, they won't force anyone to repay what they've already made this year, and they even carved out some exceptions for AIG executives who demanded they be paid the full bonuses their contracts entitled them to. Not only that, but some executives will still receive up to $9 million in "stock salary," that is, stock paid as part of total compensation, which can't be sold until two years later.

Feinberg, the Treasury Department's special master for executive compensation, cheerfully admitted he was powerless to do anything about any other companies whose pay scales are also completely out of touch with reality. Liberal observers like economist Dean Baker called the move "a good first step, but only a first step," toward restoring some sanity to compensation in the financial sector; the new rules would add up to nearly 90 percent cuts in cash compensation for most of the executives involved. And the White House made very clear that President Obama had nothing to do with the new regulations. "Hands off," press secretary Robert Gibbs said.

But none of that stopped right-wing critics of Obama's alleged march to totalitarianism from piling on. "This is fascism," Rush Limbaugh burbled on his radio show. "They're still privately owned, but they're being run by who? Not even Obama, we're told. The freaking pay czar, who doesn't even have to tell Obama what he's doing. So he doesn't have to stop at the execs; he can limit the pay of the janitors. He can limit the pay of anybody he wants, and pretty soon it's gonna spread beyond companies that took TARP money." Fox News posted a lengthy article wondering whether Feinberg even had the legal power to set the pay caps, though there's broad agreement elsewhere that he does. "If bankers don't challenge this, if they supinely accept it out of fear of what the government will do if they do challenge ... then you have a nation of sheep," Fox's legal analyst, Andrew Napolitano, said.

Corporate critics chimed in, too. One person "close to" the board of directors at AIG -- the insurance behemoth for which the federal government has made available $182 billion in tax money -- told the New York Times the pay cuts were simply unacceptable. Some executives there will face annual salaries of $177,799 or -- gasp! -- a mere $125,000, under the new rules. "That's insulting," this person, whoever it was, said about the money that's mostly only available because the taxpayers bailed out the firm in the first place.

Keep talking about how anything under $200,000 is an insulting annual salary, of course, and you won't find yourself with too many friends left at the end of the day, especially with unemployment hovering around 10 percent. Which might be why most elected Republicans restrained themselves from plunging off the cliff along with Limbaugh, and stayed quiet about the pay rules.

"The White House is perfectly aligned with voter sentiment on this," said GOP strategist Kevin Madden, citing "Main Street anger at Wall Street." It's hard to defend multimillion-dollar salaries these days. "That's going to make those that are traditionally defenders of the free market somewhat reticent to really go out and give an amplified defense of Wall Street compensation practices."

So the main GOP talking point was a muted reminder that many conservatives opposed TARP to begin with. "I hope taxpayers realize that the only way they ever end up subsidizing offensive executive salaries is when the government bails out the executives and the companies they run in the first place," said Rep. Jeb Hensarling, R-Texas, a fierce critic of the entire program. "This should be yet another example of why we should terminate TARP at the end of this year."

As it happens, terminating TARP is actually part of the point of the pay rules, though probably not on Hensarling's schedule. In designing the new compensation schemes, Feinberg said he was motivated mostly by one goal: getting the taxpayers' money back. With the new rules, the theory goes, the executives will have their financial interests lined up with the taxpayers' -- the more money their companies make, the quicker they can pay back their TARP funds, and also, the better the executives' stock portfolios will look. By forcing executives to keep their stock for a few years, the Treasury hopes to encourage firms to build for the long term, not for short-term profits, and to keep executives from immediately sloughing off any negative consequences of their actions by selling out quickly. "The taxpayers are in deep with these seven companies," Feinberg said. "And one of my primary obligations is to see to it that the taxpayers' dollars are returned to the U.S. Treasury ... What I do not accept as a priority is vindictiveness or punitiveness."

That's not to say they might not have deserved some vindictiveness. All seven of the bailed-out companies originally sought to pay their executives more than Feinberg was willing to approve, he said. Feinberg's decision, though, is essentially final; they can appeal the compensation structure he put in place instead of what they proposed, but the appeal is heard by Feinberg. Still, only one company had the nerve to insist on paying bonuses set up under the old pay system: AIG, which said it should honor contracts that will pay out millions to traders. Since the contracts were valid, Feinberg said, he agreed to let them.

In the end, the rules may not wind up doing much to soothe taxpayer outrage over the whole bailout situation. After all, the executives are still taking home paychecks that dwarf what the average American earns. And it's not clear whether any other companies will get on board with the Treasury plan unless they're forced to. "I'd like to think that these standards ... will be adopted voluntarily, picked up by the marketplace," Feinberg said. Good luck with that one, though. "In general, they're not very well received by the other financial services companies," Jim Reda, a consultant on executive pay, told Salon. "The long arm of Feinberg is not as long as he'd like it to be." Or, probably, as long as most people who don't work for an investment bank would like it to be, either.