"Star Trek": Coming to a theme park near you! 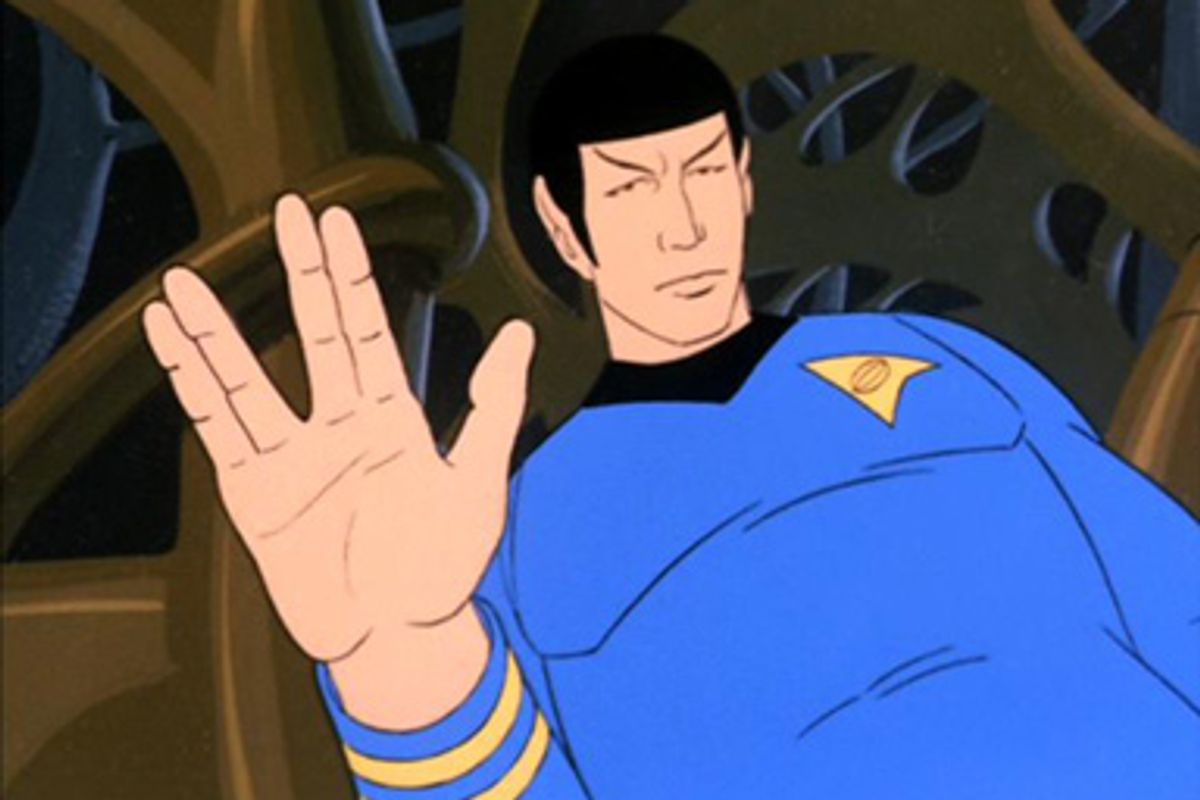 A still from "Star Trek: The Animated Series"
-- A still from "Star Trek: The Animated Series"

Gene Roddenberry must be spinning in his grave. Or he would be if he had one; his ashes were shot into space in 1997. (Wait, I'm confused. Does that mean he's always spinning in his grave?) With Roddenberry and his wife, Majel Barrett Roddenberry (Nurse Chapel in the original "Star Trek"), now both dead, control over the "Star Trek" franchise has devolved onto a slithery nest of interlocking corporate interests. Which accounts for a troubling press release I received on Friday, announcing the creation of something called "Star Trek Live."

Although the "Trek" franchise presumably has renewed Hollywood viability after this summer's lively and successful J.J. Abrams prequel -- the 11th "Star Trek" movie overall -- it long ago entered a decadent phase of creative and marketing metastasis: Spinoffs producing spinoffs, actors becoming directors becoming authors. (I'm still waiting for a film version of "Star Trek: The Animated Series," or a Web-only series based on William Shatner's co-authored "Trek" novels. Somebody's probably working on them.)

That provides some context for the genesis of "Star Trek Live." But what the hell is it, exactly? My first guess, while cagily inspecting a press release that's crammed with merchandising buzzwords and light on specifics, was that somebody who hadn't been reading the paper lately was following through on some three-year-old scheme to launch a "Star Trek" Broadway musical. Now, that sounds like a pop-culture disaster of heroic and delicious proportions, so I'm sorry to report it isn't happening. With discretionary spending in free fall and the recent closure of "Shrek: The Musical," Hollywood studios are backing away from the Great White Way as an ancillary revenue stream.

No, "Star Trek Live" is something else, "an interactive stage show" that's "targeted for a run in theme parks and performing arts centers across the country." The show "combines cutting-edge special effects, unmatched audience interaction and an exploration of real space-age technology," taking "audiences of all ages on an exhilarating journey with Captain James T. Kirk and Vulcan science officer Spock."

Yeah, I know what you're thinking. You're thinking: ZOMG! This is what Roddenberry's atheist-Apollonian vision of the future has come to! Unemployed dinner-theater actors in Kirk and Spock drag and plastic tricorders, doing a laser show for the kiddies! At Waldameer WaterWorld in Erie, Pa.! It will bear the same relationship to any actual "Star Trek" incarnation as that teeny-tiny Stonehenge in "Spinal Tap" bears to seeing Led Zeppelin play live in 1973! And you're absolutely right.

OK, OK, let me pay some lip service to journalistic fairness by reporting that "Star Trek Live," while a property of CBS Consumer Products, will actually be created by the Mad Science Group, a "science enrichment provider" that creates shows for schools, camps and other youth venues. It'll be some kind of hybridized edutainment product, in which Kirk and Spock train a fresh group of "Starfleet cadets" on their first day at the Academy. Learn, learn, learn; science, science, science. But wait, enough of that, shorty -- the Earth is under attack from unknown aliens! Put down those curly fries and shoot those bastards!

I'm not backing off my initial, bigoted assumption that this latest bastardized effort to grub a few more dollars off a canceled 1960s TV series is an idiotic debasement of the already-flaccid "Star Trek" legacy. But, hell, that's nothing new. And let's face it, fellow parents: If these people can bottle even 0.5 percent of the Trekker spirit, in a package that appeals to the science-nerd kids who are too chicken for the vomitous coaster rides, we'll all be grateful. If they can end it with a group line-dance number -- hopefully led by "Kirk" and "Spock" doing the Robot -- I take back everything I just said.

Beyond The Multiplex Movies Science Fiction And Fantasy Star Trek