From the Voltaggio brothers of "Top Chef" to Don Draper of "Mad Men," grandiosity and swagger make good TV 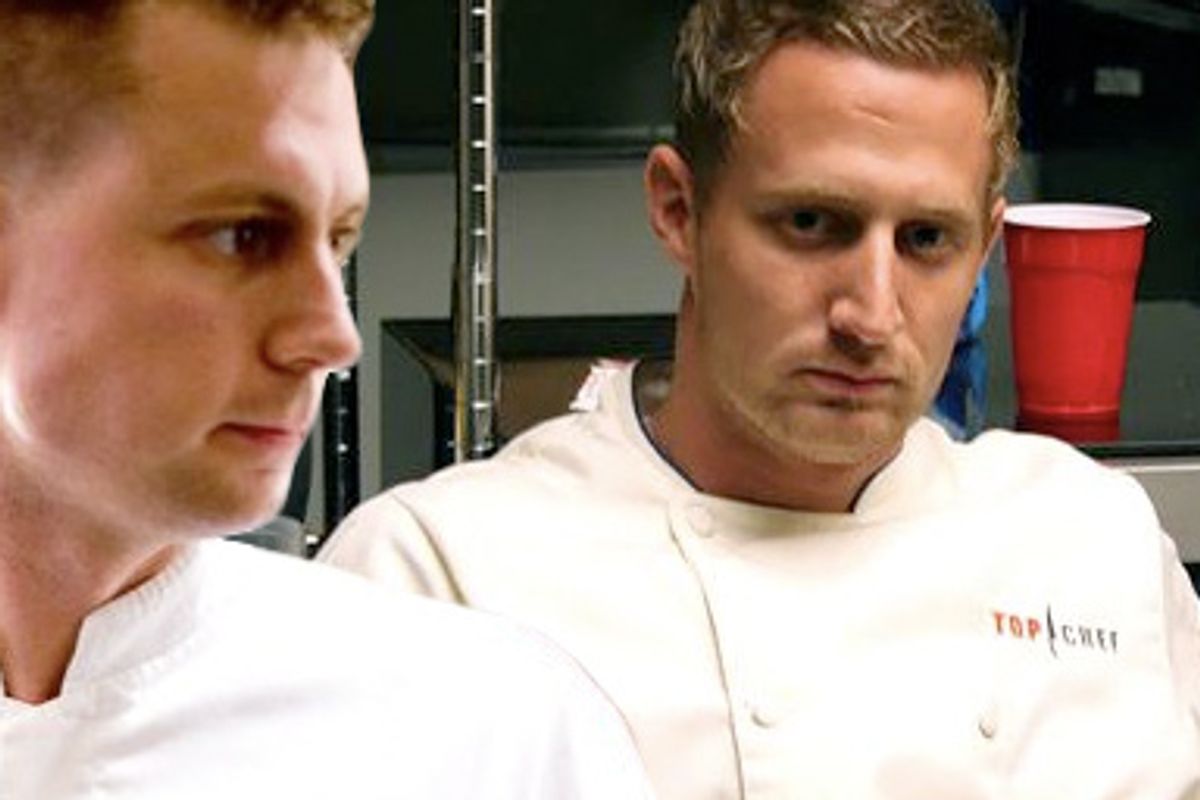 Arrogance is telegenic. Who knows why? Ask Don Draper or Tom Colicchio or Jack Donaghy or Tony Soprano. Ask Oprah or Al Swearengen or Ted Danson or Vic Mackey or Grace Hanadarko or Clay Morrow.

Whether it's "Sons of Anarchy" or "The Amazing Race," whether it's "The Mentalist" or "Project Runway," the last thing we want, at the end of a long day at work, is to relax by watching insecure people second-guess themselves. The heroes of the small screen are the ones with the biggest egos.

Take the Voltaggio brothers of "Top Chef: Las Vegas" (10 p.m. Wednesdays on Bravo). These two self-assured but growly young men don't take kindly to either flaccid flavor profiles or incendiary comments in the Glad Torture Chamber. It was obvious from the start of the sixth season that these snarling siblings had the chops to make it to the final three. What was less obvious was the extent to which they might let their clashing personalities and lifelong resentments and deeply competitive natures rise to the surface and engulf them in a stormy sea of unspoken contempt, sullen silences and occasional spitty outbursts.

Who knew that younger brother Michael would have such an amusing tendency to blow up at his far more reserved elder, Bryan, squawking, "Fuck you, Bryan!" and also, "I'll take my time now, you fucking asshole," and, my personal favorite, "Don't be a dick"? That's classic brotherspeak, a baseline instruction to watch your step lest you get popped in the face by a stray fist. And make no mistake about it, it has come to blows with these two before. Every time Bryan mumbles something condescending then averts Michael's gaze, I can almost see a 10-year-old Bryan making some snide, superior comment in passing that turns a 7-year-old Michael bug-eyed with rage and sends him flying across the room, hands aimed at Bryan's holier-than-thou neck, ready to choke the life out of the smug bastard.

All of which merely means that the Voltaggio brothers are actually brothers and not paid actors or talented chefs posing as brothers to make it onto the show. Still, it's a testament to how completely Michael has dropped his guard that suddenly he's freaking out while the cameras keep rolling.

Which brings us back to some of the possible reasons why arrogance lights up the small screen like nothing else. Whether or not they feel comfortable with the spotlight, whether or not they approve of broadcasting themselves for a nation's idle amusement, the arrogant sooner or later come to adore the camera's gaze in spite of themselves. At first, since they're arrogant, they make pronouncements about how they'll resist the pitfalls of fame and notoriety, how they'll lead with their dignity, how they'll bestride the pathetic shenanigans of their colleagues like great golden gods. Witness how recently Michael stated with great conviction, "Yelling and screaming, arrogance and things like that? There's really no place for that in the kitchen." And now? He yells and screams with reckless abandon.

But he can't help it! His arrogance lies to him, telling him that even when he falls apart and stomps his feet like a bratty little tool, the camera loves him and embraces his every move. And let's face it, the guy is pretty hot. He has angry bedroom eyes. He's cocky. He cooks a mean pressed chicken with calamari noodles, tomato confit and fennel salad. If this guy isn't neck-deep in fine women around the clock, there is no God.

It's no wonder he gets under older brother Bryan's skin. Bryan, who has appeared relatively peace-loving until last week's episode, nonetheless has a disconcerting tendency to blow up at anyone who tries to make polite chitchat with him in the Glad Torture Chamber. State an opinion about which dish sucked the most, ask Bryan what he thought about how another cheftestant performed, speculate about who might be going home, and Bryan will bite your head clean off. He doesn't want anyone gossiping about anyone else. His commitment to accuracy, to squelching the slightest whiff of gossip, is so complete, you'd think he was a highly decorated investigative reporter on a fact-checking mission, as opposed to, say, a reality show contestant. Sometimes, in fact, when Bryan says things like, "Did you taste that dish?" and "Were you there?" you almost want to say, Jesus, Bryan, give the postproduction editors a break, will you? What are they supposed to make a show out of? Shots of you, pursing your lips in silence? This is Bravo, dude.

But last week, after that little hotheaded pussy hound Michael won the elimination challenge plus $10,000, then uncharacteristically offered to share his money with his team, Bryan couldn't restrain himself. He sat in the Glad Rage Pantry in silence until Michael couldn't help  commenting on his obvious anger. Then Bryan quietly informed Michael that he could keep his share of the prize money. I don't want your blood money, his eyes told Michael. It was like a scene out of "Jesus Christ Superstar," only with higher stakes.

"I think the two dishes he executed were great, but he'll admit he's a bit of a control freak," Bryan told the camera, sounding like a bit of a control freak, then adding, "And I'm tired of his unprofessional behavior being rewarded." Aww! Big brother hates how little brother's grandiosity and temper tantrums have landed him flashy prizes and loose women for decades now! It's sooooo no fair!

But don't judge Bryan. After all, don't we all feel a little highhanded when we notice how grandiosity and temper tantrums are not only telegenic, professionally expedient and disconcertingly lucrative, but also sexy? Don't we all feel a little threatened by the ways that pissy little braggarts and smug jerks get all the cash and the hot girls, while the rest of us sit on our hands, restating our principles and values as the camera crew races over to get more footage of the outspoken dick across the room -- you know, the one who just happens to be our slightly-more-handsome little brother?

In short, the "Top Chef" producers' decision to include siblings on the show who also happen to be celebrated professional chefs guaranteed to blow away the competition while fighting like enraged squirrels looks less like a crass manipulation and more like an act of sheer brilliance every day.

"You know, why don't you keep the whole thing, if you're so mad?" Michael sulkily asks his brother back in the Glad Seething Storeroom.

"I'm not mad at all. I'm very happy about this whole situation," Bryan hisses through gritted teeth, the poster child for Passive-Aggressive Seething Glad-Wrapped in Gladness.

In a fitting denouement, wishy-washy Laurine is sent packing while explaining to the camera that on "Top Chef," "I think I've learned something about myself, and uh, I don't know that I want to be in a competition with anybody for anything, really." Now we know why Laurine was always vaguely chafing on-screen: She's humble, she hates the attention and she doesn't like to compete.

We may understand how she feels, but that doesn't mean we aren't happy to see her go. Quivering worrywarts and jittery second-guessers? Stay home. We prefer eye-rolling braggarts and scoffing, swearing jerks on our screens instead, thank you very much.

Now think of the ever-paradoxical Don Draper (Jon Hamm) of "Mad Men" (10 p.m. Sundays on AMC). He pretends to be reserved, principled, unflappable, consistently self-assured, but Don's smooth, arrogant exterior barely conceals the roiling mess of insecurities and identity issues churning just under the surface. Don isn't the uncomplicated hero and all-seeing prophet he claims to be at work and at home. He plays the part of the dependable family man but keeps a big pile of cash in his desk drawer in case he needs to skip town. He acts as a trustworthy mentor to Peggy (Elisabeth Moss), until the moment when she needs his guidance and, feeling pressured by his employment contract, he turns on her. He builds a friendship with Roger Sterling (John Slattery) until Roger has the bad taste to leave his marriage, and Don, who's obviously envious, lashes out and calls Roger foolish instead of admitting the truth to Roger or himself.

Don's arrogance -- which like most arrogance is fueled by a vast array of insecurities that our arrogant hero refuses to acknowledge -- prevents him from seeing himself or his world clearly. Instead of becoming the man he pretends to be, choosing to embrace his responsibilities as a good father and devoted husband, or even leaving Betty once and for all and settling down with the smart, lovable schoolteacher of his dreams, Don continues to pull one over on the world. In his initial brusque manner with the schoolteacher's epileptic brother, we can see it clearly: Don wants no part of weakness. He can't stand to play any role in some loser's sob story. He can't tolerate so much as considering this man's plight in life, since it bears such a haunting resemblance to his own checkered past, and reminds him of his poor, dead brother, the one he refused to help or even acknowledge years prior.

Don tells himself he's turning over a new leaf by slipping the brother some money and dropping him off in the woods instead of taking him to the job his sister lined up for him in Bedford. But really this is more of the same: Don playing fast and loose, thinking on his feet. Don uses his money as a replacement for genuine concern, just as he uses sex as a stand-in for real love and intimacy. His essential instinct for dishonesty is what keeps him from ever forging a real connection with the women in his life. He considers himself above them, ultimately, and he seems to feel that he's licensed to make his own independent decisions about anything -- the epileptic brother, Salvatore's choice not to whore himself to a client and his subsequent dismissal, Peggy's request for a promotion -- even when the decisions aren't really his to make.

But Don will not be king for much longer. The times are changing. Betty has just discovered his little box of secrets, and now that she's had a chance to stew over it, thanks to Don's not coming home that night, she's liable to keep her mouth shut while carefully planning a colorful and catastrophic exit. What kind of precipitous fall lies ahead for our dashing, overconfident hero Don Draper, or for those volatile, versatile Voltaggio brothers?

We can't wait to find out. Because if there's one thing that's more dramatic and powerful than arrogance on TV, it's watching the arrogant finally get trampled underfoot by their own barely concealed insecurities.

I Like To Watch Mad Men Television Top Chef