Memo to grammar cops: Back off! 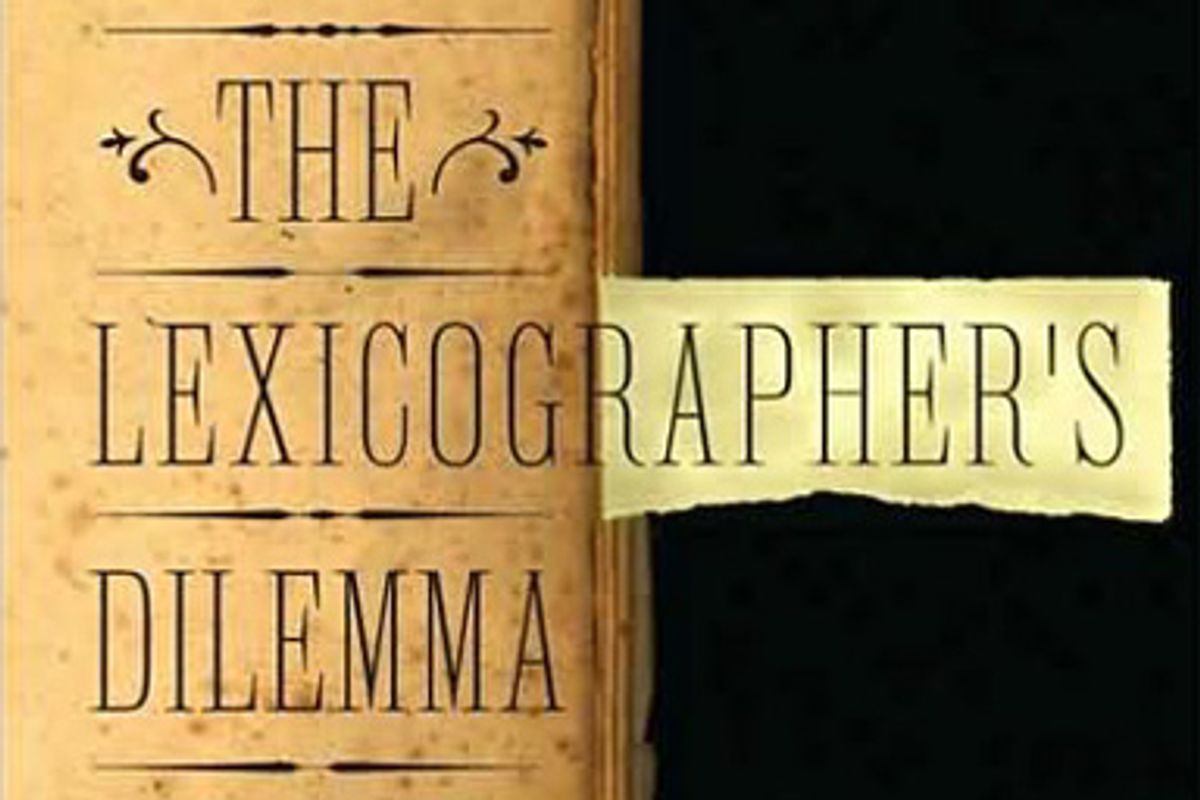 "Passions run hot when the discussion turns to language," writes Rutgers English professor Jack Lynch in his sprightly new history of the notion of "proper" English, "The Lexicographer's Dilemma." "Friends who can discuss politics, religion and sex with perfect civility are often reduced to red-faced rage when the topic of conversation is the serial comma or an expression like more unique." Ain't it the truth? My favorite call-in radio program regularly invites "word maven" Patricia T. O'Conner to come on and talk about new and old figures of speech. O'Conner clearly prefers to marvel over the language's diversity, but the half-hour is inevitably eaten up by people kvetching about their pet peeves, more often than not some barely detectable error or non-infraction that makes the caller apoplectic -- such as the phrase "gone missing," which is "perfectly standard," according to Lynch. But who am I to mock? I, who have gnashed my teeth countless times over the dangling participles that abound on NPR!

Lynch would like us all to calm down, please, and recognize that "proper" English is a recent and changeable institution. "The Lexicographer's Dilemma" recapitulates the long argument between two schools of thought: the prescriptive -- which holds that the job of language experts is to lay down the law by telling us how to speak and write -- and the descriptive, which holds that compilers of dictionaries and other guides are in the business of describing, not dictating, how the language is used. The latter group includes most professional linguists and lexicographers, but the former -- self-appointed pundits like the late William Safire and Lynne Truss, author of the bestselling rant about punctuation errors, "Eats, Shoots and Leaves" -- know that the real money lies in validating the ire of purists.

According to Lynch, the very notion of correct English is only 300 years old; in the days of Chaucer and Shakespeare, the idea that native English speakers could be accused of using their own language improperly would have seemed absurd. The advent of printing -- and, especially, the growth of general literacy -- led to efforts to establish authoritative standards of spelling and usage in the 18th century. Scholars known collectively as "the 18th-century grammarians" have, in some accounts of the language's history, been set up as "dastardly, moustache-twirling villains and mouth-breathing, knuckle-dragging morons," who attempted to impose a lot of arbitrary restrictions on English grammar. Their most notorious crime was the prohibition against split infinitives.

Lynch takes a more temperate view of these "bad guys," as he does of most matters discussed in "The Lexicographer's Dilemma." While he leans decidedly toward the descriptivist camp, he believes experts ought to acknowledge the public's need for guidance on how to speak and write standard English -- that is, the lingua franca of official, public and commercial life in the English-speaking world.

Which brings us back to those split infinitives, the most famous of which is spoken by William Shatner in the opening credits of the TV series "Star Trek": "To boldly go where no man has gone before." The infinitive form of any English verb almost always consists of two words: "to go," "to eat," "to walk," etc. The idea that those two words ought to be treated as a single, inseparable unit derives from the fact that in Latin the infinitive is one word. The imposition of Latinate grammar on English -- the edict against ending sentences in a preposition is another example -- is what the 18th-century grammarians have been condemned for by more liberal-minded linguists.

Lynch does think that English speakers should be taught to avoid splitting infinitives in certain situations, not because splitting them is incorrect, but because other people, people in a position to judge and exclude, have been taught it's incorrect. The ability to speak and write standard English gives students "access to power," he writes. It's a membership card required for participation in the culture's important conversations. But that doesn't mean that standard English is necessarily superior to, say, African-American Vernacular English (AAVE or, to use a more notorious moniker, Ebonics), or that deviations from it constitute the downfall of civilization as we know it, as popular curmudgeons of Safire's ilk like to proclaim.

"Correct" English, as Lynch characterizes it, is basically "the English wealthy and powerful people spoke a generation or two ago." And sure enough, the first guides to English usage promised to teach people to write and speak with greater "elegance" and "politeness," not greater correctness. These manuals, born of an age of increased social mobility, were intended for "a newly self-conscious group of people who were no longer peasants but still were excluded from the traditional aristocracy." The suddenly rich children of merchants and manufacturers needed instructions on the elegant grammar (and manners) of the aristocracy in order to blend in with their social superiors. Tellingly, the 300-year history of fulmination against improper usage is marked by diatribes against those "inferior" and upstart groups supposedly most prone to transgression: women, young people, racial and ethnic minorities and, of course, Americans.

To protests that the language police are only protecting the accuracy, precision and clarity of our tongue, Lynch lifts a skeptical eyebrow. Many of the most roundly deplored "debasements" of English are nevertheless perfectly comprehensible: I didn't confuse you by writing "Ain't it the truth?" in my opening paragraph, did I? The only truly unbreakable rules of grammar and usage are the ones that, when broken, result in a genuine failure to communicate. The rest is a form of covert class warfare, and today's usage reproofs constitute a status-protecting thump on the head delivered by the upper middle class to uppity members of the lower middle.

Thinking of the grammar wars in this light helps explain why they provoke such rage. Much as some people might detest seeing the noun "impact" used as a verb, if a lot of people say it and almost everybody understands it when it's said, then a coup has been effected. The "verbing" of nouns (or the creation of "nerbs") has been a flashpoint for the past four or five decades with the growth of business management lingo. Complaints about this point to a particularly American social fissure: between the cultured sensibility of the liberally educated and the can-do utilitarianism of striving MBAs.

Does it help to know that the foremost Victorian grammar cop regarded "donate" as "utterly abominable" and "inaugurate" as "high-flying nonsense"? It is in the nature of language to change, and while teaching people to use standard English may help get them into a boardroom or cabinet chamber, chances are they'll teach English itself a few new tricks by the time they get out, not necessarily for the worse. For every groaner like "mentee" (i.e., "protégé"), there are awesome coinages like "aerobicized," "blowback" and "crunk" -- all recently added to the "Concise Oxford English Dictionary." Also, I rejoice to learn that "whom" (the objective case of the pronoun "who") may soon vanish from written English just as it has nearly vanished from casual speech, and students will have one less tedious rule to memorize. But dangling participles? Those I'll fight 'til the bitter end.