Senate Majority Leader Harry Reid will include a government-run plan in reform, a big win for progressives 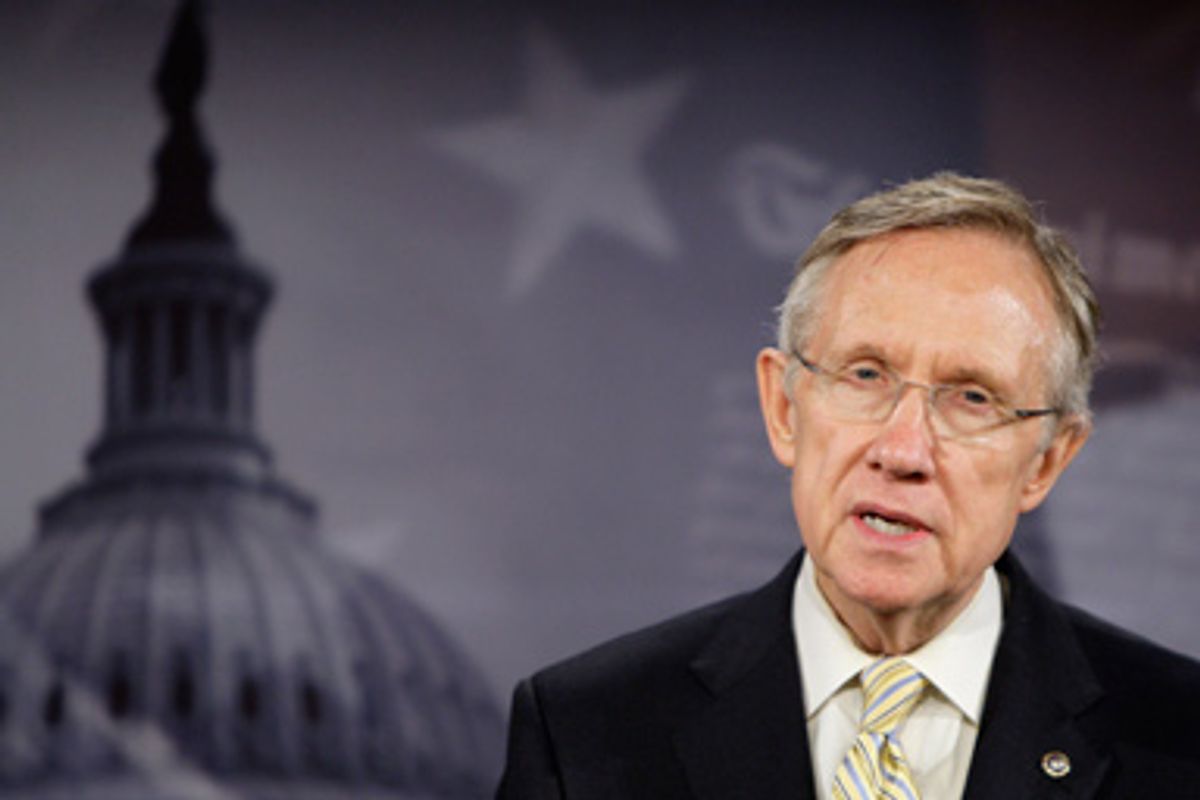 The Senate healthcare reform bill will include a public health insurance plan that states can opt out of, Democratic leader Harry Reid announced Monday -- dealing a blow to insurance industry lobbyists who had hoped to kill the public option altogether.

"While the public option is not a silver bullet, I believe it's an important way to ensure competition and to level the playing field for patients with the insurance industry," Reid said. "All the national polls show a wide majority of Americans support the public option. I think it's important that the matter that we work on in the Senate have a public option in it."

The move makes it far likelier that the public plan, a key element of reform to most progressives, will survive the legislative process in some form. But it's not quite guaranteed. Reid dodged questions Monday about exactly how many votes he had lined up to support the public option; Republican Olympia Snowe of Maine, for instance, has said she'd prefer a public option on a "trigger," which wouldn't take effect immediately, and several conservative Democrats might fall in line behind her. Democrats control 60 votes in the Senate, but if any of their conservative members peel off, they might not be able to bring a bill with a public option in it to the floor for debate.

Aides in Congress had said the White House was a little reluctant to go with the opt-out public option if that meant alienating Snowe, though an Obama advisor wrote Sunday night on the White House blog that that isn't true. But by Monday, any reluctance appeared to have vanished.

"While much work remains, the president is pleased that at the progress that Congress has made," White House press secretary Robert Gibbs said in a statement issued just after Reid's press conference. "He's also pleased that the Senate has decided to include a public option for health coverage, in this case with an allowance for states to opt out. As he said to Congress and the nation in September, he supports the public option because it has the potential to play an essential role in holding insurance companies accountable through choice and competition." Reid said he had the administration's backing, too.

Progressives appeared to be pleased by the announcement. "Over the last several weeks, Senate Majority Leader Harry Reid was forced to choose between the urgent need that everyday Americans have competitive choices when they buy health insurance or the insurance industry pressure to maintain its stranglehold on our health care," said Tom McMahon, executive director of Americans United for Change, a group that's been pushing for a public option. "Senator Reid's announcement that the Senate healthcare bill will include a public health insurance option shows that he has refused to buckle in the face of withering pressure from the big insurance companies and sided instead with everyday healthcare consumers." Health Care for America Now, a union-backed reform organization, also praised Reid's decision.

Republicans, meanwhile, didn't wind up liking the reform plan any more than they already had. "Wholly aside from the debate over whether the government gets into the insurance business, the core of the proposal is a bill that the American public clearly does not like, and doesn’t support," said Senate GOP leader Mitch McConnell. That's not actually true -- depending on how the question is phrased, polls show a majority of voters still do like the plan, and it's gotten more popular since the summer.

The move was a stark reminder that the daily cable news "wisdom" doesn't always last for more than a few hours. The public option was widely considered to be dead after the summer; when the Senate Finance Committee didn't include any type of government-run plan in its own healthcare bill, that conventional wisdom solidified even more. But the insurance industry appeared to overplay its hand earlier this month, commissioning an easily debunked study to argue against the reform plan. And pressure from progressive groups helped keep Democratic leaders from ditching the plan in the end.

The House is still weighing what type of public option to include in its own bill -- one that pays doctors and hospitals on a fee schedule based on Medicare rates, or one that negotiates directly to set its own prices, much like private insurers do. The Senate must still vote on Reid's proposal, and then both chambers will have to negotiate on how to combine the bills if they each pass their own version. But momentum is now clearly on the side of reform, and on the side of reform with a public option.