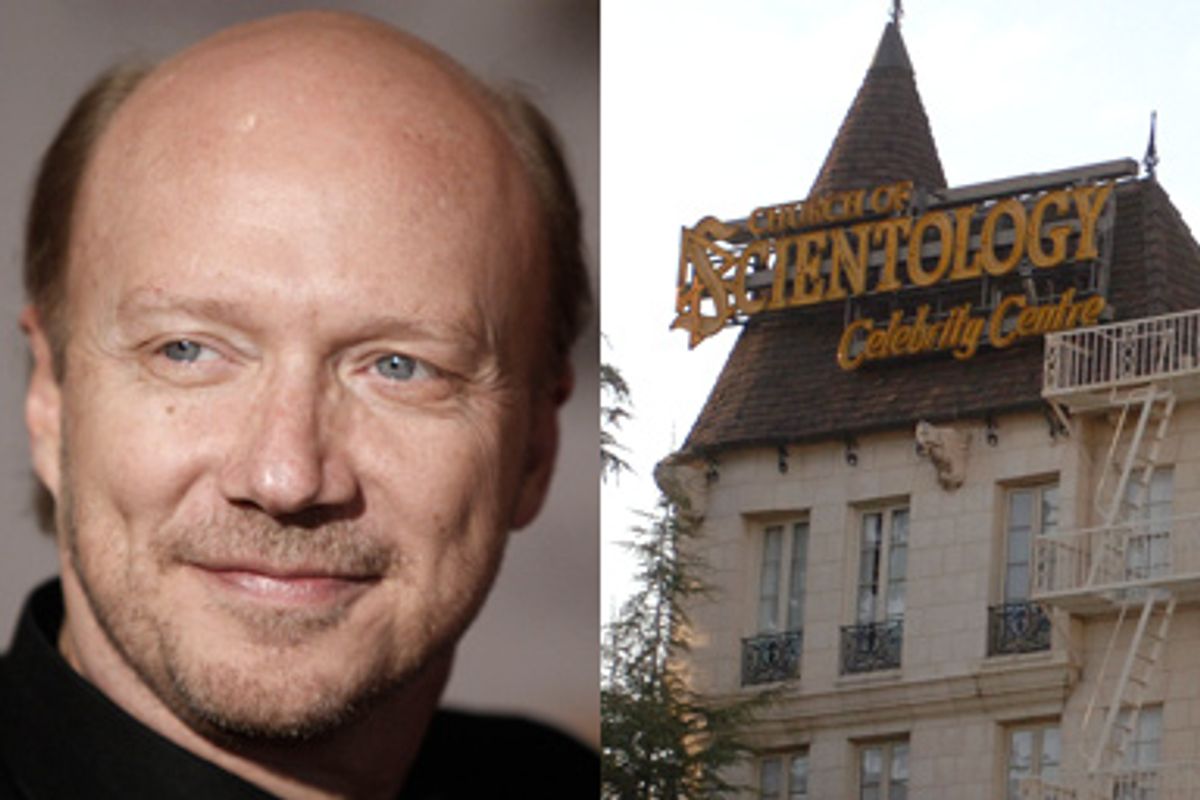 When Paul Haggis, the writer of "Million Dollar Baby" and "Crash," kicked his faith to the curb after 35 years, he did so as only an Oscar-winning scribe could: with a badass screed. His resignation letter, dated Aug. 19, emerged on ex-Scientologist Mark Rathburn's blog yesterday and promptly went viral.

In his letter, Haggis explains, "for ten months now I have been writing to ask you to make a public statement denouncing the actions of the Church of Scientology of San Diego. Their public sponsorship of Proposition 8, a hate-filled legislation that succeeded in taking away the civil rights of gay and lesbian citizens of California -- rights that were granted them by the Supreme Court of our state -- shames us." Though the Church claims not to dictate personal sexual practices and has several openly gay members, it's perhaps no coincidence that Scientology also has a reputation as Hollywood's biggest closet, with gay rumors persistently dogging famous members like Tom Cruise and John Travolta.

Even before Haggis' resignation came to light, it had not been a good week for the Church's public relations. On Friday, ABC's "Nightline" aired a scathing investigation of celebrity Scientology by gotcha journalist nonpareil Martin Bashir (of the infamous Michael Jackson interview). The Church's high-profile membership, its secrecy and unusual practices -- which Salon explored extensively back in 2005 -- have long made it a subject of fascination and disdain.

But the real corker of the recent "Nightline" story came when Bashir brought up founder L. Ron Hubbard's most confidential -- and controversial -- doctrines.  Many organized religions sound like so much sci-fi gobbledygook to outside ears, but Scientologists aren't known for their generous senses of humor on the subject. And so, when Bashir asked Church spokesman Tommy Davis the age-old question, "Do you believe that the galactic emperor called Xenu brought his people to earth 75 million years ago and buried them in volcanoes?" Davis immediately became defensive. "I am not going to discuss the disgusting perversions of Scientology's beliefs … things that are so fundamentally offensive for Scientologists to discuss." When Bashir gently tried another tactic, asking about L. Ron Hubbard's personal beliefs in Xenu, Davis unclipped his microphone and stalked off.

Davis, the son of actress Anne Archer (perhaps best known for her role in "Fatal Attraction"), has a history of getting huffy about the whole Xenu thing. Two years ago he stormed off an interview with Britain's Panorama, saying, "I'm angry. Real angry." And last year, he responded to a question about "alien parasites" on CNN by chortling, "Does that sound silly to you? It's unrecognizable to me." But in an interview for KESQ last March, Davis did cop to being "familiar with" "the confidential scriptures of the Church."

Davis is also well known to the Church's newest ex-member, Paul Haggis: It was to him that Haggis addressed his resignation letter. In it, Haggis cited not just the Church's support for Proposition 8 but the church's policy of disconnection -- the practice of forcing members to cut off ties to anyone it views as enemy of the Church -- which Davis recently denied to CNN.

"You said straight-out there was no such policy, that it did not exist," Haggis wrote. "I was shocked. We all know this policy exists. I didn't have to search for verification -- I didn't have to look any further than my own home. You might recall that my wife was ordered to disconnect from her parents because of something absolutely trivial they supposedly did twenty-five years ago when they resigned from the church ... To see you lie so easily, I am afraid I had to ask myself: what else are you lying about?"

The Church of Scientology has been accused of taking a harsh and punitive stance toward those who speak against it. Haggis himself acknowledged it in his letter, noting, "I was truly disturbed to see you provide private details from confessionals to the press in an attempt to embarrass and discredit the executives who spoke out ... You took Amy Scobee's most intimate admissions about her sexual life and passed them onto the press and then smeared them all over the pages your newsletter! ... So, I am now painfully aware that you might see this an attack and just as easily use things I have confessed over the years to smear my name. Well, luckily I have never held myself up to be anyone's role model."

Though the Church of Scientology has not yet spoken about Haggis' departure, the man who wrote a movie about a prizefighter seems comfortable with the possibility of battle.  As for Tommy Davis, it may be a bad time to be an ex-Scientologist, but it's an even worse one to be their spokesman.

UPDATE: And it just keeps getting bleaker. On Tuesday a French court convicted the Church of organized fraud and fined it 600,000 euros (roughly $900,000), ruling that it had "harassed" its members into parting with large sums of money. On the bright side for Scientology, the court rejected the prosecution's request the Church be banned entirely.

Before you leave in a huff, here are a few of Tommy Davis' greatest hits.