You'd never know it from the MSM, but he deserves high grades for his work so far in Iran, Iraq and Pakistan 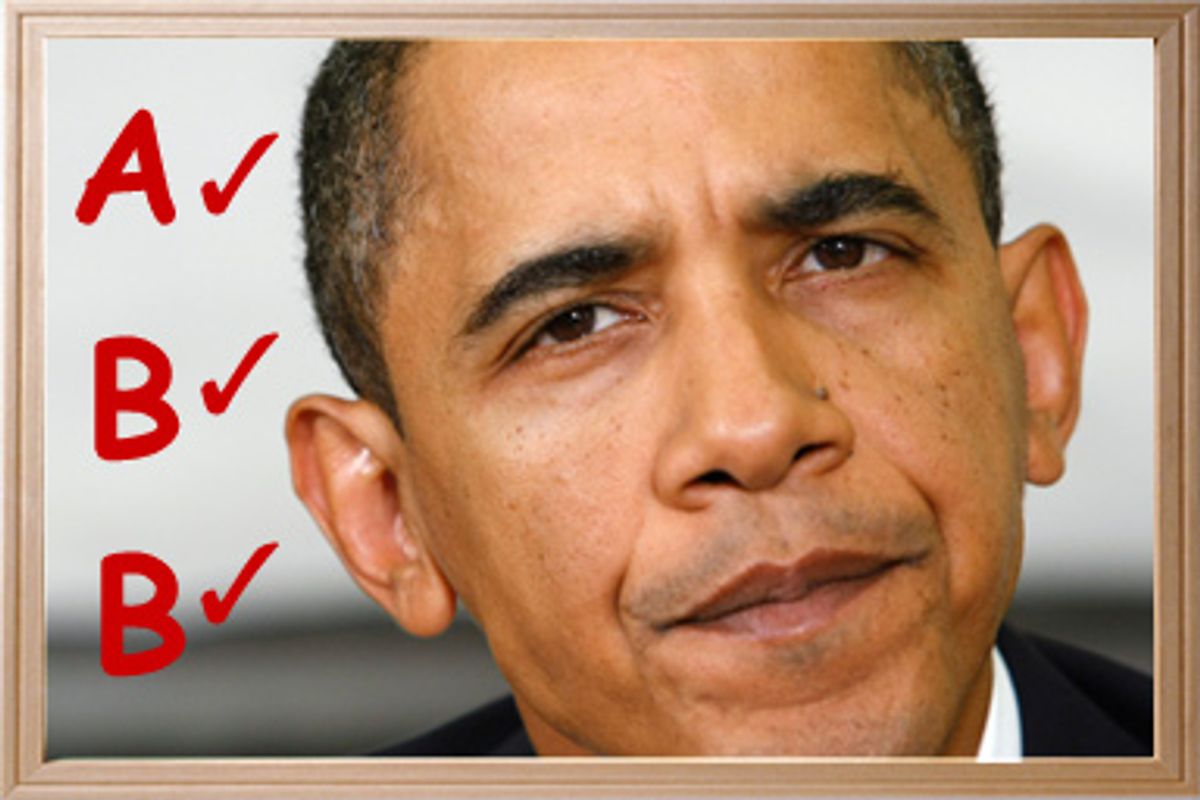 Why can't the administration of President Barack Obama get the word out about its policy successes? President Obama campaigned on an ambitious platform of withdrawing from Iraq, engaging Iran on its nuclear program and persuading the Pakistani government to take on the Taliban and al-Qaida. Despite the charge by critics from both the right and the left in the wake of his winning the Nobel Peace Prize that he has accomplished little so far, in fact he has already set in motion significant change on several of these fronts -- despite the enormous domestic tasks that have inevitably preoccupied his administration. Yet you'd never hear about these successes from the mainstream media.

When Obama came into office in January, 142,000 U.S. troops were in Iraq, conducting regular patrols of the major cities. His Republican rivals were dead set against U.S. withdrawal on a strict timetable. He faced something close to an insurrection from some of his commanders in the field, such as Gen. Ray Odierno, who opposed a quick departure from Iraq. Moreover, Obama assumed the presidency at a time when Iran and the U.S. were virtually on a war footing and there had been no direct talks between the two countries on most of the major issues dividing them. In February, the government of Pakistan virtually ceded the Swat Valley and the Malakand Division to the Pakistani Taliban of Maulvi Fazlullah, allowing the imposition of the latter's fundamentalist version of Islamic law on residents, and Islamabad had no stomach for taking on the increasingly bold extremists.

Eight months later, it is a different world. While it is still early in his presidency, and there is too much work unfinished to give him an overall grade, it's already apparent he's outperforming his predecessor.

Iraq: B Obama has decisively won the argument over Iraq policy. Despite the massive bombings in Baghdad on Sunday -- the most deadly since 2007 -- the U.S. troop withdrawal is ahead of schedule and seems unlikely to be halted. One reason is that the security situation in Iraq, while shaky, did not deteriorate when U.S. troops ceased their urban patrols on June 30 (a date Iraqis celebrated as "Sovereignty Day"). Occasional big explosions obscure the reality of reduced guerrilla attacks. According to the Pentagon, civilian casualties have been steadily declining since late summer. Even John McCain said that Sunday's carnage should not delay the U.S. withdrawal from Iraq -- a 180-degree turn in policy for the former presidential candidate.

The process of U.S. disentanglement from Iraq has been gradual, generating no big headlines, no "Obama brings 22,000 troops out of Iraq, cuts war spending by $30 billion." But, in fact, troop levels are down to about 120,000 from 142,000 early this year, and spending on the war has fallen, from $180 billion in 2008 to $150 billion this year. Many things could still go wrong in Iraq, affecting the ability of the U.S. to meet the current timetable, but so far the Iraqi security forces are generally keeping order (there were horrific bombings when the U.S. was in control, too). He can be faulted for not working closely enough with the Nouri al-Maliki government to ease the transition, hence a grade of B instead of an A.

Iran: A There has also been movement on Iran. On Oct. 1 the administration fulfilled its campaign pledge by joining other members of the United Nations Security Council and Germany in Geneva to jawbone with Iran on the nuclear issue. As a result, Iran accepted that a United Nations inspection team would visit the newly announced enrichment facility near Qom, and on Monday inspectors from the International Atomic Energy Agency arrived at the Fardo plant. The acceptance of inspectors is an excellent sign. As long as Tehran remains willing to allow U.N. inspections, both at Natanz near Isfahan and at Fardo (which is not operational but could eventually house 3,000 centrifuges), neither facility can be used to produce fissionable material. Obama has changed the West's dynamics with Iran by direct negotiation, something that 63 percent of the American people support.

Pakistan: B Then there is Pakistan. The Obama administration came into office determined to whittle away the "state's rights" prerogatives of the Pashtuns, who form about 12 percent of the Pakistani population, of which the tiny minority of Taliban had taken advantage. From its inception, the Pakistani federal government had inherited from the British Empire a policy of not attempting to rule the tribal Pashtuns too heavy-handedly. In addition, the Pakistani military uses some Taliban and other guerrilla groups to project influence in the Pashtun areas of neighboring Afghanistan, making the generals reluctant to move against them. In spring-summer, the Obama administration convinced the Pakistani government to launch a major military operation against the Taliban in the Swat Valley. Despite temporarily displacing 2 million residents, the operation enjoyed substantial success and gained wide popular support from a Pakistani population -- including most Pashtuns -- increasingly appalled at the brutality of Taliban rule. In October, the military launched a similar operation against the Taliban in South Waziristan, despite a raft of bombings aimed by the militants at deterring the federal government from coming after them.

Obama has, moreover, signed a $7.5 billion civilian aid package that encourages economic, educational and medical development and puts pressure on the civilian government to keep the military under its control. The Bush administration gave most of its aid in the form of military weaponry or support, something of which polling shows the Pakistani public disapproves. Obama intends to build clinics and schools and to develop an infrastructure that might help fight militancy more effectively than any drone strikes can.

Obama's Pakistan approach, of building state capacity and improving the economy and basic services, while dealing with the Pakistani Taliban through large-scale military operations, may or may not succeed. But compared to his predecessor's policy of just handing over billions to corrupt military officers, some of whom have links to factions of militants, Obama's policies have been far more coherent. His use of unmanned predator drones to kill suspected al-Qaida operatives and the aid bill's demand for the supremacy of civilian rule over the military are both unpopular in some quarters, because of fears that the U.S. is turning the country into a sort of colony and infringing against its sovereignty. Obama may need to be less heavy-handed in the future to avoid a popular backlash. If not for this insensitivity to Pakistani popular opinion, he might deserve an A. The Swat and South Waziristan campaigns, at least, appear to have the support of the Pakistani public.

The administration has not succeeded everywhere. The president has yet to make a determination on his Afghanistan policy, and so far little progress has been made on a two-state solution to the Israeli-Palestinian conflict. A verdict is still outstanding about his performance in those two regions, leading to two grades of "incomplete." But Obama's withdrawal from Iraq is actually ahead of schedule, his direct engagement with Iran is producing some tentative results, and he has strong-armed the Pakistani state into owning the problem of the Pakistani Taliban, while instituting a major civilian aid program. Far from accomplishing nothing in his first eight months, Obama has been a whirlwind of activity and has already gained a place in the Iraqi, Iranian and Pakistani history books. He receives his lowest grade for his failure to force America's chattering classes to take notice. While it is a bit of a relief not to be subjected to the constant propaganda of the Bush administration about its creation of shining cities on a hill abroad, the Obama administration has gone too far in the opposite direction, hiding its light beneath a bushel.