Memorials for the dead hit the social networking site, solving awkward problems but creating a few new ones 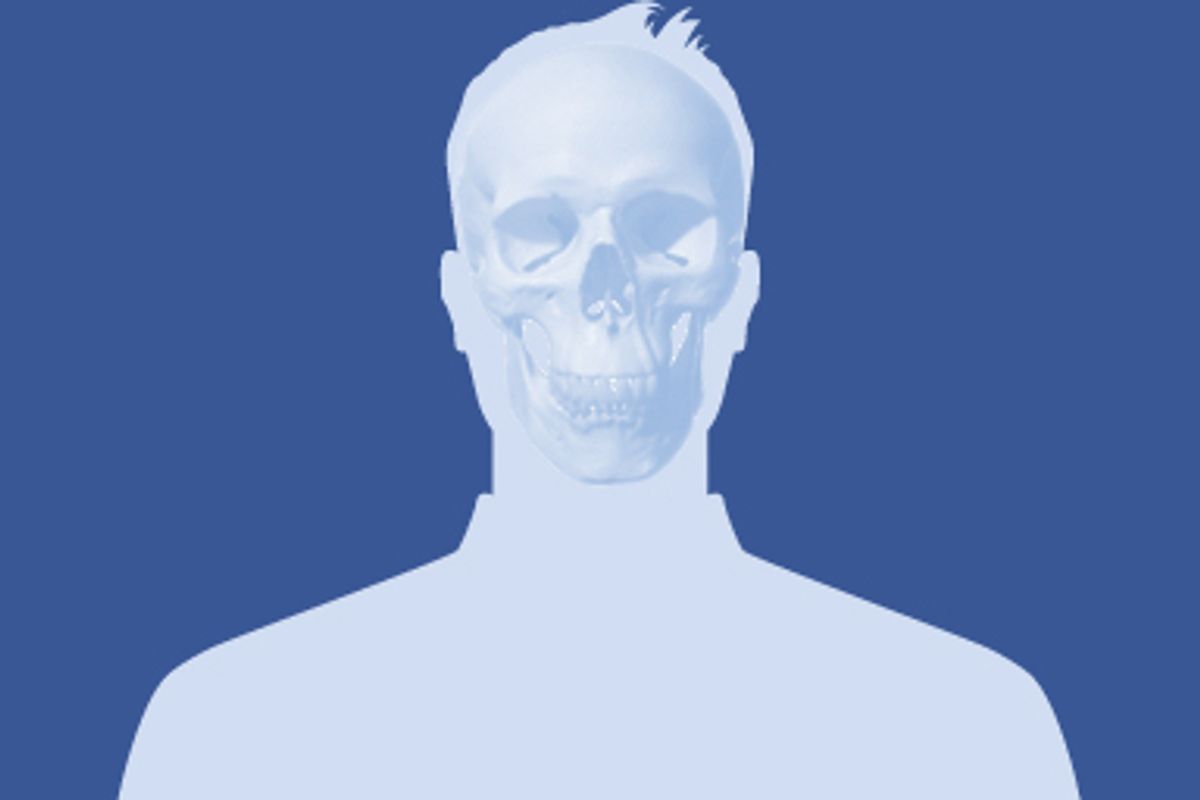 Last year, a casual friend posted that he had a cold as his Facebook status update. Then the cold turned to pneumonia, pneumonia to sepsis and with horrifying suddenness, he was gone. Gone to his friends, gone to his family. But not gone on Facebook, where his still-active account gave the unintentionally cruel appearance of someone who was still here.  True, I was grateful that his account hadn't been summarily wiped away, that this little corner of his online presence hadn't been as easily eradicated as his life had. Yet every time his name popped up on my friends list, every time FB suggested I challenge him in a game or compare people, the loss of him stabbed me anew. So I did the unthinkable: I quietly unfriended the dead man.

With over 300 million users worldwide and more piling in every day, it's inevitable that the Grim Reaper would be a frequent visitor to Facebook. But on Monday, in the midst of an unpopular rollout of a new home page, the social networking behemoth took a welcome step toward navigating that murky world between the finite nature of life and the perpetuity of the Web.

Citing a friend and colleague who'd been killed in a biking accident in the company's early days, Facebook director of security Max Kelly announced Monday that the site would be offering memorial pages for departed users. Now when an account is memorialized, its privacy settings are changed so that only existing friends can see the account, and contact information and other personal info – including status updates -- are removed. The deceased will also no longer show up in "suggestions," ending those uncomfortable directives to superpoke -- or worse, "reconnect" with -- somebody who's shuffled off their mortal coil. Friends, however, will still be able to write on the dead person's wall, to honor a birthday or post photos.

Online memorials are nothing new. There are hundreds of Web sites devoted to remembering the dead, from MyDeathSpace to the Second Life-like Virtual Heaven. There are also countless more sites specific to individuals. (I once learned an old friend had died by Googling his name and getting directed to his tribute page.)

While Facebook's move toward memorial pages is a well-intentioned one, the announcement immediately raised questions. In his blog post, Kelly had invited "friends and family" to contact Facebook with their memorial requests but offered no insight into how the company will verify them. Once an account is memorialized, no one can log in to it, not even someone with the user's password. So how will FB assure that a spiteful ex won't get your account shut off if you don't log on for a few days? What if a mother asks that an account be memorialized but the person's spouse wishes to keep it active?

Facebook's Chimene Stewart told us via e-mail they're working on the security and the social issues. "When a friend or family member contacts us to request that an account be memorialized, we check the account to ensure that the user is no longer posting and scan recent posts by others to confirm that the user is deceased," she said. "When a person passes on, friends and family members often post remembrances or condolences on the deceased person's wall, so it's usually fairly easy to confirm that, in fact, the user has passed on." She added that, "If family members disagree about whether or not to memorialize an account, we currently opt to memorialize."

KTXL-TV station in Sacramento, Calif., meanwhile, noted yesterday another potential sticky wicket in the current proposal -- Facebook is a resource for journalists. What happens to once-public information about someone who, say, turns out to have been a murder suspect or to have died from a new virus, and how well and accurately will reporters be able to access it?

Finally, there's the simple issue that an inherently impersonal medium doesn't always do the best or most appropriate job of archiving human existence. Be careful what profile pic you post  or what your friends write on your wall -- it might be your last enduring image.

Despite the problems and conflicts, however, the memorial option should offer a reasonably sensitive way to keep a person's memory alive while acknowledging there will  be no more quizzes, no more Mafia Wars, no more vacation pictures or funny links. Had my friend's account been memorialized a year ago, I wouldn't have removed him. When I go to look at his page now, it just shows all the people he and I had in common -- people we loved and worked with and saw at weddings and New Year's -- and that his settings are private. And Facebook still asks if I'd like to send him a message or add him as my friend.