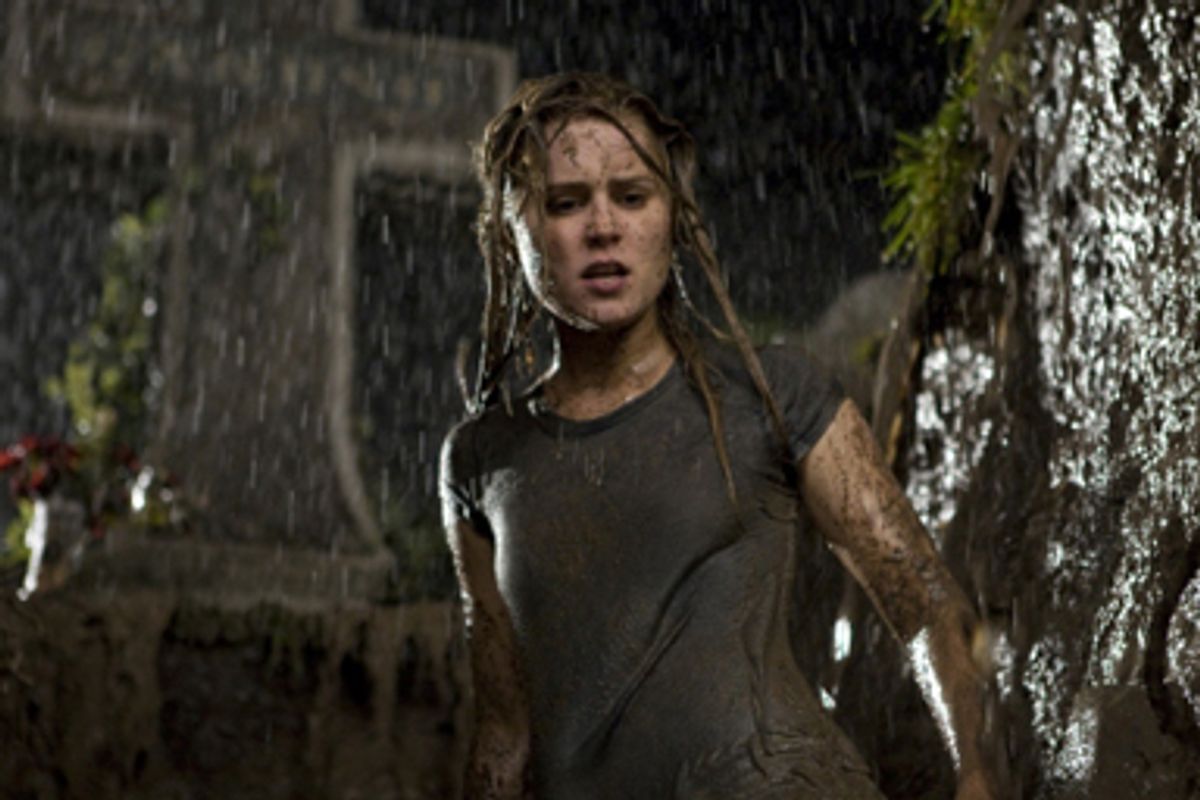 Alison Lohman in "Drag Me to Hell"

Maybe filmmakers have actually started to run out of ways to tell stories about the fact that we're all scared of dying (although we know it's likely to happen) and that we feel confused about sex. Maybe it's Hollywood's addiction to formula and nostalgia, and its corresponding aversion to artistic innovation. Maybe it's one of those cyclical, cultural things, that scholars a generation from now will start to figure out, like the disappearance of the western.

Whatever the reasons are, the mainstream American-made horror movie has been in dire condition for at least the last decade. A shambling corpse with rotting ligaments and lolling eyeballs, it just can't keep up with us. We want it to chase us away from the campfire and into the dark, deep woods, but it just shuffles around doing third-rate showbiz impersonations -- a little Jerry Lewis, a little George Romero -- and sinks back into its TV coma.

It was bad enough when horror movies just became unimaginative gore 'n' grossout spectacles, as in the "Hostel" period. It was worse when they became warmed-over formula remakes and celebrity rehab vehicles, as in the Paris Hilton/"House of Wax" period. Worst of all, most horror movies these days are both boring and careless, put together as cynical business deals aimed at separating young viewers from a few dollars and made by people with no feeling for the traditions, demands and highly discerning audiences of the genre.

With the release this week of Ti West's neo-retro, early-'80s-style "The House of the Devil," it appears that all is not lost. (A hell of a lot is lost, but not quite all.) Rather than assemble another one of those haunted-pumpkin lists of the scariest movies ever, which always tend to reshuffle the same 15 or 20 films, I thought I'd pick out a few recent horror highlights, and along the way argue for an enduring if unofficial alt-horror tradition. I'm not necessarily talking about ultra-low-budget indie films, although there are a few of those on this list. Mainly, I'm saying that horror movies based more in storytelling, character and psychological creepiness than in shock value and formula have never died, and you can find them in all kinds of places at all levels of production.

I'm not discussing here the enormous Japanese and Korean horror wave of the '90s and 2000s, which has been highly influential in Western horror but is really its own phenomenon. (And as eventually became clear, a lot of those movies were just as formulaic in their own way.) I am including a couple of Euro-horror films made in this decade because you should know about them if you don't already, and because the European take on classic American horror has helped bring the genre back to basics.

I am not writing about Rob Zombie (director of "House of 1000 Corpses," "The Devil's Rejects" and two "Halloween" remakes) because I don't like his movies that much and I'm not sure what to say about him. Make your own damn list, Zombie acolytes. As will be obvious, I'm giving a fair bit of credit for reviving 21st-century horror some of the credit for keeping horror viable to the New York indie scene around West and his producer Larry Fessenden, also a director, writer, actor and all-around genre-film Svengali. (West is also behind the IFC.com vampire-dating series "Dead & Lonely," and has made a still-unreleased sequel to Eli Roth's "Cabin Fever.")

Some of the movies on this list are more like instructive examples than shining moments in cinema history: I watched "Dark Mirror" because it was getting lots of eyeballs on IFC Festival Direct, and found that it was exactly the kind of mid-level, TV-grade, reasonably competent horror flick the cable networks used to make but don't bother with anymore. Let's begin, though, with the stuff that's absolutely terrific.

"I Can See You" This tremendous debut from writer-director-editor-composer Graham Reznick begins with the most familiar horror-movie plot device you can imagine -- a group of ill-prepared urbanites head out for a camping trip -- and ends up as full-on, post-Kubrick, experimental-film freakout. Produced by the ubiquitous Fessenden, who also appears as an increasingly sinister corporate pitchman from the distant TV past. What is that character doing at the rural retreat of a hipsterized Brooklyn, N.Y., ad agency, whose star designer (Ben Dickinson) is having some weird problems getting a painting of his father finished? There's no way to explain that until you see the movie, which goes from comic-realistic mode into full-on psycho meltdown with more terrifying adroitness than any other movie of this decade. Just out on DVD. See. It. Now.

"Drag Me to Hell" Nowhere near as obscure as the other movies on this list, but it's noteworthy that Sam Raimi's return to low-budget, '80s-style horror -- after much, much too long spent in the mind-deadening Peter Parker universe -- was met with widespread delight by both critics and paying customers. And can we just say that Sam and his brother, Ivan Raimi, were smoking some genius herb when they made their doomed main character (Alison Lohman) a loan officer forced to evict an elderly Gypsy woman and then face her mystical wrath? I hope Lohman's character is enjoying having her eyeballs boiled in Satan's cauldron, that's all I have to say. (Just out on DVD.)

"Trigger Man" This is the feature West made before "The House of the Devil," and although it has a fraction of the budget it may be even more effective. Yet another Fessenden production (and he appears in a brief, villainous cameo). Nearly wordless and plotless, "Trigger Man" follows two guys into the wilderness, where their manly getaway is interrupted by a mysterious sniper attack. Beautiful and genuinely frightening, this plays like an attempt to strip the rural-assault movie down to its basic ingredients. Oddly similar to both "I Can See You" (above) and to Kelly Reichardt's über-indie anti-bromance, "Old Joy."

"Murder Party" I'm actually surprised to realize that writer-director Jeremy Saulnier's urban-hipster horror-comedy doesn't have anything to do with Larry Fessenden. Ultra-cheap, loaded with gore and very funny throughout, "Murder Party" follows an ordinary schmo to a Halloween party held by a group of self-involved Brooklyn "artists," who've invited him there to kill him -- as, you know, a "project." Watching it, I kept thinking the broad satire was about to get unbelievably stupid, but Saulnier is spoofing the art world from the inside, and the relentlessly raunchy good nature of "Murder Party" is impossible to resist.

"The Last Winter" One last big dose of love for Fessenden, who directed this atmospheric Alaska-set eco-catastrophe thriller that channels, or so he claims, both John Carpenter's "The Thing" and Kurosawa's "Dersu Uzala." Frankly, Larry, the big spectral secret revealed at the end of the movie is pretty goofy, but that's made up for by the tense, near-future setting in which an isolated oil-field crew is drilling through the melting Alaska permafrost -- and things are starting to go very wrong. And that last shot, the one where this movie collides head-on with "An Inconvenient Truth"? Devastating.

"Calvaire (The Ordeal)" European horror directors offered all sorts of odd formula tweaks in the 2000s, but none weirder than Fabrice du Welz's psychotronic journey into "the Siberia of Belgium," where a low-rent, Tom Jones-style lounge singer is imprisoned by the way-too-friendly proprietor of a country inn. I really can't explain anything that happens in the movie after that; don't miss the homoerotic barroom-dance scene, set to quasi-avant-garde piano music. Continuing a venerable European tradition, du Welz followed this memorable and profoundly demented debut by making an execrable English-language film ("Vinyan") that went thankfully ignored. Back to the Walloon Siberia with you!

"Hardware" A minor cult classic made almost 20 years ago and only now appearing in a definitive double-disc DVD edition, Richard Stanley's post-apocalyptic "Hardware" may have struck early-'90s viewers (those few who caught it) as a low-budget blend of "Terminator" and "Blade Runner." Well, what's so wrong with that? Nasty, gory and tense, "Hardware" features future TV stud Dylan McDermott as the rakish scavenger who brings a disassembled android home to his metal-sculptor girlfriend (Stacey Travis). Of course the damn thing knows how to rebuild itself, and is trained to kill anything that's warm and moving. Hilarious hairdos aside, this is a dirty, atmospheric and nearly lost fragment of movie history. Cameos by Iggy Pop and Lemmy of Motörhead!

"High Tension" Speaking of foreshortened Eurohorror careers, French director Alexandre Aja made an international film-fest splash with this twisty, unusual take on the Yank psycho-killer genre. A pair of attractive college pals (Gallic starlets Cécile de France and Maïwenn), with some unresolved Sapphic business between them, are pursued by a slasher (in a vintage Dodge Charger with Confederate flag plates, of all things). Aja builds suspense briskly and effectively, and "High Tension" offers a narrative switchback I've never exactly seen before. Let's just say that the hulking, blood-spattered killer isn't quite who he appears to be. Aja then went on to make some dreadful-sounding Kiefer Sutherland vehicle that I haven't seen.

"The Descent" Although set in Appalachia and starring (mostly) American actors, Neil Marshall's all-female, ultra-claustrophobic spelunking adventure was actually made in England. "The Descent" begins with one of the most horrifying shocks I've ever seen in a movie, and the general mood is one of deep, dark unsettling dream. Protagonist Sarah (Shauna Macdonald) is taking the spelunking trip largely to forget a haunting tragedy, but her team of macho chicks will find that somebody, or something, in this unexplored cave really, really wants to meet them. Eventually becomes a standard chase-nightmare, but a highly effective one throughout.

"Dark Mirror" A minor film-fest and video-on-demand hit, director Pablo Proenza's nifty little L.A. gothic features a couple of attractive TV actors (Lisa Vidal of "E.R." and David Chisum of "One Life to Live") who find out that their lovely new Arts & Crafts cottage holds some strange secrets. I've never seen a horror film based on the principles of feng shui before, but I guess it was inevitable. Proenza handles the contrast between the sunny setting and the creepy occurrences ably, and although the script is indifferent I genuinely didn't see the big switcheroo coming.

Beyond The Multiplex Horror Movies