Why does Joe Lieberman oppose healthcare reform? Ask his wife 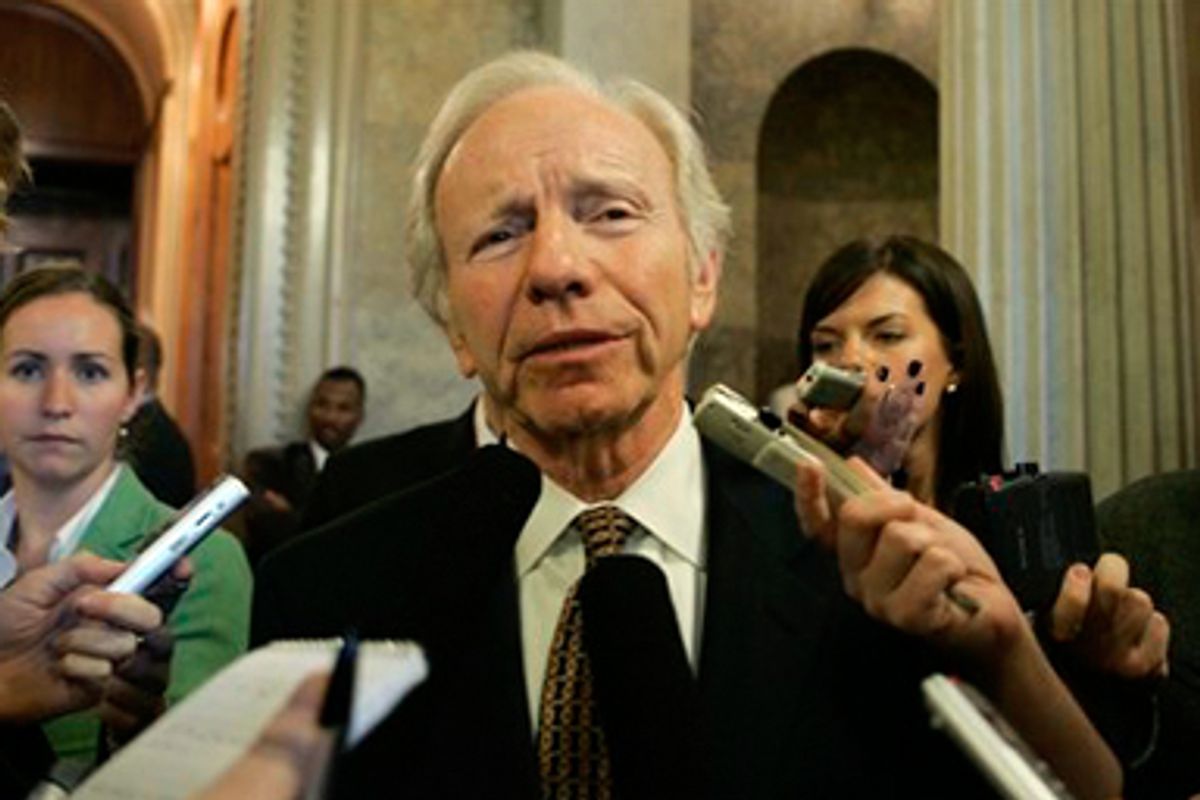 If Democrats are disappointed by Joe Lieberman’s threat to filibuster any healthcare reform bill that includes a public option, they shouldn't be. Despite all of his past promises to support universal healthcare, nothing was more predictable than the Connecticut senator's fealty to the insurance and pharmaceutical lobbyists.

Much the same can be said of Sen. Evan Bayh, who emerged from hiding on healthcare to announce that he too plans to filibuster against reform with the Republicans, regardless of what his constituents and Americans in general plainly want. Like Lieberman, his state is home to powerful corporations that want reform killed -- and like Lieberman, his wife has brought home very big paychecks from those same interests. . (UPDATE: A report published in a South Bend paper Thursday night says Bayh may now support a floor debate.)

The Lieberman family's financial ties to the health industry are no secret, yet their full extent remains unknown. During her husband's 2006 reelection campaign, Hadassah Lieberman's employment as a "senior counselor" to Hill & Knowlton, one of the world’s biggest lobbying firms, briefly erupted as an issue, especially because the clients she served were in the controversial pharmaceutical and insurance sectors. Exactly what she did for those clients has never been disclosed.

At the time she joined the public relations and lobbying conglomerate in the spring of 2005, she expressed the touching hope that she would somehow be able to help those in need. "I have had a lifelong commitment to helping people gain better healthcare," she said in a press release. "I am excited about the opportunity to work with the talented team at Hill & Knowlton to counsel a terrific stable of clients toward that same goal." Less than a year later, having pocketed $77,000 in salary, she quit without explanation -- just as her husband was facing a tough primary that he would eventually lose. Throughout the campaign, Hadassah Lieberman, her husband and their spokespersons explicitly refused to discuss her professional activities, except to note that she had not been required to register as a lobbyist.

But her stint at Hill & Knowlton was merely one episode in a professional lifetime devoted to the corporate health sector. For most of the past three decades, Hadassah Lieberman has been employed by either pharmaceutical companies or the lobbying firms that represent them -- starting with nearly a decade in the "public affairs department" at Hoffman-LaRoche from 1972-81, followed by stints at Pfizer, where she spent four years as "director of policy, planning and communications," and APCO Associates, a major lobbying firm where she served as a "senior associate" in its large healthcare division before retiring in 1998.

She went back to work when she joined H&K, an outfit that became notorious for its billion-dollar defense of the tobacco industry. Not long after her contract began, Sen. Lieberman introduced legislation vastly extending patent protection for pharmaceutical companies -- notably including GlaxoSmithKline, a top client of his wife's firm.

The best that can be said about the Lieberman family's conflict of interest is that it appears to have ended in 2005 -- while the Bayh family continues to collect enormous amounts of money from the same health insurance and drug companies that will benefit from her husband’s actions. Indeed, the smell of ethical rot arising from the Bayh household is even worse than the self-serving aroma that surrounds the Liebermans.

Susan Bayh was invited to join the board of Wellpoint back in 1998, when the Indiana-based company was still called Anthem Insurance and had not yet completed the mergers that made it the largest health insurer in America (and gave it monopoly status in many regions of the country). According to her official biography on Wellpoint's filings with the Securities and Exchange Commission, her qualifications to sit on the board of a billion-dollar corporation were minimal, to put it politely. She was 38 years old, teaching law at a local university, with limited experience as a corporate attorney at Eli Lilly & Co., the big pharmaceutical company that is also headquartered in Indiana. But then her husband, Evan, after two terms as governor, had just been elected to the United States Senate.

Susan Bayh's compensation from Wellpoint, including the stock options that she has exercised repeatedly over the past 10 years, has reached an estimated $2 million, including last year's director salary of over $300,000. She is the only director who, according to the most recent SEC filing, actually owns no shares in the company, because she sells as soon as her options become available. In January 2007, she exercised her options to acquire 3,333 shares of Wellpoint for an estimated cost of $147,000 -- and sold them the same day for an estimated price of $260,000, netting a tidy sum of $113,000. She repeated the same process five months later for a net profit of $136,000, and then seven months after that, selling another 1,430 shares for $123,000. That represented profits of nearly $400,000 on top of her salary.

Evidently Susan Bayh is most interested in accumulating wealth, and so far she has done a fine job. The Bayhs are now worth somewhere between $5 million and $10 million, an amount that was not scrimped from Evan's salary in the Senate. In 2007 he reassured a Fort Wayne newspaper in sonorous tones that sounded Liebermanesque: "I can honestly tell you that if my wife did not have a job, none, I can't think of a single decision I've made that would be any different. I look at what's best for our state and our country and my own conscience. My integrity matters more to me than anything, so I always do what's right for the people who put their trust in me."

Compared with Bayh's lucre from Wellpoint and the other corporations whose boards she graces, the earnings of Hadassah Lieberman appear paltry. Yet even though she has retired, for now, from counseling the pharma and insurance industries, the devotion to public health she has long proclaimed is still tinged with hypocrisy. Upon leaving Hill & Knowlton, Hadassah joined Susan G. Komen for the Cure, the world’s largest breast cancer charity, as a paid "ambassador." Again, it isn't clear what she does besides posing for photo ops in places from Brazil to Israel, but as a Komen advocate she is supposed to be trying to prevent women from losing their lives.

So perhaps someone should point out to her what will happen if her husband kills healthcare reform this year. Millions of uninsured and underinsured women will continue to delay or simply fail to get preventive medical care, including mammography, because they cannot afford those procedures. Thousands of them will die as a direct result of that foregone care, just as thousands die each year from lack of insurance. The swiftest way to save those women from breast cancer is health insurance reform -- and the filibuster will be their death sentence.