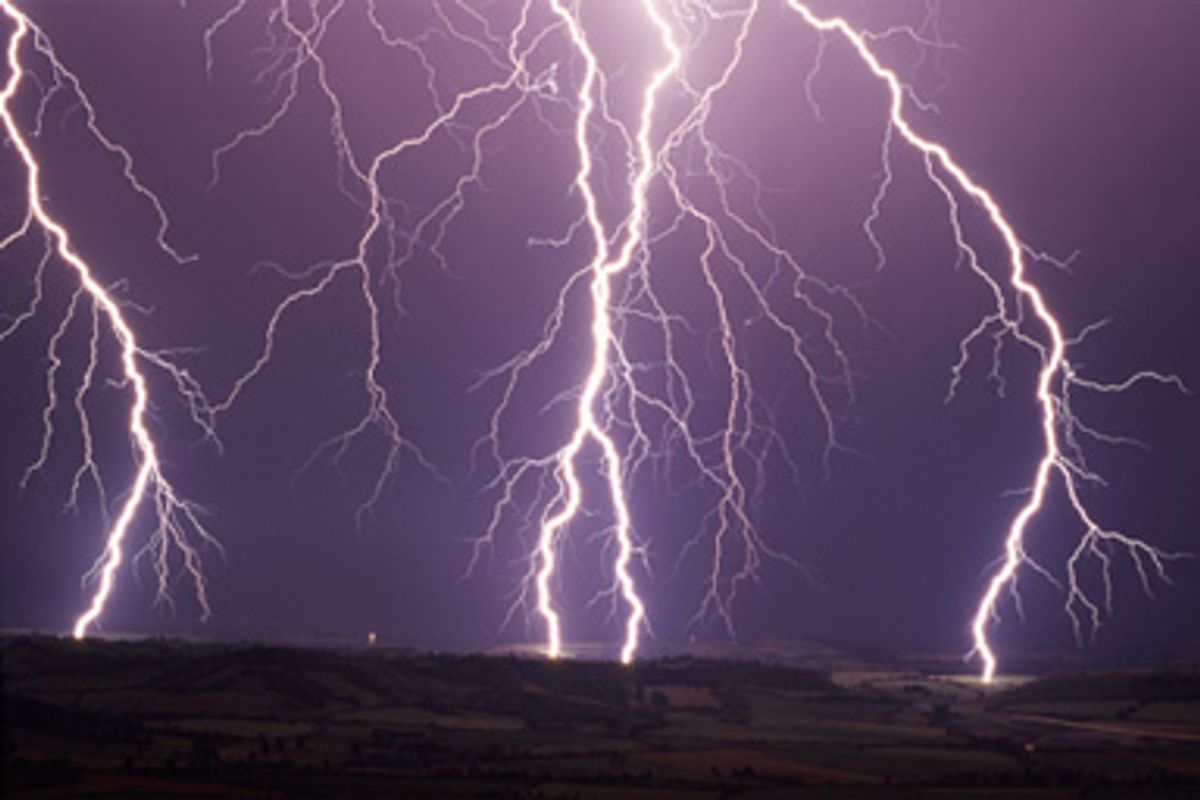 You probably don't need a movie to tell you that lightning can evoke something approaching religious terror in the most atheistic people, and can be seen as the direct work of God by the faithful. Maybe your own body told you that, the last time the hair on your neck and arms stood rigid while a bolt took down a neighbor's tree. (At our family's getaway house in central New York state, summer lightning strikes have more than once caused the phone to ring. As my wife once observed, if it's actually God on the line, what do you say?) Or maybe the fact that virtually every religious and spiritual tradition views lightning as a death-dealing instrument of divine power clued you in.

Nonetheless, that movie is here, and Canadian documentarian Jennifer Baichwal's "Act of God" is an undeniably provocative head-trip, laced with the most spectacular lightning-storm footage I've ever seen. (Baichwal got jobbed out of an Oscar nomination, in my view, for "Manufactured Landscapes," her film about photographer Edward Burtynsky and his remarkable work in China.) All those divided forks and curlicues and bizarre non-geometrical shapes are dreadful and gorgeous on their own terms, but you can't avoid the sense that there's something fundamental about them, and that they seem momentarily to open a window onto an understanding of reality you're not equipped to grasp.

That alone might be worth making a special trip to see this film on a big screen, or an expedition to the house of that friend with the really humongous plasma screen, once the DVD gets here. Beyond the amazing light show, don't expect Baichwal to take on lightning in direct or linear fashion; many viewers will be enthralled by "Act of God," while others may well be irritated. If you pay attention, you will learn a little about the basic physics of lightning in this movie. You'll also learn a little about how it mimics (on a macro scale) the transmission of electrical information within the human brain, and even how many scientists point to lightning storms in the primeval ocean as the source of the first chemical reactions -- and thereby the first life. But this isn't a science film, and the elliptical story Baichwal wants to tell is far more about our reactions to lightning -- the way we fear it and wonder at it, the way it appears to us as both random and divine -- than about lightning itself.

Her human subjects range from novelist Paul Auster, who has written about his near-miss with lightning as a teenager at camp (the boy directly in front of him was killed), to a Las Vegas death-and-dying guru who says his spiritual practice was activated by a near-fatal lightning strike, to practitioners of the Afro-Cuban Santeria religion, who view lightning as an attribute of the god Shango; and to a group of Mexican villagers struggling to understand an especially cruel act of the deity, when several of their children were killed by lightning at a hilltop shrine.

Baichwal's title, while it's meant to be suggestive, does not signify a religious interpretation: The term, after all, is used by insurance companies to describe lightning strikes, as well as by believers. To the devout Catholics in that Mexican town, "God doesn't make mistakes," and the incomprehensible deaths of their "angelitos" can only mean they were called away to some higher purpose. For Paul Auster, being struck by lightning is just one of the many chance events that we vainly struggle to fit into a pattern. Yet for all his talk about facing life as it is, and avoiding "fairy tales," he admits that the lightning incident has informed his writing career ever since. As Baichwal sees it, I think, this most elemental of elemental forces challenges whatever we do or do not believe about the universe. If it doesn't kill us first.

"Act of God" opens Nov. 4 at the IFC Center in New York, with wider national release to follow.