A court decision that reflects what type of country the U.S. is

Even when government officials purposely subject an innocent person to brutal torture, they enjoy full immunity.

It's not often that an appellate court decision reflects so vividly what a country has become, but such is the case with yesterday's ruling by the Second Circuit Court of Appeals in Arar v. Ashcroft (.pdf).  Maher Arar is both a Canadian and Syrian citizen of Syrian descent.  A telecommunications engineer and graduate of Montreal's McGill University, he has lived in Canada since he's 17 years old.  In 2002, he was returning home to Canada from vacation when, on a stopover at JFK Airport, he was (a) detained by U.S. officials, (b) accused of being a Terrorist, (c) held for two weeks incommunicado and without access to counsel while he was abusively interrogated, and then (d) was "rendered" -- despite his pleas that he would be tortured -- to Syria, to be interrogated and tortured.  He remained in Syria for the next 10 months under the most brutal and inhumane conditions imaginable, where he was repeatedly tortured.  Everyone acknowledges that Arar was never involved with Terrorism and was guilty of nothing.  I've appended to the end of this post the graphic description from a dissenting judge of what was done to Arar while in American custody and then in Syria.

In January, 2007, the Canadian Prime Minister publicly apologized to Arar for the role Canada played in these events, and the Canadian government paid him $9 million in compensation.  That was preceded by a full investigation by Canadian authorities and the public disclosure of a detailed report which concluded "categorically that there is no evidence to indicate that Mr. Arar has committed any offense or that his activities constituted a threat to the security of Canada."  By stark and very revealing contrast, the U.S. Government has never admitted any wrongdoing or even spoken publicly about what it did; to the contrary, it repeatedly insisted that courts were barred from examining the conduct of government officials because what we did to Arar involves "state secrets" and because courts should not interfere in the actions of the Executive where national security is involved.  What does that behavioral disparity between the two nations say about how "democratic," "accountable," and "open" the United States is?

Yesterday, the Second Circuit -- by a vote of 7-4 --  agreed with the government and dismissed Arar's case in its entirety.  It held that even if the government violated Arar's Constitutional rights as well as statutes banning participation in torture, he still has no right to sue for what was done to him.  Why?  Because "providing a damages remedy against senior officials who implement an extraordinary rendition policy would enmesh the courts ineluctably in an assessment of the validity of the rationale of that policy and its implementation in this particular case, matters that directly affect significant diplomatic and national security concerns" (p. 39).  In other words, government officials are free to do anything they want in the national security context -- even violate the law and purposely cause someone to be tortured -- and courts should honor and defer to their actions by refusing to scrutinize them.

Reflecting the type of people who fill our judiciary, the judges in the majority also invented the most morally depraved bureaucratic requirements for Arar to proceed with his case and then claimed he had failed to meet them.  Arar did not, for instance, have the names of the individuals who detained and abused him at JFK, which the majority said he must have.  As Judge Sack in dissent said of that requirement:  it "means government miscreants may avoid [] liability altogether through the simple expedient of wearing hoods while inflicting injury" (p. 27; emphasis added).

The commentary about this case from Harper's Scott Horton perfectly captures the depravity of what our Government has done -- and continues to do -- to Arar.  His analysis should be read in its entirety, and he concludes with this:

When the history of the Second Circuit is written, the Arar decision will have a prominent place. It offers all the historical foresight of Dred Scott, in which the Court rallied to the cause of slavery, and all the commitment to constitutional principle of the Slaughter-House Cases, in which the Fourteenth Amendment was eviscerated. The Court that once affirmed that those who torture are the “enemies of all mankind” now tells us that U.S. government officials can torture without worry, because the security of our state might some day depend upon it.

I want to add one principal point to all of this.  This is precisely how the character of a country becomes fundamentally degraded when it becomes a state in permanent war.  So continuous are the inhumane and brutal acts of government leaders that the citizens completely lose the capacity for moral outrage and horror.  The permanent claims of existential threats from an endless array of enemies means that secrecy is paramount, accountability is deemed a luxury, and National Security trumps every other consideration -- even including basic liberties and the rule of law.  Worst of all, the President takes on the attributes of a protector-deity who can and must never be questioned lest we prevent him from keeping us safe.

This is exactly why I find so objectionable and dangerous the ongoing embrace by the Obama administration of these same secrecy and immunity weapons.  Obama had nothing to do with the Arar case -- all the conduct, and even the legal briefing, occurred before he was President -- but he has taken numerous steps to further institutionalize the core injustice here, including in cases that are quite similar to Arar:  namely, that the Executive can use secrecy and national security claims to shield himself from the rule of law, even when he's accused of torture and war crimes.  That's exactly what happened here, yet again.  As Judge Parker wrote in dissent (click image to enlarge) 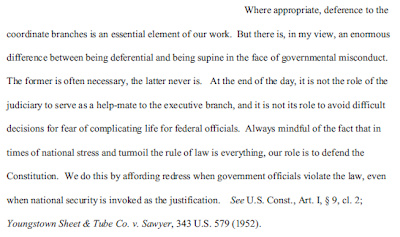 Identically, Judge Calabresi -- one of the most respected and non-ideological appellate judges in the country -- accused the majority of "utter subservience to the executive branch."  Surely that's true, but it isn't only the Arar majority that is guilty of that.  It is the nation as a whole -- drowning in infinite claims of "state secrets" and executive immunity and war necessity and the imperatives of "looking forward" -- that has meekly acquiesced to the pernicious idea that the President in an allegedly national security context must never have his actions disclosed, let alone judicially scrutinized and held accountable, no matter how criminal, brutal and inhumane those actions are.

Here's Judge's Sack's description of what was done to Arar in Syria, which accords perfectly with what the Canadian investigation found -- this is what our Government (both the executive and judicial branches) has continuously insisted it can purposely cause to happen without any accountability or even transparency (pp. 13-15): 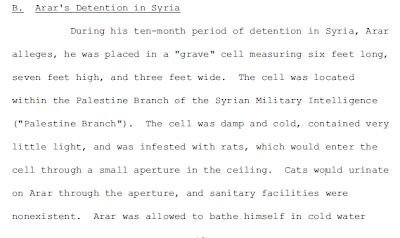 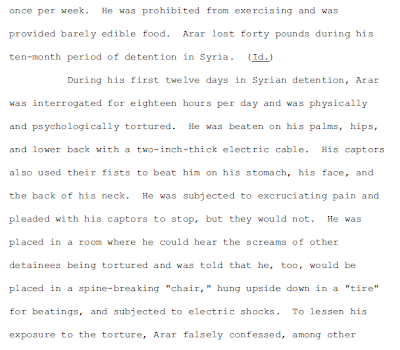 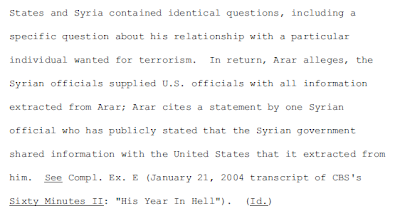 Judge Sack's equally horrific description of exactly what the U.S. did to cause all of that to happen to Arar is here.