Get ready for the Grand Old Tea Party takeover 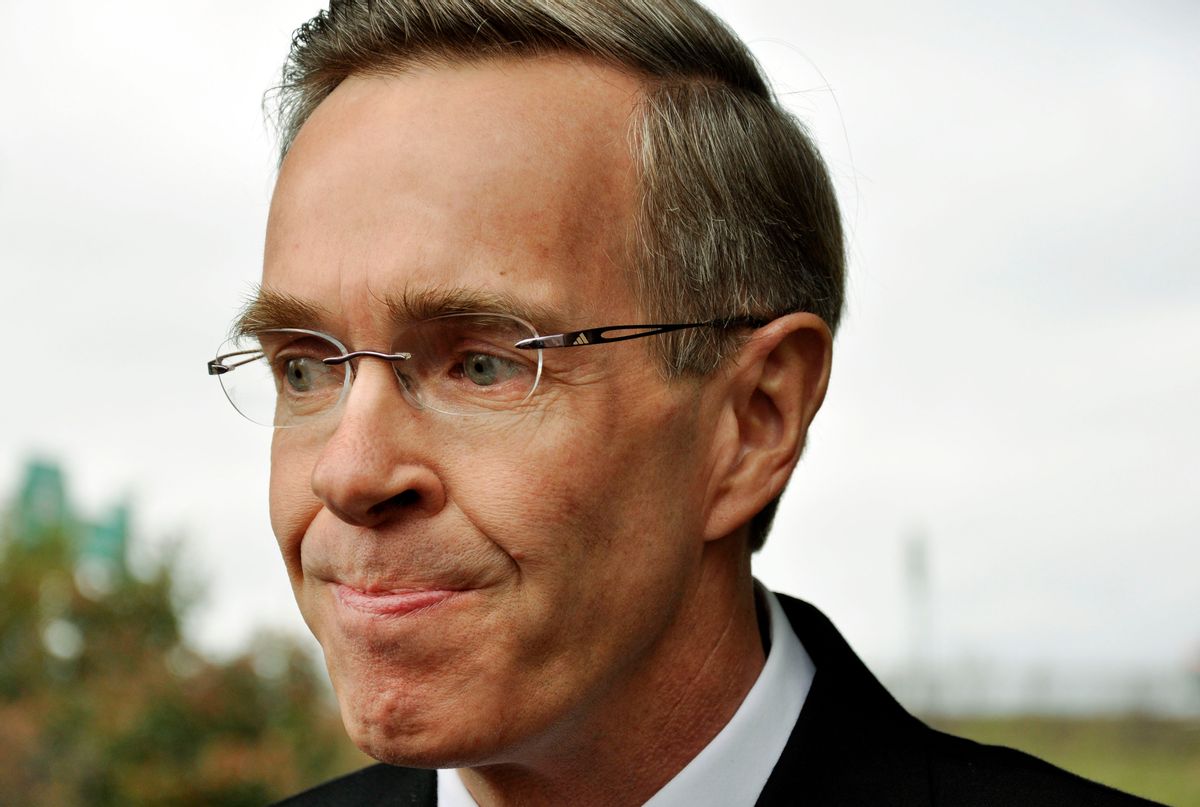 The 23rd Congressional District, stretching from Oneida, Madison and Oswego counties to the Canadian border, is where the Republican Party wants to finally stop the blue wave that swept Democrats to power in the White House and Congress. â¢ The Republican nominee and early frontrunner, state Assemblywoman Dede Scozzafava, of Gouverneur, is trying to become the first woman to represent the region in Congress. â¢ Plattsburgh lawyer and Air Force veteran Bill Owens is trying to become the first Democrat to hold the seat in about 150 years. â¢ Doug Hoffman, a Lake Placid accountant who lives a few miles outside the district, is trying to become the first person in New York history elected to a House seat only on the Conservative Party line. (AP/Heather Ainsworth) (Heather Ainsworth)
--

The whole thing may have started with a rainy April rally in Washington's Lafayette Park. But by the time the first wave of elections since President Obama took office are over, Tuesday could wind up being the day the Tea Party movement left the fringe and went mainstream. (Or at least mainstream-ish.)

Grass-roots conservatives are crowing already about a House special election in New York's 23rd District, mostly because a national movement forced out the Republican Party's officially endorsed candidate, Dede Scozzafava, in favor of a more ideologically pure choice, Doug Hoffman. Polls show Hoffman is now likely to beat Democrat Bill Owens, even though Scozzafava wound up endorsing the Democrat. The lesson the Tea Party types are taking from all this? They won the battle for the soul of the GOP.

"Conservatives are awake," said Fox News Channel's Glenn Beck on his show Monday. "This is an example of a Republican Party apparatus that is wildly out of touch with its base," said Marjorie Dannenfelser, president of the Susan B. Anthony List, a Bizarro version of EMILY's List that usually supports conservative women who oppose abortion rights, but strongly backed Hoffman in the New York race. "This will bring about more conversation and potentially more cooperation -- or there will be some folks that don't keep their positions."

If that sounds like a threat, it's supposed to. A year after Obama was elected, the conservative base has decided the answer to the GOP's problems is to purge the party of any shred of moderate impulses. The likely results of two other high-profile elections Tuesday won't do much to change that; conservative Bob McDonnell is expected to win Virginia's gubernatorial race, and the New Jersey race between incumbent Democrat Jon Corzine and conservative Republican Chris Christie may come down to the wire, with a more moderate independent candidate drawing off some votes. If things go well for the GOP Tuesday, they could sweep all three of the most-watched contests (and don't put it past them to claim credit for New York Mayor Mike Bloomberg, on pace to win a third term, even though he ditched the GOP brand).

Which is why establishment Republicans now seem a bit like they just discovered that the beat-up old car they've been driving actually has a hidden turbo button that triples its speed. With the party sitting on the smallest minorities in Congress it's seen in years, the GOP will take good news anywhere, even if it comes with a hefty side order of crazy. The moment Scozzafava quit the New York special election on Saturday, national Republicans rushed to endorse Hoffman. Sure, they were weeks behind the grass-roots base, but why quibble over details?

"Let your voice be heard, join the movement to bring real conservative change," a new Republican National Committee radio ad commanded upstate New York. "Tell the politicians, no more, we won't let you bankrupt America. We need conservative leaders who stand up for our values." (Strictly speaking, they couldn't say, "Vote Hoffman," because the GOP candidate, Scozzafava, is still on the ballot.)

But privately, Republican operatives were a little more wary of the surge of Tea Party-inspired support. "This was a uniquely screwy situation," one congressional GOP leadership aide said. Though the party dumped hundreds of thousands of dollars into Scozzafava's campaign, officials were quite happy to blast her once she quit the race. "Her inability to fundraise obviously created a huge vacuum," another Republican aide said. "She couldn't put herself in the position to even split the vote ... You cannot take advantage of the environment as a Republican candidate if you are for the stimulus."

That was only one of the heresies that drove the right wing away from Scozzafava, though. She was also pro-choice, and years ago, she had accepted an endorsement from the Working Families Party, which conservative bloggers have declared the political arm of a sinister ACORN-led conspiracy to lead the U.S. into socialism. The establishment GOP rush to embrace Hoffman on the eve of the vote makes things a little awkward; some of the bloggers who first touted Hoffman are now busy attacking top Republicans for not coming around sooner.

Other activists say they feel like they're just coming into the height of their influence. Jacob Roecker, the founder of 912candidates.org, one of the groups that endorsed Hoffman, said other Republicans could be in trouble next year -- look at Florida, where conservative Marco Rubio is picking up energy the way the movement that powered Hoffman did, or Roecker's own Oklahoma, where conservatives hope to challenge longtime Rep. Tom Cole, a member of the GOP House leadership. "It's not the third-party candidate spoiling the race -- it's the traditional candidates who are spoiling the race for those who actually believe in something," Roecker said about Hoffman and Scozzafava. Though the name of his group was inspired by Beck's own 9/12 Project, Roecker said it's gotten better than just one talk show host. "[Beck] can't put in enough hours during his week to keep up with what all of us are doing," he said. "I don't think it's his anymore. We still look up to him, but I don't think it's his anymore -- I think it's ours."

Meanwhile, for Democrats, the spectacle of Republican in-fighting over races the GOP is likely to win is a decent silver lining. The GOP has held the New York seat for decades; when Obama tapped the previous lawmaker, Republican John McHugh, as Army secretary, that opened up the possibility of flipping it, but it's not as if the House Democratic majority depended on winning.

And since the Democratic strategy ahead of 2010's much broader elections is basically to paint all Republicans as acolytes of Beck, it might not be the worst thing in the world if Hoffman won. "No matter who wins tomorrow, it's bad news for the Republican Party," one Democratic official said. "If the Democrat wins, then the factions within the Republican Party -- there's going to be mutual recrimination. If Hoffman wins, the extreme wing is going to be completely emboldened, and the moderate wing is going to be completely alienated and they're going to bolt."

Yes, there's a heavy dose of advance spin built into that message. Yet even if Republicans sweep Tuesday, there's also some truth mixed in. The GOP still hasn't figured out entirely how to handle life in the Obama era. But Election Day 2009 may provide a good clue for what strategy they try next.