One of these things is not like the other

Christie and McDonnell won by shushing the base, while Palin was the kiss of death in a rock-red House district 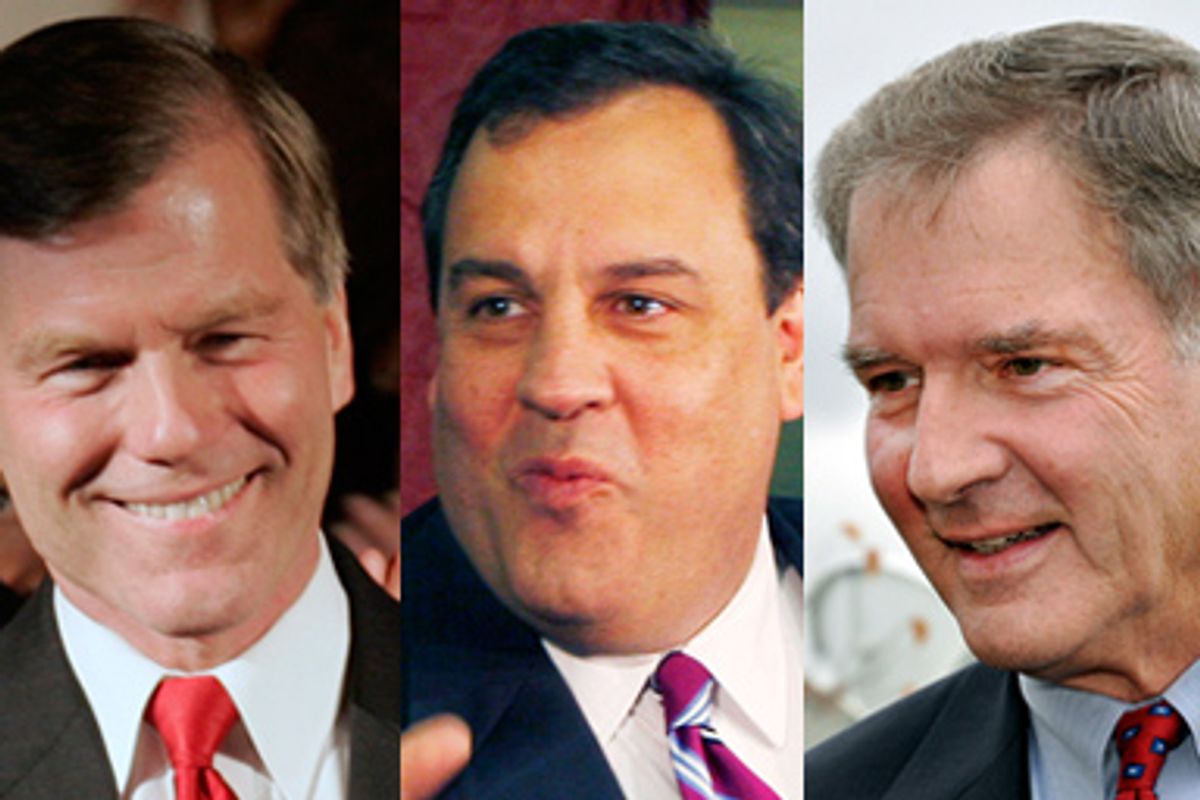 Being an incumbent in a bad economy is, still, just about the worst gig in politics. With low voter turnout, the angrier side usually wins. And oh, yeah -- booting your candidate to satisfy the whims of Dick Armey, Sarah Palin and a bunch of Tea Party rowdies isn't necessarily the winning strategy it might look like at first glance.

Those were the quick-and-dirty lessons Tuesday's elections -- the first major round of voting since President Obama took office -- may prove to have taught the political class. On the whole, of course, it was a bad night for Democrats; New Jersey dumped incumbent Gov. Jon Corzine, and Virginia elected Republican Bob McDonnell by a landslide. The White House had put significant effort in on Corzine's behalf (even as it cut Virginia Democrat Creigh Deeds loose prematurely), and the gubernatorial results are likely to cause at least a brief cable-TV-led freakout over What It All Means for next year's broader wave of elections. The only official word from the White House as the returns came in? A statement from Obama on Iran, marking the 30th anniversary of the hostage crisis there, a few minutes before midnight. Aides made sure to tell TV anchors that the president was probably watching basketball, not ballots.

But it wasn't a much better night for the most hardcore conservatives in the Republican Party. They watched their unlikely champion, Doug Hoffman, lose New York's 23rd Congressional District to the first Democrat to represent the area in the House in over a century, Bill Owens. (More votes were being tallied later, but Fox News Channel -- whose hosts were firmly in Hoffman's column in the last few weeks -- projected Owens as the winner just before midnight Eastern time.) That result would keep the GOP from a clean sweep in the three most-watched contests of the night. And it may not help the party settle a brewing intramural fight over how much control to surrender to the grass-roots types who forced moderate Republican Dede Scozzafava out of the race in favor of the ideologically untainted Hoffman.

Palin and Armey, and an armada of right-wing bloggers, pushed for Hoffman for weeks, rejoicing -- too early, it turned out -- over the weekend as Scozzafava quit. For the GOP, the lesson of the night may well be that the grass-roots aren't always right. Just because voters wish the Obama administration was turning things around faster doesn't necessarily mean they agree that the country is on a march to socialism. After all, Christie and McDonnell both won by focusing on independent voters, not the base.

And for Democrats? The lasting effect of the elections may well be a redoubling of prayers for the economy to recover in the next year. Though government statistics now proclaim the recession is over, it doesn't feel that way for most voters. "These are elections that say a lot about New Jersey, Virginia and New York 23 in 2009, and nothing about the nation in 2010," said Mark Mellman, a Democratic pollster. "It says that the economy is bad in 2009; it says that some of these candidates had some problems. If the 2010 elections were held in 2009, we would have problems."

For proof of how toxic the environment is for incumbents when people are upset about basic pocketbook issues, just look at New York, where Mayor Mike Bloomberg barely won reelection despite spending enough money to have literally buried his hapless Democratic opponent, Bill Thompson, in dollar bills if he wanted to. In New Jersey, Corzine -- who, after all, was a banker at Goldman Sachs before he went into politics -- paid the price for the economy. In Virginia, McDonnell abandoned his socially conservative past and spent the whole campaign talking about how to get jobs back to the state. That doesn't necessarily mean doom for Democrats next year, though. The party that holds the White House almost always loses some seats in Congress in midterm elections. But if the economy actually improves, and healthcare reform passes, the damage may not be as bad as New Jersey and Virginia's results Tuesday night might indicate. "If there's a lesson, the lesson should be you can't just sit around," Mellman said. "You've got to get important things done." (If the economy doesn't improve by a year from now, the country will have bigger problems than whatever happens in Congress.)

A recovery, and some accomplishments for Democrats to run on, might also help solve one problem that killed chances for Corzine and Deeds: low motivation by voters, and low turnout. A year ago, more than 3.7 million people voted in Virginia's presidential election. 3.8 million voted in New Jersey. Obama won both states, on his way to an Electoral College landslide win. Fast forward to Tuesday night. In both states, turnout dropped off so starkly it was almost hard to believe the same states were voting. Add up all the votes cast for both sides in the Virginia election Tuesday night, and it was only about 16,000 more than Obama alone got last year.

Of course, Republicans hope the election results will make it harder for moderate Democrats to go along with the party's leaders, in the White House and on Capitol Hill, as they try to get things done. "Nothing is as important to a member of Congress than his or her re-election," GOP consultant Rich Galen wrote as the returns came in. "Blue Dog Democrats will read these results and begin immediately looking at the independent voters in their districts and recalibrate their voting records, their floor statements, and their level of support for the agenda of President Obama and Speaker Nancy Pelosi."

The economy, of course, wasn't the only problem for Democrats. In Virginia, there hadn't been much question for weeks that McDonnell would win -- his opponent had run a disjointed campaign that never advanced much of a vision for the state. Even Deeds could barely keep up the pretense that it might be close at an election eve rally in Alexandria Monday night. Northern Virginia was the driving force behind the election of a slew of Democrats to statewide posts in recent years, from Mark Warner to Tim Kaine to Jim Webb to President Obama. But Deeds struggled to draw more than 200 people to the heart of the region. "Not bad for a rainy night," one Deeds staffer said of the crowd. (There wasn't a cloud in the sky.) "I've got good news," Deeds told the people there, "from the Bath County High School mock election." He'd won a meaningless contest in his home county's high school -- cue the balloons! "The lesson from Virginia about surge voters is that they want to be inspired, not scared," said one Washington Democratic strategist, speaking on condition of anonymity to be more frank about the campaign.

But even a better-run campaign might not have won. Both New Jersey and Virginia tend to reward the party out of power in this odd-year elections. It may not be that surprising that Republicans won; their base is far more fired up and ready to go, to borrow a favorite phrase of Obama's, than Democrats are at this point. Exit polls showed barely a third of voters in the gubernatorial races said Obama was a factor in their vote, but it's a safe bet that most of that bunch wasn't thinking particularly happy thoughts about the president as they cast their ballots. The challenge for the White House now will be to convince the political class to put the election behind it quickly, just as aides insisted Obama was doing. The 2009 elections don't have to be a bellwether for 2010 -- but they could be, if Democrats aren't careful.