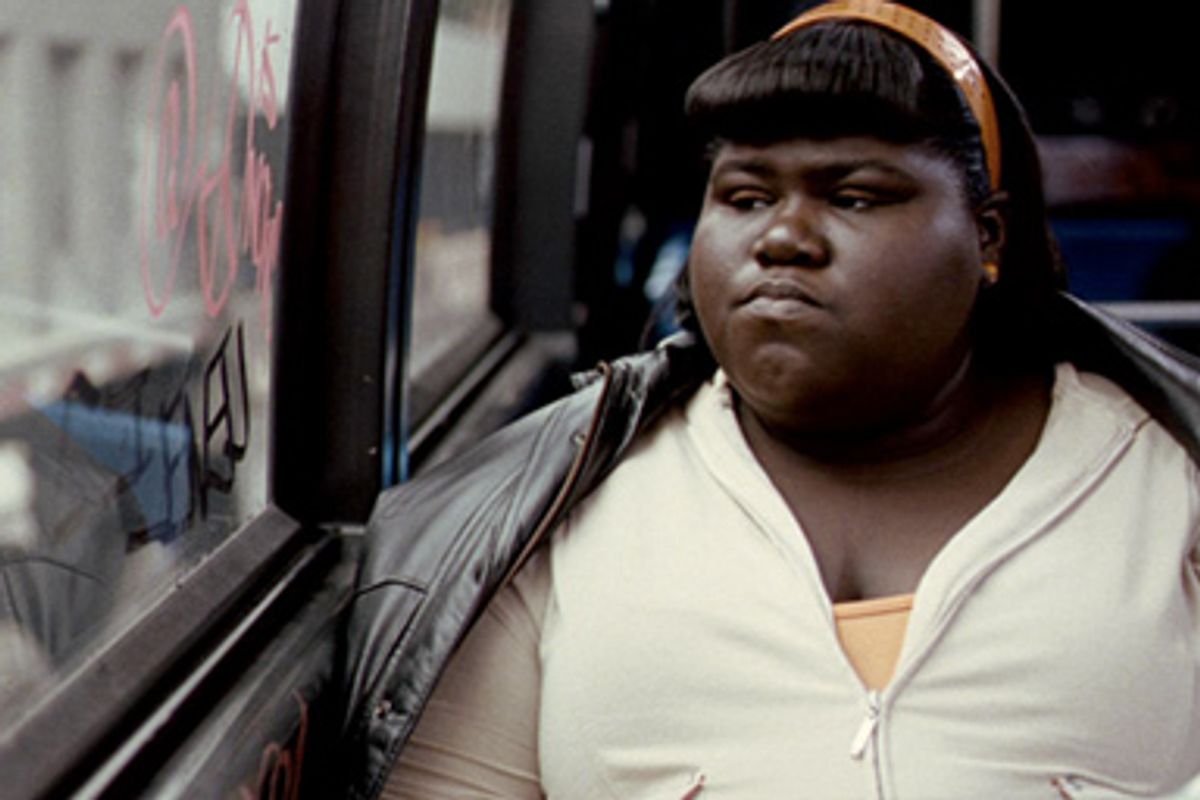 How much bad stuff can possibly happen to one protagonist? In that contest, Precious -- the Harlem teenager at the heart of "Precious: Based on the Novel Push by Sapphire" -- ranks right up there with any Thomas Hardy heroine. Sixteen-year-old Clareece "Precious" Jones, played by newcomer Gabourey Sidibe, is pregnant with her second child -- she gave birth to the first, a girl with Down syndrome, at age 12. The father of both children is her own father, who has been sexually abusing her since she was a toddler. Her mother, Mary (Mo'Nique), resents her, considering her a rival for her man's sexual attention, and abuses her physically, sexually, verbally and emotionally. She also tries to keep Precious -- who is obese and unable to read -- out of school, asserting that she's stupid and will never amount to anything.

That's a lot of adversity to overcome, a virtual trauma pile-up, and you could argue that Precious' story -- as it's told in Sapphire's 1996 novel and as it's adapted here -- would actually be more effective if some of these dire circumstances had been dialed down just a bit, leaving some room to focus on Precious as an individual rather than as a symbolic victim. In the novel, Sapphire seems to be striving to pack in the greatest number of personal and social problems for maximum heartstring-tugging, point-making value, and the ultimate solutions to Precious' complex, anguishing problems -- education, the love of a few key people who genuinely care -- come off as too pat.

That problem extends, to a point, to this movie version, directed by Lee Daniels. (Geoffrey Fletcher adapted the screenplay, and its executive producers include dual powerhouses Oprah Winfrey and Tyler Perry.) But the performances are so plainspoken and direct that they manage to push the material beyond the confines of a mere social-problem tract -- as played by the cast, these characters aren't symbols of inner-city hardship, but people. When we first meet Sidibe's Precious -- the story is set in 1987 Harlem -- she's a girl who might be better off, practically speaking, if she could just close herself off from the world. But Precious isn't closed off, as Sidibe plays her: She's cautiously expressive; she may be watchful, but she's curious, too. She shows flashes of a sense of humor, even though she can barely afford to have one. And she doesn't mind going to school: For one thing, she has a crush on her math teacher, and she harbors cheerful daydreams that he'll whisk her off to a nice life in the white-bread suburbs.

That's a world away from her life at home. In the evenings, she does her best to cook meals for her sour-spirited mother, who berates her with a degree of cruelty that's almost unbearable to watch. (Mo'Nique plays the role with unnerving efficiency, her face a mask of nearly immobile hardness.) Precious tunes out, when she can, by drifting into escapist fantasies, most of which involve an imaginary "light-skinned boyfriend with nice hair" and an array of diva-like costumes, accompanied by the adoration of camera flashes, though Precious has no skills upon which to build that fame -- in fact, she can't even read.

Fortunately for Precious (though admittedly a little too late -- we're talking about a 16-year-old girl who's unable to recognize simple words like "at"), a tough-minded principal urges her to switch to a special school. There, enrolled in a pre-GED class taught by an unsentimental but compassionate teacher, Blu Rain (Paula Patton, in a meticulously controlled, no-nonsense performance), Precious is finally able to live a life in the world, instead of only in her mind.

There are other links in Precious' support net: Lenny Kravitz shows up as the marvelously named "Nurse John," the dreamboat health professional who befriends Precious when he assists in the birth of her second child. And Mariah Carey, in a superb, tough little performance, plays a welfare worker, Mrs. Weiss, who tugs like a terrier to get Precious to open up. Carey's approach to the character is both hard-nosed and delicate: She understands the idea of intimidation as an act of kindness.

What Daniels seems to recognize, perhaps even unconsciously, is that even though this is supposed to be Precious' story, for most of it she's a passive, if sensitive, receptor: The forces swirling around her provide most of the drama's dynamics. And within that context, Sidibe's performance is understated but alert. It's not her line delivery that gets to you, but the cautious curve of her smile, a smile in which she indulges only occasionally. When we see her going off to her first day of school, the blue plastic beads she wears around her neck are a dash of visual confidence, offsetting the shyness of her lumbering carriage.

Daniels -- who produced "Monster's Ball" and directed a previous feature, the 2005 drama "The Shadowboxer" -- indulges too frequently in gratuitous shaky camera work, and the picture overall has a dull, grayish look. Those stylistic choices are predictable, but in other ways, Daniels is sensitively attuned to the story he's telling: He takes care to keep the long list of horrific details of Precious' life from being too relentless -- he doesn't flinch from them, but he doesn't seek to punish us with Precious' tribulations, either. The actors are in tune, too, knowing how to break the story's thunderclouds: At one point Precious emerges from her baffled silence to ask Mrs. Weiss outright, "What color are you, anyway?" "Precious" is a blunt, effective piece of work that succeeds not because it paints a realistic, believable picture of inner-city hardship, but in spite of it. Its characters are rescued, perhaps just barely, from the worst fate imaginable: that of being case studies.