The Tea Party crowd descends on the Capitol to fight socialism, healthcare and President Obama 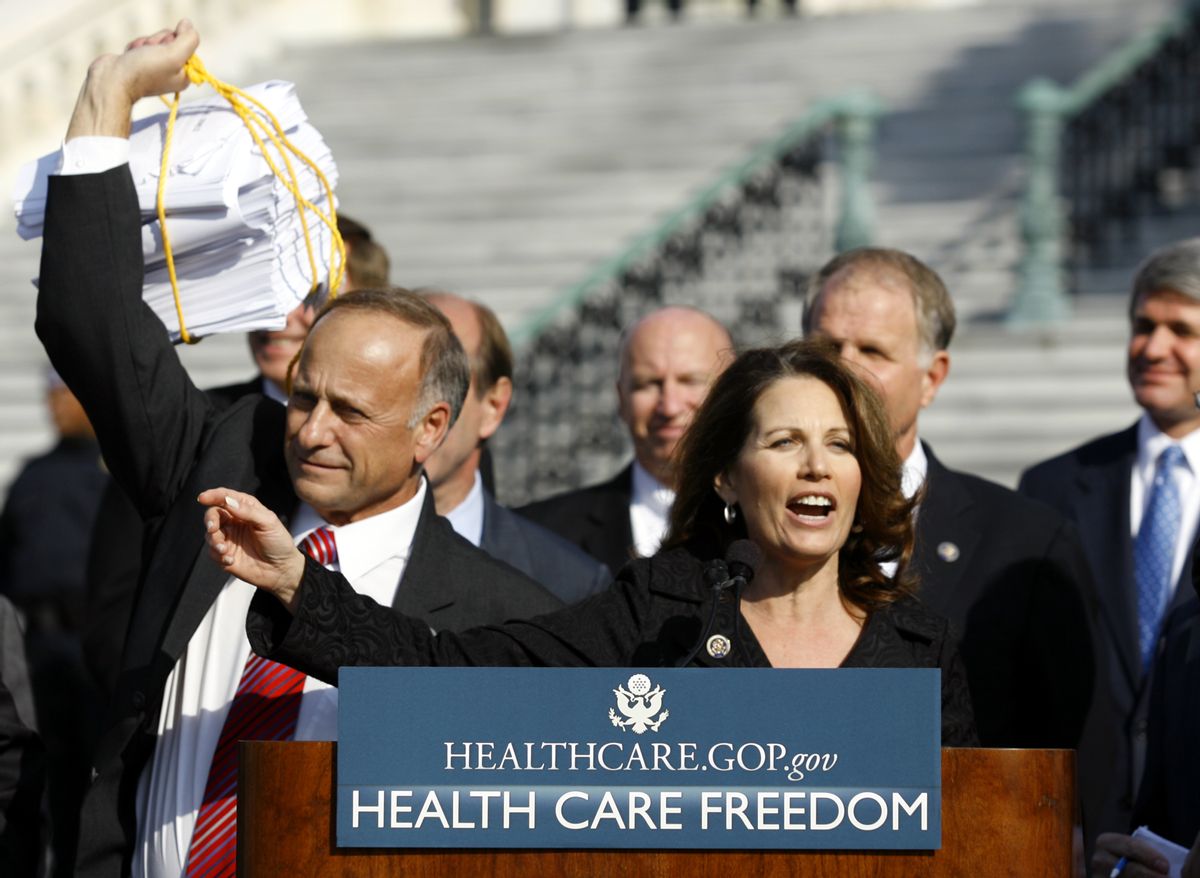 Most of the time, the halls of the Cannon House Office Building are pretty sedate. Every now and then, the soles of a pair of expensive loafers clack on the marble, and echo down the corridor; sometimes an eager intern, leading a tour group, breaks the silence with a few choice facts about American history. If there's a vote, bells ring, and lawmakers scurry to the Capitol building. But otherwise, not much is going on in the middle of a Thursday afternoon -- particularly since Congress likes to call it a week around then, anyway.

Unless, of course, you're talking about the Thursday when Rep. Michele Bachmann has summoned a horde of frenzied Tea Partiers to Washington for what she had called, on a preview conference call for conservative bloggers the night before, "the Super Bowl of our freedom."

In that case, the scene on the second floor of the Cannon building, just outside House Speaker Nancy Pelosi's office, gets a little more boisterous. A small mob had gathered there for what anti-choice kook Randall Terry billed as a sit-in to protest abortion-related provisions in the House healthcare reform legislation. They wound up mixing with some of the people who streamed in after Bachmann's "House Call" rally ended to tell members of Congress how vehemently they oppose providing universal access to healthcare. Someone tore up all 1,990 pages of the reform bill and scattered them on the floor; a few of Terry's pals got arrested; the crowd started chanting, "Kill the bill! Kill the bill!" and just like that, the police were clearing the hallway. "This is the people's House, and we're being kicked out?" one woman muttered as she walked away. "Nancy Pelosi can kiss my fat ass."

That pretty much summed up the message the Tea Partiers' mini-march on Washington was aiming for Thursday: Nancy Pelosi, kiss my fat ass. Facing the prospect of House passage of a healthcare bill by this weekend, Bachmann and the conservative noise machine went into overdrive. Big things were at stake, after all -- socialism in America! "The best way that I know of to actually kill the bill would be if we could bring the town halls, the freedom-loving Americans, here to D.C.," Bachmann said Wednesday night on the preview conference call. "Why wouldn't we go for broke?" Ah, those August town halls; the speeches by Bachmann and her allies dripped with nostalgia for the freedom-loving days when the country supposedly rejected healthcare reform. Now, by November, there was an air of desperation to the appeals. Momentum has shifted back to the side of the reformers, and the chances of something passing look pretty good.

Still, for something organized on fairly short notice -- less than a week -- the crowd was fairly impressive. Thousands of people gathered between the Capitol and the Reflecting Pool, waving "Don't Tread on Me" flags and obnoxious signs about Marxism. (Then again, with the corporate-backed Astroturf group Americans for Prosperity shipping busloads of people in and handing out signs as they arrived, the turnout wasn't that surprising.) "The biggest vote in the United States, the biggest voice in the United States, is your voice -- the voice of the American people," a beaming Bachmann told her minions. "Republicans don't have the votes to kill this bill. We knew that we were limited but what we knew was unlimited was the voice of persuasion of the American people, and that's why you're here today." Democrats were thrilled at the prospect of Bachmann suddenly becoming a major GOP power broker. "If displays like today are what they think is a smart political strategy, all we can say is: go for it," Democratic National Committee spokesman Hari Sevugan e-mailed reporters.

It was quite a display. At one point, a man in the crowd near me shouted, "No federal government!" -- which would seem to expand the mandate of the march beyond even Bachmann's wildest dreams. For two hours, a parade of Republican House members, talk radio hosts and C-list Hollywood celebrities (Jon Voigt, John "Cliff Clavin" Ratzenberger) made their way to the microphone to gleefully bash President Obama, Pelosi and everything about the healthcare legislation. House Minority Leader John Boehner, of Ohio, got so caught up in the excitement, he confused the Constitution with the Declaration of Independence, reading from the Declaration but telling the crowd it was the Constitution. The mistake was understandable; the Constitution was on a lot of people's minds. Rep. Pete Hoekstra, of Michigan, bashed the healthcare bill for being too long -- especially compared to the "39 pages" in which "our Founding Fathers enshrined freedom in our Constitution for 200 years." In contrast, Hoekstra said, the healthcare bill is "2,000 pages -- and the people in this building behind us want to take your freedom away."

After the first few speeches, it was pretty clear that the House GOP had decided, en masse, that addressing the gathering was all but mandatory. Each speaker gave a special shout-out to the patriots from his or her own state who had come, and most of them also thanked Virginia and New Jersey for electing Republicans Tuesday. There was a lot of talk about the 2010 elections. "You know it's your House, but there's a lot of people there who don't belong there," Rep. Jeb Hensarling of Texas said, asking for help getting rid of the interlopers next year.

What made the healthcare bill such a menace? That was easy. "It's gonna be from cradle to grave, controlled -- everything you do, controlled by the government," Larry Herwig, an ex-Marine from Washington, N.C., told me. "They're gonna control everything you do, from what you eat, what doctor you get, what medicine you get -- everything, controlled." I told him I didn't think that was true. "Go read the bill," he said. "Have you read it?" The crowd buzzed with Fox News conspiracy theories. "Where's the Freedom Czar?" one sign asked. When Bachmann mentioned her favorite political philosopher, someone shouted out, "I bet it's not Mao" -- a reference to Glenn Beck's recent obsession with a flip comment by a White House official.

Eventually, the endless droning by the House GOP drove people over to the office buildings to start lobbying, many of them before the talks were over. Lines wrapped around the corner as the Tea Party masses waited to get through security. Bemused Capitol Police officers had to keep telling them to avoid bunching up at the metal detectors at each entrance. The protesters stormed through the halls urgently, propelled by their righteous indignation. "They work for us," said Sherry Warren, a real estate agent from Fairfax, Va. "They would not exist if it was not for us, the American citizen who votes and pays taxes."

Talking with Warren and her husband, David, I was a little surprised they opposed the healthcare bill so strongly. Both had gone years without insurance, they told me; only when David Warren's uninsured brother got sick, and ran up a half-million dollars in medical bills, did they decide to buy their own coverage. Not long after they did, both David and Sherry found themselves dealing with their own expensive medical problems. In spite of all that, though, Sherry Warren was adamant that healthcare reform was an attempt to solve a problem that simply didn't exist. "I don't believe them when they say that people who have major health issues in this country cannot get coverage," she said. "You can walk into a hospital -- they cannot refuse you. They're not allowed to." The whole thing was a power grab, an attempt to finish what the New Deal kicked off. "This all started with Roosevelt, and it needs to stop," she said.

When I asked her how she knew the motivation behind the bill was so nefarious, she patted me on the shoulder. "You haven't lived long enough, darling," she said. "It's obvious to all of us people out there that what they're doing is, increment by increment, taking away our liberties." And with that, the Warrens and their comrades-in-arms headed off to fight socialism some more, one page of legislative text at a time.