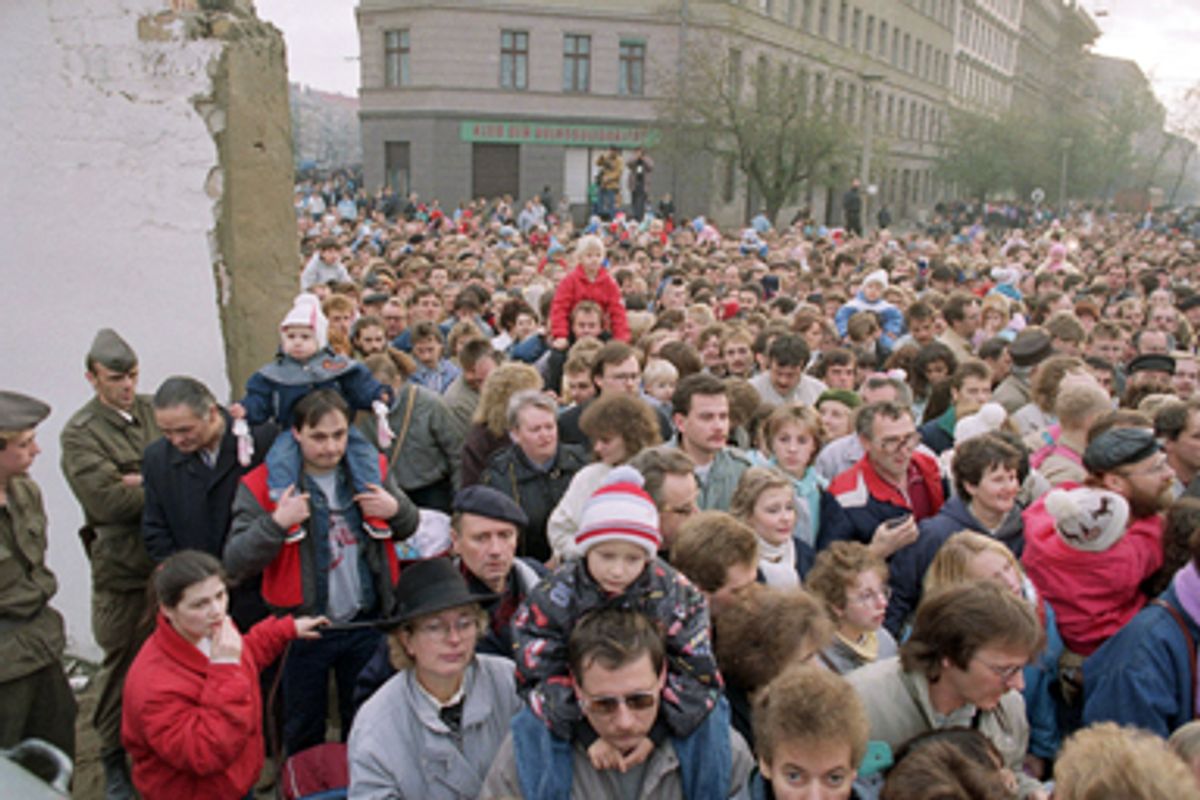 East Berlin citizens crowd the new passage at Bernauer Strasse in Berlin on Saturday, Nov. 11, 1989, where East German border police had torn down segments of the wall. After the opening of the borders on November 9, East Berliners flooded into the western part of the once-divided city.
--

On the 20th anniversary of the Berlin Wall's fall I think back to the electrified atmosphere on the streets of Berlin. I was there, watching throngs of East Germans swarm through border crossings. A Fulbright scholar and social anthropologist based in Warsaw in November 1989, I drove with a friend through gas-rationed Poland and East Germany to bear witness. Back then many of the excited East Germans I interviewed -- even some border guards -- looked to the United States as a beacon of democracy.

Flash forward 20 years and many of the hopes of those who were present at the breaching of the Wall have not been realized. In much of the former Soviet bloc the intervening decades have been distinguished not only by young democracies, but also by corruption and shady insider dealing. But for Americans what may be more disheartening is that the roles of East and West have been, to some extent, reversed. Ironically, instead of the ex-Eastern Bloc looking to the U.S. as a model, the U.S. seems to be modeling its behavior on post-communist Eastern Europe. And nothing less than America's public interest is at stake.

The way that government and business now interlock in the U.S., notably in the wake of Wall Street's meltdown, is beginning to resemble the tangle of self-interested government-business "clans" and other such informal networks that emerged during the East's transition to a market economy in the 1990s. I have come to this conclusion after spending the better part of three decades studying communist and post-communist societies -- observing first how people circumvented the communist system, and when it was coming undone, how players positioned themselves to wield power and influence and thereby helped create the emerging order. This century, as I've turned much of my energy homeward, my prior experience has -- to my surprise -- proved ideal preparation for looking into similar issues in the United States.

In Eastern Europe what happened is clear. When the command structure of a centrally planned state that has owned virtually all the property, companies and wealth breaks down and no authoritarian stand-in is put in its place, a network-based mode of governing and business develops to replace it. Throughout the region, long-standing networks, positioning themselves at the state-private nexus, rose to fill leadership vacuums and, at times, reaped the spoils of previously state-owned wealth. Known variously as "clans" in Russia, "institutional nomadic networks" in Poland, and by still other names elsewhere, always their members were energetic and well-placed, sometimes also ethically challenged.

A "clan-state" arose in Russia in the 1990s. During that period, competing political-financial cliques –- or clans -- mobilized to exert control over the economy, energy, internal security and other valuable arenas. They had a strong footing both in segments of the state and in business or finance. Their loyalty was to their group, and to promoting that group's agenda, rather than to the broader public interest. A prime example of the Russian clan at work would be the "Chubais Clan," named after the young “reformer” Anatoly Chubais, which had earlier coalesced through a club of young intellectuals, then teamed up with advisors from Harvard University to carry out economic reform and privatization of state assets and became one of the most powerful clans of the era. Its comparative advantage in the Russian context was its access to hundreds of millions of Western aid dollars. To serve the clan's agendas, members of the clan closely guarded official information, made end runs around the bureaucracy and the democratically elected parliament, and straddled multiple and mutually reinforcing roles across government and foreign aid-supported private organizations.

A similar, but more benign, version of the clan developed in post-communist Poland -- the institutional nomad networks. The phrase was coined by Polish sociologists, but also sometimes crops up in the Polish media. These tight-knit networks are so named because their members migrate freely between institutions -- governmental and nongovernmental, including national branches of international banks and foundations. Nomadic networks were not nearly as likely as clans to cross the line into criminal activity -- there wasn't as much at stake in Poland as in vast and resource-rich Russia. (Besides, there is little evidence of criminal mafia infiltration in the Polish political establishment, as opposed to the institutional and legal frameworks of the Russian clan-state.) As with clans, however, the members’ primary loyalty is to their network, rather than to the institutions, both governmental and non-, for which they are working at any given time.

The nomadic networks were key players in the immediate post-communist years especially, but they still hold sway today. One such network that was very visible in the late 1990s, known as Ordynacka (and whose members first came together during their student days under the umbrella of a communist club), counts among its ranks the popular Aleksander Kwaśniewski, who served as president of Poland from 1995 to 2005. Ordynacka can't be reduced to a political party, NGO, social club, business or lobbying organization, yet its influence can be seen in the politics, the economy and the media.

Operating at the pinnacle, members of both clans and institutional nomadic groups secure the resources and power necessary to further their group's goals, whatever they might be, often at the expense of the institutions they supposedly serve. It may seem absurd to suggest that American democracy today has anything in common with Russia or Poland in the early 1990s, or far-fetched to compare American businessmen and government officials with Russian clans and Polish nomads. But in the aftermath of the financial crisis in the United States, some things are starting to look familiar.

The post-communist players bear a striking resemblance to the interlocking handful of Wall Street–government policy deciders who "coincide" at the highest echelons of power and have come to be symbolized by "Government Sachs." From those who ruined Enron to those who wrought more recent Wall Street wreckage, a lack of loyalty to institutions, including the dearth of regard for shareholders and boards of directors, has characterized the modus operandi of the Wall Street players who brought on the financial crisis in America -- and the world.

In both the East European and U.S. cases, operators at the top challenge governments' rules of accountability and businesses' codes of competition, ultimately answering only to each other. In both cases, it's hard to get more "efficient," because inside information and power is confined to very few actors who trust each other. And, because only the players have the information, they can brand it for everyone else’s consumption without anyone being able to challenge them. Their maneuverings are largely beyond the reach of traditional monitors. Gone are the messy disagreements and competing interests of the democratic process. You can hardly get more efficient, for example, than having two former Goldman Sachs executives like Treasury Secretary Henry Paulson and assistant Neel Kashkari hand $700 billion in taxpayer money to errant financial firms, including a hefty chunk to Goldman Sachs.

Moreover, the intertwined coterie of financial and policy deciders in the United States is creating not only the financial architecture of the future, backed by the power and billions of the state, but, more generally, new relationships between the bureaucracy and the market. A perfect example of these relationships in Russia is Gazprom, the natural gas conglomerate created from the Soviet gas ministry in 1989 and staffed by nomenklatura turned capitalists. While it was nominally privatized in the 1990s, the Russian government holds a controlling stake and Gazprom is run by Putin cronies. Just as the Russian government holds a controlling stake in this major industry, bailouts have made the U.S. government a huge shareholder in two financial firms, AIG and Citi, as well as two carmakers, General Motors and Chrysler. Through their maneuverings, these networks help create new institutional forms of governance in which state and private power are not only interdependent but often blurred. With minimal public input or even notice, this new architecture provides more and more opportunities for the players to reinforce their power and wield influence -- largely beyond public scrutiny.

Though practically invisible to the public, the current challenge to democracy actually characterizes much of federal governance in the United States today. This state of affairs grew out of a reconfiguring of the balance between state and private interests, combined with a hollowing out of the regulatory and monitoring functions of the state. A major contributor to it lies in regulatory and policy changes associated with the contracting out of government work to private companies over the past 15 years. One result is that, today, most of the work of the federal government is actually performed by contractors. In fact, three-quarters of the people working for the U.S. government actually receive their paychecks from private companies, according to government scholar Paul Light. The outsourcing of many government functions is now routine. Contractors choose and oversee other contractors, control crucial databases, draft official documents, and run intelligence operations -- constituting one-fourth of the country's intelligence workforce. Government bailouts and stimulus packages are managed and overseen by contractor firms that can hardly be said to be disinterested.

While the public is familiar with the excesses of the now infamous Blackwater (renamed Xe), it is generally unaware that companies stand in daily for government. Many public priorities and decisions are driven by private companies instead of government officials and agencies that must answer to citizens, with officials only signing on the dotted line. In report after report, government investigators (such as the Government Accountability Office and inspectors general) have raised questions about who really sets policy -- government or contractors? -- and whether government has the information, expertise, institutional memory and personnel to manage contractors -- or is it the other way around? Other contributors to the new forms of blurred governing include the rising number and influence of quasi-government advisory boards, according to the Congressional Research Service, the upsurge in personal envoys forging public policy, and the drift of governmental legitimacy and expertise to private partners.

The upshot of all this is that new institutional forms of governing that join the state and the private permeate virtually all arenas of government, most visibly intelligence, military and "homeland security" enterprises, where so much action has taken place since 9/11. It is questionable whether the world's model democracy can be counted on to act in the national and public interest. And it is hard to see how all this can be unraveled. The challenge the current state of affairs presents to democracy and the free market may well prove more daunting than the dismantling of the Berlin Wall.

Janine R. Wedel, a professor in the School of Public Policy at George Mason University and a senior research fellow at the New America Foundation, is the author of "Shadow Elite: How the World's New Power Brokers Undermine Democracy, Government, and the Free Market" (Basic Books, Dec. 1).

Janine R. Wedel, University Professor in the School of Policy, Government, and International Affairs at George Mason University, is the author of "Unaccountable: How Elite Power Brokers Corrupt Our Finances, Freedom, and Security."