Inside the elaborate, disturbing and downright riveting world of child-beauty pageants 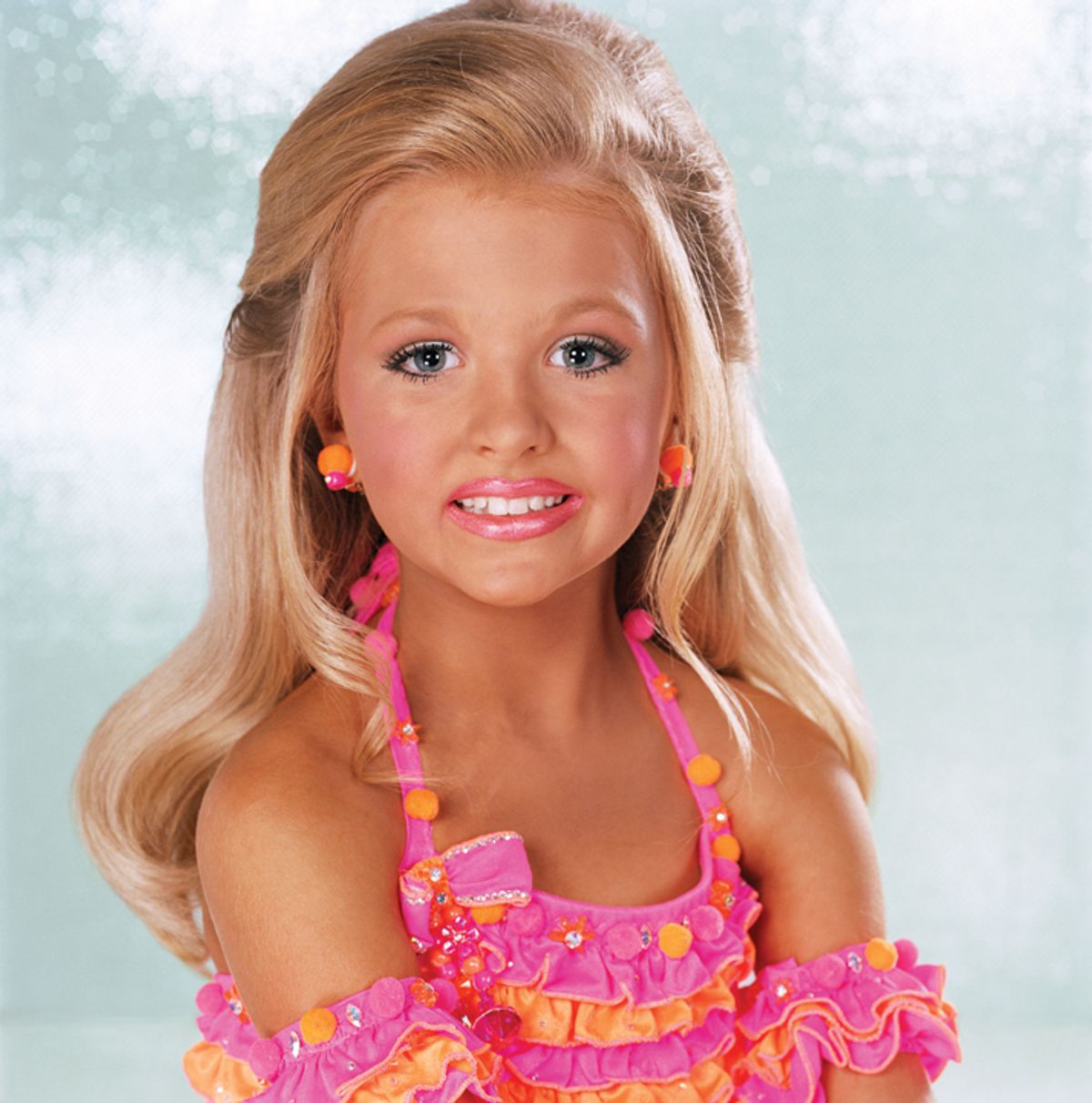 Among the many questions raised by photographs of child beauty pageant contestants, there is the question of how we are to view them. Are these images art or exploitation? Creep show or camp? The little faces spackled with makeup, the hair poufed and shellacked, the fake tans, fake teeth (called "flippers," they mask baby teeth), fake nails and, often, fake smiles -- all of it seems so jarring on toddlers and tweens. Looking at these pictures, shot by Los Angeles-based fashion photographer Susan Anderson and recently published in a book called "High Glitz: The Extravagant World of Child Beauty Pageants," you can’t help feeling unsettled. The mind knows these are very young girls, and yet the eerie effect of all the cosmetics and correctives is to create the illusion of child-women far older than their actual years. Several seem to be on the cusp of middle age, as though they should be shaking a martini rather than twirling a baton. The mind keeps mentally adjusting, attempting to square the disjunction between tiny bodies and unnaturally mature faces. “Freaky,” said a man standing back to examine the photos at the Los Angeles opening. “It’s not right."

“People aren’t lukewarm about it,” Susan Anderson, the artist, says. “They either really like it, or they have a problem with it. But I have no reason to make something that people don’t react to one way or the other.” Anderson first became interested in the $5 billion-a-year child pageant industry after watching a television documentary about the history of beauty contests. She began to research the topic on the Internet, and, eventually, contacted the director of University Royalty Beauty Pageants to ask if she could document their upcoming event in Austin, Texas. That was 2005; she has photographed four pageants since. To capture her shots, Anderson sets up in the lobby of the hotels where the pageants are held -- Doubletrees and the like -- and photographs a gussied-up girl as she enters or leaves the competition. “They’ve just done their performance, or are waiting to go onstage. It’s this very charged environment,” Anderson says. Every child chooses her own pose, while the mothers, who have signed a release, watch. “I’m documenting a moment in time, not setting it up.”

Anderson’s main interest lies in the "High Glitz" aesthetic -- the excessive makeup and Elvis-in-Vegas spangled outfits -- wherein more is always better, and the trendy hairstyle of the season might be inspired by that year’s special-edition Barbie. “It’s a world unto itself, with its own rules,” she says. “I really don’t understand where it comes from. Who is making these aesthetic choices? I have seen some of the hairstyles in a Seventeen magazine from the 1970s, or maybe on 'Star Trek.'” She insists that she photographs in an anthropological capacity, as an objective eye, the pageant-world equivalent of a wartime photojournalist. “I’m not here to judge these girls or what their parents are doing. I’m here to look at it from a different perspective, to go out there and collect the facts, to learn about the pageants and the costumes.”

But it’s impossible to look at these photographs from an aesthetic point of view only, as they inevitably provoke questions. Are the girls being objectified -- by us, or by Anderson, or by the pageant industry, or by their parents, who have involved them in it? Are they simply dressing up in fancy clothes and makeup, as little girls do, albeit in a formalized way? Are they being inappropriately sexualized, and if so, will this have any lasting consequences for them? Likewise, will there be any psychological fallout from the emphasis on looks and weight starting at such a young age? (A study conducted by the American Psychological Association in 2007 found that premature sexualization of preteen girls and “frequent exposure to cultural beauty ideals” was linked to eating disorders, low self-esteem and depression.) Will these girls grow up to be women who believe, like so many do, that their looks are the measure of their self-worth? What about the narrow aesthetic these pageants peddle: Are our collective notions of female beauty so impoverished? And then, the shadow of JonBenet Ramsey looms large -- who can forget those videos of the 6-year-old victim-to-be prancing like a showgirl? -- raising the worry that the tiny contestants might be prey for some sicko voyeur.

Moral and ethical questions aside, we wonder, simply, what motivates a parent to enter his or her daughter in a pageant. Because, as David Hinckley wrote in the New York Daily News, “[I]t doesn’t take a Ph.D. to realize that the parent, not the 4-year-old, is the engine driving this train.” Some pageant parents say they compete for the prizes (tiaras and cash), some for the hope of future fame, some to give their daughters a better life than they had. Still others talk of the discipline, poise and confidence pageants instill. Of course, one might argue that piano lessons, or ballet class, or athletics would instill those qualities, too.