When Congress sells out women

The Democrats' lust to win at any cost stripped abortion from the healthcare bill. Can pro-choicers put it back? 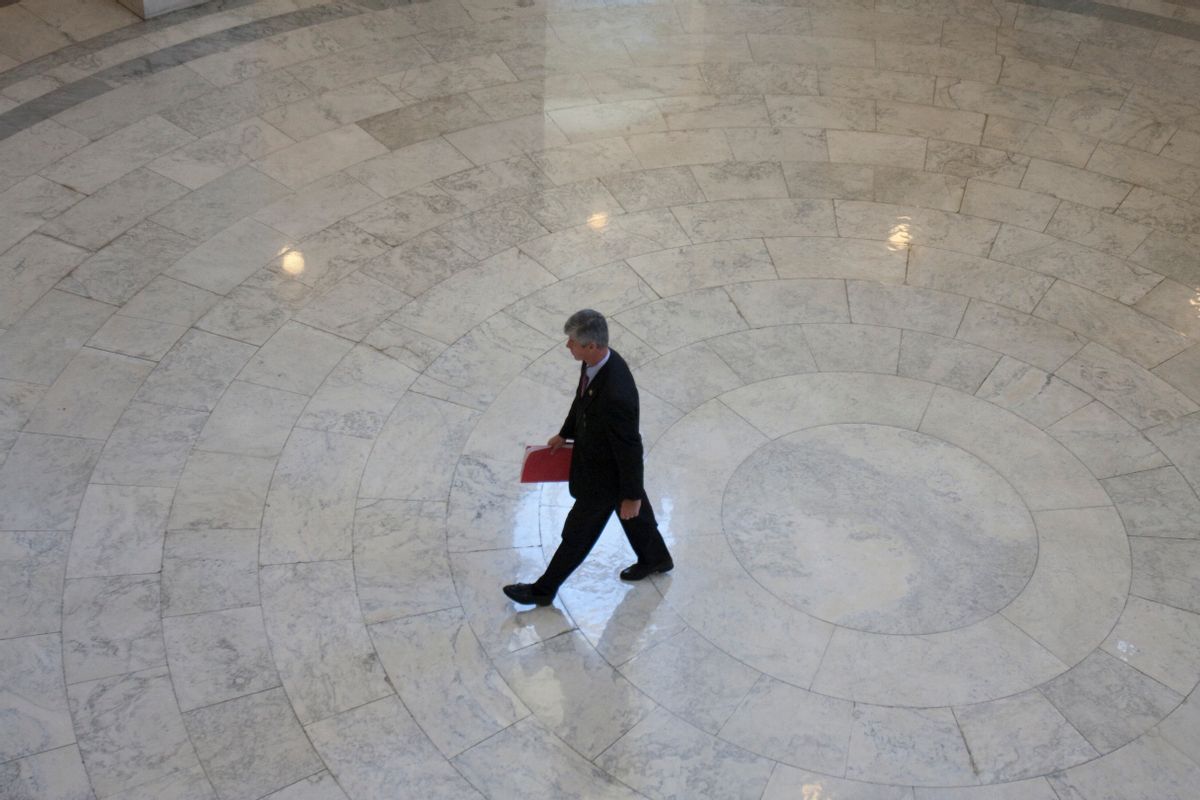 It was just a week ago that I sat in Democratic Rep. Rosa DeLauro’s office, along with others in the Religious Coalition for Reproductive Choice, to strategize about getting pro-choice people of faith out to make sure that health insurance reform would include private and public options for women who choose abortion. It was a painful discussion. DeLauro, a pro-choice Catholic, is deeply committed to abortion choice as a matter of social justice, but she understood how important even a flawed reform bill would be to providing healthcare for low-income working people.

At one point I looked at DeLauro and both of us welled up with tears over the dilemma we knew she and others would face. About 20 antiabortion Democrats, mostly Catholics, with the full lobbying power of the Catholic bishops behind them, were very likely to force the inclusion of Rep. Bart Stupak's antiabortion amendment to the Affordable Health Care for America Act, the inaptly named House bill. I did not envy the choice DeLauro and others would have to make. I knew the likeliest, and probably the right choice, would be to vote for passage of the bill.

That is just what happened when Democrats voted Saturday night for the act, which passed with the broadest restrictions on funding for abortion since the Hyde Amendment was enacted in 1976.  The Stupak amendment forces insurance companies that currently provide abortion coverage to choose between continuing that coverage, or dropping it for all women if they want to participate in health insurance exchanges, and sell their product to government-subsidized consumers. If Democrats don’t get over their lust for a majority at any cost, this health insurance reform will haunt them the rest of their lives.

Ezra Klein of the Washington Post gets it exactly right.

Because of the limits placed on the exchanges, most of the participants will have some form of premium credit or affordable subsidy. That means most will be ineligible for abortion coverage. The idea that people are going to go out and purchase separate "abortion plans" is both cruel and laughable. If this amendment passes, it will mean that virtually all women with insurance through the exchange who find themselves in the unwanted and unexpected position of needing to terminate a pregnancy will not have coverage for the procedure. Abortion coverage will not be outlawed in this country. It will simply be tiered, reserved for those rich enough to afford insurance themselves or lucky enough to receive it from their employers.

Many Democratic women were shocked, and a wave of revulsion and anger at the Democrats who voted for these restrictions has ensued. The strongest advocates for choice in the House have moved quickly to pledge to reverse the restrictions. The Progressive and Pro-Choice Caucuses, led by Rep. Diana DeGette, announced they have 41 signatures on a letter to Pelosi that says they will not vote for a final bill if the restrictions on abortion go beyond current law.

President Obama is once again silent. Robert Gibbs refused in today’s press conference to offer any assurances that the president would stand up for choice. And, shockingly, Sen. Claire McCaskill, one of Obama’s "feminist" campaign surrogates, pushed the party’s flawed decision to sell out women for a Democratic majority, extolling the party’s commitment to “moderates.” So now anti-choice Democrats are moderate? McCaskill went further and pooh-poohed the restrictions, claiming most women would still get their coverage from employers and the bill would affect only a few women.

We started down this road in 1976 when the Hyde Amendment passed and when, in 1980, the Supreme Court upheld the principle that the federal government had the right to enact policies that favored childbirth over abortion by restricting funding for abortion. Most Democrats saw that giving antiabortion taxpayers greater moral standing than women who choose abortion was a political power play. After all, taxpayers don't get any other say in how their taxes are used. Pacifists' dollars support war; anti-bailout Americans saw their taxes go to banks just this year. Except on the issue of abortion, if you want to be a tax resister, the only thing to do is not pay your taxes and go to jail.

Clearly, the antiabortion right was using poor and powerless women as surrogates for their inability to control all women’s access to abortion. Sadly, a few pro-choice Democrats agreed with the antiabortionists that abortion should be legal but was morally repugnant, and should not be supported with federal dollars. Joe Biden, Jimmy Carter and Al Gore (who later changed his mind) were in that camp.

While efforts to overturn Hyde from 1976 to 2004 were sporadic and unsuccessful, at least some legislators tried. Most pro-choice legislators and advocates continued to agree that it was immoral to deny public funding to poor women for a service that was legal. All that changed with the Democratic defeats in 2004, which led the Democratic Party to falter seriously in its commitment to choice. Party leaders courted antiabortion Democrats as candidates for the House and Senate in conservative districts and states.

Howard Dean, then party chair, initiated an outreach plan to integrate anti-choice Democrats into the party. In fact, they were able to hold their press conferences in the Democratic National Committee building. Democrats for Life has proved to be radically antiabortion, and its members have been congressional ringleaders of the effort to exclude abortion coverage in health insurance reform. The party stopped calling them anti-choice and adopted the language they preferred, “pro-life." In many ways, the message was sent that being pro-choice and antiabortion were equivalent, morally and politically. Deeply held beliefs were not to be critiqued, they were simply to be accepted so that Democrats would be seen as sensitive to religious values.

Religious groups that were broadly in alliance with the positions of the Democratic Party, but disagreed with the party on abortion, stepped up and began to “advise” the party on how to talk religion and gain the votes of the small percentages of anti-choice Catholics and evangelicals who are progressive on other issues. Democratic operatives promoted the new antiabortion progressives with deep-pocket party donors who were searching, post-2004, for new groups to support to reach out to "people of faith." Most of those same groups have worked for the Stupak amendment, including Sojourners, Catholics United and Catholics in Alliance for the Common Good. They are now among the religious voices listened to on the Hill and in the White House.

Obama himself contributed to the rehabilitation of the immoral positions on abortion and poor women taken by these groups when he adopted the common-ground approach to abortion. The president chose to emphasize the “good will” and deeply held beliefs of those opposed to abortion and funding for poor women as opposed to a clear critique of the immorality of restricting a woman’s right to decide whether abortion was a moral decision for her, personally. The White House pushed pro-choice leaders to acquiesce to this form of diplomacy by creating a “dialogue” among all players, with no reference to the merits of various positions on abortion, simply a so-called shared commitment to “reducing abortion.” The president presented his own pro-choice position as just one view among many.

Common ground was featured and promoted even on Web sites devoted to choice, when RHRealityCheck.org dedicated a special site to providing a platform for both pro-choice and antiabortion views, further legitimating the idea that the legality and morality of abortion rights were debatable. We were treated to glowing descriptions of the “good” pro-lifers like Alexia Kelly of Catholics in Alliance for the Common Good, who compared abortion to torture and capital punishment, as well as the “bad” old pro-lifers like Doug Johnson of the National Right to Life Committee and the Catholic bishops. Following the vote on the Affordable Health Care for America Act, Catholics United issued a press statement in which they allied themselves with the bishops: “We are proud to stand with the US Catholic Conference of Bishops, the Catholic Health Association and other Catholic groups who have lent their unified support to this bill.” (How any progressive Catholic group can be proud to stand with a religious institution that just opened its doors to every homophobic and misogynistic Anglican to come on over and join our church is beyond me.)

Some pro-choice leaders warned that the party’s strategy, in the name of morality, muted the moral justice inherent in the pro-choice position. Former NARAL president Kate Michelman argued with Chuck Schumer and Howard Dean about anti-choice Democratic candidates to no avail. Party leaders were reassuring and adamant: If we could get a Democratic majority and a Democratic president, we would save choice.

So far, at least when it comes to health insurance reform, Dean and Schumer have been wrong. Let’s hope that the wrath that has gripped women in the face of this vote, and the immediate move by the Progressive and Pro-Choice Caucuses to adopt the take-no-prisoners strategy of the anti-choice crowd, saves the Democratic Party from itself.