Wes Anderson's take on Roald Dahl is possibly the best movie about family, community and poultry thievery ever made 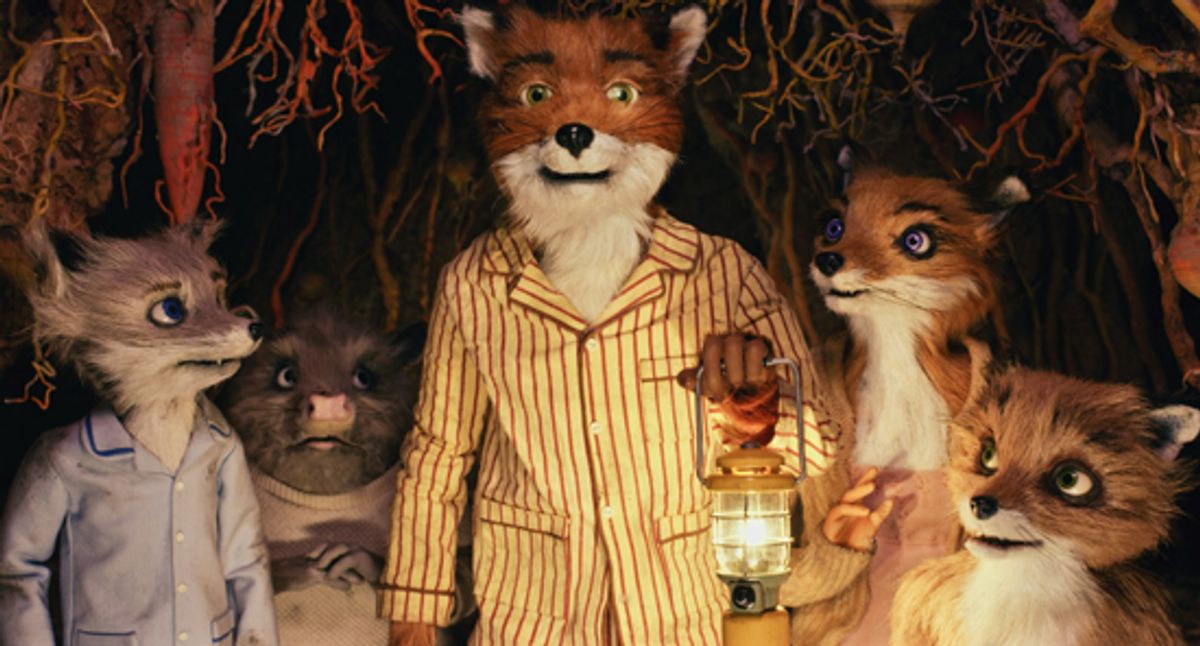 There should be something incongruous about the sound of George Clooney's cashmere-flannel voice coming from the mouth of a somewhat rangy-looking fox in a country gent's corduroy suit: Why should a matinee idol suffer the indignity of being trapped in a puppet's body? But from the first minute of the Wes Anderson stop-motion-animated feature "Fantastic Mr. Fox," Clooney is that creature, the genuinely fantastic Mr. Fox of the title, a rapscallion charmer who wears many hats: husband, father, newspaperman, chicken thief. It's one thing for an actor to feel comfortable in his own skin; it's another for him to feel completely at home in the body of a fake-fur and metal-armature vulpus vulpus. And yet Clooney's naturalism is of a piece with the joyous, marvelously detailed movie around him, adapted from Roald Dahl's novel with adventurousness and seemingly boundless love by Anderson and Noah Baumbach. "Fantastic Mr. Fox" is possibly the finest picture about family, community and poultry thievery ever made.

Early in "Fantastic Mr. Fox," the youthful, wily Mr. Fox learns that Mrs. Fox (Meryl Streep) is pregnant. He vows to quit his life of crime and start making an honest living, the better to care for his new family. Fast-forward several fox years: Mr. Fox is now a newspaper columnist, and the dapper-yet-casual cords he used to wear appear to have been put in storage. Now his skinny arms, with their furry elbows, dangle from the awkwardly utilitarian short-sleeve shirts he now wears. Mrs. Fox is happy enough in the hole in the ground where the family now lives. But Mr. Fox wants more: He likes trees, grass, action. And so he leaves for work one day -- first casting a baffled glance at the superhero-cape and pants-tucked-into-socks outfit his weirdo son, Ash (Jason Schwartzman), is wearing -- and goes straight to see his lawyer, Badger (Bill Murray), to investigate the possibility of purchasing a new home inside a shady tree.

Clearly, it's midlife-crisis time for Mr. Fox, who not only moves his family into that new home but reenters a life of crime, enlisting the help of a spacey possum, Kylie (Wally Wolodarsky), to infiltrate the fortresses of three very rich, and very mean, local farmers: Boggis (Robin Hurlstone), Bunce (Hugo Guinness) and, the nastiest of them all, Bean (Michael Gambon). Before long Mr. Fox's mild-mannered, yoga-enthusiast nephew, Kristofferson (Eric Anderson), a gifted natural athlete, is also reluctantly pulled into the act, to the annoyance of the scrawny, disaffected kit Ash, who yearns to be a star at something and feels he's good at nothing.

Dahl's novel is slim and exciting: It covers, in a very small number of pages, the Fox family's efforts to dig themselves deeper and deeper into the ground in order to escape the farmers, who have become obsessed with destroying them. Other woodland animals have also become displaced by the farmers' aggressive mania, and so Mr. Fox and his family, in addition to saving themselves, come to the aid of their homeless neighbors. They do this, of course, by stealing -- this is, after all, a Roald Dahl story, with all the vaguely disreputable pleasures that implies.

There's a crotchety generosity to Dahl's work, too, which Anderson and Baumbach have captured perfectly here. To fill out a feature-length movie, they've had to expand upon and embroider Dahl's story, but they've done so without bloating the picture or overloading it. "Fantastic Mr. Fox" feels colloquial and modern: When we first meet Mrs. Fox, she's wearing an Indian-style tunic decorated with braid embroidery, a favorite hip-mom uniform among young mothers everywhere. And Mr. Fox, early in the film, explains apologetically, "I used to steal birds, but now I'm a newspaperman," perhaps a reflection not just on his lost, wild youth, but on the fact that he's moved on to a profession that's pretty much facing extinction itself.

But "Fantastic Mr. Fox" also shows a sense of protectiveness toward the past, largely because of the somewhat rough-looking, slightly jerky (by digital-animation standards, at least), folk-art-style stop-motion animation technique Anderson has chosen. The puppets, with their kind-of-crazy eyes and even crazier whorls of fur, capture the spirit, if not necessarily the specifics, of the cheerful, mildly insane Quentin Blake illustrations that accompany Dahl's text. Anderson and his team (including, of course, a large crew of animators, as well as production designer Nelson Lowry and director of photography Tristan Oliver) pay a great deal of attention to texture and movement: The animals' fur swirls every which way, in accordance with their movements; even Mr. Fox's suits were reportedly modeled on the corduroy and tweed ones Anderson himself favors. (The puppet makers went so far as to obtain fabric swatches from Anderson's tailor.)

Anderson also has a great deal of fun contrasting his fantasy foxes with their real-life counterparts in nature: His foxes walk and speak with the most elegant manners -- it doesn't hurt that the structure of their legs makes it look as if they're walking on tiny high-heels. They hover over exquisitely prepared platters of food, savoring the delicate blend of aromas -- and then descend upon them, suddenly realistically foxlike, snuffling and snarfling and sending food flying all over the place.

There's so much to look at, and to giggle over, in "Fantastic Mr. Fox": It has style and wit and heart, without ever being overly whimsical, a trap Anderson has too often fallen into. "Fantastic Mr. Fox" could turn out to be the one movie Wes Anderson naysayers end up loving, and the one his loyal fans treat as a lesser accomplishment, a trifle. Anderson has always frustrated me: On the plus side, I can sense that he tries to work from the heart, and he certainly cares about craftsmanship. But nearly all of his movies, until now, have suffered from self-conscious quaintness, and their flat, homespun quirks have left me cold. "Fantastic Mr. Fox" is different: The story is a great canvas for Anderson's visual inventiveness (offering, for one thing, lots of opportunities for those cozy, dollhouse-style cross-section views he loves, showing various creatures going about their routine daily activities). It also revisits, in subtle and wonderful ways, many of Anderson's key themes, among them the prickly pleasures of being part of a jovial, like-minded community -- or of a mismatched family. In one of the movie's loveliest moments, the cousins Ash and Kristofferson, unable to breach their differences, fume and argue in their cramped, shared bedroom. Unable to sleep, they creep out of their beds to watch a tabletop model train clickety-clack around its track in the darkness, momentarily distracted and enthralled by the blinking colored lights and the soothing, tinny whir of its engine.

I'm not sure I can explain why Anderson's trademark dry, clever patter seems less tortured, and so much funnier and more believable, when it's emerging from the mouths of animal puppets with scruffy, disarranged fur. But "Fantastic Mr. Fox" is one of the few recent movies I can think of that truly captures the vibe of a childhood spent largely with books. I'm not talking about the overrated notion of "being returned to a sense of childlike wonder," or anything like that. I'm talking about a movie that captures something even more intangible than that, the very texture of an experience: Looking at all the details in "Fantastic Mr. Fox" -- the character's wayward whiskers, their little vests, the mansionette hideaways they've dug for themselves in the ground -- brought back the quiet, intense joy I felt as a kid, first poring over illustrated details in picture books (the nooks and crannies of Beatrix Potter's rabbit warrens and mouse houses, for example) and later in the semi-fanciful, semi-naturalistic details to be found in Kenneth Grahame and A.A. Milne and Dahl.

"Fantastic Mr. Fox" is an intricately detailed and accomplished piece of work. (It amazes me that 2009 has brought us not just one but two dazzling stop-motion-animated pictures, the other being Henry Selick's gorgeous and spooky "Coraline," adapted from Neil Gaiman's equally terrific children's novel.) And yet what's wonderful about it is how casual and free, how un-fussed-over, it feels. Anderson is clearly taking a stand against the strained realism (make that "so-called realism") of digital animation, up to and including the repellent motion-capture technology that has turned the once-fine filmmaker Robert Zemeckis into a zombie. And in the end, Anderson's picture is more wondrous in the ways that count, more palpably believable within its fantasy world, than anything Dreamworks and -- yes, I'll say it -- Pixar (with the notable exception of Brad Bird's projects) has come up with.

As a work of animation, and of art, "Fantastic Mr. Fox" is wily, clever and mischievous, without ever being too arch or knowing. It also has the distinct aura of something that's been made entirely by hand with care and affection -- a few misshapen nubs here and there only add to the charm. Anderson has pulled off the most elusive of goals: He's made a nonchalant masterpiece, a movie that feels dog-eared and loved before it's even reached our hands.