What do these religiously motivated terrorist acts tell us?

Why are we so selective about lessons we draw from religious extremism?

"It was a pleasure and an honor to serve my God," said Teitel at the Jerusalem courthouse. "I have no regret and no doubt that God is pleased."

Teitel also denied recent reports that he had operated as an undercover Shin Bet agent. .. . The indictment also lists Teitel's efforts for more than a decade to harm Arabs, gays and lesbians, leftists, police officers and messianic Jews.

From Terror in the mind of God:  The Global Rise of Religious Violence: 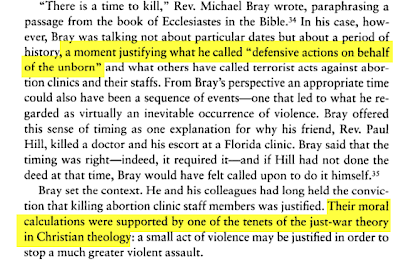 Are there any broad lessons to be drawn from these acts of religion-inspired terrorism? Do they tell us anything about Judaism or Christianity itself?  How about other similar examples from both religions?

Joe Lieberman and others have called for investigations into why an Islamic extremist was allowed to remain in the U.S. military.  Earlier this year at Salon, Matt Kennard documented how white supremacists and Neo-Nazis were being allowed to openly serve in the U.S. military, likely due to recruitment shortages for our various wars.  A former Blackwater employee alleges that CEO Erik Prince "views himself as a Christian crusader tasked with eliminating Muslims and the Islamic faith from the globe," and that Prince's company -- responsible for horrific massacres of civilians -- "encouraged and rewarded the destruction of Iraqi life."  Numerous reports have documented that Christian fanaticism is rampant in the U.S. military, including high-pressure evangelizing both within the military and in Muslim countries we occupy, and even violence justified by religious doctrine.  As Harper's Jeff Sharlet documented, organized groups within the military have emerged that view allegiance to Christianity as superior to allegiance to the Constitution or orders from superiors.  [The Israeli military is burdened by the same problem:  "Recent reports of atrocities committed by Israeli soldiers in the course of the intervention in Gaza have described the incitement of conscripts and reservists by military rabbis who characterized the battle as a holy war for the expulsion of non-Jews from Jewish land" and religious soldiers who refuse to follow orders to evict settlers because they perceive their religious duties as paramount.]  Will Joe Lieberman's "investigations" include these problems?  Should they?

UPDATE:  Also from Haaretz this week:

Rabbi Yitzhak Shapiro, who heads the Od Yosef Chai Yeshiva in the Yitzhar settlement, wrote in his book "The King's Torah" that even babies and children can be killed if they pose a threat to the nation.

Shapiro based the majority of his teachings on passages quoted from the Bible, to which he adds his opinions and beliefs.

"It is permissable to kill the Righteous among Nations even if they are not responsible for the threatening situation," he wrote, adding: "If we kill a Gentile who has sinned or has violated one of the seven commandments - because we care about the commandments - there is nothing wrong with the murder."

Several prominent rabbis, including Rabbi Yithak Ginzburg and Rabbi Yaakov Yosef, have recommended the book to their students and followers.

As indicated above, there are Christian religious leaders who preach much the same thing.  All are small minorities within their religion -- just as is true for those who kill civilians in the name of Islam -- but if we're so eager to launch investigations and draw broad conclusions from episodes like the Fort Hood shootings, we ought to be asking the same questions about episodes and people like this.