And may your first child be a feminine child

People did victory laps when my wife gave birth to a boy. Why was the reaction to our next baby, a girl, so cold? 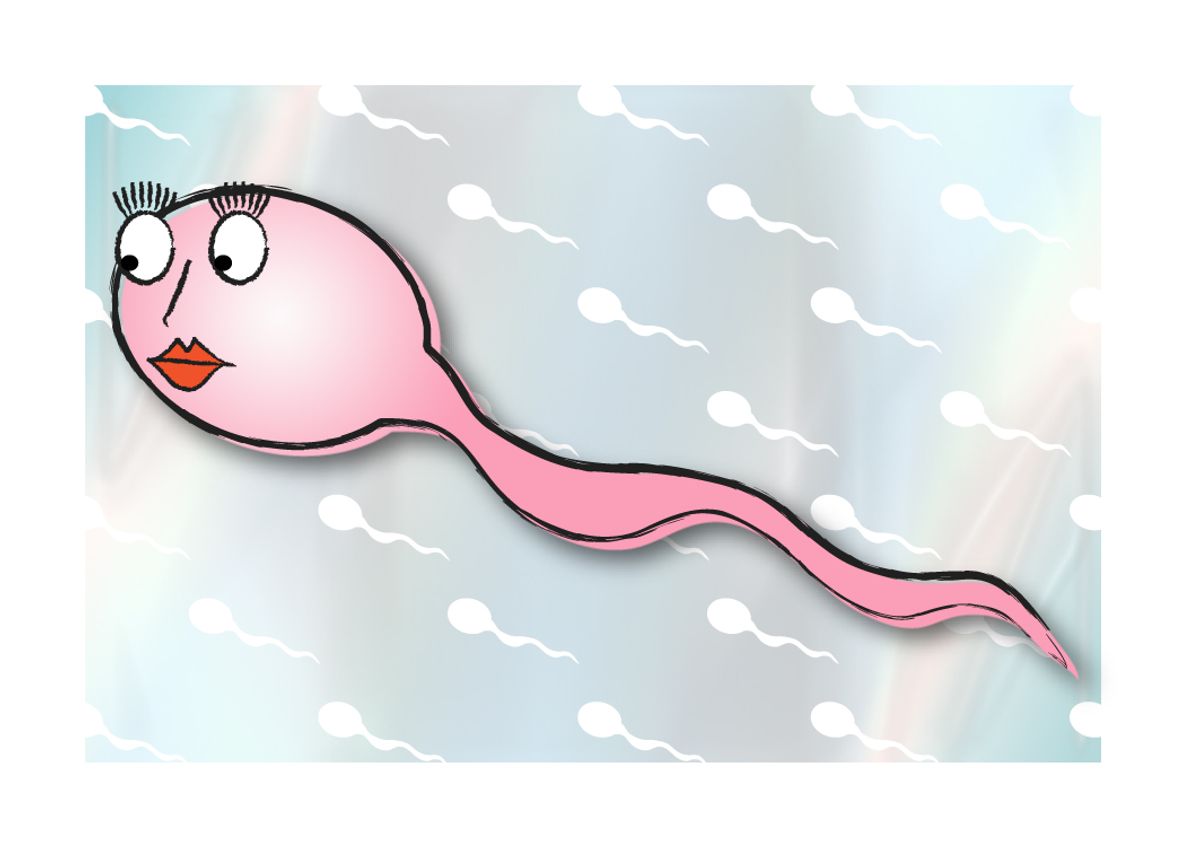 There is a scene in "The Godfather" in which the dim but faithful Luca Brasi congratulates Don Corleone on his daughter's wedding day. Nervous and eager to please, he finally delivers his much-practiced hope for the young couple: "And may their first child be a masculine child."

I'm not sure Luca Brasi would have ever found an occasion to offer his best wishes for a feminine child. He was a product of his times. Back then, you needed a male heir to inherit your sprawling crime syndicate. The idea of a woman whacking a drug-peddling upstart over a plate of clams never even crossed poor Luca's frontal lobes.

But those days, like Luca Brasi, swim with the fishes. Boys are falling behind in the workforce, in higher education, and at primary academics. According to the Associated Press, even the sprawling crime syndicates of Italy are now enjoying an era of unmatched chromosomal diversity at their highest levels. With the ascension of the double X and the supposed decline of the Y, you might expect the birth of a girl to be heralded with, at least, an equal sort of excitement to the announcement of the birth of a boy. And yet, as 18 million cracks appear on the highest of ceilings, perhaps we should train our gaze a little lower to the first ceiling our daughters encounter: the middling enthusiasm toward the impending arrival of a baby girl.

Or maybe it's just me.

I remember the sonogram tech revealing that our first child was a masculine child, in the same way I remember Oprah revealing she had given her audience members cars. "Look under your seats and you'll find your ... BAY-BEE'S PEEE-NIS!!”

I screamed until I lost my voice and nearly knocked out the sonogram tech jumping up and down wildly, crying while clutching my keys close to my chest.

To be fair, “baby” was a foreign enough concept for my 27-year-old brain to deal with. Telling me that I had to figure out how to raise a “girl” -- one of the other great mysteries of my life -- would have seemed about as intimidating as informing me that it was my job to figure out how to fix the Large Hadron Collider. It would have ended with me living under an assumed name outside of New Braunfels, Texas.

Regardless, I found myself doing the baby boy victory lap.

I was excited about having a boy, but I was also excited because I had endured a good deal of ball-breaking from my guy friends before the gender had been determined. My buddies ribbed me about having a yucky girl baby. One friend went so far as to assure me my wife and I would only have girl babies for future pregnancies as well. It would be a plague on my house -- a plague of girls.

When it turned out the curse had been lifted -- or, more precisely, that it never existed -- I admit: I crowed.

After that opening salvo of macho banter, I began to wonder if we speak about the sex of our impending children in vastly different ways and if the reservations about baby girls were not just limited to juvenile 20-something dudes. But it wasn't until we were expecting our second child, two years later, that the question transitioned from a passing curiosity to a legitimate concern.

From the time my wife announced her pregnancy, I knew she'd be having a girl. At 29, I had begun to experience a personal sea change, as the motivational speakers say. And maybe, on some level, I had known for a while a baby girl was coming, and I didn't want her to grow up with a lefty hypocrite father: “Baby girl, you can be anything you want to be ... as long as it doesn't interfere with your brother's success.” After all, I want my children to grow up and resent me for the right reasons, like my emotional unavailability and my middle-class white male rage.

The first eight months of my wife's pregnancy were full of bizarre and polarizing gender issues outside our home, unfolding as it did during the candidacies of Hillary Clinton and Sarah Palin. The less-than-stellar response to an estrogen-fused battle for the White House seemed to parallel, on a macro level, my one-time fear of welcoming a baby girl into my own house. And I found myself shifting from being a Howard Dean-style frat-house Democrat to a Jezebel-reading, Hillary-supporting Democrat who no longer used the word "bitch." Well, not every 15 minutes, anyway.

Armed with this new sense of feminine awareness (and, perhaps, a lingering embarrassment about my previous attitude), I became hypersensitive of how other people reacted to our little girl's imminent arrival.

A kind of pitying, you-lose sentiment was common among dads without daughters. They always delivered some polite variation of, “Dude, that sucks." Or, "What are you gonna do with a girl?” I remember talking to a friend whose second son was born with a heart defect that required two open-heart surgeries before the kid's first birthday. When I mentioned how impressed I was with the way he and his wife shouldered such difficulty he said, with a sigh,"It's been rough." He then slapped me on the back before continuing, "I'm just glad we didn't have a girl. Good luck with all that!"

As for women, well, they never went that far, but even their enthusiasm seemed dialed down. During our son's birth, the blue-haired waitresses at our favorite diner had been kind enough to act as my wife's unofficial pregnancy support group. They doled out advice on anything from sleep deprivation to breast-feeding. And when it came to gender, the decision was unanimous from every waitress in the joint: Boys are easier than girls, and girls are difficult and demanding, and then they turn into teenage girls and then they're at their worst.

This line of thinking was not confined to the old-school atmosphere of Bob's Diner either. I remember one of our hipper neighbors responding to our news by griping about how easy her three boys were versus her 11-year-old daughter, a constant source of aggravation. The girl rolled her eyes but bore this proclamation with a surprising dignity, considering that her mother was standing next to her at the time.

Even my perpetually sensible Indian pediatrician ended my daughter's first checkup by saying, “Little girls are very special. But then they turn into teenage girls, and you want them to just go away.”

This wasn't exactly the stuff of Maurice Chevalier.

It's true that an occasional mom without a daughter experienced an obvious moment of longing. Dads who already had girls were congratulatory enough. But dads who only had girls seemed, at times, to be overcompensating, trying too hard to prove just how cool they were with it. One gentleman earnestly regaled me with the hidden charms of "High School Musical" and the Jonas Brothers. It was petrifying. It just didn't seem like anyone was that pumped about the whole thing. I refuse to include grandparents here; they would have been happy if my wife had delivered a Labrador.

When my wife and I told people we were having a boy, their faces would light up, their eye-smiles would have made Tyra Banks proud. People radiated a sincere and palpable joy at the idea that another Y chromosome would be added to the global gene pool. But when it came to my daughter the only unbridled enthusiasm I remember came in relation to the fact that we already had a boy -- thus creating the “Rich Man's Family” (a very important concept in my Philadelphia neighborhood). I'd never heard of it before. I have heard about it almost weekly since my daughter was born.

For my part, I can honestly say I was just as excited about my daughter as I was about my son. And she's even better out of the belly. Turns out, while we have years before we have to negotiate her first bare-midriff prom dress, none of the dire prophecies about her demands or attitude have come to pass. In fact, she is a calming counterbalance to my son, who takes after his hyperactive mother. My daughter is laid-back. At 10 months old, she's grunty and built like a linebacker and beautiful and perfect, and she makes me want to be a better father, one who takes risks and stakes out my own success. Her first real word was "Orca," as in the whale, and that is awesome. I love her with every rapidly aging fiber of my being.

But I sometimes wonder if I would feel the same way if I did not already have my masculine child. If she had come first. Would I have been as excited about her arrival? Would I love her just as much? Or would I feel like something was missing?