I have Palin fatigue already

Her rehab tour is about Sarah Palin Inc. not 2012, but her appeal reflects an anti-elite anger Dems can't ignore 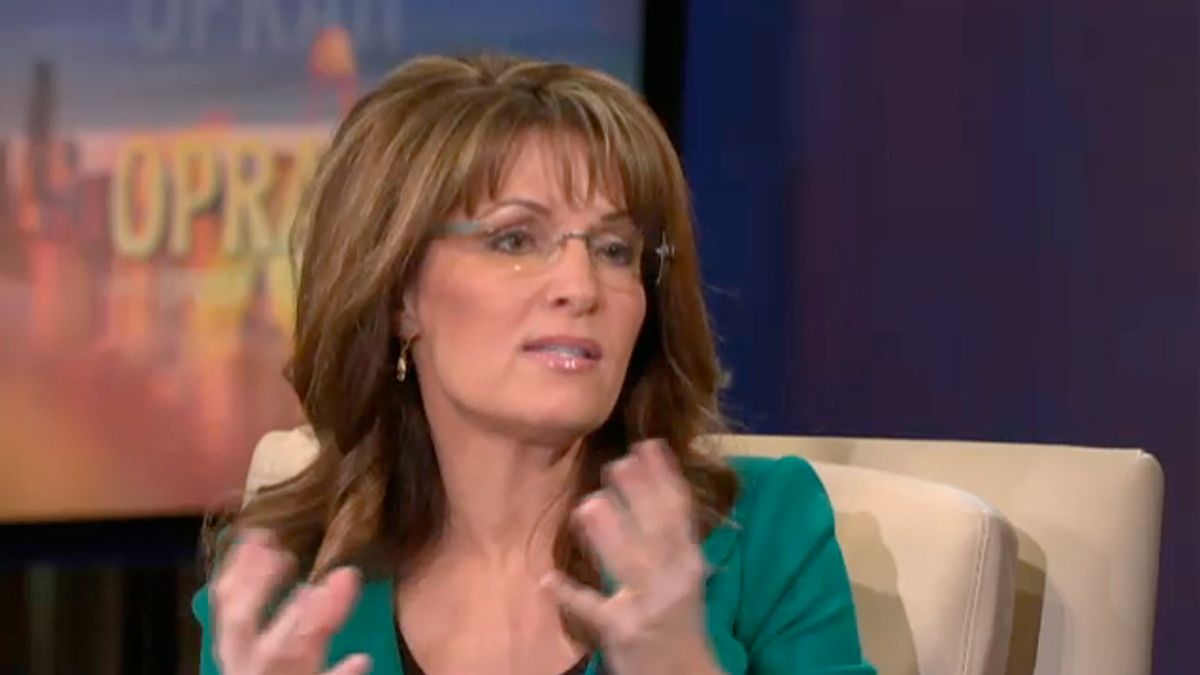 I've gotten e-mail and Twitter messages begging me to ignore Sarah Palin's return to the national conversation, from her Oprah appearance to her book debut to the icky, Sarah-in-shorts Newsweek cover (I sure am glad Jon Meacham decided to make his mag the classy one, all about ideas!) and everything in between. I can't make Salon a Palin-free zone (nor do I want to). All I can do is promise to ban the term "Palinpalooza" from the pages of Salon. Done.

Now that her Oprah appearance is over – and boy, did Oprah let the liberals in her audience down; what a waste! – let me confess to my own Palin fatigue. I just can't take seriously the idea that she'll ever be president, even after her moderately successful softball game with Oprah. Palin sealed that fate when she quit being governor (although maybe she can run with Lou Dobbs on the All Quitters ticket in 2012). She'll never obtain the record or the reliability she needs to run credibly for president now that she gave up the modestly challenging job of running Alaska. I don't see her ever having the self-discipline or the humility to admit how very much she'd need to learn to be remotely qualified.

On top of everything else, she seems like a vindictive, spiteful person, judging from her reputation in Alaska politics, her open warfare with the McCain campaign and her juvenile tit-for-tat with her 19-year-old grandbaby-daddy Levi Johnston. If she can't brush off Levi's provocations, how would she handle Ahmadinejad? Or Joe Lieberman? I'll even allow that there's some sexism in the equation: Women suffer more from being perceived as vindictive and spiteful than men do. (It clearly didn't stop George W. Bush or John McCain.) Not fair; still true. But to be completely fair, McCain and even Bush accomplished more than Palin in the same life span, which maybe made their vindictiveness a little bit less defining than hers.

The main reason not to fear a President Palin can be seen in recent polling among independents and moderates. In a the most current ABC News/Washington Post poll, Greg Sargent drilled down to find that: only 37 percent of independents and 30 percent of self-described moderates think she’s qualified for the presidency, and 58 percent of moderates view her unfavorably. Even more intriguing (but not surprising): Palin's approval rating with men is higher than with women, 48 percent to 39 percent, and just a third of women believe she'd be qualified to be our first female president. (So much for Palin's appeal to Hillary Clinton fans!)

So I think the Sarah Palin rehab tour is more about Sarah Palin Inc. than Sarah Palin 2012. She'll rack up the speaking fees, raise some money for red-state, red-meat Republicans, further polarize the party and live the high life she thinks she deserves. Still, even as I dismiss Palin as a serious GOP threat, increasingly I believe that the faux-populism of the right is something to worry about. It may be fun to mock Sarah Palin, but Democrats shouldn't laugh at many of the people who admire her – who see a folksy, new kind of self-made mom trying to fight the bad old Eastern elites.

Two great blog posts last week made me worry: Timothy Egan's "The Betrayal," and my friend Digby's "What if they don't," about how liberals are too complacent that moderate Republicans and the rest of the country will laugh off the likes of Palin, Dobbs, Tom Tancredo and all the silly nutjobs who listen to them.

Egan intensified my growing fear that Democrats may be unable to ride the rising tide of populist rage, given their ties to Wall Street and K Street. "If health care reform gives people a choice, and doesn’t just fatten the rolls of insurance companies, it will be something to run on," Egan wrote. "If the recovery helps millions of people who don’t have a well-staffed lobby in Washington, it too will be a plus." But Egan made a good case that the party increasingly identified with Goldman Sachs may well pay at the polls nationwide in 2010, as Jon Corzine did in New Jersey this month.

So while I'm not worried about President Palin, I remain worried about President Obama. I'm particularly concerned that his increasingly triangulating, anti-deficit administration will do the wrong thing, morally and politically, and move to the right, without understanding that some right-wing rage could be rechanneled by acknowledging its roots: That the economic system seems rigged for the have-a-lots v. the have-a-littles, and despite their promises, the Democrats haven't done enough to change that. Palin can't change any of that, but Obama can. There's still time for him to do so, but the clock is ticking.