Want to win some props for your masterpiece? We can do that -- for a price 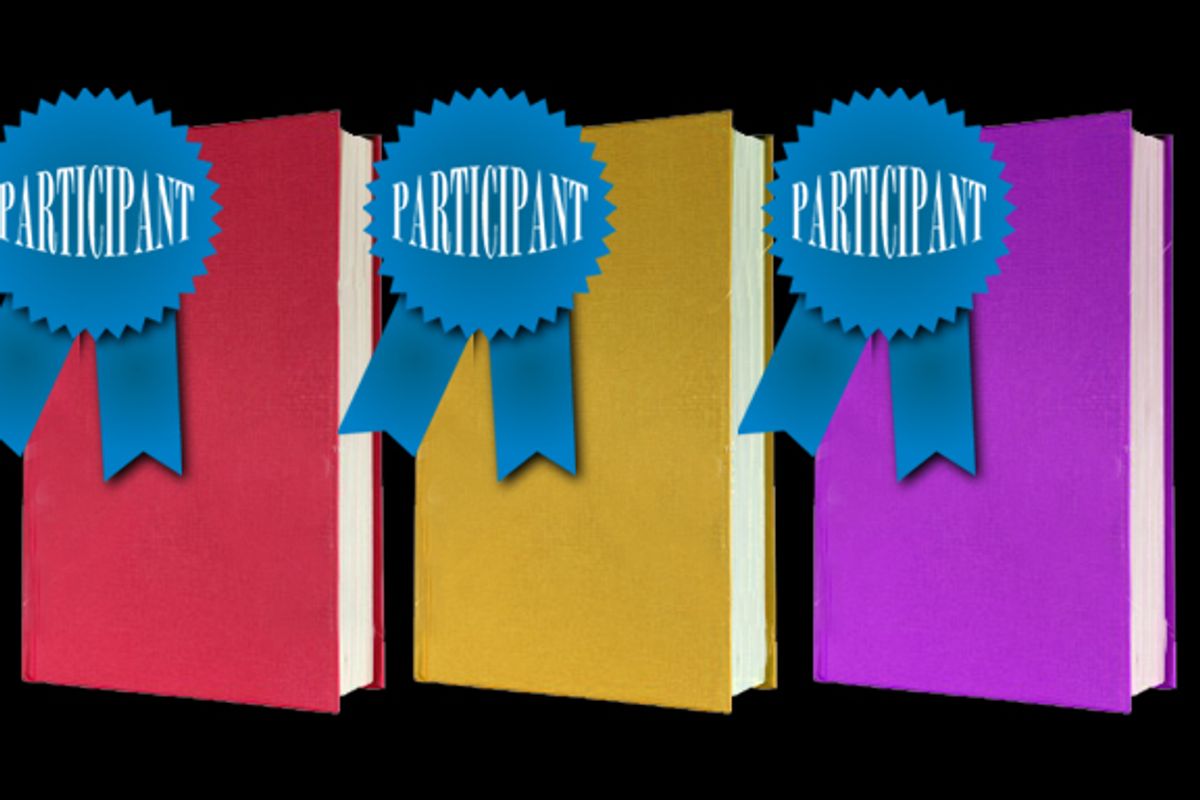 The National Book Foundation will present its annual National Book Awards in downtown Manhattan Wednesday night, at a gala event in the glittering, Greek-revival setting of Cipriani Wall Street. The ceremony's organizers labor mightily to bring glamour to a notoriously dowdy industry, and no doubt the evening will be thrilling for both nominees and winners.

Literary awards are more than just ego boosts these days. As the critic James Wood observed a few years back, "prizes are the new reviews," the means by which many people now decide which books to buy, when they bother to buy books at all. There are some 400,000 titles published per year in the U.S. alone -- one new book every minute and a half -- according to Bowker, a company providing information services to the industry, and there are fewer people with the time and inclination to read them. If you only read, for example, about five novels per year (a near-heroic feat of literacy for the average American), you could limit yourself to just the winners of the NBA, the Pulitzer, the National Book Critics Circle, the Booker Prize and then, oh, a Hugo or Edgar winner -- or even a backlist title by that year's Nobel Prize winner. You'd never have to lower your sights to anything unlaureled by a major award.

On the other hand, if you've just self-published a book on parrot keeping or your theories on how the world could be better run (a favorite topic of retired gentlemen), what can you do? If you weren't able to find a publisher who wanted it, you can also expect to be routinely disqualified for review in the general media and, above all, for prizes. Yet have no fear, you Cinderellas of the publishing game, because (to nab a line from someone else's promotional campaign) there's an app for that.

An e-mail press release for a book crossed my desk not long ago, prominently garnished with a large medallion proclaiming it a winner of "The National Best Books 2009 Awards." For a moment, I misread that as "National Book Award," and did a double take, which is surely what whoever came up with that name intended. Curiosity about the National Best Books 2009 Awards led me to the Web site for USA Book News, produced by an outfit called JPX Media, which claims offices in Los Angeles and New York.

USA Book News is essentially a roll of press releases, featuring reproductions of the covers of relatively new books, accompanied by their flap copy and links to author Web sites. It's a somewhat random mix of titles, ranging from the very high profile, such as Dan Brown's "The Lost Symbol," to the solid mid-list, like a new biography of Clint Eastwood, all from established publishers. Any self-published author would be pleased to see his or her book in this respectable company, although the company itself would be oblivious to the fact. "I have never heard of this site, was not asked; nor was I informed that my book was listed there," Shel Israel, author of "Twitterville: How Businesses Can Thrive in the New Global Neighborhoods," replied to my e-mail inquiry. To the extent that any mention might help an author, he's pleased to be included, but "I have no evidence that this listing has helped me in sales."

Why bother to set up a Web site regurgitating cover art and promo copy that anybody can find on Amazon.com? The answer, of course, lies in the National Best Books 2009 Awards, a contest that features no fewer than "150 active categories," including three subcategories of "Animals/Pets" and 13 subcategories of business books. There's a prize for the best children's book on the theme of "Mind/Body/Spirit" and for the best history of media and entertainment. By all indications (JPX Media did not respond to phone calls requesting information), everyone who enters in any category winds up listed as a "finalist," and some categories are so specific ("Mythology & Folklore") that they have only one entry.

Best of all, as USABN's Web site freely promises, "the National Best Books Awards are the ONLY Awards Program in the nation that offers direct coverage to the book buying public for every entry." Like the Special Olympics, this is a competition that everybody wins. If you enter the 2010 contest by the end of this year, they'll even throw in a "six-month full-color listing on USABookNews.com," which is "valued at $1500.00!" despite the fact that none of the publishers whose books are listed there now seem to have paid for this service or even to be aware that it's been provided.

Every winner and finalist -- i.e., everyone who enters -- can purchase gold medal-style stickers announcing the fact, which can then be slapped on the cover of the book, making it look deceptively similar to books that have won legitimate prizes like the Newbery Medal. The fee for all this is $69 (about what you'd pay to nominate your book for the National Book Awards or the Pulitzer), though you do have to pay it for each category you wish to enter; if, say, you want to send in your children's book about Mind/Body/Spirit issues in the history of the media, you'd have to pay $138 to enter it in both categories.

That's still not much cash to shell out for a bogus award that will impress those friends and relatives who haven't heard of the National Book Awards in the first place and will perhaps even (briefly) deceive the few who have. Yet with 150 categories, the takings do add up. A press release for the National Best Books 2009 Awards claims "500 winners and finalists," which comes to the nonshabby sum of $34,500 (and that's before whatever markup they get on the stickers) -- not bad for the cost of setting up a basic Web site with content that can be cut and pasted from the Web in an afternoon or two. Nowhere on USA Book News does it say who, if anyone, actually reads the books submitted to the awards; presumably, the winners could be chosen at random.

In short, the National Best Books Awards are vanity book awards, a new twist in the age-old practice of profiting off the dreams of aspiring writers. Ironically, real awards like the NBAs may not be that much better at selling books than the NBBAs. As publishing maven Michael Cader recently told the Wall Street Journal, the fiction nominees for the NBA "tend to be as a group not commercially successful, and the act of being nominated spurs modest commercial interest but tends not to drive sales in any significant quantity."

It's quite possible that someone who wins an NBA tonight will have earned less in royalties from his or her book than JPX Media will make by running a fake-out of the NBAs. There's simply more money in selling services to would-be writers than there is in selling actual books to readers, since the former are rapidly coming to outnumber the latter. And that, certainly, is nothing to celebrate.