John Woo on "Red Cliff" and the rise of Chinawood

Back home after 17 years, the action maestro has created his biggest spectacle -- and rebooted China's film biz 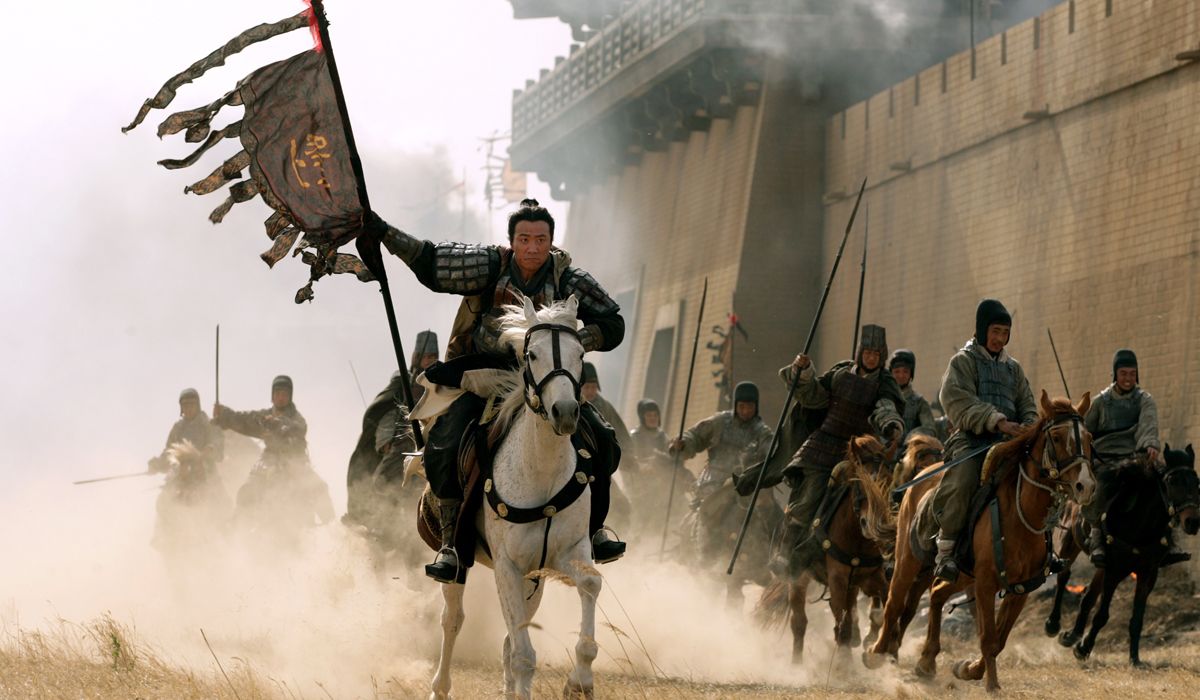 When John Woo left Hong Kong in the early 1990s, a few years before the then-British territory was to be handed over to the People's Republic of China, it clearly marked the end of an era. Although he was hardly the only important Hong Kong filmmaker, Woo symbolized the sudden global emergence of the territory's highly choreographed action cinema. With pictures like "Bullet in the Head," "The Killer," and the "Better Tomorrow" series, he had personally elevated the violent police thriller to implausible levels of symbolism and visual poetry.

Woo's move to Hollywood suggested that Chinese authorities might have trouble convincing the best talents in Hong Kong's film industry to stay home, under what was presumably going to be a censorious and intrusive regime. It also suggested that however corporatized mainstream American film had become, it could still attract exciting directors from overseas. Indeed, while Hong Kong studios struggled with budgets and distribution problems over the next few years, Woo became a certified Hollywood hitmaker, directing the cult faves "Broken Arrow" and "Face/Off," along with the Tom Cruise vehicle "Mission: Impossible II," which grossed $565 million worldwide.

But you can go home again, it appears. When I caught up with Woo for a few minutes on the phone recently, the 63-year-old action legend was partway through a whirlwind American tour to promote a film he calls the biggest and most ambitious he's ever done -- a massively-scaled, visually spectacular historical epic called "Red Cliff" that was entirely conceived, financed and made in China. He was also serving as a de facto spokesman for China's burgeoning campaign to build a new global film industry that can compete on equal terms with both Hollywood and Bollywood. Yeah, if the suits in west L.A. haven't made the logical deduction yet, they might make it now: Chinawood is coming, and it's going to be a very big deal.

This isn't an entirely new phenomenon, of course. From "Crouching Tiger, Hidden Dragon" to "Hero" to "Curse of the Golden Flower," productions financed or co-financed by China's film industry have occasionally combined big budgets with artistic vision and become hits on a global scale. But "Red Cliff" has definitely kicked the game up a notch, and you have to wonder whether veteran Chinese filmmakers like Chen Kaige and Zhang Yimou are feeling disrespected. Woo spends a dozen years in L.A. living the high life with Tom Cruise and Nic Cage while they're making serious films, and then he gets to come back and become a huge national hero.

After protracted discussions with Chinese authorities, Woo got near-total carte blanche to come home and make this long-contemplated dream project, one for which Hollywood producers had displayed little enthusiasm. In the process, Woo -- a devout Christian who is widely assumed to be anti-Communist -- has clearly been tasked with driving Chinese cinema in a more commercial direction. "I have learned so much from Hollywood," Woo told me, "and I thought it was about time to bring what I have learned in Hollywood back to Asia. There are so many young and talented filmmakers in China. I think it's great for them to have the chance to work on a big-budget, Hollywood-type movie. To learn some new spirit, you might say."

Whether Chinese film really needs an injection of Hollywood's spirit is very much open to debate, but the Chinese authorities, like Woo himself, are thinking big. Woo's grandiose retelling of the 208 A.D. Battle of Red Cliffs, between Han Empire forces and the rebellious kingdoms to the west and south -- a legendary conflict as well-known to Asians as the Trojan War is to Westerners -- veers, like most of his films, from the portentous to the breathtaking (and is often both at the same time). It combines Asian action cinema and Hollywood-style CGI effects in truly dazzling fashion and on a scale never seen before. And it's become the biggest-grossing release in Chinese history (breaking the record previously held by "Titanic"), and a record-breaker in several other Asian countries as well.

Unfortunately, American moviegoers will only see a sliced-'n'-diced version of "Red Cliff," edited down from the two-part, five-hour opus that played in Asian markets to a single, 148-minute release stitched together with voiceover narration and explanatory on-screen titles. This only drives home the point that "Red Cliff" wasn't made for Americans; its release here by Magnet, a genre-oriented offshoot of Magnolia Pictures, is almost an afterthought by comparison. (Woo says the full-length Asian version will eventually be released here on DVD; you can probably find it now, if you know where to look.)

Despite the occasional clunkiness of the foreshortened "Red Cliff" and its ancient-world setting, it's unmistakably a John Woo movie. (I haven't seen the full-length version.) It's built around patterns of male friendship and enmity, a deadly feud over a beautiful woman who represents the domestic bliss Woo's violent heroes always yearn for, and three or four of the most elaborate action sequences ever filmed. (Yes, Woo devotees, there are still doves. Lots and lots of doves!)

Woo says the climactic, three-stage naval battle that lends the movie its name involved building two dozen or so full-size wooden warships, creating many more digitally, and shooting with four different filmmaking crews: a first unit to capture the principal action, a second unit, a stunt unit and a special-effects unit. "We had to shoot all kinds of live-action scenes while the ships were actually on fire," he laughed. "We CG'd the rest of the ships and the rest of the fire, but a lot of it is real. And we were shooting against bad weather. It was extremely cold and we were facing high winds. We had to get creative in every shot. This was definitely the biggest movie, and the toughest movie, I've ever tried to do."

Given that the historical battle of Red Cliffs took place 1,800 years ago, and the best-known account is a fictionalized version written in the 13th century, more than a millennium later, Woo and his writing team felt free to simplify and amplify the story as they see fit. Three of Asia's biggest male stars play the principal roles: Tony Leung plays Zhou Yu, the rebel hero who joins forces with Zhuge Liang (Takeshi Kaneshiro), a rival kingdom's military strategist, to confront the massively superior forces of Prime Minister Cao Cao (Zhang Fengyi), a nefarious schemer who has convinced the Han Emperor to go to war.

There are dozens of other characters in the mix, but none are as memorable as the ethereal Xiao Qiao (Taiwanese supermodel Chiling Lin), who is married to Zhou Yu but, of course, coveted by the evil Cao Cao, whose uncontrollable desire for her will prove to be a near-fatal failing. (No one is ever likely to accuse Woo of being a feminist filmmaker. His women come in two flavors: lovely and mysterious or tomboyish and spunky.)

Despite the wide variety of fantastical violence depicted in "Red Cliff," Woo insists he has stayed true to his code of never glorifying killing in the service of entertainment. "It's very much an entertaining film, but I think there's a human story in there too, that's important for me to tell," he said. "It's a war movie, and I like to stress that in war there are no winners. I think we have an antiwar message in there. As I'm sure you can see, I emphasize that when people get shot, there is death and tears. I think that's the way to send the right message."

Woo was able to borrow up to 1,500 soldiers from the Chinese army to serve as extras in the battle scenes and work on building sets, which gives you some idea how much national pride became officially invested in this prodigal son's homecoming. For his part, Woo describes working in his native country after all these years as "a dream come true." (He was born in Guangzhou, in southern China, and moved to Hong Kong as a child around the time the Communists came to power.)

"I've wanted to make this movie for more than 20 years," he said. "I always dreamed about making a movie like 'Lawrence of Arabia' or 'Spartacus' or 'Seven Samurai' -- that scale of movie. And I really love this part of history. This is the most famous battle in Chinese history. Anybody who grew up in China knows this story. The Japanese know it, the Koreans know it, all the other Asian countries know this story."

Seeing the audience reaction in China and other East Asian countries, says Woo, made him see the potential of a Hollywood-scale Chinese film industry. "The movie was so successful in China and Japan and that was very, very gratifying," he said. "The audience really felt so much excitement about the movie. Most Asian audiences are used to watching big Hollywood movies, which honestly are much higher quality, with the heroes and the big stars. But a movie like 'Red Cliff' has really changed their minds. It's a movie on the Hollywood scale that has so much of the Asian spirit. It has drawn the Asian audience back to the movie theater. We will have to see what happens, but I think the film industry in China will grow very fast, very fast. People in China really want to watch this kind of movie."