The administration guts its own argument for 9/11 trials

If some detainees get military commissions or indefinite detention, how can 9/11 trials be justified? 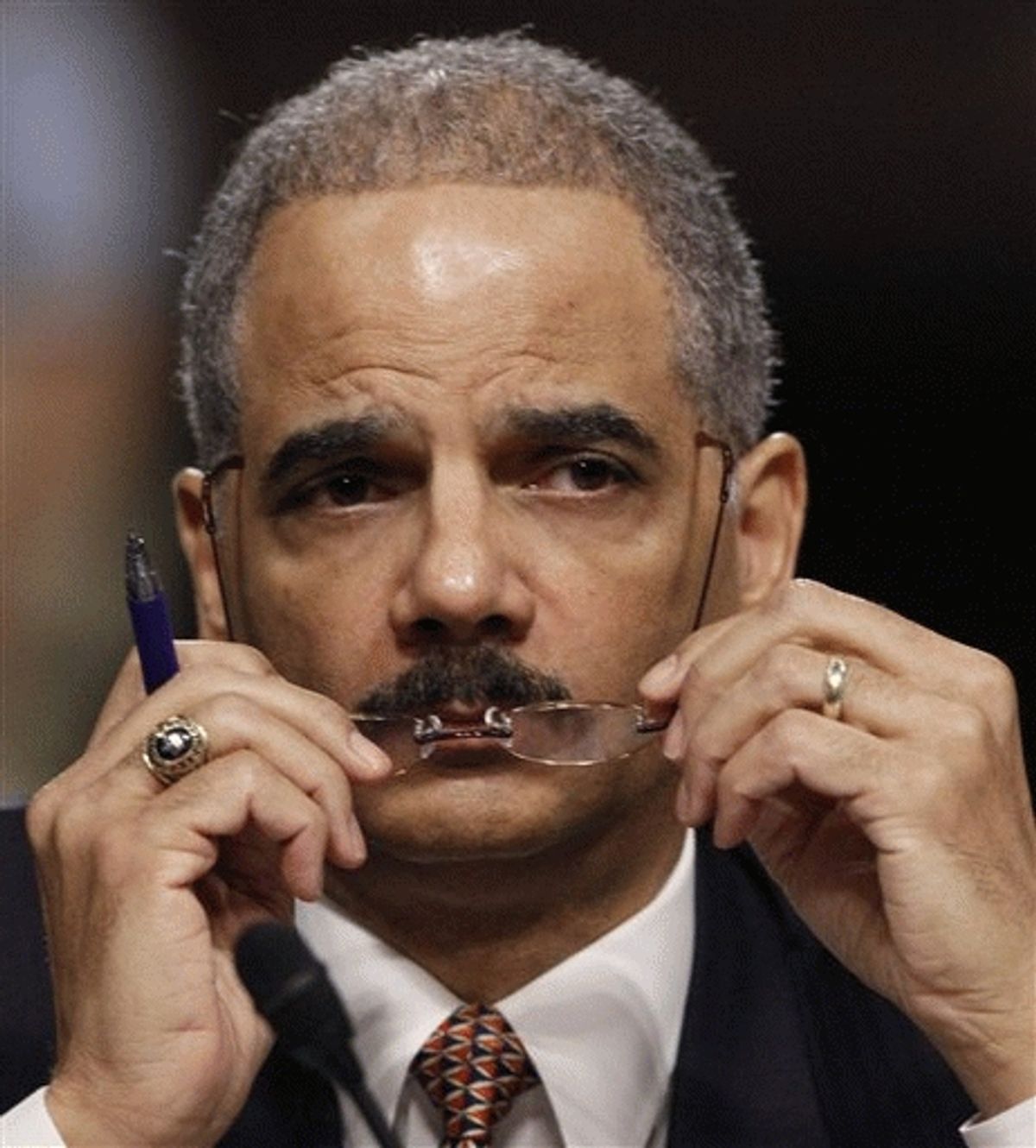 "What I'm absolutely clear about is that I have complete confidence in the American people and our legal traditions and the prosecutors, the tough prosecutors from New York who specialize in terrorism" -- Barack Obama, yesterday.

"Holder said five other Guantanamo detainees would be tried by military tribunals. The five include Abd al-Rahim al Nashiri, who is accused of masterminding the 2000 attack on the USS Cole warship in Yemen; and Canadian Omar Khadr, accused of killing a U.S. soldier in Afghanistan" -- NPR, yesterday.

"'Administration officials say they expect that as many as 40 of the 215 detainees at Guantanamo will be tried in federal court or military commissions . . . . and about 75 more have been deemed too dangerous to release but cannot be prosecuted because of evidentiary issues and limits on the use of classified material' . . . If true, that means that there are 75 so-called 'Fifth Category' detainees who might be subject to indefinite detention without trial" -- The Atlantic's Marc Ambinder, yesterday, quoting The Washington Post.

Can anyone reconcile Obama's homage to "our legal traditions" and his professed faith in jury trials in the New York federal courts with the reality of what his administration is doing:  i.e., denying trials to a large number of detainees, either by putting them before military commissions or simply indefinitely imprisoning them without any process at all?

During his appearance before the Senate Judiciary Committee yesterday, Eric Holder struggled all day to justify his decision to put Khalid Sheikh Mohammed on trial because he has no coherent principle to invoke.  He can't possibly defend the sanctity of jury trials in our political system -- the most potent argument justifying what he did -- since he's the same person who is simultaneously denying trials to Guantanamo detainees by sending them to military commissions and even explicitly promising that some of them will be held without charges of any kind.

Once you endorse the notion that the Government has the right to imprison people not captured on any battlefield without giving them trials -- as the Obama administration is doing explicitly and implicitly -- what convincing rationale can anyone offer to justify giving Mohammed and other 9/11 defendants a real trial in New York?  If you're taking the position that military commissions and even indefinite detention are perfectly legitimate tools to imprison people -- as Holder has done -- then what is the answer to the Right's objections that Mohammed himself belongs in a military commission?  If the administration believes Omar Khadr belongs in a military commission, and if they believe others can be held indefinitely without any charges, why isn't that true of Khalid Sheikh Mohammed?  By denying jury trials to a large number of detainees, Obama officials have completely gutted their own case for why they did the right thing in giving Mohammed a trial in New York.

Even worse, Holder was reduced to admitting -- even boasting -- that this concocted multi-tiered justice system (trials for some, commissions for others, indefinite detention for the rest) enables the Government to pick and choose what level of due process someone gets based on the Government's assessment as to where and how they're most likely to get a conviction:

Courts and commissions are both essential tools in our fight against terrorism . . . On the same day I sent these five defendants to federal court, I referred five others to be tried in military commissions.  I am a prosecutor, and as a prosecutor, my top priority was simply to select the venue where the government will have the greatest opportunity to present the strongest case with the best law. . . . At the end of the day, it was clear to me that the venue in which we are most likely to obtain justice for the American people is a federal court.

Does that remotely sound like a "justice system"?  If you're accused of being a Terrorist, there's not one set procedure used to determine your guilt; instead, the Government has a roving bazaar of various processes which it, in its sole discretion, picks for you based on ensuring that it will win.  Even worse, Holder repeatedly assured Senators that the administration would continue to imprison 9/11 defendants even in the very unlikely case that they were acquitted, citing what they previously suggested was their Orwellian authority of so-called "post-acquittal detention powers."  Is there any better definition of a "show trial" than one in which the defendant has no chance of ever being released even if acquitted, because the Government will simply thereafter assert the power to hold him indefinitely without charges?

I understand that sending even a limited number of Terrorism suspects to federal court is politically difficult and controversial, as the last couple of days have demonstrated.  But by refusing to embrace and defend the core principle of justice at stake here -- that a distinguishing feature of our political system is that we don't imprison or kill people without charging them with a crime and proving their guilt in a real court, and that military commissions and indefinite detention are un-American (which Democrats argued under Bush) -- the Obama administration has made it far more difficult for it to defend what it is doing, as well as for those who want to defend their decision to give trials to 9/11 defendants.

To see how that works, here is part of the exchange I had on MSNBC this week with George Pataki, while debating trials for 9/11 defendants:

MR. PATAKI: Can I respond to that, Dylan? Only the -- only the -- only the American conservatives? Then tell me why Obama and Holder are using military tribunals against those who blow up Americans in acts of war overseas?  They're just picking these particular terrorists for trial in New York because they blew up civilians in New York. So what their logic is, "Kill thousands of civilians and you can get a civilian trial; kill one or two overseas, and we're going to use military tribunals."

That makes no sense.

REP. NADLER:  I think that our tradition is that people accused of heinous crimes get trials, and they get trials in the area in which the crime is committed, which is right here. And I think it's exactly the right thing to do. . . .That's the way it ought to be, and we ought to show the world that we adhere to our traditions of justice and that these terrorists are not going to cause us to abandon the law.

MR. PATAKI: ... We are going to use military tribunals. They're saying they're perfectly fine for some terrorists, but these terrorists they're going to try here. What's the justification for that, Jerry?

REP. NADLER: Well, I -- well, I don't think there is any justification.

MR. PATAKI: I don't either.

The administration should have the courage of its convictions and defend jury trials as a linchpin of American justice, which would entail giving them to all Terrorism suspects not captured on any battlefield.  But by refusing to do so -- by exhibiting the very cowardice of which Holder accused Republicans, i.e. denying Terrorism suspects a trial -- the administration has no cogent argument to make in its own defense.  It's just another case of the administration wanting to bask in the rhetorical glory of "the rule of law" while simultaneously trampling on it for petty political convenience.

UPDATE:  The blogger Patterico -- who, notably, is a prosectuor himself and thus inclined to be empathetic with prosecutorial goals -- nonetheless compiles additional evidence to criticize Holder's decision as follows:

You can see that what we have is an administration that is choosing where to try the detainees, not based on some principle or neutral protocol (as they claim), but based on where they can win. They’re rigging the game.

And if they lose, they won’t let him go anyway.

This is just further evidence that the KSM trial will be a show trial.

It's worth reading the arguments from a prosecutor about why the administration's conduct is such a breach of basic justice, even as they cynically wrap themselves in the rhetoric of the sanctity of jury trials and the rule of law.

UPDATE II:  For a crystal clear refutation of the claim that it's normal to use military commissions for the crimes at issue here, see this comment from the always-enlightening Pow Wow, which is based on this equally enlightening interview by Marcy Wheeler of Lt. Col (and now-Law Professor) David Frakt, highlighting the numerous myths on which the case for military commissions is predicated.