She'll never be U.S. president, but her star power ought to scare the hell out of her charisma-free GOP rivals 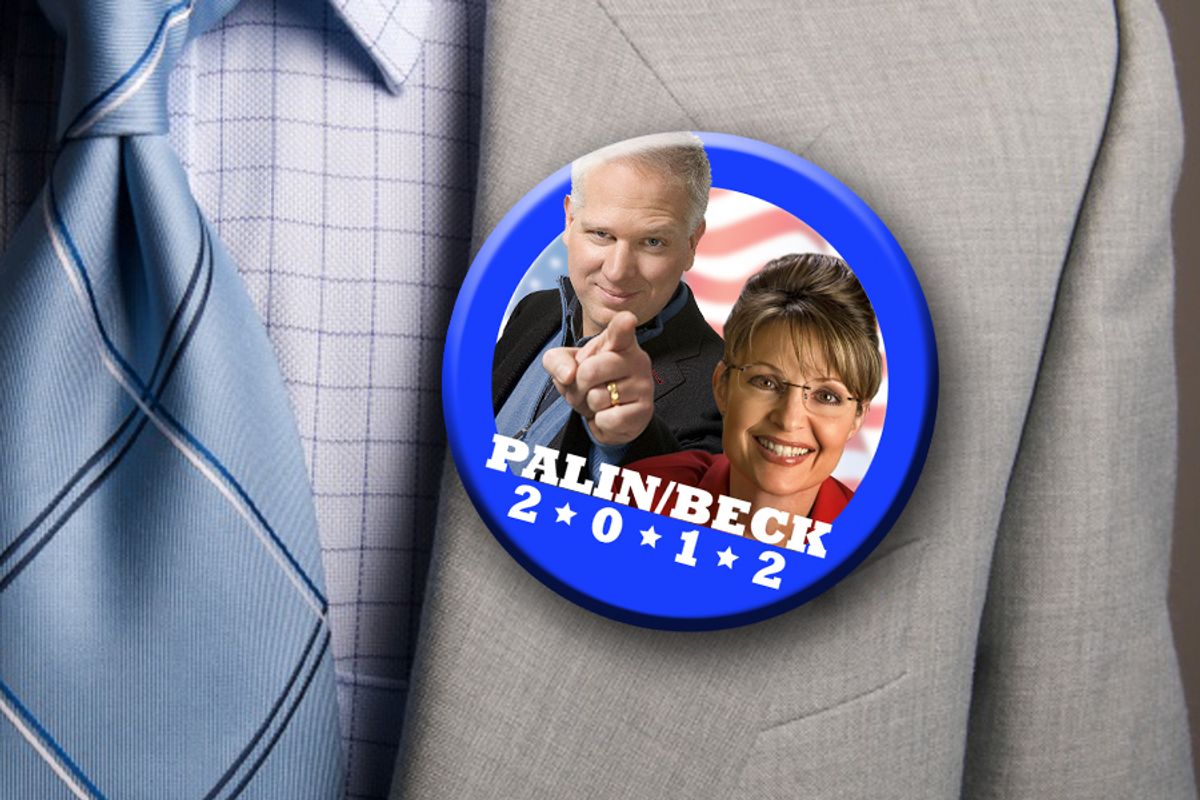 First, let me apologize for telling you all I had Palin fatigue on Monday, and then following up by writing about Palin the next two days. I kept one promise; I've kept the term Palinpalooza out of our news coverage.

But the Palin assault keeps getting more surreal, and more intriguing. Wednesday night came the news that Palin wouldn't rule out the idea of Fox News host (and professional paranoid) Glenn Beck as a possible 2012 running mate.

Newsmax reporter David Patten says Palin "chuckled" when he broached the idea, but then gave Beck his props:

"I can envision a couple of different combinations, if ever I were to be in a position to really even seriously consider running for anything in the future, and I'm not there yet," Palin told Newsmax. "But Glenn Beck I have great respect for. He's a hoot. He gets his message across in such a clever way. And he's so bold — I have to respect that. He calls it like he sees it, and he's very, very, very effective."

Once again, I agree with Palin: Beck is indeed a "hoot" and he's very, very, very effective, at lying about President Obama and whipping his paranoid base into a deluded frenzy. So what is she doing: trying to sell books to that same base -- a nice potential book market but a sliver of the electorate -- or genuinely charting her 2012 course?

Judging by Palin's erratic behavior on this book tour, and her erratic handle on the truth within the book, it's honestly hard to tell. I think, as I said Monday, she is first and foremost about Sarah Palin Inc., becoming rich and powerful, but that may well be a path to Sarah Palin 2012. I will say it again: She will never be our president. But I can't rule out her being the 2012 Republican nominee.

When you look at the charisma-free roster of likely GOP candidates -- from 2008 has-beens Mitt Romney, Mike Huckabee and "I was for trying terrorists in NYC before I was against it" Rudy Giuliani, to that hunka-hunka burning boredom Tim "T-Paw" Pawlenty -- it's easy to see Palin creaming them. On the other hand, they might spend a lot on opposition research and/or get whatever Levi Johnston claims to have. Either way, the only person I see derailing Palin from the GOP nomination in 2012 is Palin herself.

And that's still quite possible. Whether you seriously care about policy or politics, she's a train wreck. I doubt she's silly enough to seriously consider someone as deranged as Glenn Beck as her running mate; I give her enough credit to assume that was just chicken-fried red meat for her base. But just look at her soliloquy on why her hateful and false claims about "death panels" are just like Ronald Reagan's rhetoric about the Soviet Union as an "evil empire." Here's what she told ABC's Barbara Walters, in all its syntactical, self-deluding glory. She admitted there are no death panels in Obama's plans, but goes on:

"It's kind of like what Reagan used to do, though, when he talked about, say, the ‘evil empire.' You're never going to find the evil empire on a map of the world ... And yet he talked about that, in terms that people could understand -- kind of rationing down, not complicating the issue. [Just a question, does she mean "ratcheting down?" My head hurts.]

"But he, with the issue of the evil empire at the time, used those two words to get people to shake up, wake up, find out what's going on here. Now, had he been criticized and, and mocked, and, and condemned for ever using a term that wasn't actually there on a map, or in documents, we probably would never have succeeded in, in crushing the evil empire, and winning that."

Dear Baby Jesus, where should I start? First of all, let me defend Ronald Reagan (despite global warming, hell keeps freezing over!): He did not mean the Soviet Union was literally an "evil empire" you could find on a map. It was his opinion, a turn of phrase, and well within the bounds of political rhetoric; there were many evil things about the way Soviet leaders treated dissidents, Jews, minorities, anyone who dared to differ from their dreary party line. So Palin's wrong in the way she depicts Reagan's "evil empire" argument.

Of course she's also wrong about the way the political world greeted that argument. Reagan was, in fact, widely "criticized" and "condemned" and probably even mocked for using the term; many people felt it wasn't the best way to keep peace with the Soviet Union and win them over to our side -- especially since there was a lot of evidence the Communist giant was crumbling even before Reagan's rhetorical assault (at least partly because of its Afghanistan folly; Palin's advisors might want to mention that to her!). Sunny Ronald Reagan shrugged off such criticism; Sarah Palin laps up the bile and turns into a victim and of course a self-described "pit bull," albeit with lovely lip gloss.

Whatever! Palin's book tour will be a political success; her book will sell and make her the money she brags she's never had. And Palin may well be the 2012 GOP nominee. But as she cozies up to Glenn Beck and mangles even her own party's history, it's increasingly clear she will never be our president. But trust me: She and her know-little followers will cause trouble for President Obama and the Democrats for the foreseeable future.

Here's a great video of MSNBC's Norah O'Donnell trying to ask Palin supporters in Grand Rapids, Mich., on Wednesday what she believes in. They get her position on TARP wrong (she supported it) and two of them just lapse into paranoid right-wing ranting about how she'll defend the Constitution. Nice to see O'Donnell asking real questions; scary to see how they're answered: