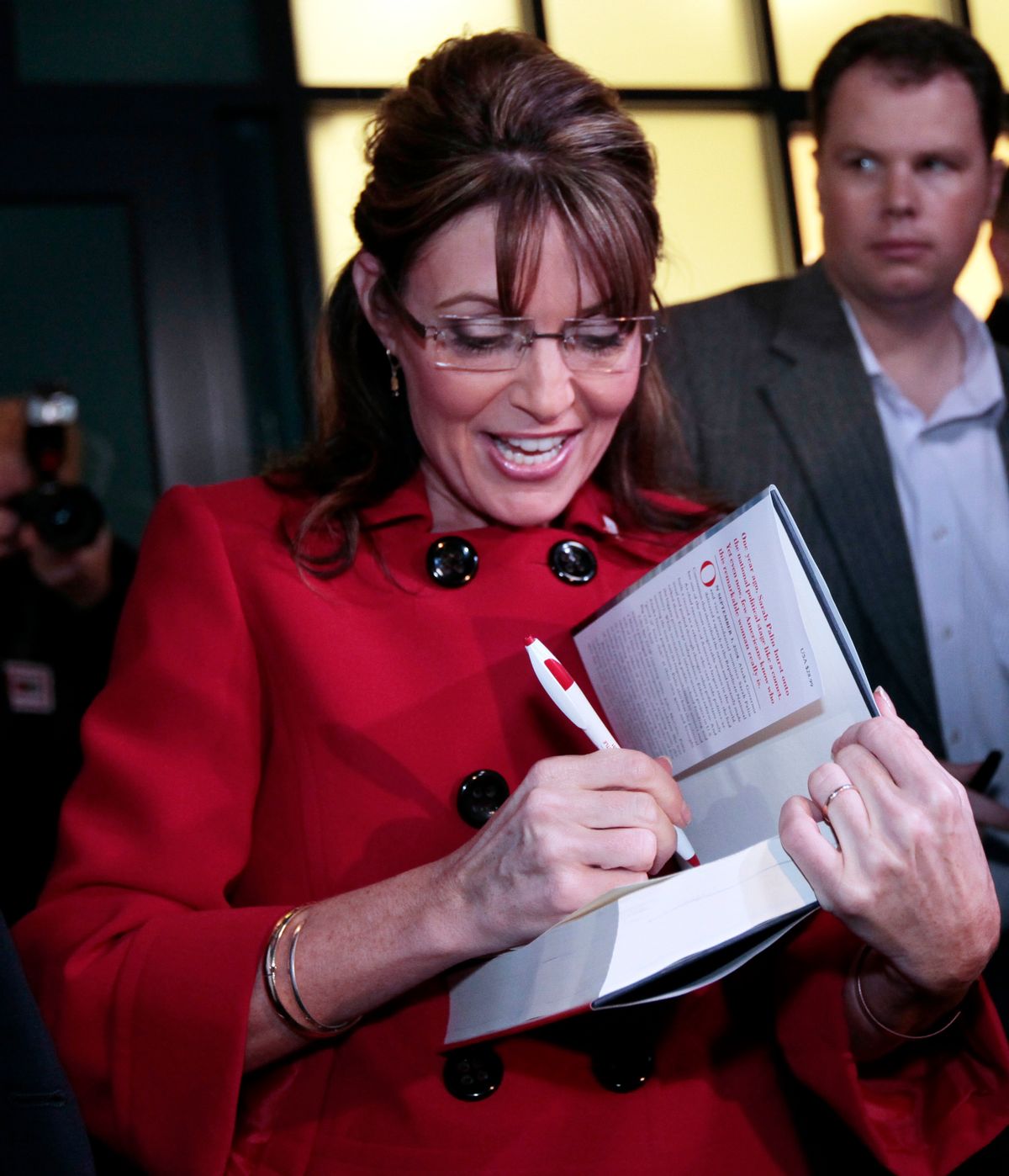 Sarah Palin fans began gathering late Monday night for a book signing that wouldn't begin until 6 o'clock Tuesday evening. The signing fell during Michigan's two most sacred weeks -- firearm deer season. So Ken Bellhorn left his hunting camp at 1 a.m., and showed up at the Barnes & Noble in Woodland Mall still dressed in an orange camo jacket, a John Deere T-shirt, and hunting boots. He got there early enough to claim one of the 940 wristbands that guaranteed him an autographed copy.

"I already shot a small buck, but this'll be a bigger trophy," said Bellhorn, who was laid off last year from his job at a plastics firm that supplies the auto industry, and has spent some of his free time attending tea party rallies. "I think when Reagan was in office, he saved us from ourselves, and I think she's got the character and the morals to do the same thing."

Sarah Palin seemed to have an affinity with Greater Grand Rapids that she may not find anywhere else on her 31-city tour. West Michigan fits both sides of the Palin persona -- the antiabortion creationist and the moose-skinning hockey mom. It's a northern exclave of the Bible Belt, with one of the highest churchgoing rates in the nation. But unlike the rest of the Bible Belt, it's a place of deep snowfalls, ice rinks and bars with more Ski-Doos than pickups parked outside on a January night.

(In "Going Rogue," Palin thanks a Grand Rapids family for hosting her son Track during a hockey tournament.)

"There's a bond of northern women," said Jacquelyn Krug, a mother of five from Battle Creek. "She knows how to hack a winter."

Krug was waiting outside the store when the Going Rogue Express -- an enormous blue bus with a photo of Palin standing in front of a mountain landscape -- began circling the parking lot, to chants of "Sarah! Sarah!"

Palin stepped out, holding her infant son, Trig. She stepped onto a stage surrounded by red velvet ropes, then handed the baby off to an aide.

"Thank you so much for showin' up!" she crooned. "First stop on the tour. There's just somethin' about Michigan. I couldn't wait to get back to Michigan. Alaska and Michigan have so much in common, with the huntin' and the fishin' and the hockey moms and just the hardworking patriotic Americans who are here. This is the heart of industry in our country, and I would like to see for this heart of industry for you all to just see a revitalization of your economy, and to be able to see really some remarkable things happen in this part of our land, and I anticipate that good things are going to happen here."

"Tell the truth, Andrea Mitchell!" someone else cried -- a challenge to the NBC reporter who was broadcasting from the store.

After Palin went inside, people took turns posing for photos next to the bus, as though it were Mount Rushmore on wheels. Tomas Ojeda, a former Marine from Grand Rapids, held an American flag and a copy of "Going Rogue." He opened the cover of his book to show off a pencil sketch of a pit bull, drawn by his daughter.

"I yelled, ‘Get your pit bull on' when I saw her," he explained.

In her short speech, Palin had promised that buyers of "Going Rogue" could "read my own words -- unfiltered." If there were two common sentiments in the thousand-person line inside the mall, they were: resentment of the news media for its unfair treatment of Palin, and eagerness to use the news media to air that resentment.

Doug Till of Kalamazoo was wearing a T-shirt that identified him as a member of the Southwest Michigan Tea Party Patriots. I told him I was from Salon.

"The enemy!" he said jovially. Then he talked to me for 10 minutes, breaking off only to run to the other side of the rope line and engage a reporter for an Alaska newspaper.

Till was glad to see Palin in Michigan, a state that had been "abandoned" by the Republican establishment. And he was glad the national cable channels had followed her here.

"I wonder if MSNBC and CNN will listen to us now," he said.

Palin sat in front of a blue screen on the second floor, scrawling "Sarah" in book after book, while country music blasted from a speaker. (The "Going Rogue" soundtrack: "Independence Day," by Martina McBride; "These Are My People," by Rodney Atkins; "How Do You Like Me Now?" by Toby Keith; and, natch, "Shuttin' Detroit Down," by John Rich.)

Jacquelyn Krug's daughter, Annalisa, got into line without a wristband, because she was wearing her Air Force ROTC uniform.

"It's such an honor to hear you say that, and that you've committed to serving our country," Palin replied, sounding both pleased and taken aback.

Randy Cotton of Kentwood walked down the escalator carrying two copies of "Going Rogue." The night before, he had attended a Mike Huckabee book signing at a store just down 28th Street. It was nothing like the Palinageddon that hit Barnes & Noble on Tuesday.

"This crowd was definitely by far bigger in size," Cotton said. "I spoke to people yesterday who didn't know Huckabee was going to be there until they came in to buy the book."

The last time Grand Rapids saw a line this long, it was for another Republican, though not one Palin has to worry about facing in 2012. When Gerald Ford's casket was brought home, Grand Rapidians waited five hours in the cold to pay their respects. (Ford is buried at his museum, a pretty colorful memorial to a pretty colorless guy, with a Pet Rock, a glitter ball, and other mementos from the disco era that defined his presidency.) Ford belonged to a different Republican epoch: He was pro-choice, pro-ERA, and named Nelson Rockefeller his vice-president. He was the last representative of the moderate, Midwestern Republicanism that was upended by Ronald Reagan, in whose footsteps Palin is trying to follow.

Grand Rapids proper still enjoys the middle of the road. The city narrowly voted for Obama last year. But the surrounding region may be Palin country. West Michigan is, by far, the most conservative part of the state. It was settled by Dutch Calvinists, members of one of the country's most Republican ethnic groups. (Amsterdam may be so libertine because all the religious folks moved to Michigan.) A Republican has to do well in West Michigan to carry the state. But a Republican too closely identified with the area usually loses. Detroiters think West Michigan is sanctimonious. As a result, it has never produced a governor.

That, in a nutshell, is the problem Palin faces with America. On the back of the Going Rogue Express is a list of her book tour stops. Like Grand Rapids, most are medium-size cities in what Palin considers the "real America." She'll be signing books in Sioux Falls, S.D., Roanoke, Va., and Birmingham, Ala. She won't be signing books in New York, Chicago -- or Detroit. Those are capitals of the fake America. But the fake America elected Obama. The fake America has more votes than the real America, and it's turned off by candidates who cloak themselves in small-town values, while insisting those values are superior to big-city ways.

Palin puts on a terrific political show. Her book signings are worth the $28.99. Only Barack Obama inspires as much fervor among his followers. Except for a few nuts like a Yankee Bubba in the "Jesus Beat the Devil With an Ugly Stick" T-shirt, Palin's disciples are earnest and patriotic. But she'll likely stay a genre superstar, like the country musicians she plays at her rallies. She can sell libraries full of books that way, and she can even start a political movement, but she probably can't cross over to the White House.

Palin fan Doug Till hopes media doubters are wrong about that. He had two objectives for his encounter with Palin: He wanted to ask her to attend a fundraiser for his tea party organization. And he wanted to show her a framed photo of his 8-year-old granddaughter sitting astride a bear she had shot in the Upper Peninsula.

Spotting Till's tea party shirt, Palin said, "You're doing a great job. Keep it up." And though he wasn't allowed to bring the photo to the signing table, Palin had been told the story of Kailey's bear hunt.

"Oh, you're my hero," Palin said, shaking the girl's hand.

"You rock," Kailey responded. "I want to be just like you."