Could "New Moon" be a feminist triumph?

Forget the antiquated gender roles and the axed female director. This movie's box office could be a game changer 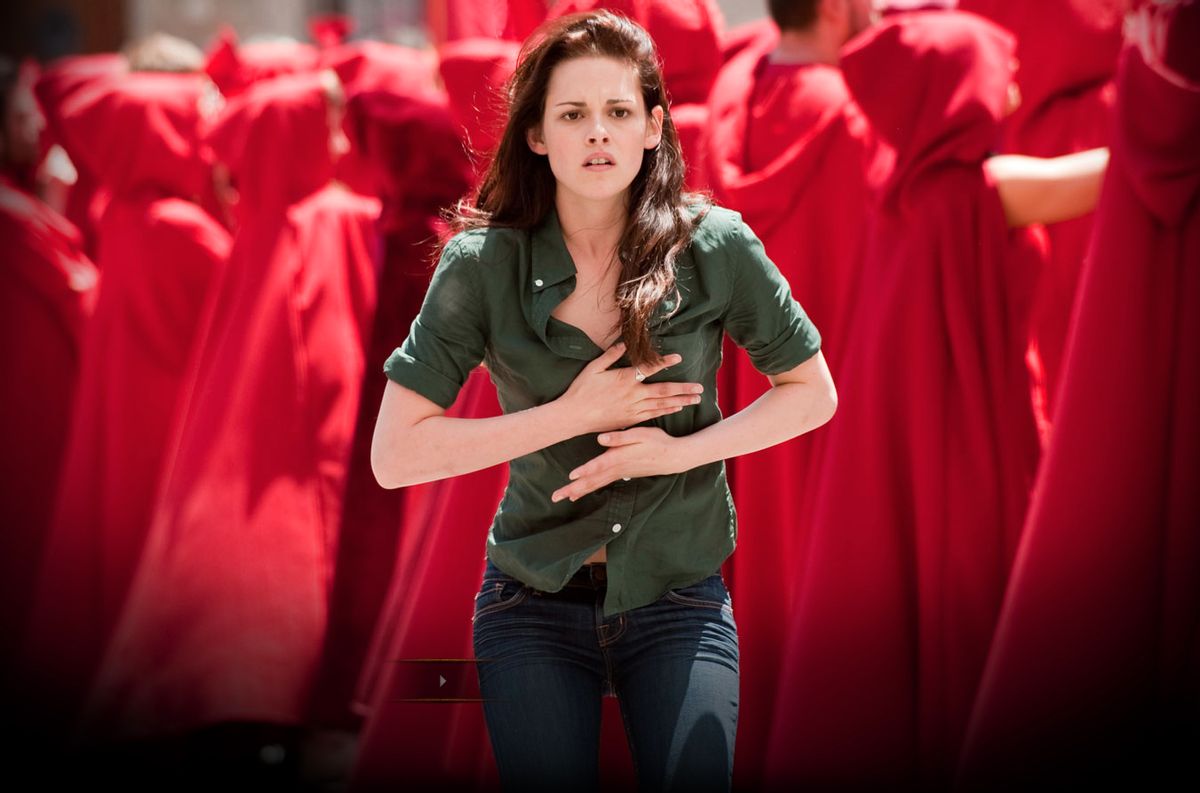 OMG, you guys, it's here! "New Moon" opens today! In fact, it started with midnight screenings last night, over a thousand of which sold out via just one service, Fandango, according to the L.A. Times. Entertainment Weekly reports that Fandango has also sold out thousands more showings of the film -- "the most the company has ever sold prior to a film's release date" -- and that "AMC and MovieTickets.com report the same information. Both the movie chain and the online ticket buying service have said the film has broken records set by "Harry Potter" and "Lord of the Rings." ("New Moon" even nabbed the No. 1 spot on MovieTickets.com's list of top 10 advance ticket sellers of all time, breaking a nearly 5-year-old record set by "Star Wars: Episode III: Revenge of the Sith.")

In fact, the advance sales have been so overwhelming that MovieTickets.com and Summit Entertainment, the studio behind the film, stopped reporting sales data earlier this week, for fear of losing customers who assume there's no point in even trying to get into a showing of "New Moon" this weekend. Says NYT ArtsBeat blog, "It could dent the opening-weekend gross if consumers mistakenly think that no tickets are available. At a certain point, average moviegoers might skip the multiplex altogether if they think 'Twilight' hoopla has grown too insane."

I hate to break it to nervous studio execs, but that ship has sailed. "Twilight" hoopla has been bonkers for years, and the "New Moon"-specific hoopla is really only noteworthy for being even more so. The L.A. Times article notes that "more than a week before its release, the film sold more than four times as many tickets as the original 'Twilight' at MovieTickets.com at the same point in the sales cycle." And it's not just teenage girls driving the frenzy; MovieTickets.com's latest data said 27 percent of the buyers were women between 25 and 34 -- the slightly embarrassed but no less addicted demographic Sarah Hepola reported on for Salon earlier this week.

Another 35 percent are women under 25, though, and altogether, 87 percent of advance ticket holders are female. That's no surprise, but a majority-female audience breaking sales records left and right certainly is. "Let's just think about that," wrote Melissa Silverstein at her blog Women & Hollywood last week. "A franchise fueled by girls and women has the potential of beating the machines for the box office record. This movie could potentially be 'guy proof' meaning they won't need guys to see it for it to kick some box office butt. Whereas the other franchises NEED women to make their numbers."

Having seen the first movie and read the first two books before officially determining that neither the lols nor the thought of blogging furiously about the wildly popular series' gender messages held my interest enough to continue, I never imagined I'd find a reason to see the "Twilight" phenomenon as a potential triumph for women. In the books, at least -- far more than in the first movie -- heroine Bella is spineless and infantilized, while dreamboat vamp Edward is stalky and emotionally abusive. The thought of the effect those characterizations might have on young girls who see it as a depiction of "true love" pained me. But Silverstein makes a great point: What about the effect the "Twilight" saga's success might have on Hollywood's confidence in female-oriented films?

"New Moon finally give us an apple to apples comparison with other types of fan-driven films," she told me in an e-mail. "The biggest films in Hollywood are the ones that come out of comic books, toys and books. Starting last year with 'Sex and the City,' 'Mamma Mia' (and both those can be dismissed because the targeted audience was older), but now with the two 'Twilight' films, it shows that female filmgoers can be as rabid in their fandom as male." The question is, will the powers that be recognize young women as a robust market that's been largely ignored and condescended to, or will they write it off as a limited phenomenon? "Studios should look at this as a golden opportunity and not a fluke!" writes Silverstein. But tapping into the passions of young female audiences means "working to try and uncover things that are bubbling in fandom and even trying to come up with exciting ideas to engage the audience," not just waiting around for the next runaway bestseller.

It might also mean sticking with what works, especially when it's a female director who's demonstrated a knack for understanding teenage girls. Unfortunately, Catherine Hardwicke, director of "Twilight," was replaced by Chris Weitz for the second installment, despite the first film's having grossed $383.6 million worldwide -- and the series seems to have suffered for it artistically, if not financially. Salon's Stephanie Zacharek enjoyed Hardwicke's movie as an "unapologetic, unembarrassed foray into teen-heartthrob territory, hitting the sweet spot where pop culture, teenage curiosity about sex, and vampire lore meet," but says Weitz's "offers few of the juicy, go-for-broke romantic pleasures of its predecessor."

Zacharek's not alone in her disappointment. Granted, popular teen-oriented franchises hardly need critical acclaim to succeed, and the first film only earned 49 percent positive reviews at Rotten Tomatoes -- but contrast that with the 30 percent rating "New Moon" has. Positive word of mouth may be no more than the icing on the cake for such a big movie, but it's nevertheless likely to be absent this time, even though Weitz had far more money and momentum going into the project. Says Silverstein, who saw an advance screening, "I think they really miscalculated in not keeping Hardwicke. The budget for this film was $50 million up from I believe $39 for the first one and one of the things that the studio and Hardwicke were fighting about was budget. She really seems to know how to tap into the teen spirit and that was missed here. She just knows how to elicit emotions from young people. It's her thing, and that's what worked best in the first movie and worst in this movie."

So even if the studios do learn something about the power of female audiences from the "Twilight" saga, they seem to have ignored any lessons the first film offered about the capabilities of a female director. Nevertheless, Silverstein is optimistic about "New Moon's" potential to improve women's lot in Hollywood across the board -- as long as executives recognize its tremendous appeal as more than a fluke. "Hopefully, this success will infiltrate the minds of Hollywood number crunchers and seek out products for the female audience," she says. "If people start thinking and making more movies that star women and are women driven, it can only help women at all levels of the business."