It might break box-office records, but this "Twilight" follow-up is a total bust 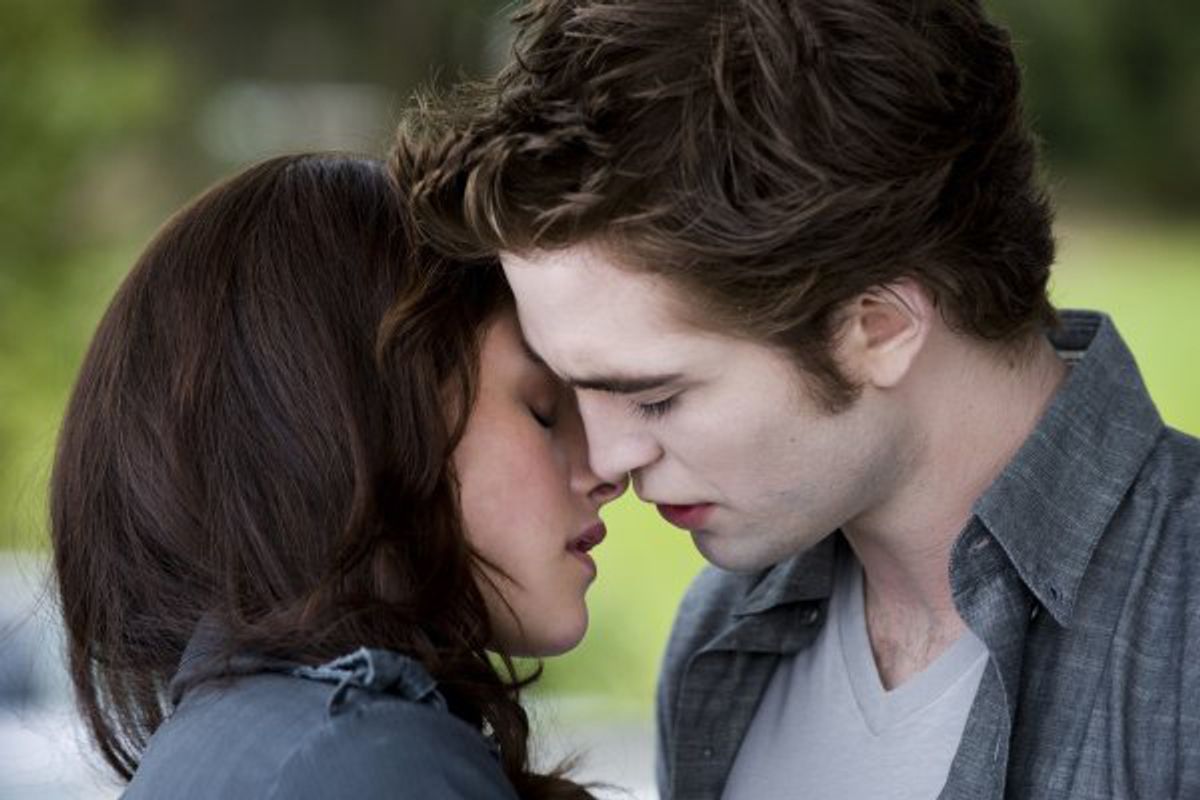 The excitement level for "The Twilight Saga: New Moon" is so high that it's a shame each ticket can't come with its own miniature fainting couch. Moms, grandmoms, gay men, lesbians, working women in their early- to mid-20s and even preteen-to-teenage girls (the latter ostensibly being the original target audience for this material) have long been gearing up for the second movie in the "Twilight" series, based on the explosively popular young adult novels by Stephenie Meyer. Plenty of people like a good swoon at the movies -- it's a pleasure contemporary pictures all too seldom offer us -- so it's no wonder hopes for "New Moon" are high. The first picture in the series, "Twilight," directed by Catherine Hardwicke, was an unapologetic, unembarrassed foray into teen-heartthrob territory, hitting the sweet spot where pop culture, teenage curiosity about sex, and vampire lore meet. Anyone who enjoyed the first "Twilight," as I did, would naturally expect more of the same from "New Moon."

But there's a cloud over this "New Moon," and it's a big one. Hardwicke (who'd previously made the overwrought cautionary teen drama "Thirteen") was originally signed on to direct this installment; she was fired early on and replaced by Chris Weitz, a director with a varied list of credits, "About a Boy" and "The Golden Compass" among them -- he also co-directed "American Pie" with his brother, Paul Weitz. (Melissa Rosenberg has written the screenplays for both pictures.) "New Moon" features the same cast as the first movie. And the "Twilight" books have proved so frighteningly popular to begin with that the studio, Summit Entertainment, probably figured it could resurrect Ed Wood from the grave and still get a hit. How much difference could switching directors make?

Although it's hard to answer that question definitively, "New Moon" offers few of the juicy, go-for-broke romantic pleasures of its predecessor, and the movie is so badly shaped that it's hard not to blame Weitz as a director. Kristen Stewart returns as Bella, the high-school student who's been smitten but not bitten: Her boyfriend and true love is 109-year-old Edward Cullen (Robert Pattinson), part of a wandering vampire family that has taken up residence in her Pacific Northwest town. Bella has just turned 18, and after some convoluted and confusing dribble-drabble about Bella's not being "good" for him, Edward decides to leave her in order to protect her -- whatever that means. Before vanishing, he warns her not to take unnecessary risks.

Depressed Bella responds by spending October, November and December staring, quite literally, out of her bedroom window. When she finally does go out, she imperils herself by getting onto a motorcycle with a local goon, and Edward's face appears before her, a shimmery vision, warning her of the danger. Seeing a window of opportunity here, she collects a bunch of old motorcycles and asks her friend, the sweet, caring, good-with-his-hands Native American Jacob Black (Taylor Lautner) to help her fix them up. Bella's motives aren't completely clear -- she seems to have a bit of the thrill seeker in her, anyway -- but the suggestion is that if she saddles a rebuilt two-wheeled death machine and rides it really fast, perhaps she'll get to see more of these smudges of Edward.

Jacob, of course, has a mad crush on Bella. And as the two of them tinker with their junkyard toys, Bella comes to realize she likes him too. The complication, as was pretty much revealed in the first movie, is that Jacob is soon to be part of a tribal werewolf pack -- except, when these guys aren't werewolves, they're running around the landscape in bare chests and cutoff pants, scowling and growling at one another and at everybody else. Jacob can't resist the clan of the shirtless -- it's in his blood -- and so he joins their grumpy number, in the process changing from a cheerful, caring, open-faced kid to a sullen, pissed-off J.D.

One with giant, rounded biceps and Hulk-style pecs, I might add. And that's just the beginning of the problems with "New Moon." Bella's eyes pop when she gets a load of that chest, and she gets to see a lot of it, as we do. Forget that wan Victorian valentine Edward -- the movie only wants to hammer on the notion that women feel conflicted between sensitive, skinny pale guys who'll protect them with their mad vampire skilz and brawny bruisers who'll protect them with muscle, either the wolf or the human kind.

In the "New Moon" world, there's no in between. These movies, and the books they're based on, are all about veiled sexuality, with all its thrills and threats: There's no sex in these pictures, only the vague, gauzy promise of it -- predicated on the way young girls often dream of being swept off their feet by a handsome, laconic hunk but don't want to think about what might come after.

But the problem isn't that "New Moon" takes an uncomplicated view of sex; it's that it doesn't even bother to take a romantic view of romance. Weitz appears to have paid no attention to pacing here: The movie is essentially a string of brooding speeches, often delivered in the woods, with very little interesting connective tissue in between. The dialogue consists of numerous variations on two lines, the first being "I love you, but I'm a vampire, and I can't protect you," the second, "I love you, but I'm a werewolf, and I can't protect you." The proceedings perk up a bit in the later scenes, set in a mysterious Vatican-type place in Italy: There, Michael Sheen holds court in silly priest's robes, and powerful vampire temptress Dakota Fanning shoots daggers, figuratively speaking, with her eyes. But she's also wearing a tight upswept hairdo that makes her look a little like Cloris Leachman in "Young Frankenstein," and where's the romance in that?

The performers struggle along in their silly hairdos and bad makeup. (It's possible that the pale vampire makeup here is even worse than in the first picture; Sheen, in particular, looks as if he's wearing a thin coat of Queen Helene Mint Julep Masque.) Pattinson really needs only one expression to play the tortured Edward -- he lowers his eyes and peers out from beneath fringey eyelashes -- and he's mastered it. He's completely serviceable in terms of what he needs to do here, which is basically to wander around, to borrow a line from Keats, alone and palely loitering. Stewart is much better than she needs to be for this material: Even in the most emotionally heightened scenes, she intuitively eases up on the clutch -- miraculously, nothing she does feels overdone or overthought. Lautner is cute as the eager, playful, pre-wolf pack Jacob and numbingly dull as the supposedly sexier wolfen one.

Some of the effects are perfectly adequate: When those hot-pants tribal hoodlums finally turn into wolves, they're magnificent beasties with sturdy, prancing paws. But mostly, Weitz seems to think he can get away with trotting out the "greatest hits" moments from the first movie: Showing Edward drift through the high school parking lot in slow motion, like a teenage god crossed with a pop star; fixing the camera on Bella and Edward as he stares into her eyes and murmurs one version or another of his patented tortured-vampire speech. "Twilight" was a pleasant surprise, a dish of cream-heavy teen romance that had at least been made with a guiding sensibility behind it. "New Moon," on the other hand, merely follows a dictated formula. It's a cheap, shoddy piece of work, one that banks on moviegoers' anticipation without even bothering to craft a satisfying experience for them. Its pandering is an insult. "New Moon" moons its audience, and makes them pay for the so-called privilege.