FX's biker drama makes heroes out of swaggering, hard-living thugs, but don't ride into the sunset with this bunch 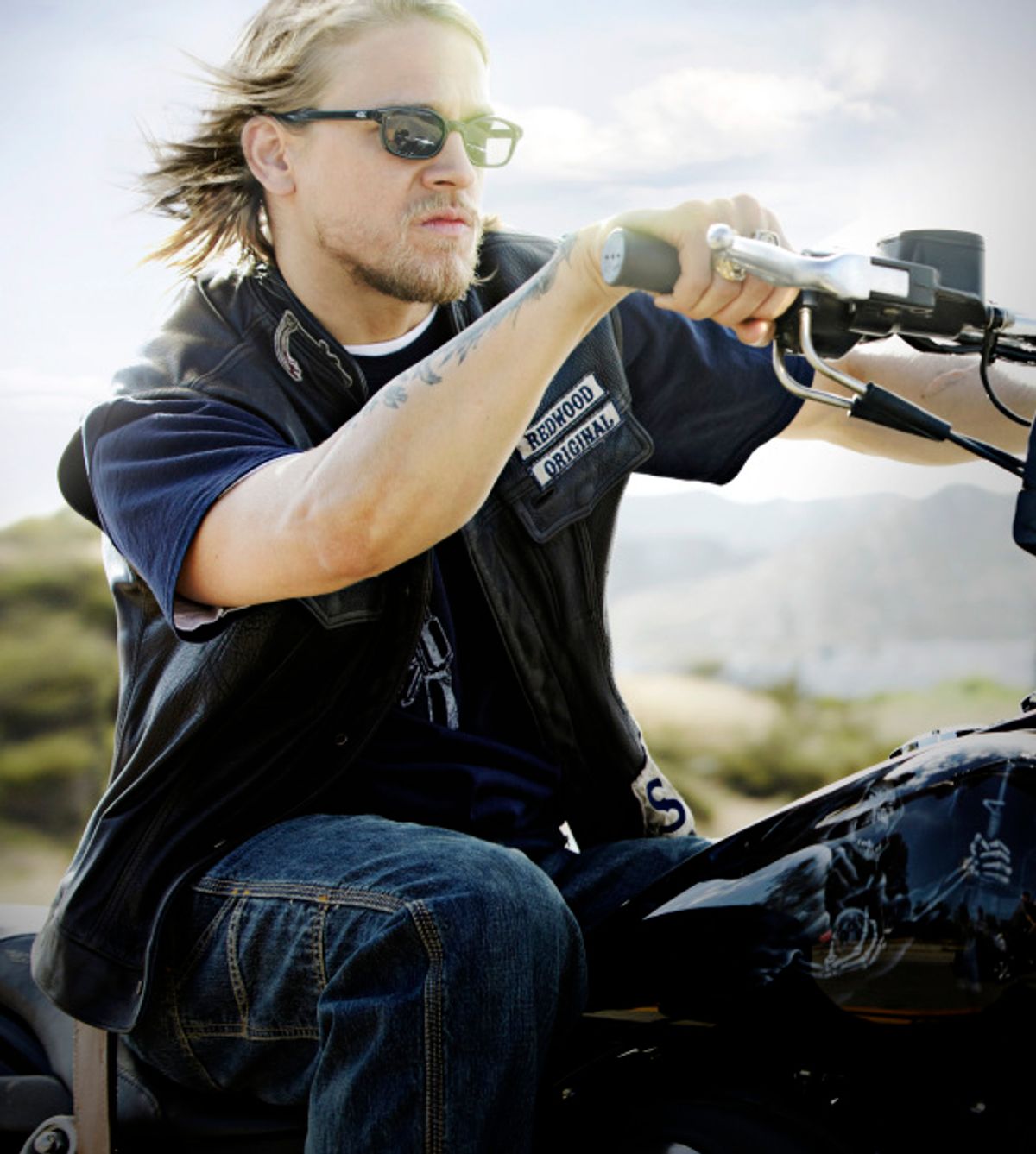 James Dean misled us. Rebellion without cause isn't sexy after all. In fact, in hindsight, it just looks like a bunch of impetuous foot-stomping, particularly to those of us who are too busy spot-cleaning stubborn laundry stains and paying our life insurance premiums to make a big show of going against the grain.

Yes, of course the governments of the world are a big joke, society is full of shit, rules are made for breaking, common wisdom is anything but wise, blah blah blah. You won't find any arguments from us there. But that doesn't mean we're going to run around setting shit on fire. Walking on the wild side, shunning conformity -- that kind of unfocused lashing out sounds so exhausting. Who has the kind of time and money it takes to exercise their free will anymore?

Maybe if we were loaded and had lots of handservants to keep us organized and vacuum our floors and watch our kids, then we could lounge about, chain-smoking and questioning authority and such. Surely filthy rich capitalists have the resources for extracurricular sticking-it-to-the-man types of activities. Yes, once we're landed gentry, then we can challenge the dominant paradigm at our leisure, just like Karl Marx and his tony surrealist friends!

In the meantime, though, we'll be scrubbing out these goddamn laundry stains, and we'll leave telling truth to power to the powerful.

Son of a gun

But you know what's even more chafing and tedious than causeless rebellion? The preening and posturing of self-proclaimed, causeless rebels. Unfocused irritation with the straight life is all well and good -- who doesn't quietly seethe at the water cooler of life, or cringe and claw at the scratchy fabric of the societal necktie? We all walk around, secretly hating each other for conforming to the rules and social cues of some odious "other" demographic, after all. We spy a gigantic SUV and lament the curse of magnetic cause ribbons and terrible Tex-Mex restaurants and water parks filled with obese children weaned on blue slushies. We glimpse a Birkenstock and grit our teeth to think of tedious free-range yuppies stocking up on overpriced backpacks with built-in espresso machines at REI, humming "Fire on the Mountain" while thumbing through sub-zero goose-down sleeping bags to take car camping in Joshua Tree.

We all quietly, secretly think of ourselves as rebels, while dismissing those around us as blind members of the herd. Our choices are independent and quirky, while theirs are clearly byproducts of some pathetic desire to fit in.

But to create a lifestyle around it? To loudly, actively proclaim yourself a rebel? To demonstrate your anti-everything status with such clichéd, conformist signifiers as a leather jacket, a Harley-Davidson motorcycle, a pointy goatee, and a penchant for chicks in cutoff jeans? That's just silly.

Maybe my allergic reaction to self-styled, flag-waving rebellion is what keeps me from wholeheartedly embracing FX's "Sons of Anarchy" (10 p.m. Tuesdays). Maybe, having grown up in the South, I associate biker gang stylings with the sorts of kids who drove growly Trans Ams with rebel flags hanging from the rearview mirrors and kept baseball bats in the back seat in case of trouble. It's hard to be romantic about a subculture that, for me, calls to mind the red mud of man-made lakes, filled to the brim with big, hollering, hairy men in Day-Glo lime green swim trunks, tossing back cans of Bud while roaring around on their jet skis.

But in its second season, "Sons of Anarchy" has amassed solid ratings, a vocal fan base, and a growing heap of critical acclaim. This success comes in part from the fact that show creator Kurt Sutter has slowly but surely managed to bring some of his experience from "The Shield" into play, presenting a few more warring factions this season -- the Mayans (Mexican bikers), the League of American Nationalists (white supremacists), the local cops (sometimes corrupt, sometimes not), the Feds (always sneaky and remorseless), the IRA (ruthless but idealistic in their own ways) -- and creating slightly more dramatic stories from the whole mix.

But more often than not, the showdowns on "Sons of Anarchy" amount to a simple shoving match: One faction does something bad, their enemies do something worse, the first group is forced to raise the stakes, etc. The running question -- "How are we going to address this latest insult or attack?" -- is revisited over and over again. Wizened bikers stroke their gray goatees. Hellboy paces and growls (that's Clay Morrow, the big boss of SOA, played by Ron Perlman). Hellboy's blond stepson, Jax (Charlie Hunnam), winces and questions his authority-questioning paternal figure, then retreats to the roof to read his dead father's manifesto about turning the SOA away from their gun peddling and violence, toward their original focus, something vague about living wild and free and not paying your parking tickets in a timely fashion.

But as Jax sulks and sweats the small stuff, looking like Little Lord Fauntleroy among the grizzly, scarred faces at the SOA clubhouse, what's going on in his pretty head? It's tough to say. What does Hellboy have on his mind? No telling, really. Even Tara (Maggie Siff), Jax's pretty doctor girlfriend, has lately fallen in line with the gun-toting rebel lifestyle without many protests or complaints, even when her string-pulling on behalf of her rebel associates looks like it might get her fired. Sure, we're supposed to understand that when Jax murdered her stalker ex (Jay Karnes), he made her his lady. Yes, we should recognize that, when Tara helped Gemma (Katey Sagal) in the wake of her brutal rape at the hands of kingpin Ethan Zobelle (Adam Arkin) and the white supremacists, the two became bonded in their shared secret (and shared victimization). Even so, thoughtful, multidimensional character explorations aren't really in the cards here.

Which would be fine -- "The Shield" and "The Sopranos" had plenty of characters who were simply self-interested thugs, after all. But let's face it, the gun business really isn't as interesting as the New Jersey mob or as riveting as corrupt factions in the Farmington police department. The rival gangs on "Sons of Anarchy" are too similar, seething thug characters are everywhere, and the strategies of each group aren't thoughtful or unexpected enough to hold our interest. On "The Shield," even when Vic Mackey backed himself into a mess of conflicting entanglements, at the end of almost every episode he was holding a trump card. I don't know how the writers pulled that off, but it made the show consistently satisfying. On "Sons of Anarchy" no one seems to have an ace in the hole, ever. Jax clashes with Clay, the Feds want Zobelle but Clay and Jax won't play, SOA member Chibs gives in to Agent Stahl when his IRA boss taunts him about sleeping with his daughter, but it doesn't add up or surprise us enough.

That said, the last two episodes have shown a little more promise in terms of unpredictability. After weeks of push and pull between Feds and cops and Mayans and white supremacists and Zobelle, we finally get into a powder keg situation: Seeing that her son Jax is about to go nomad (or leave the SOA behind and strike out on his own), Gemma (Katie Sagal) reveals to her husband, Clay, and to Jax that she was raped by the white supremacists. Hellboy and Lord Fauntleroy wince, shake their heads, engage in a manly show of solidarity. It's a good scene, really -- these actors are fantastic -- but the subtextual insult of Despoiling Our Bitches is a little creepy. Gemma doesn't help matters much by spelling it all out for us later.

Gemma: Clay's never gonna want to be inside something that's been ripped up like me.

Gemma: Love don't mean shit. Men need to own their pussy. His has been violated. He'll find another. That's what they do.

By the end of the episode, of course, Clay demonstrates that he's still enthusiastic about Gemma's recyclables, but I haven't moved on so easily: The line "Men need to own their pussy" rings through my head like a really bad Allman Brothers song.

But then, I'm guessing that your own personal love or hate for "Sons of Anarchy" will be about as objective as your love or hate for the Allman Brothers. That's just the kind of show this is: thugs, machismo and men who need to own their pussy, in the hands of good writers and talented actors. You watch, you cheer, you cry, you cringe.

On the other hand, "Sons of Anarchy" is one of the only reasonably entertaining dramas on TV right now that isn't about cops, lawyers or hospitals, a fact that makes the current groundswell of enthusiasm for this story a little more understandable. I only hope that Jax and the club have some clever tricks up their sleeves in the last two episodes. How will they take down Zobelle, and will they manage to get a little revenge on nasty Agent Stahl while they're at it? Will Chibs knock his nemesis Jimmy O for a loop? Somehow I suspect that after the darkness plaguing SOA in its second season, there's going to be some bittersweet revenge in the mix in the season finale. I just hope it's more satisfying than a shoving match.

Fx I Like To Watch Sons Of Anarchy Television