We're "stroller Nazis." We're whiny "breeders." Why is there so much contempt for mothers these days? 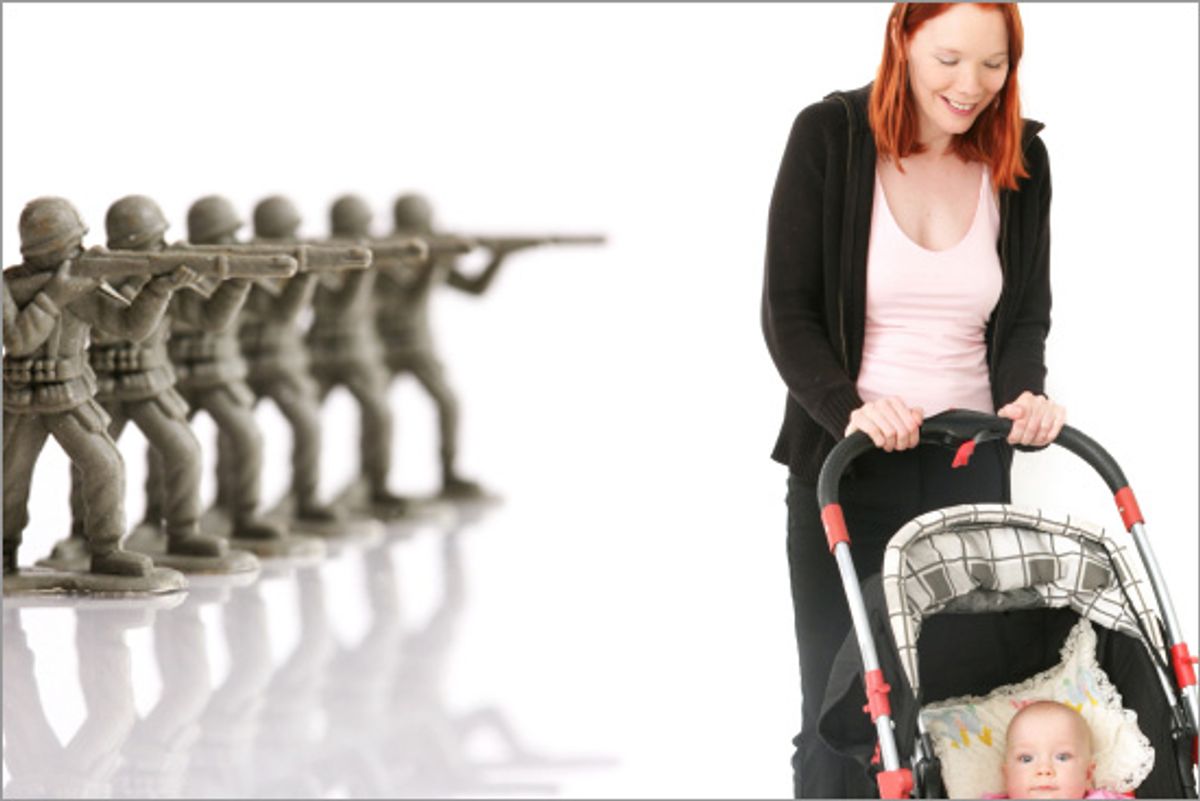 When I heard about Maclaren's recent recall of one kabillion strollers, I assumed Gawker.com was playing an elaborate prank on Brooklyn's Park Slope neighborhood. After all, the online snarkosphere has made urban blood sport of mocking the Slope's (exaggerated) reputation as New York's -- if not the planet's -- epicenter of über-coddled children with aggro-attachment parents plowing their pricey, bulky baby buggies along the sidewalks like tricked-out cattle prods.

Thing is, that derision is not only about Park Slope, and it's not only about strollers, which have somehow become synecdoche for the perceived ills of indulgent parenting everywhere. And it's not only about "parenting," either. No, I am telling you, it's about mothers. (White mothers, generally, and usually urban ones -- if in part because they're out and about on sidewalks and subways, not cloistered in carpools and playrooms.) You know them, or at least their epithets: "Stroller moms," the "stroller mafia," the particularly objectionable "stroller Nazis" -- and while we're at it, the "helicopter moms" and "sanctimommies." Along with the area blogs, the New York Times got in on the Maclaren fun with a silly shark-bait story on the allegedly "palpable sense of anxiety" the recall had wrought on the "hyper-conscientious" Slope. Standard online comment: "If the typical 'Slope Mummy' was not so hell-bent to get to her pilates classes, yoga classes, or whole foods market to pick up her 'fair trade, organic food items,' perhaps she would not be so careless as to fold 'Johnny's finger tips' into the hinge mechanism and amputate them."

Speaking of the Times, I wrote an article there a few months ago about how rarely, during both of my pregnancies, anyone offered me a seat on the subway. Among the (apparently record-setting number of) comments on the piece, many readers said they'd had the same experience and wondered, like me, what had happened to common courtesy. But the opposite camp? Vicious. Impressively, depressingly so. Mostly some version of this: "I am sick and tired of young mothers' sense of entitlement. It was your choice to get pregnant. Deal with it. You do not get a pat on the back or a seat from me because you decided to reproduce." The level of anti-breeder contempt ran so strikingly high that a third group of commenters emerged to say, "Wow. I hope people were nicer to your mothers." ("Who," they pointed out, also "bred.")

Maybe people were nicer to our moms, maybe people weren't. In one way or another, our culture has always been weird about mothers. Love/hate, Jocasta/Joan Crawford, supermom/"evil" stepmom, you name it. But right now, in some circles, it seems we're leaning toward hate. Yes, even when you control for the anonymous online jerkwad factor. And yes, even -- perhaps especially? -- as more and more blogs, books, sitcoms and movies, successful or not, explore with unprecedented candor the experience of being a (white, middle-class) mother.

"There's a lot of judgment and opinion about motherhood. Whichever way you choose to do it there's someone there to criticize you," Uma Thurman said when we talked about her role as a harried mom in the recent film "Motherhood," which got some crappy reviews and disappeared quicker than Veggie Booty in a snack cup. Were viewers not interested in movies about motherhood, or was it this movie about motherhood? No way to say for sure; maybe some of both? (One online comment, reacting only to the movie’s poster: "Ugh, I'll never jerk off to Uma again.") Time's review put it like this: "If [writer-director Katherine Dieckmann] would just edit out the few soft touches designed to make us like [Thurman's character] -- like her kind attentions to an elderly neighbor -- 'Motherhood' would play like a flat-out parody of the entitled, self-involved mother, fretting more than she copes and blogging more than she mothers. Isn't that a character ripe for mocking?" I'm gonna say overripe.

There's also a distaste for and discomfort with mothers doing mothery things -- especially in public -- that goes beyond blog post or parody. Facebook has yet to change its policy against photos of women breast-feeding. The Federal Trade Commission -- stay with me on this one -- has long required print and television to distinguish between paid and editorial content; last fall, the rules were updated to include blogs. All blogs; the FTC singles out no one. But many media outlets reported, misleadingly or outright wrongly, that the government was "cracking down" on "mommy bloggers" who write nice things about products without making clear they got them free from the marketing department of Adorable Items Inc. Mothers who blog were steamed, and not just because most hate being lumped together under the catch-all, pat-on-the-head term "mommy bloggers," but also because some tech bloggers, say, have been getting free shit for years. Parenting blogs do offer a growing and lucrative new-media market, but still: Why single out mothers as the sneaky, grabby ones?

Amy Sohn, author of Park Slope's own sex satire, "Prospect Park West" -- now in development at HBO -- says that the Q&A portions of her readings often turn into referendums on mothers themselves. "People will ask, 'Why do you take up so much room on the sidewalks?'" she says. "There's a staggering level of repressed -- or not! -- resentment against mothers."

To be sure, many aspects of the current mother-related culture are begging for backlash. (Or at least caricature, which is Sohn's department.) Over the last several years, we've pawed over "pregnancy porn," fawned over dewy celebrity moms, as long as they lost their weight fast enough, and fallen for shameless rackets like Baby Einstein. We've seen the standards of "good" motherhood go through the roof, and "mothers and motherhood [come] under unprecedented media surveillance," as Susan J. Douglas and Meredith W. Michaels wrote in their 2004 book, "The Mommy Myth: The Idealization of Motherhood and How It Has Undermined All Women." As a culture, we've arrived maybe at thin-lipped acceptance, if that, of people's choice to be childless, nodding politely as we wonder "what's wrong" or worry they won't see the light before it's too late. "Parenting" has become a verb, not to mention a market, peopled with the fabled "older," high-achieving mothers who appoint themselves chief operating officers of their kids' childhood. Or the opposite: who don't "control" their kids enough.

They're usually unfairly stereotyped, but sometimes they're also in our restaurants. I mean, I get it. I remember silently, uncharitably judging the absent mother (yes, I assumed mother) of the feral gender-vague child roaming Park Slope's Tea Lounge (the place Sohn calls the "Teat Lounge") who grabbed my then-baby daughter's toy out of her hand.

"Hey, you can't just take stuff from people," I chided.

He/she fixed me with a steely toddler gaze. "Why?"

Oh, God. Just last week, at the playground, I saw a mother beaming at her son on the slide. Every time he went down, she said, "Thank you, Cooper!" No lie. So really, I get that everyone's cranky and tired and laid-off and just wants to keep walking -- or, depending, keep sitting. I get that people may have had supremely annoying encounters with "entitled" mothers making obnoxious demands and "SUV-size" strollers parked next to barstools. Even my most respected, most feminist, most ready-to-leap-to-the-defense-of-women friends and associates have such stories of their own.

But I still say that when it comes to mother bashing, there's more going on. Something deeper, more venomous, even more timeless. The level of vitriol is so high, its target so clear and consistent. "What's very telling is that we are not cursing the husbands who are presumably working all these hours so that they can afford a really nice stroller," notes former Washington Post columnist and "Mommy Wars" editor Leslie Morgan Steiner, who has written extensively about motherhood. "We are cursing the mothers."

Why? Well, as Steiner implies, class resentment surely plays a role, especially in New York. The assumption that any stroller is a symbol of wealth is sort of ridiculous, given that a new Maclaren Volo can run you $95 -- not  cheap cheap, but hardly super-deluxe, and working out to about  7 cents a day -- and half the ones you see around are hand-me-downs from other families anyway. But in New York, where wealth and status are defined by how many square feet you command -- and which used to be a place regular people could afford -- the simple act of pushing a stroller down a gentrified street apparently seems to say "I own this block" in more ways than one. (Or "I can afford one more bedroom than you can," and etc.) And if it's pushed by a mother during business hours, so much the worse: Her husband, we may (though not safely) assume, makes so goddamn much money she doesn't "have" to work. Right or wrong, especially in a recession, that part of the ill will makes some sense.

But I think there's another toxic subcurrent under the stroller vitriol, the subway dudgeon and the like. "It's all about the space we take up, the public space," says Sohn. "Why is that the metaphor that keeps coming up?" Why indeed? Women -- still -- are not "supposed" to take up space. Mothers, in particular. We are -- still -- supposed to remain in the background, doing whatever it is mothers do, smiling. We grow a belly, we need a seat, we say "excuse me, please," we speak up (or, God forbid, blog), and we've crossed the line, said or asked too much, become "entitled."

"The experience of motherhood is seen as invisible content," says Katherine Dieckmann, who tried to make it visible in the opening montage of her film, in which the Thurman character careens around doing a thousand get-everyone-ready-for-the-day things in the space of time it takes her well-meaning husband to make toast. "That is still the order of things -- and that's what I want to question."

So yes, some people are obnoxious, and some of those people are mothers. Yes, some strollers look massive, and some of them stand between you and your French Roast -- or you and that brownstone you can no longer afford. Maybe sometimes, though, what's seen as "entitlement" is just someone trying, in a given or perhaps even weakened moment, to get what she needs. I mean, it can't be a bad thing that our culture no longer embraces the Betty Draper "Go Upstairs" school of parenting. And women and mothers, working or not, continue to bear the brunt of domestic responsibility, and as much as the magazines make motherhood look pretty, and it often is awesome, it's also fucking hard, and we're tired, and we get slammed both for working and for not working, for paying both too much and too little attention to our children. And for all the relentless, glaring focus on individual mothers and their "choices," someone -- just ask MomsRising -- forgot to figure out a way to give our families paid leave and affordable health and child care, to which yes, mothers in the United States should be entitled. We're not saying we deserve a seat more than you do. But we would like to raise our children in a culture that is more generous to everyone.