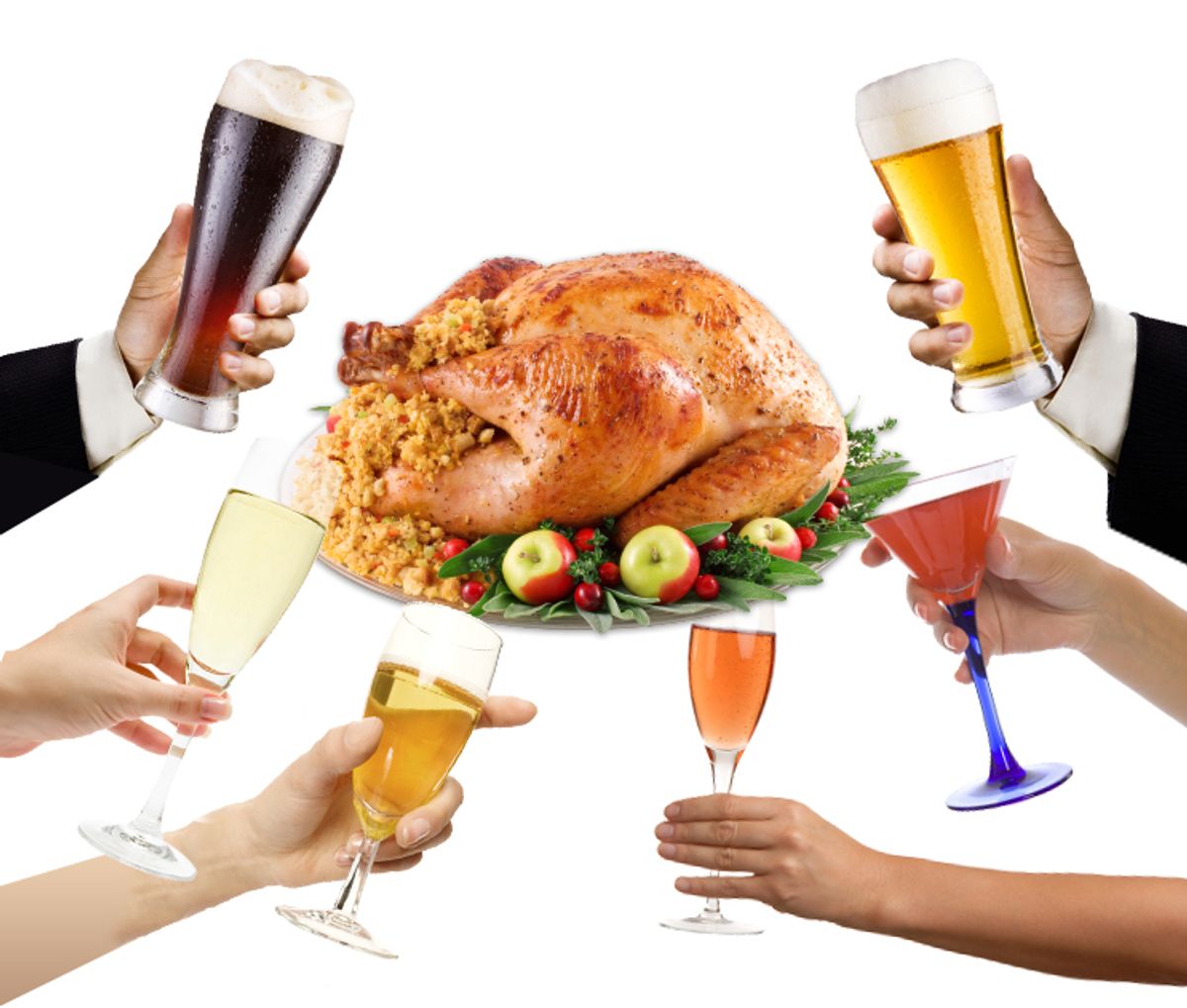 While traditional thinkers suggest a nice bottle of wine to go along with your turkey and mashed potatoes, we see no reason to limit yourself -- why not give thanks by trying something unexpected this year?

We asked some of our favorite food and drinks experts -- and the members of Salon's new Kitchen Cabinet -- for their most untraditional Thanksgiving drink suggestions. They came up with a deliciously eccentric list that ranges from cocktails to champagne to a delicious apple cider. We hope you'll give one (or two, or maybe four) a try.

Chef-owner of Alinea in Chicago

My first thought is a rosé champagne cocktail with cranberry juice, sloe gin and grapefruit. This pleases everyone while providing a seasonal yet wide-ranging profile to fit within the boundaries of the meal. The wine drinkers can skip the additives and go for straight champagne, and being a rosé, it will work with the turkey and the meatier gravy. The more adventurous will enjoy the cocktail and appreciate its complexity, and the drinkers will hit their glass hard with the gin for that extra kick.

METHOD:
1. Combine ingredients in cocktail base and chill well.

Might be the simplest recipe I have ever written.

I hate your Thanksgiving. I'm Canadian and you guys celebrate it six weeks late. Plus, I don't eat turkey. But I do remember a time when I was dragged to a Thanksgiving dinner with a bunch of wannabe actors who suddenly and without warning joined hands and started getting all wet and soggy about all the wonderful things they were thankful for. Families! Babies! Good friends! What was I thankful for? A bottle of Wild Turkey that put me on the floor before they could get to me. So with that in mind, I recommend the Wild Thanksgiving cocktail: some Applejack, a splash of lime, a big pour of Wild Turkey and some cranberry juice served over ice.

I'll go with Eve's Cidery Autumn's Gold, from Ithaca, N.Y. -- in part because I am famously cheap, and it's $14. And lazy -- it's sold at the Union Square Greenmarket, where I have to go anyway to pick up food for the feast. But mostly because it's freaking delicious -- gently bubbly, just sweet enough to handle the sweeter sides and plenty dry enough for the turkey. And it's made out of some 20 different apple varieties, most of which have disappeared from the average American orchard, apples with names like Brown Snout and Kingston Black, apples I don't want to see disappear. And so, I drink them.

With a rum book coming out in April 2010, it's all about rum, ron and rhum. I'll inspire conviviality with "'ti punch" from Guadeloupe. Short for a petit punch, this is a classic mix from the French Caribbean. If you like a caipirinha, you'll love this French variation on the lime, rum and sugar theme. Here's the recipe (serves one):

1 lime cut into pieces
Sugar or simple syrup to taste (using unrefined cane sugar)
White rum from the French Antilles to taste (You may use any white rum, but the rum of the French Caribbean is made from sugar cane juice, not molasses, and has a sugar-caney flavor that is not duplicated in the whites from the rest of the region.)

Place the lime pieces into a small, wide-mouth stemmed glass. Add the sugar and pour in the rum. Stir until well mixed. Some will add an ice cube, but many consider this anathema.

Choose three or four Cru Beaujolais, such as Brouilly, Chiroubles, Fleurie and Saint-Amour. There are actually 10 Cru Beaujolais, but these four are among the lightest and the most charming. Moderate in alcohol, bursting with red fruits on the palate and the aromas of flowers and spices on the nose, the wines are made solely from the Gamay grape in the granite soils of Beaujolais, the southernmost part of Burgundy. Play mix 'n' match with these wines, and enjoy all of them; the cranberry sauce will never taste better while the turkey, stuffing ("dressing" to Southerners), and sweet potatoes will acquire a delightful sauce redolent of red currants. (Note: The word "Beaujolais" will probably not appear on the labels; the Crus are in a special category all their own.)

I've always been a fan of champagne with the Thanksgiving meal. Festive, but more important, light and crisp, a nice respite from the rich and dark flavors of traditional Thanksgiving foods. And the bubbles, or so I imagine, seem to aid in digestion.

This year I'm exploring a variation on the classic Kir as my libation of choice, substituting Pacific Rim Framboise for cassis. Not an eau de vie, but a dense and syrupy raspberry wine, Pacific Rim Framboise should add a sweet/tangy depth to the crisp sparkle of a good dry champagne, which will stand up to and complement the various and challenging flavors on the Turkey Day plate.

Root beer (in one of several guises) might be a fun and interesting way to kick off, accompany or cap the traditional Thanksgiving spread. Root beer's flavor profile definitely complements the whole "fall spice" thing and will work well if any of those traditional spices have been incorporated in the meal (nutmeg, clove or cinnamon) as they are traditionally, in dishes like sweet potatoes or pumpkin pie. It also adds a pronounced herbal note that might well bridge with the savory elements of the meal (especially thyme or rosemary)

It also makes sense historically. Colonial settlers were introduced to the precursor of root beer in the form of root tea, a strong alcoholic drink steeped with sassafras, sarsaparilla, the bark of wintergreen birch, and other herbs and spices. Native Americans used it as a medicinal remedy for all kinds of ailments; it isn't that hard to imagine a long-gone Thanksgiving celebration where root tea was the libation of choice, what with those harsh Northeastern winters, and all.

This year, I'm thinking of putting together a traditional punch made with the "lost" spirit, Batavia Arrack. It's a clear, rumlike distillation of cane sugar and red rice from Indonesia, popularized by Dutch traders in the 17th century. The punch -- as ubiquitous as cider in colonial days -- is lightly sweetened and scented with citrus and spice -- cardamom, nutmeg and coriander. It seems like a fitting drink to remember, and be thankful for, times past.

Ultimately, Thanksgiving is a bit of a beast to pair anything with. What goes with turkey, cranberries, pumpkin pie and potentially awkward social circumstances? I usually go with a sparkling red like Lambrusco and a Valium. The sparkling red will complement most anything somewhat well and the Valium will make you not care if it doesn't.