Creationism vs. atheism: It's on! 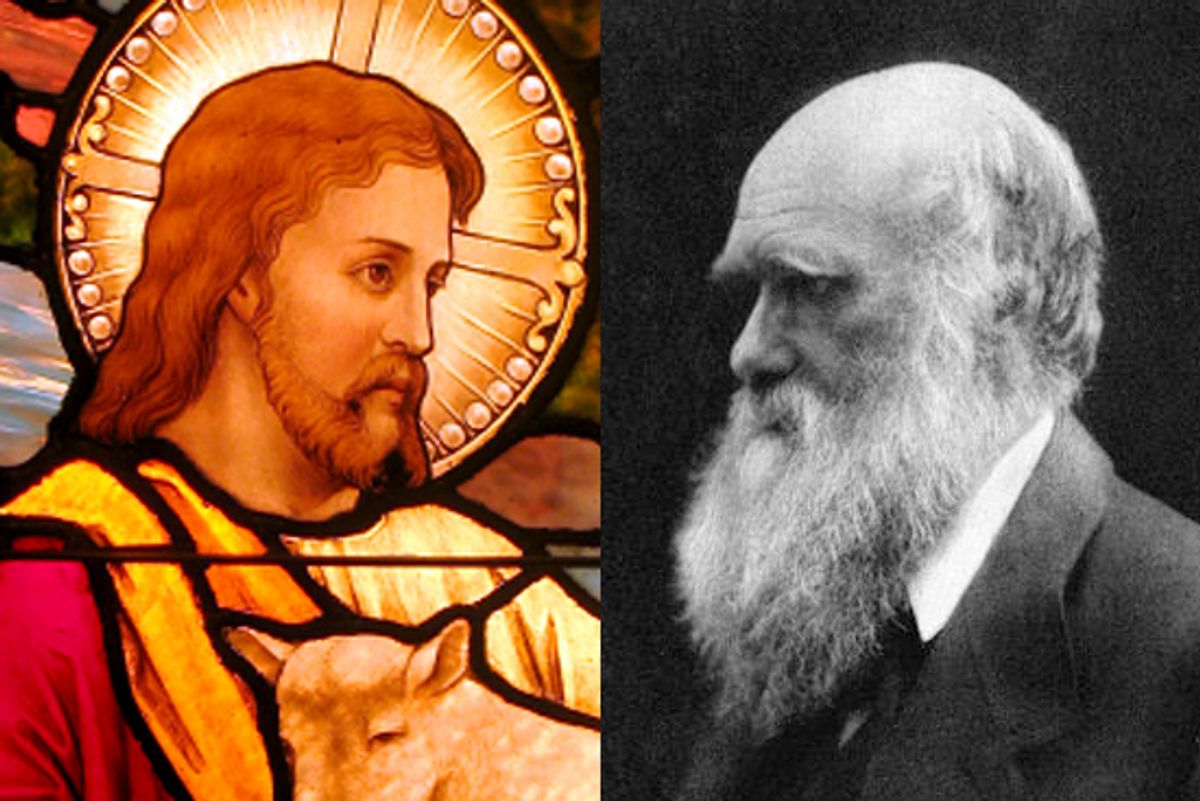 America's universities are supposed to be marketplaces of ideas, but last week they looked more like theaters of the absurd, as representatives of an evangelical group descended on an undetermined number of campuses to hand out free copies of Charles Darwin's "The Origin of Species." The catch: They used an edition of Darwin's seminal 1859 text that included an introduction by Ray Comfort, a minister who has made a specialty of arguing for creationism.

Was this stunt shrewd or moronic? From the first it's been hard to tell. The plan, innocuously named "Origin Into Schools," was announced this September in a video featuring Kirk Cameron, a former television child star who co-founded a ministry called Living Waters with Comfort. There's something almost pitiable about the way Cameron crows over the scheme; he truly seems to find it ingenious. He points out that the University of California at Berkeley cannot prevent the action because "their own Web site" dictates that "anyone is free to distribute noncommercial materials in any outdoor area of the campus." "Besides," he gleefully adds, "what are they really going to do? Ban 'The Origin of Species'? That would be big news! Especially when their own bookstore sells it for $29.99!"

But if the university has a policy permitting the distribution of any "noncommercial materials," why not just hand out straightforward religious tracts, without the risk of spreading evolutionary theory yourself? Cameron makes several false and misleading claims at the beginning of the video about how "our kids" aren't allowed to "pray in public" or to "freely open a Bible in school." (In fact, the first time I ever read the Old Testament was, yes, for a class at U.C. Berkeley.) Printing a tract as a foreword to "The Origin of Species" is supposed to be a clever end run around this sort of "censorship," but then Cameron himself indicates that the censorship isn't actually happening since it's against university rules.

As for Comfort's introduction, it says very little about "The Origin of Species" per se, limiting itself to familiar creationist canards about the complexity of the human eye and the absence of "transitional forms" from the fossil record. (It's hard to lend much credence to the scientific arguments of a guy who thinks chimpanzees are monkeys.) There's a brief biographical section on Darwin's life, most of which has been plagiarized from a short text by Dr. Stan Guffey, as some bloggers have demonstrated. The rest has been plagiarized from Brian Regal's introduction to the Barnes and Noble edition of "The Autobiography of Charles Darwin," except for a timeline, which was plagiarized from an online resource. Nearly half of the introduction isn't even about evolution at all, and consists of a hodgepodge of strained sky-diving metaphors and horror stories about pedophiliac killers.

Lastly, although Comfort claimed in advance that "not one jot or tittle" of the text of "The Origin of Species" would be missing from his edition, four entire chapters were omitted. Comfort said that this was an error limited to the first printing, but his critics have claimed that these sections were intentionally left out because they contain strong evidence for Darwin's theory.

Perhaps, but that presupposes that Comfort actually expects students to read the books his minions distributed. Any college professor can tell you how difficult it is to get students to do the assigned reading, let alone plow through a 19th-century scientific treatise that isn't even on the syllabus. Look just a little harder and you can tell that Origin Into Schools has nothing to do with books, reading, the intellectual formation of what Cameron calls "our future doctors, lawyers and politicians" or the free exchange of ideas.

The Living Waters Web site reveals Comfort to be obsessed with goading atheists, specifically Richard Dawkins, who is featured in almost as many of the site's videos as Comfort is and whom Comfort has challenged to a public debate. (Dawkins has refused on the grounds that Comfort is an "ignorant fool," but some negotiation appears to be ongoing.) Dawkins nicknamed him "Banana Man," after Comfort used the handy snacking features of the fruit to argue for intelligent design. Comfort recently sent Dawkins an anonymous "gift basket" containing his edition of "The Origin of Species" plus a banana, and said, with regard to the proposed debate, "I think I can smell English chicken."

Apart from the Cameron video, the main mention of Origin Into Schools on the Living Waters home page consists of an article titled "Origin of Species Campaign Enrages Atheists." The article announces that Comfort has stopped answering questions about the project because of an "angry backlash" and quotes with obvious relish opponents (including Dawkins) who recommend ripping Comfort's introduction out of the book, as well as a few who suggest burning it. The site invites comments, the majority of which come from critics, then cherry-picks the most inflammatory to illustrate how "filled with hatred" atheists are.

If the true intention of Origin Into Schools is to introduce college students to creationism, Living Waters seems remarkably uninterested in finding out whether this has been achieved. It dedicates itself to presenting Comfort as assaulted by mouth-frothing atheists who advocate book-burning (just like Hitler!) but who haven't got the balls to put their ideology to the test of a public debate. Not coincidentally, another regular feature of the Living Waters site is a department called "Christian Persecution News."

What all this drama is actually designed to produce is donations, which will "expand this give-away to many more universities." The greater the heathen rage against Comfort and projects like Origin Into Schools, the deeper the faithful will dig into their pockets to support him. It's also worth noting that the more Comfort grandstands for creationism, the more essential Dawkins' combative response appears to be. (Dawkins, like Comfort, has a new book out this fall.) In a culture war that more and more comes to resemble the bouts of the World Wrestling Federation, the two have formed a relationship that could even be called symbiotic. Nature is full of bizarre survival mechanisms, as Darwin himself could surely have testified, but politics produces even stranger ones every day.