Is it tea party time in Texas?

A GOP primary between Gov. Rick Perry and Sen. Kay Bailey Hutchison will test the Republican path for the future 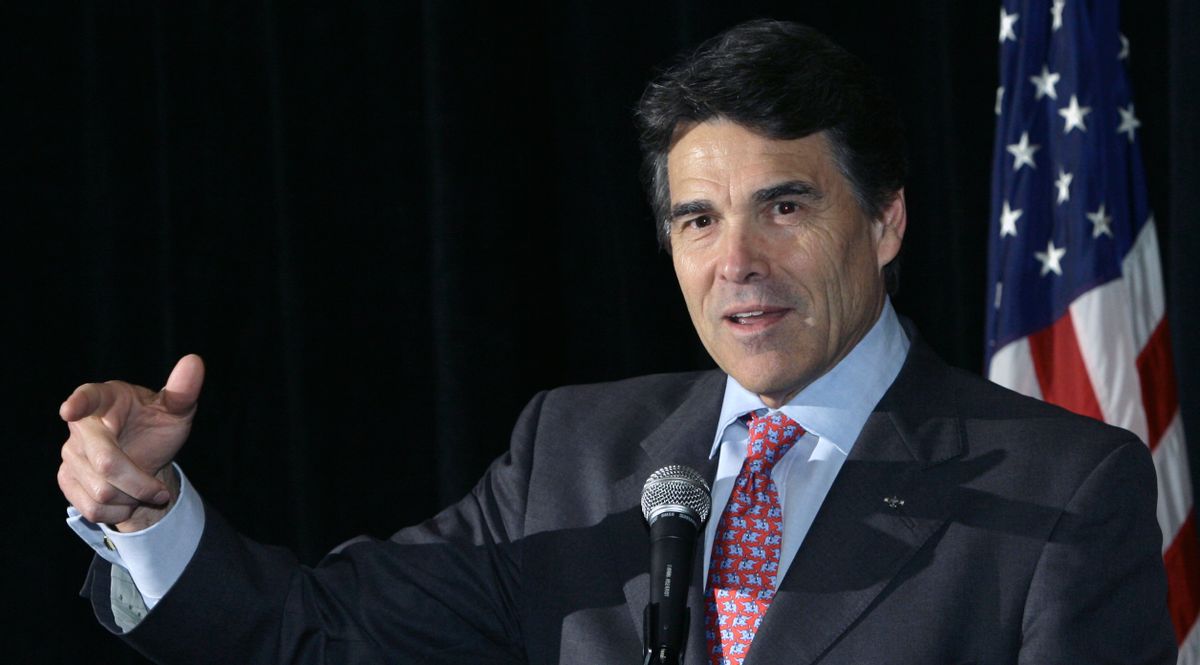 Texas Gov. Rick Perry speaks to a Texas Workforce Commission conference Wednesday, April 22, 2009, in Austin, Texas. Perry, who rejected $550 million in federal stimulus money for the state's unemployment fund despite lawmakers' objections, spoke to the group, where stimulus dollars were the topic of the day. (AP Photo/Harry Cabluck) (Harry Cabluck)
--

Rick Perry strode across the stage last Wednesday night and leaned over into the microphone. This was his moment to shine; two dozen of his fellow Republican governors, and a couple of  hundred big GOP corporate donors, were gathered at a barbecue to celebrate Republican victories and look ahead to more to come in 2010. And Perry, the governor of Texas, wants very much to make sure he's celebrating next year, despite what could be a nasty primary challenge from Sen. Kay Bailey Hutchison to secure the Republican nomination.

Which made his remarks a bit of a mystery. "Virginia is for lovers," he drawled, in an apparent tribute to Virginia Gov.-elect Bob McDonnell, who had just finished talking. "Texas is for jobs." He called up his wife, and some of the other governors' wives, to the stage. "Hey, back in the back," Perry called out. "Y'all hold it down just a minute -- we're fixing to introduce the ladies. Yeah, I want them all up here." Then he rambled through another five minutes about the weather, the trials and tribulations of being a rookie governor and an introduction of the night's musical entertainment, before kicking back to party with the rest of the crowd. At least he didn't talk about Texas seceding from the union, like he did back in April. Meanwhile, his opponent missed the whole thing; Hutchison was stuck back in Washington debating healthcare reform, where she insisted the new mammogram guidelines were merely the first step in a sinister government plot to ration medical treatments.

Welcome to the Lone Star State, where the politics next year are shaping up to be as bizarre as anything else in Texas. Perry, who's been governor since George W. Bush ambled off from Austin to the White House in 2000, is seeking his third full term in office next year, extending a tenure that's already broken all of the state's records. Hutchison, the first woman to represent the state in the U.S. Senate, has been in Washington since 1993. She says she's so committed to the race that she'll resign her Senate seat to run -- but not until after the March primary. (Democrats are likely to coalesce behind Houston Mayor Bill White as their candidate, though he hasn't yet officially declared he'll run.)

In the process, the campaign could wind up going a long way toward helping the Republican Party determine whether it wants to try to appeal to swing voters, or double down on the tea party-loving, Glenn Beck-watching, Sarah Palin book-buying crowd that helped the GOP lose New York's 23rd Congressional District for the first time in over a century earlier this month. Facing a starkly conservative primary electorate, Perry has, well, gone rogue. Besides threatening to dissolve the United States over the Obama administration's policies while addressing a roaring tea party crowd in April, Perry also refused to take $556 million in unemployment aid as part of the economic stimulus package. He talks about the 10th Amendment with the kind of fervor most Republicans reserve for the gun-toting Second; at the GOP governors conference, he urged his colleagues to "stand up and push back against Washington, D.C."

Hutchison, meanwhile, hasn't exactly racked up a liberal record in 16 years in the Senate. But she's more of a country club Republican, firmly conservative on economic issues but not a full-on culture warrior. She voted for the first federal bank bailout last fall and has supported keeping abortion legal, though she also frequently votes to restrict access. If she can wrest the nomination from Perry, that could be a sign the GOP will resist the urges of its conservative id. If she can't, though, it could mean other Republicans will take Perry's pandering to the tea party crowd to heart, and turn the party even harder to the right than it's already heading.

Judging by the early indicators, at least, the conservatives may prevail. Hutchison's poll numbers have dropped steadily since she got into the race over the summer. Mississippi Gov. Haley Barbour, the chairman of the Republican Governors Association, tells anyone who will listen that he wants Hutchison to quit the race so Perry can win the nomination. Perry's first TV ad made it clear he plans to run against Washington as much as against Hutchison -- which could be the right strategy in Texas. "She's claiming, 'I'm from Washington, and I'm here to help you,'" says Austin-based GOP pollster Mike Bonaslice, who's advising Perry. "Good luck with that spin right now. Republican primary voters aren't too keen on what's coming out of Washington the last year or so."

Hutchison's campaign isn't exactly sitting back and taking the abuse. Her own first TV ad promises, "I'm going to do everything I can to stop the government takeover of healthcare." Her campaign comes down to vociferously opposing the White House on issues that matter to Texas conservatives, and bashing Perry for talking tough but not delivering. "Perry is all talk, that's all he's ever been," says Terry Sullivan, Hutchison's campaign manager. "He says what he thinks folks want to hear at any time in his political career."

But that hasn't been enough to endear her to the true believers. "Texas is really -- as I like to say -- a beacon of sanity, fiscal sanity, particularly compared to Washington," says Peggy Venable, Texas state director of Americans for Prosperity, the group that put together the April tea parties. "Most Texans support pushing back on Washington; we certainly don't want to see Washington's policies carried out on Texas." She's backing Perry personally, though AFP is barred from endorsing any candidate. "It'll be tough for Kay Bailey Hutchison to run against Gov. Perry without talking about what's wrong in Texas," Venable says. "And many of us feel like what's wrong is primarily in Washington, not in Texas, and so I think a lot of people aren't going to appreciate a negative campaign in that respect."

Meanwhile, the most hardcore conservatives may not support either Perry or Hutchison. The chairwoman of the Wharton County Republican Party, Debra Medina, is running a grass-roots campaign for the nomination well to the right of both of the major candidates. Her platform includes eliminating property taxes, nullifying federal laws that interfere with Texas sovereignty, banning all abortions and encouraging Texans to buy even more guns than they already have. (Except for the property tax bit, though, that's not all that different from what Perry is running on.)

What Republicans are dealing with in Texas -- and in Florida, where conservative darling Marco Rubio is challenging Gov. Charlie Crist for the GOP nomination for Senate, and in a handful of other races around the country -- is just more fallout from the last few years in politics. When Democrats took control of Congress in 2006, some Republicans figured it was because the GOP had lost touch with voters; other Republicans, ideological kin to the ones who would wind up hurling tea bags at the White House last spring, figured it was because the GOP had lost touch with itself. The elections in Virginia and New Jersey this fall offered one way forward for the party -- present candidates who stick to economic issues, keep whatever radical social agendas they might have in mind tucked firmly away, and don't let Sarah Palin come to town and alienate the moderates. Between now and March, Texas may offer another path, the same one the party's activists are increasingly insisting on following. It could be a bumpy ride for them -- but it should be fun to watch for the rest of us.