As usual, right-wing pseudo-warriors are drowning in extreme cowardice.

John Bolton is the prototypical right-wing pseudo-tough-guy:  cheering on every war he can find without ever getting near any of them.  And as usual for this strain of play-acting, chest-beating warrior, all of the belligerence and craving of vicarious power masks a deep and pitiful cowardice.  That is often the principal purpose of warmongering from a distance.  Yesterday, Bolton -- on "Washington Times Radio" -- revealed that he is so petrified of Terrorists that he would not feel safe in New York City during the trial of Khalid Sheikh Mohammed and would not even allow his family there (audio here):

Host Melanie Morgan: Given the nature and danger of bringing these terrorists to American soil, where do you think is the most safe place to be when they get here and this trial begins? Where would you put your family?

John Bolton: Well, not New York City, I'm afraid to say. This is part of the callousness and the really, lack of professionalism and judgment to put them on trial anywhere in the United States in civilian courts.

The cowardice on display here is difficult to overstate -- and to behold without being ill.  I lived in Manhattan on 9/11 and for many years thereafter.  For weeks -- even months and years after that attack -- it was widely assumed that New York would be a likely target for another attack, but I never heard a single New Yorker -- not one -- talk about fleeing the city or hiding their family in some faraway place.  During the 2004 election, New Yorkers voted for the candidate who wanted to treat Terrorism like a law enforcement problem over the pseudo-tough-guy "war president" by a margin of 80-20.  The fears engulfing Bolton and which he's attempting to infect the country with are found almost exclusively among this species of war-mongers obsessed with flamboyant -- and very public -- rituals where they proclaim their own "strength" and "courage."

John Bolton and his comrades love to run around accusing anyone who doesn't want to wage more wars of being an "appeaser" and "surrendering" to Terrorists, but Bolton's cry here is the ultimate, definitive surrender:  I'm too scared of the Terrorists to go about my normal life.  I'm too petrified even to have my family in the same city as a terrorist trial.  We can't adhere to our normal political system because the Terrorists will kill us all.   Given Bolton's comments, this might be the most ironic and desperate book title in the history of publishing: 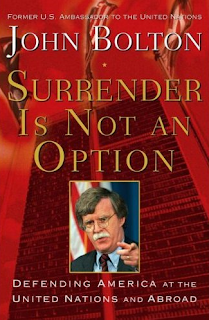 All over the world, countries have put terrorists on trial in their largest and most important cities -- London, Madrid, Mumbai, Denpasar (the capital of Bali).  That's because their countries weren't flooded by meek, frightened little men like John Bolton who want to send their fellow citizens to bomb and invade as many countries as they can find in order to conceal and compensate for the suffocating cowardice revealed by both his life and these comments.  It's a natural human instinct to try to prove to the world that one possesses exactly those characteristics which one most lacks -- which is why right-wing warriors of the type represented by John Bolton are so desperate to prove their Churchillian courage and resolve, always from the safest and most risk-free distances.

Quite related to all of this, Brad at Sadly, No examines what he calls American elites' "nationalist narcissism. They believe not only that America has the right and the duty to be the 'dominant' country in the world, but that every other country in the world should be talking forever about how wonderful we are."  It's not hard to understand the source of their need to constantly have affirmed what Newsweek's Howard Fineman this week calls "our special destiny" as he frets that Obama is failing to salvage it by not keeping the U.S. at the Center of the World.  It's the same need that makes John Bolton and his comrades endlessly try to prove to the world how tough and brave they are even as they hide from and cower before Terrorists.  There are many reasons why America is a country perpetually at war, but this warped and broken psychological state -- weak and frightened individuals cheering on faraway wars as a means of feeling tough and strong, all justified by our own Supreme Specialness -- is one of the leading causes.

UPDATE:  As he does on a virtually daily basis, Glenn Beck today perfectly illustrates this syndrome (h/t Atrios):

All of your recent posts have been on the mark, albeit depressing. Today's Bolton post resonates most with me, because on 9/12 I started working in the Emergency Command Center as I did for the next several weeks. Apart from working on the supply logistics (I was in a different agency then), I attended incident command meetings, which included new rumors of threats and assessments. When the Law Department formed the World Trade Center Unit, I became Assistant Chief and besides my litigation responsibilities, I prepared witnesses for the 911 Commission and NIST investigations. I also supervised the evidence gathering team that was documenting the City's response to the disaster. Through all of that I marveled at the bravery of the unsung heros of the response and aftermath, and not just the uniformed forces. I also saw the bravery of thousands who flocked to the City from all over the country to help.  For a creep like Bolton to try to project his fears on the rest of us is disgusting.

That about sums it up.