Backers deride Katrina-style negligence, haters hate him more each day. Can this presidency be saved? Of course 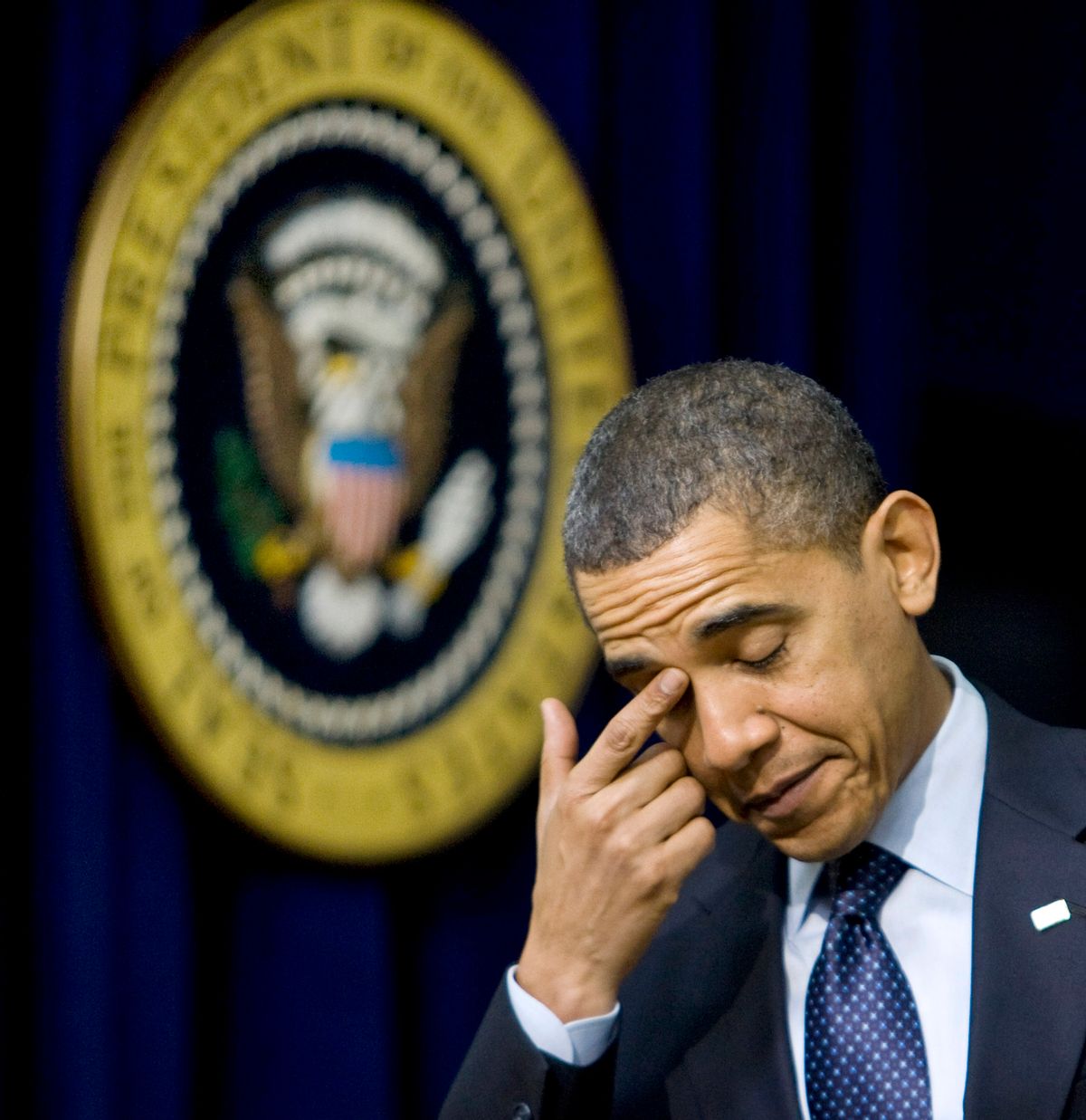 I have a lot to give thanks for this Thanksgiving, but I find myself particularly grateful for one thing: I'm not President Obama. From Arianna Huffington on his left, warning that rising unemployment could be "Obama's Katrina," to the ever-crazier Glenn Beck on his right, threatening to desecrate the memory of Rev. Martin Luther King Jr. with an anti-Obama March on Washington 47 years to the day after King's triumphant convening: His critics are sparing no rhetorical excess in their rush to denounce the president.

And there's a lot to criticize, particularly on the eve of a planned speech Tuesday in which he's reportedly going to try to sell an Afghanistan escalation -- at least 30,000 more troops -- as an exit strategy. Glenn Greenwald has laid out Obama's civil liberties transgressions, and the way he's reversed campaign promises and backed Bush-Cheney policies on rendition, military commissions and government secrecy. Like Huffington, I'm alarmed that the White House seems to be dismissing the need for a second stimulus to deal with what appears to be a "jobless recovery," while also sending word that reducing the deficit is a pressing priority (which is crazy in an ongoing recession).

But using Katrina as a point of comparison is excessive. Katrina was an example of government incompetence and indifference, all at once. Obama is neither incompetent nor indifferent. He is a centrist Democrat, one who brought in a record amount of Wall Street money during the campaign and, not surprisingly, a whole lot of Wall Street veterans with him into the White House. I find that many progressives who jumped on the Obama bandwagon early, selling him as the progressive candidate in the race contrasted with corporate sellout Hillary Clinton, are, like Huffington, among the most disappointed by the president. I was an Obama admirer but a skeptic, and I find I'm less chagrined about the ways he falls short of my ideals than the folks who swooned for him early.

The two most interesting pieces I've read on Obama's troubles this week avoid rhetorical excess and raise more questions than answers, but I recommend them anyway. On Salon, Michael Lind asked "Can Populism Be Liberal?" and answered, maybe: But not as long as the Democrats are the party of Goldman Sachs. Like Huffington, he argues that Obama needs to focus on jobs to keep populist anger from being channeled by the opportunistic, solutions-free GOP. If you missed it, read it over this long weekend.

In his New Yorker blog, George Packer examined Obama's declining popularity and rising troubles at home and abroad, and, like me, argues that part of Obama's problem is the unrealistic expectations of many enthusiasts.  Packer adds this troubling observation:

The Obama movement was unlike other social movements because it began and ended with a person, not an issue. And it was unlike ordinary political coalitions because it didn’t have the organizational muscle of voting blocs. The difficulty in sustaining its intensity through the inevitable ups and downs of governing shows the vulnerability in this model of twenty-first-century, Internet-based politics.

Certainly Arianna Huffington didn't share an agenda with neoconservative Ken Adelman -- but both endorsed Obama. Looking back on the unlikely coalition Obama assembled, at least partly because of the nation's economic collapse and the incompetence and corruption of the Bush administration, it shouldn't be surprising that he began to lose support once he had to actually govern.

I'm a little more patient with Obama because I never saw him as the great left hope, but I agree with liberal critics who want the president to deliver on Democratic ideals and focus on the many casualties of the economy. It's funny but with a Democrat in the White House, Matt Drudge is trumpeting what liberals have always talked about as the "real" unemployment rate -- the unemployed plus the underemployed and those who've given up finding work -- and it's over 17 percent. A third of all African-American men are jobless. Let's welcome the right's sudden focus on the casualties of the economy, and challenge them to come up with solutions. They won't, but Obama can and should.

On this Thanksgiving, I remain grateful Obama is in the White House. I'm thankful Dick Cheney is flapping his gums as a private citizen, not the most powerful man in the world. I believe in Obama's intelligence and decency. Like a lot of liberals, I believe he shares "our" values; I've just never been entirely sure he has either the political courage or savvy it takes to act on them, quite yet.

The real challenge is to show Obama and other shaky Democrats that there are political rewards for representing the Democratic wing of the Democratic Party. Too many politically conflicting interests got to say they elected Obama, and too many progressives jumped too soon to claim him as our own, without asking him to prove it. There's a lot of work left to do to save this country. Have a great holiday, and then let's get back to doing the work.

UPDATE: Yes, I've corrected this piece to note that Beck wants to march on Washington 47 years to the day after King's march. It said 37 years before. Because if it was 47 years, that would make me 51, and I can't really be that old, can I? Also wanted to add another must read: John B. Judis's "Case for Deficit Spending" in The New Republic. Add Judis to the list of people befuddled by the Obama administration's insistence it will soon push deficit reduction.