Liberals want Harry Reid to pass reform under a procedure that doesn't allow filibusters, but it's not so easy 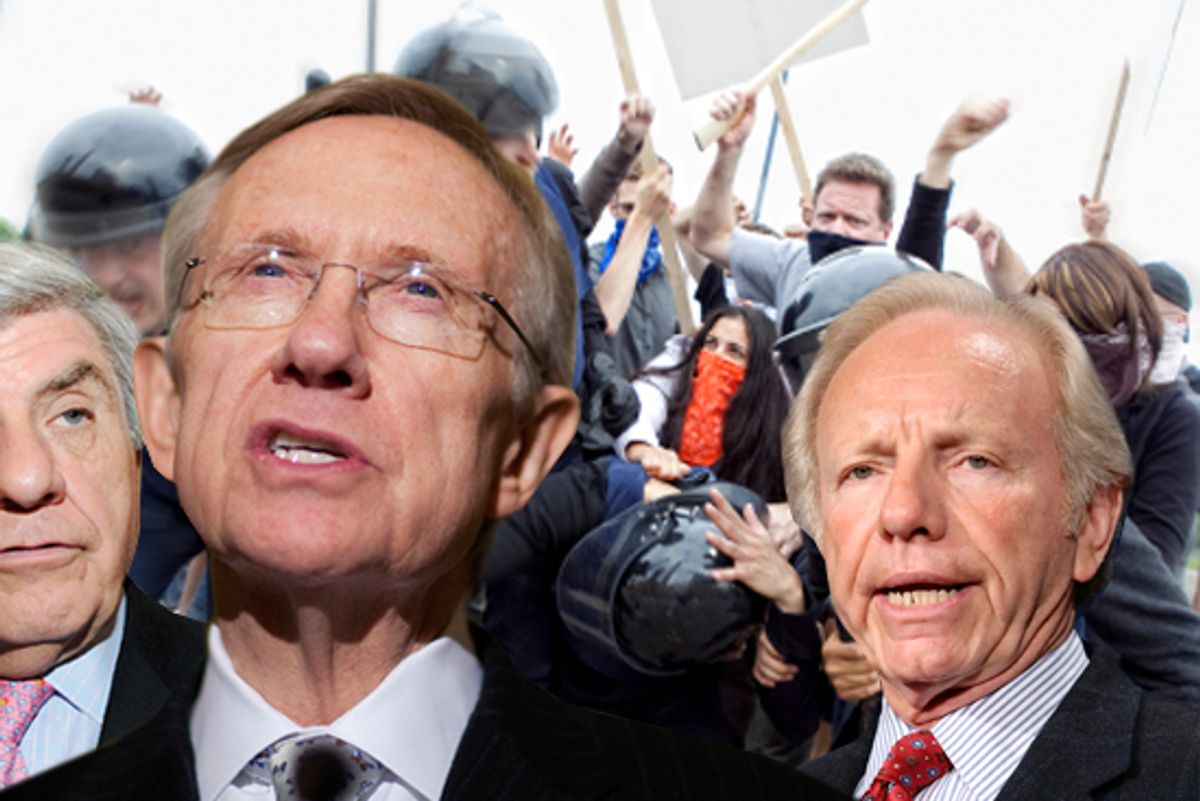 Liberals are frustrated these days, and they have reason to be. They helped Democrats win a theoretically filibuster-proof majority in the Senate, and now the part of the reform bill they prize most highly faces death at the hands of members of the Democratic caucus.

A healthcare reform bill that includes a version of the so-called public option -- a new insurance provider run by the government -- passed its first test in the Senate this weekend. It was a bittersweet moment, though, as at the same time, it was becoming increasingly evident that Democrats won't have the 60 votes needed to break a Republican filibuster if the final legislation still includes a public option. Sen. Joe Lieberman, I-Conn., had already declared his intention to support a filibuster if it came to that, and he's been digging himself in further; Sens. Blanche Lincoln of Arkansas, Mary Landrieu of Louisiana and Ben Nelson of Nebraska could well join Lieberman.

Some liberals, though, have a solution in mind, a silver bullet to save the public option. Led principally by the blog Firedoglake, with encouragement from DailyKos and even former Democratic National Committee Chairman Howard Dean, they're calling on Senate Majority Leader Harry Reid to use a heretofore obscure procedure known as budget reconciliation that forecloses the possibility of a filibuster and would theoretically allow him to pass a bill that includes a public option with only 51 votes.

But as with so much in politics, especially when it comes to Senate procedure, things are not nearly so simple. In fact, if Reid did try using reconciliation, he could end up having to remove key parts of the legislation, not to mention hurting his party politically and losing an extra couple of votes in the Senate -- and, having done all that, he might well find out that he still needed 60 votes in order to get a public option approved.

Reid has ruled out the idea for now, saying last week, "I'm not using reconciliation." And other senators, like Sen. Tom Harkin, D-Iowa, agree with their leader, believing the procedure would end up doing more harm than good. An aide to a senior Democrat, who asked for anonymity in order to discuss the issue more freely, told Salon, "This isn't like a two-week delay, or a three-week delay. This fundamentally changes what we have promised to the American people, and it's risky, and I'm not talking about a little bit of fucking risk, I'm talking about a lot of risk ... It puts universal coverage at risk ... [and] risks allowing insurance companies to discriminate against those with preexisting conditions."

And of those pushing for the use of reconciliation, the aide concluded, "A bunch of people that watched 'Schoolhouse Rock' growing up think that they understand how the Senate works, and they don’t."

The problem is that budget reconciliation isn't really supposed to be used to make policy. Instead, as the Congressional Research Service's Robert Keith said in a 2008 report, reconciliation "is a procedure ... by which Congress implements budget resolution policies affecting mainly permanent spending and revenue programs." In the procedure's early years, however, it was used to circumvent the filibuster on provisions unrelated to that purpose. So in the 1980s, then-Minority Leader Robert Byrd led the Senate in a crackdown. What resulted was the Byrd Rule, which prohibits the Senate "from considering extraneous matter as part of a reconciliation bill."

The definition of "extraneous matter" is fairly broad, and subject to interpretation -- during the Bush administration, Republicans passed tax cuts using reconciliation -- but it generally includes any provision that fails one of these six criteria, as listed in Keith's CRS report:

Even if a provision violates one of these rules, it won't automatically be stricken from a bill. In order for that to happen, a senator has to take action, generally by raising a point of order. Then, the chair (the majority leader or a designee) rules on whether to sustain that point of order and remove the offending part of the bill. That may seem like an easy victory in the making -- Reid rules that the public option passes the Byrd Rule's tests, and that's that -- but that's not necessarily the case.

If Reid did rule the public option out of order under the Byrd Rule, the whole point of using reconciliation would be rendered moot. The only way to overturn the chair's ruling in such a case would be with a three-fifths vote of the Senate -- that is, with the same 60 votes the majority leader would need to round up in order to defeat a filibuster. In that eventuality, there's no way Reid could get the supermajority; Lieberman would certainly abandon him, and moderate Democrats might too. Plus, Byrd has already expressed his distaste for the idea of using reconciliation for health reform, and could be expected to vote to support the rule that bears his name.

Dove wouldn't speculate on what Frumin might decide, or give his own view on the matter, but aides from both parties have met with him, and Reid's office made "preliminary inquiries" about the public option, the aide to a senior Democrat told Salon. No one's offering much detail about what Frumin said, but the fact that Reid has taken reconciliation off the table could well have something to do with those meetings.

The public option might not be the only thing dropped from a bill that's pushed through the Senate using the procedure. Republicans would almost certainly object as often as possible to elements in the legislation, and they'd win many of those battles -- maybe even the war. "If you're a Republican, your job in reconciliation is to do two things: One, to put Democrats in an untenable position to have to vote for or against things that are going to bite them in the ass when they run for re-election; but more importantly, your thing is to find provisions where if you snip that out, it's going to bring down the entire bill," the aide to the senior Democrat said.

Ultimately, passing a reform bill with reconciliation is "feasible," Dove says, but the resulting legislation "would not be pretty, and it couldn't contain a lot of things that people want to be in it."