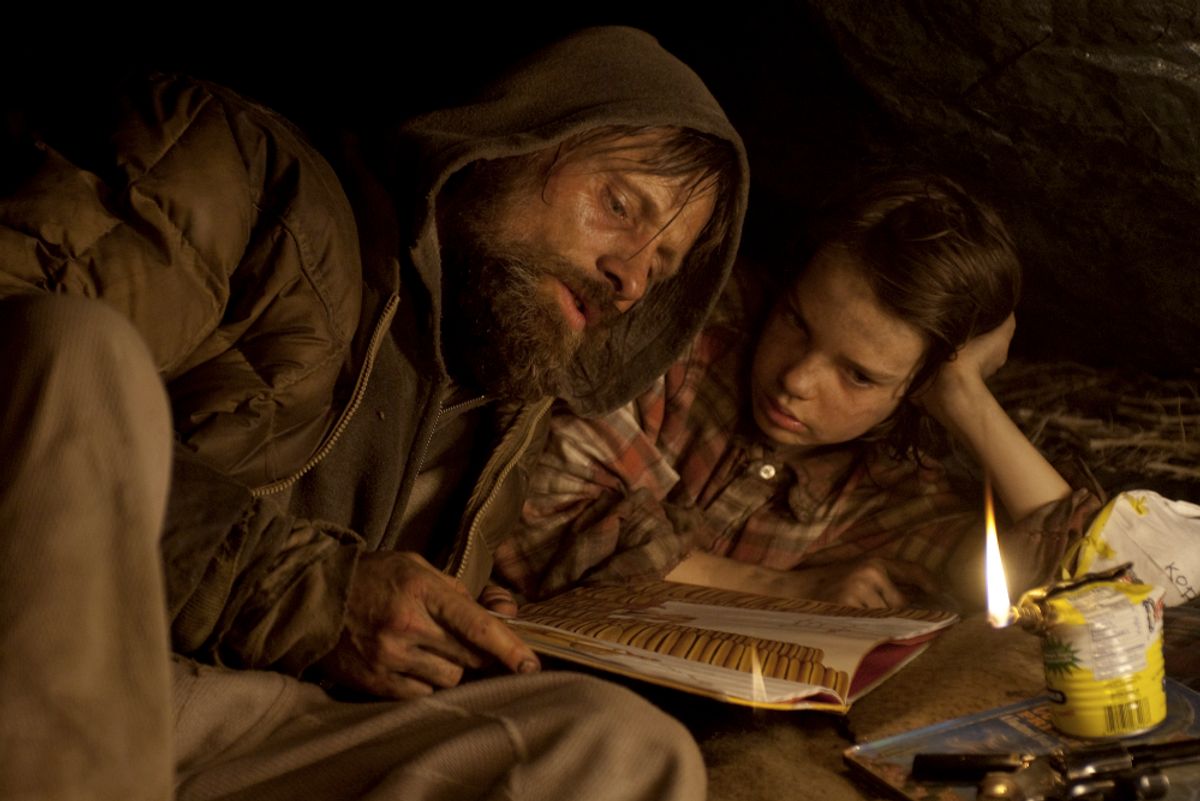 Viggo Mortensen and Kodi Smit-McPhee in "The Road."
--

John Hillcoat's "The Road" is an honorable adaptation of a piece of pulp fiction disguised as high art; it a has more directness and more integrity than its source material, the 2006 novel by Cormac McCarthy. Viggo Mortensen plays a father -- he is referred to only as the Man -- wandering a post-apocalyptic world with his son, the Boy (Kodi Smit-McPhee). This is a world in which the unthinkable has happened, although it's never specified exactly what the unthinkable is: All we see are the effects. All animals have apparently died, and plant life is on the way out, too. Cities and towns lay abandoned and crumbled. And the roads, once so carefully built by man as the connective tissue of civilization, are now trolled by marauding redneck cannibals who have lost every vestige of humanity. In "The Road" the Man isn't just teaching his son how to survive, foraging for food and the like, but teaching him to preserve the very things that make him -- that make us -- human.

That's a potent idea for a movie, or for a book. But McCarthy's plea for the preservation of humanity is so mannered, so wrapped up in its own faux-arty machismo, that his ideas are rendered impotent. His prose, while affecting a tone that's homespun, straightforward and succinct, is far more labored than that of an ornate but lucid writer -- or that of a truly spare writer, like, say, James M. Cain. Once you break them down, his allegedly simple, Everyman sentences ("The days sloughed past uncounted and uncalendared") are gracelessly repetitive. (Uncounted and uncalendared?) The effect is prose that's more rarefied, and more tortured, than the flounciest literary toodling.

McCarthy is clever, though: He makes savvy use of his he-man streak to throw us off the trail of his prissiness. And the details of "The Road" -- which must be particularly wrenching for people who have children, given that nearly every page stokes a common parental fear -- repeatedly ask the same question: Are you man enough to take it?

And that's where Hillcoat, as a filmmaker, proves his sound judgment. By its nature, film is more immediate and visually direct than literature. Hillcoat uses that immediacy to his advantage, but he doesn't abuse it -- in fact, he's more mindful of his visuals, and their ultimate effect, than McCarthy is of his images. His picture is straightforward in ways the novel only pretends to be.

Which is not to say Hillcoat diverges radically from the source material. The movie follows, essentially, the same trail the book does, and Hillcoat -- who previously made the 2005 Australian western "The Proposition" -- and his cinematographer, Javier Aguirresarobe, take care in capturing the grayish, burned-out landscape in which the book takes place. We get long stretches of road, lined with scrubby bushes and delineated by droopy power lines held up, barely, by crooked poles. As the Man and the Boy wander through the looted remains of what once must have been a store or a lunch counter, we see a bold red "ATM" sign on the wall, a relic from the days when money actually meant something. The Boy wears a matted knit cap that once belonged to his mother, and he clutches a toy elephant; the Man is wrapped in raggedy clothes. The two push an old shopping cart, laden with any potentially useful odds and ends they find. They root through abandoned houses for canned goods, though most buildings have long ago been stripped bare. At one point, the Man finds a can of Coke and hands it to the Boy as a treat. The Boy -- who, we've learned, was born just as the world started falling apart -- is surprised by the bubbles, because soda is new to him, foreign to his existence.

Much of the movie's details, that last one included, come directly from the book, but Hillcoat filters them in intelligent ways. Parts of the story are told in flashback: The Boy's mother (played, with understated conviction, by Charlize Theron) argues with her husband about whether or not they should even try to survive as a family. Later, the Man wrestles with a related quandary: He has a gun with only two bullets left (eventually there will be only one). He asks himself, in voice-over, "When it comes to the boy, I have only one question: Can you do it when the time comes?"

It's a measure of Hillcoat's restraint, and that of his screenwriter, Joe Penhall, that that language doesn't come off as standard weatherbeaten McCarthy shtick. As it is, Hillcoat probably relies too much on voice-over, and that blunts the directness of his approach. Still, Hillcoat has made his choices carefully. The movie features several chilling and horrific encounters with the hillbilly cannibals, including one in which the Boy, having entered a seemingly abandoned house with his father, stares at a grimy, bloody basin while clutching his toy elephant -- an image that goes straight over the top, although Hillcoat, wisely, doesn't linger on it as long as he might have. In another scene, the Man and the Boy come across an abandoned camp site, and the camera shows us a bloody piece of something that's obviously human -- Hillcoat doesn't let us close enough to see exactly what that is. Compare that with McCarthy, who describes, in his oh-so-precious detail, the charred carcass of an infant that's been roasted on a spit. Hillcoat's filmmaking shows a level of decency, and of care with visual details, that indicates respect for his audience; he isn't just trying to engage them in a cheap game of chicken.

"The Road" is still a dour workout of a picture. But the performers, especially Mortensen, strive to make it watchable: His face shows the expected degree of worry and anxiety -- he is, after all, navigating the end of the world while trying to care for a child -- but he steers clear of the piousness and sanctimony that the material invites. At one point, when he and the Boy come across an unexpected nest of food and comfort, they wash up and change into some fresh clothes they've found. The Man looks at the Boy and says, "You think I come from another world, don't you?" Mortensen phrases the line more as a statement than a question, and the look in his hollowed-out eyes suggests that his character knows he has a disadvantage over the Boy: He carries the curse of remembering the world as it once was.

Hillcoat's movie takes the core idea of McCarthy's novel -- What does it mean to hang onto our humanity? -- and boils it down to its essence. And though he is, on the whole, too reverent toward the source material, he doesn't buy into the notion that a book or a picture is good just because it's disturbing, because it makes us face ideas -- or, more important, images -- we don't want to face. Hillcoat ends the picture with a lovely and unassailably hopeful image, one that I'm sure some people will see as sentimental. But it also shows that he has very specific ideas about what it is that makes us human. He also knows that sometimes it's not just healthy to recoil -- it's essential.