The crazy, irrational beliefs of Muslims

Tom Friedman explains the real problem: stupid Muslims think the U.S. is about war and aggression.

Major Hasan may have been mentally unbalanced -- I assume anyone who shoots up innocent people is.

ROSE: Now that the war is over, and there's some difficulty with the peace, was it worth doing?

FRIEDMAN: I think it was unquestionably worth doing, Charlie. I think that, looking back, I now certainly feel I understand more what the war was about . . . . What we needed to do was go over to that part of the world, I'm afraid, and burst that bubble. We needed to go over there basically, and take out a very big stick, right in the heart of that world, and burst that bubble. . . .

And what they needed to see was American boys and girls going from house to house, from Basra to Baghdad, and basically saying: which part of this sentence do you understand? You don't think we care about our open society? . . . . Well, Suck. On. This. That, Charlie, was what this war was about.

We could have hit Saudi Arabia. It was part of that bubble. Could have hit Pakistan. We hit Iraq because we could. That's the real truth.

That's what I believe ultimately this war was about. And guess what?  People there got the message, OK, in the neighborhood. This is a rough neighborhood, and sometimes it takes a 2-by-4 across the side of the head to get that message.

Tom Friedman can declare with a straight face that "anyone who shoots up innocent people is ... mentally imbalanced" without seeing how clearly that applies to himself and those who think like he does.  It's that self-absorbed disconnect -- seeing Hasan's murder of American soldiers as an act of consummate evil and sickness while refusing to see our own acts in a similar light -- that shapes most of our warped political discourse.  And note the morality on display here:  Hasan attacks soldiers on a military base of a country that has spent the last decade screaming to the world that "we're at war!!," and that's a deranged and evil act, while Friedman cheers for an unprovoked war that killed hundreds of thousands of innocent civilians and displaced millions more -- all justified by sick power fantasies, lame Mafia dialogue, and cravings more appropriate for a porno film than a civilized foreign policy -- and he's the arbiter of Western reason and sanity.

But even worse is the glaring dishonesty driving everything Friedman writes here.  Our perpetual war cheerleader today laments that there is a "Narrative" plaguing the Muslim world that is a "cocktail of half-truths, propaganda and outright lies about America."  These crazy, stupid, irrational Muslims seem to believe "that America has declared war on Islam, as part of a grand 'American-Crusader-Zionist conspiracy' to keep Muslims down," when the reality is that "U.S. foreign policy has been largely dedicated to rescuing Muslims or trying to help free them from tyranny."  They see devastating attacks launched by the U.S. and Israel collectively on six Muslim countries in the last decade (including Gaza) -- all of which Friedman (along with his fellow Muslim-condemning NYT colleague) supported, naturally -- and those Muslims simply refuse to understand why they deserved it and why it was all for their own Good.  According to Friedman, these benighted Muslims simply refuse to see the truth:  that our two post-9/11 wars were "primarily to destroy two tyrannical regimes -- the Taliban and the Baathists -- and to work with Afghans and Iraqis to build a different kind of politics."

Six months into the war, Friedman proudly proclaimed that "the real truth" was that we invaded Iraq to take out our "big stick" and tell them to "Suck On This," to take a 2-by-4 across their heads, and that we attacked them "because we could."  In his 2003 explanation with Charlie Rose, did he even mention what he now claims was the war's "primary" purpose:  "to destroy two tyrannical regimes ... and to work with Afghans and Iraqis to build a different kind of politics"?  No.  In a very rare moment of candor for this rank war-loving propagandist, he announced very clearly the real purpose of the war, only for him to now turn around and accuse Muslims of being blind and hateful because they heard his message loud and clear, and because they don't express enough gratitude for all the gracious Freedom Bombs we've dropped -- and continue to drop -- on their homes, their villages, their families, their children and their society.  Apparently, they heard deranged, chest-beating bellowing like this from America's Top Foreign Policy Expert and took it seriously:

No, the axis-of-evil idea isn't thought through -- but that's what I like about it. It says to these countries and their terrorist pals: ''We know what you're cooking in your bathtubs. We don't know exactly what we're going to do about it, but if you think we are going to just sit back and take another dose from you, you're wrong. Meet Don Rumsfeld -- he's even crazier than you are.''

There is a lot about the Bush team's foreign policy I don't like, but their willingness to restore our deterrence, and to be as crazy as some of our enemies, is one thing they have right. It is the only way we're going to get our turkey back.

It's certainly true that -- as all government leaders do -- Muslim tyrants and radical Islamists exploit foreign threats to distract attention from their own shortcomings and entrench themselves in power.  Being able to depict the U.S. as a war-mongering and aggressive threat to the Muslim world is a benefit to oppressive Arab leaders as well as radical Muslim groups.  But nobody fuels that message more than the Tom Friedmans of the world, whose hate-mongering words and bloodthirsty policies endow that message with more than a sufficient amount of truth.

UPDATE:  Foreign Policy just released a survey from what it calls its "Top 100 Global Thinkers," a list that includes Friedman, Robert Kagan, Henry Kissinger, and David Petraeus, among others, and here were the results for this question:  "What is the Most Dangerous Country in the World": 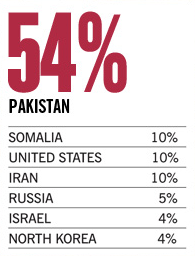 Ten percent of Foreign Policy's so-called "Smart Crowd" say the U.S. is "the most dangerous country in the world" (tied with Iran and Somalia), while 4% say it's Israel (tied with North Korea).  It seems that the mentality Friedman condemns as the province of primitive, paranoid Muslims extends a bit farther than that.

UPDATE II:  George Orwell, in describing "political speech and writing in our time," perfectly captured what Tom Friedman does and who he is -- along with most of our most prominent establishment political writers (see the last comment here).

UPDATE III:  As Jonathan Schwarz documented back in 2004, Friedman's pretense -- that sending invading armies and bombs to another country is an act of great generosity which merits the gratitude of the targets -- is, historically, a very typical sentiment for aggressors to espouse about themselves.