While Americans suffer, glutted banks refuse to renegotiate mortgages or scale back bonuses 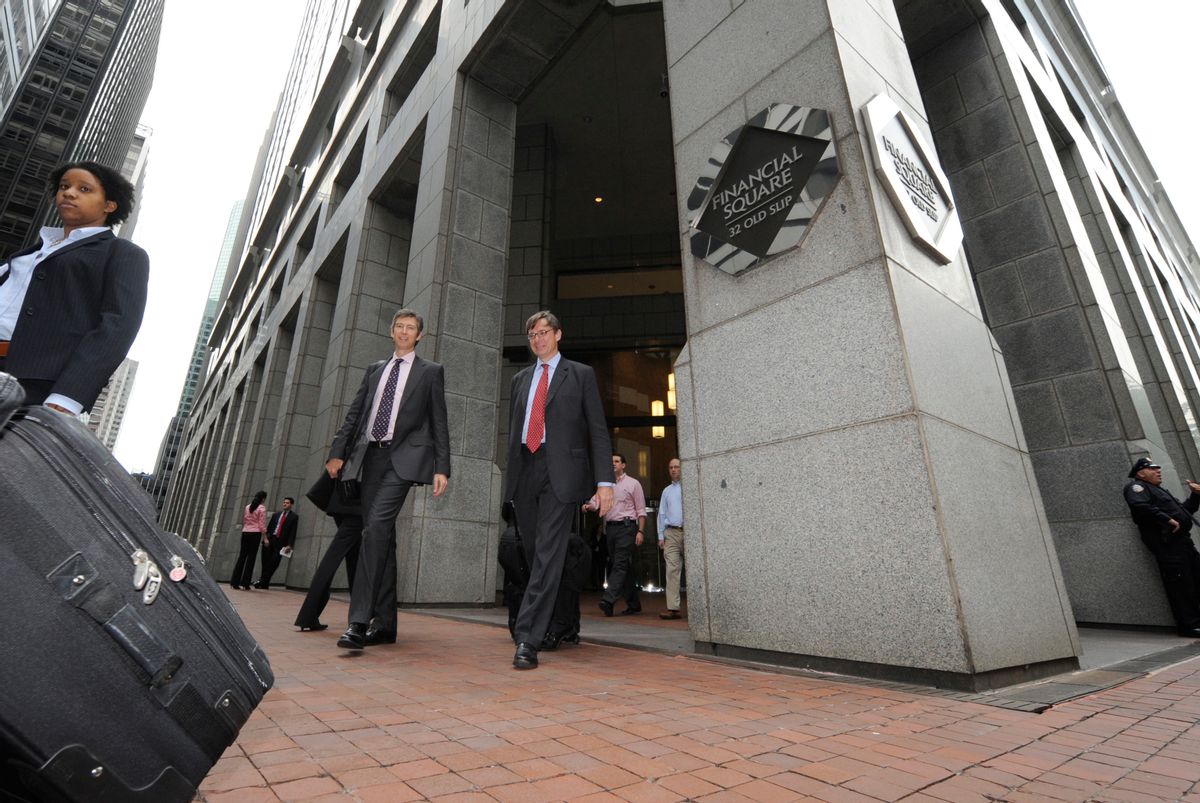 One out of four homeowners is now under water, owing more on their homes than the homes are worth. Why? The biggest single factor behind the housing crisis is rising unemployment. According to the latest ABC-Washington Post poll, one out of every three Americans has either lost their job or lives in a household with someone who has lost a job. Today it takes two and sometimes three incomes to buy the groceries and pay the mortgage or the rent. So if one of those incomes is gone, a homeowner can't make the payment.

The scourge of unemployment is splitting America into three groups: 1) the third just mentioned, whose households are in danger of losing their homes and whose kids are surviving on food stamps (that's up to one in four children in America today); 2) the vast majority of Americans who are managing but worried about keeping their jobs and homes; and 3) a small number who are taking home even more winnings than they did in the boom year 2007.

Prominent among Category 3 are Wall Street bankers, many of whom are now concluding their most profitable year ever. Goldman Sachs is so flush it's preparing to give out bonuses in a few weeks totaling $17 billion. That will mean eight-figure compensation packages for lots of Goldman executives and traders. JPMorgan Chase is rumored to have a bonus pool of around $5 billion. The three other major Wall Street banks are ratcheting up their compensation packages so their "talent" won't be poached by Goldman or JPMorgan.

Wall Street is booming again in large part because the rest of America -- categories 1 and 2, above -- bailed it out to the tune of $700 billion last year. The Street has repaid some of that but, according to the bailout program's inspector general, much of it is gone forever. For example, the taxpayer money that bailed out giant insurer AIG went directly through AIG to its "counterparties" like Goldman Sachs -- to whom Tim Geithner, according to the inspector general, gave away the store. As Goldman Sachs prepares to dole out some $17 billion to its executives and traders, it's worth noting that Goldman received $13 billion a year ago from the rest of us via AIG and Geithner, no strings attached.

Which brings us back to homeowners who are falling further behind. The $75 billion federal program designed to bribe banks to modify mortgages has been a bust. No one knows the exact number of mortgages that have been modified (that will be reported next month) but housing experts I've talked with say it's a tiny fraction of the number of homeowners in trouble. Seems that the big banks can't be bothered. "Some of the firms ought to be embarrassed," Michael Barr, the assistant Treasury secretary for financial institutions, told the New York Times.

Barr says the government will try to use shame as a corrective, publicly naming institutions that have moved too slowly. But the banks have done almost nothing to date. "We've made dramatic improvements, and we continue to try to get better," says a spokesman for JPMorgan Chase, but as a practical matter JPMorgan has done squat.

Shame? If we've learned anything over the last year, it's that Wall Street has none. Ten months ago Wall Street lobbyists beat back a proposal to give bankruptcy judges the right to amend mortgages in order to pressure lenders to reduce principle owed, just like Wall Street lobbyists are now beating back tough regulations to prevent the Street from causing another meltdown.

Shame? For Wall Street, it all comes down to P.R., at minimal cost. Goldman Sachs, attempting to preempt a firestorm of public outrage when it dispenses its $17 billion of bonuses, is setting up a crudely conceived $500 million P.R. program to help Main Street.

Shame won't work. Only political muscle and courage will. Congress and the Obama administration should give homeowners the right to go to a bankruptcy judge and have their mortgages modified.

And while they're at it, resurrect the Glass-Steagall Act that used to separate investment from commercial banking, so Wall Street can't continue to use other people's money to gamble.

Finally, before Goldman hands out $17 billion in bonuses, claw back the $13 billion Goldman took from AIG and the rest of us and add it to the pool of money going for mortgage relief.