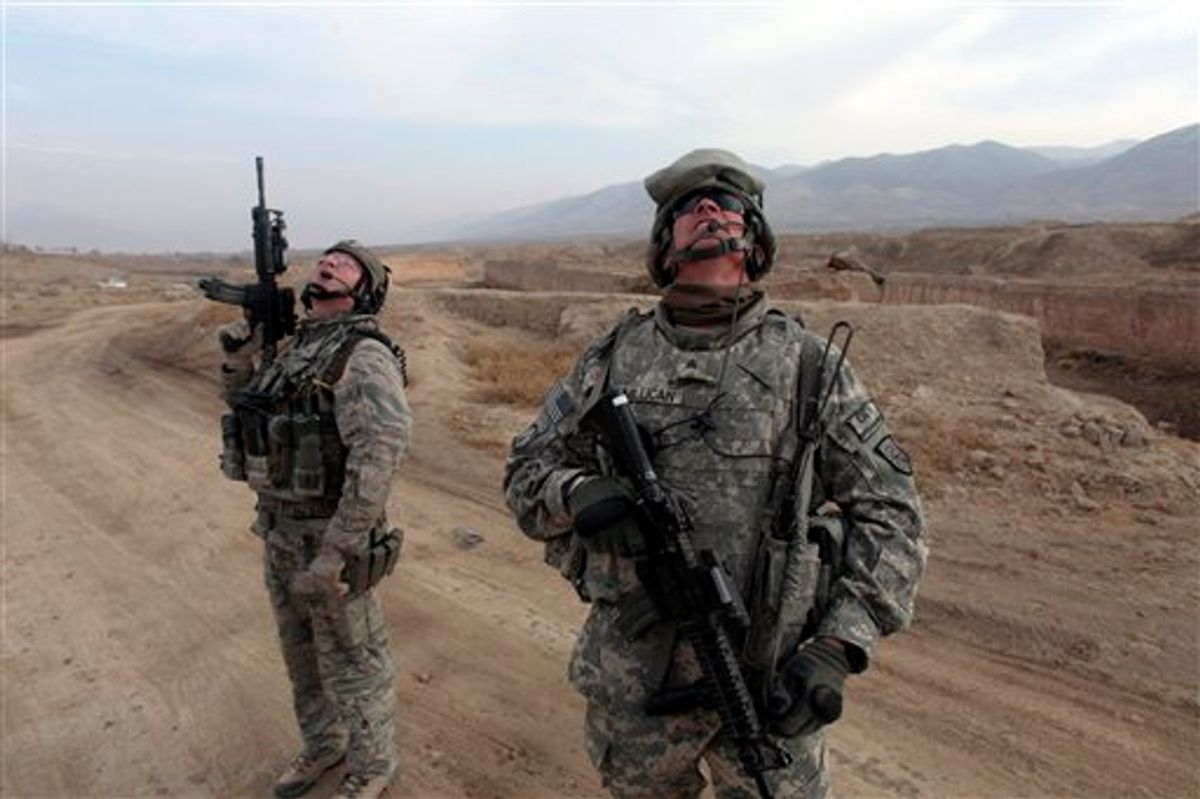 In order to prepare Americans for Obama's Afghanistan escalation speech tonight at West Point (at least he's not wearing a fighter pilot costume), White House officials have been dispatched to speak to the media (anonymously, of course) to preview all of the new and exciting aspects of the President's plan.  As a result, media accounts are filled with claims that there are major changes ordered by Obama that will transform our approach there.

But to anyone with a memory that extends back for more than a few weeks, all of this seems anything but new.  In January, 2007, George Bush delivered a speech to the nation announcing his escalation in Iraq -- that one only 20,000 troops, compared to the 30,000-40,000 Obama has ordered for Afghanistan.  It's worthwhile to compare what Obama officials are excitedly featuring as new and innovative ideas with what Bush said; I'm not comparing the Iraq and Afghan escalations:  only the rhetoric used to justify them.

ABC News:  "While tomorrow night's speech will have many audiences ... a senior administration official tells ABC News one key message will resonate with all of them: 'The era of the blank check for President Karzai is over. . . The president will talk about, this not being 'an open ended commitment'..."   Bush:

The Afghan leader has heard our ultimatum and understands it ("The president was described as heartened to hear that Karzai spent much of his inaugural address discussing corruption").  Bush:

The Prime Minister understands this. Here is what he told his people just last week: "The Baghdad security plan will not provide a safe haven for any outlaws, regardless of their sectarian or political affiliation."

The Afghan government will have strict benchmarks they must meet (Gibbs:  "the new strategy will include many of the same benchmarks, but with ramifications to US support to Karzai and his government if they are not met").  Bush:

A successful strategy for Iraq goes beyond military operations. Ordinary Iraqi citizens must see that military operations are accompanied by visible improvements in their neighborhoods and communities. So America will hold the Iraqi government to the benchmarks it has announced.

We're going to ensure that Afghan troops are trained to provide the security which the country needs (Gibbs:  "the goal and the purpose of the strategy is to train an Afghan national security force, comprised of an Afghan national army and a police that can fight an unpopular insurgency in Afghanistan so that we can then transfer that security responsibility appropriately back to the Afghans").  Bush:

Our troops will have a well-defined mission: To help Iraqis clear and secure neighborhoods, to help them protect the local population, and to help ensure that the Iraqi forces left behind are capable of providing the security that Baghdad needs. . . . We will help the Iraqis build a larger and better-equipped army -- and we will accelerate the training of Iraqi forces, which remains the essential U.S. security mission in Iraq.

We're going to have a strategy based on funding and strengthening local leaders ("much of it will be targeted at local governments at the province and district level, and at specific ministries, such as those devoted to Afghan security").  Bush:

We will give our commanders and civilians greater flexibility to spend funds for economic assistance. We will double the number of provincial reconstruction teams. These teams bring together military and civilian experts to help local Iraqi communities pursue reconciliation, strengthen moderates, and speed the transition to Iraqi self reliance.

If we don't escalate, Al Qaeda will get us ("The focus of the new strategy, sources say, will be going after al Qaeda and affiliated extremists").  Bush:

As we make these changes, we will continue to pursue al Qaeda and foreign fighters. Al Qaeda is still active in Iraq. Its home base is Anbar Province. Al Qaeda has helped make Anbar the most violent area of Iraq outside the capital. A captured al Qaeda document describes the terrorists' plan to infiltrate and seize control of the province. This would bring al Qaeda closer to its goals of taking down Iraq's democracy, building a radical Islamic empire and launching new attacks on the United States at home and abroad.

We must fulfill our moral responsibility to stand with the Afghan people.  Bush:

From Afghanistan to Lebanon to the Palestinian Territories, millions of ordinary people are sick of the violence and want a future of peace and opportunity for their children. And they are looking at Iraq. They want to know: Will America withdraw and yield the future of that country to the extremists -- or will we stand with the Iraqis who have made the choice for freedom?

Obama's decision came only after serious and careful deliberations on all the competing options (ABC: "The decision comes after months of discussions and deliberations with the president's national security team").  Bush:

Our new approach comes after consultations with Congress about the different courses we could take in Iraq. Many are concerned that the Iraqis are becoming too dependent on the United States -- and therefore, our policy should focus on protecting Iraq's borders and hunting down al Qaeda. Their solution is to scale back America's efforts in Baghdad or announce the phased withdrawal of our combat forces. We carefully considered these proposals. And we concluded that to step back now would force a collapse of the Iraqi government, tear that country apart, and result in mass killings on an unimaginable scale. Such a scenario would result in our troops being forced to stay in Iraq even longer, and confront an enemy that is even more lethal. If we increase our support at this crucial moment, and help the Iraqis break the current cycle of violence, we can hasten the day our troops begin coming home.

To keep the asthetics the same, we even have Michael O'Hanlon leading the way, as always, providing the Serious Expertise to justify further war.

This is all to be expected.  Ostensible justifications for war are more or less universal, as is the familiar mix of fear, claims of moral necessity (and superiority), and appeals to patriotism and military love that are always hauled out to justify their continuation and escalation.  Beyond that, Bush's escalation was based on many of the same counter-insurgency dogmas in which Obama's escalation is grounded, designed by many of the same people.  So it's anything but surprising that it all sounds remarkably similar.  And it's possible that once we hear the actual speech, rather than the White House's coordinated depiction of it, that there will be new elements.

Still, this pretense that Obama spent months carefully deliberating in order to devise some new and exotic thought pattern about the war seems absurd on its face.  At least if his top aides are to believed, what he intends to say tonight should sound extremely familiar.

In The Guardian yesterday, the courageous Malalai Joya -- who might actually deserve the Nobel Peace Prize -- explains why escalation and ongoing occupation are so devastating for her country.

And on that note:  Obama is scheduled to receive his Nobel Peace Prize next week in Oslo.  No matter your views on Afghanistan, and no matter your views on whether he deserved the Prize, is there anyone who disputes that there is some obvious tension between his escalating this war and his receiving this Prize?  Unless one believes that War is Peace, how could there not be?

UPDATE:  The most bizarre defense of Obama's escalation is also one of the most common:  since he promised during the campaign to escalate in Afghanistan, it's unfair to criticize him for it now -- as though policies which are advocated during a campaign are subsequently immunized from criticism.  For those invoking this defense:  in 2004, Bush ran for re-election by vowing to prosecute the war in Iraq, keep Guantanamo open, and "reform" privatize Social Security.  When he won and then did those things (or tried to), did you refrain from criticizing those policies on the ground that he promised to do them during the campaign?  I highly doubt it.