Why emoticons need to die :-( 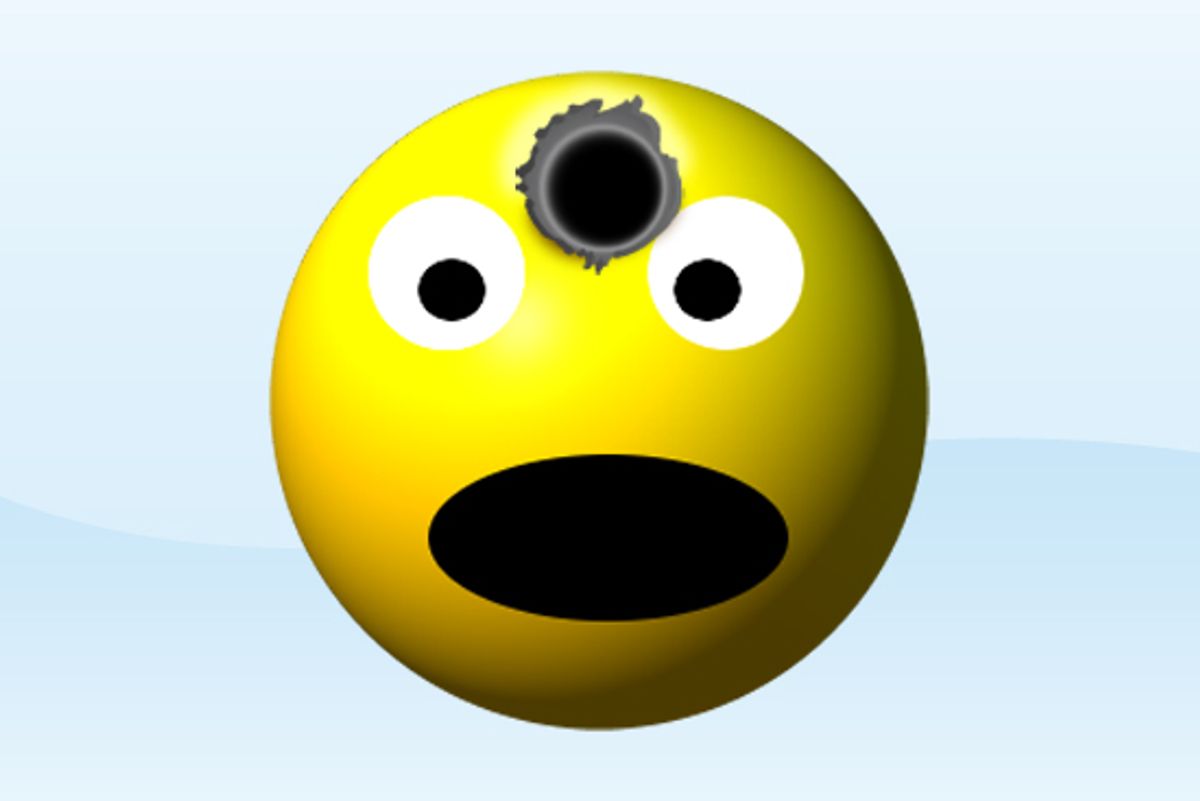 Since the dawn of humanity, mankind has communicated via symbols. Indeed, it was a turning point for civilization when the Sumerians carved a GOT BARLEY? icon on a rock. (The Sumerians also invented beer, making them the forerunners of drunken texting.) Letters and punctuation are nothing but code for our thoughts and ideas. Why then do I feel all stabby when I get a message that ends with three short marks: a colon, a hyphen and a parenthesis?

The smiley and all its variants have irked me from the day I first dialed up Usenet nearly 17 years ago. Initially I didn't know what it meant, until a helpful netizen told this newbie to "turn your head sideways."

Then I saw it. Once you've seen the smiley, you can never unsee it -- especially when a large number of your correspondents use it with the gusto of a drag queen dispensing snaps at a "Project Runway" marathon. Smart people, nay, brilliant ones use emoticons. Articulate, bright, funny people. Yet when I see a smiley, my first thought is, "What are you, 12 years old?"

The emoticon evolved out of tech culture. To be fair to the geekier among us (aka My People), folks who spend a lot of time in front of computer screens aren't the most socially adept under the best of circumstances. Now take away visual clues -- the human smile, the knowing touch, the gentle, jokey jab to the shoulder that would soften a real world "RTFM, NOOB" -- and you can understand what a glorious day it must have been when man realized he could, with three simple keystrokes, put a facial expression on an impersonal medium.

That man was Scott Fahlman. On Sept. 19, 1982, the Carnegie Mellon computer scientist sent out a message with the subject head ":-)." It was intended to clarify communication on a message board at the university, and it read, "I propose the following character sequence for joke markers: :-). Read it sideways. Actually, it is probably more economical to mark things that are NOT jokes, given current trends. For this, use :-(."

The genie was out of the ASCII bottle.

I spoke to Fahlman a few weeks ago and asked his opinion of what he had wrought.

"It's survived this long for a reason," he told me. "It's handy. We're not all great writers. This is very informal, quick-and-dirty communication. You don't want to explain if it's funny or not. I send a lot of messages where I use sarcasm," he continued. "If I toss one smiley off, it'll save me a couple hundred fights, and it's no big deal."

Yet even the Victor Frankenstein of emoticons has his limits. Reflecting on the newer, preset smileys (or the zillions of alternatives mailer programs helpfully offered), Falhman said, "I think those garish yellow circles are ugly. There's creativity in doing emoticons, in making up your own now and then."

My friend Craig Ward, a typographer whose Web site is called Words Are Pictures and who shares what he calls my "deep-rooted respect for punctuation," ponders in the reverse direction. "A smiley face graphic is different, conceptually," he says. "I think in that respect the emoticon as a cluster of symbols is on its way out ...  So hooray for that."

But though Ward admits, "I've used them before. A lot, if I'm honest," he also says, "I'm using emoticons less. I think they've just been overused."

Whether they're humble punctuation marks or shape-shifting, animated gifs matters not -- I loathe them in all their forms. I see a face at the end of a sentence, I start lopping off IQ and attractiveness points for the person who wrote it.

My gripe with emoticons has little to do with my fogeyism. I may be over 40 and need reading glasses to text, but who loves the smiley and its ancillary symbols more than your grandma? Unlike the cryptic acronyms and mystifying gamer terms that baffle us oldsters, the emoticon does not discriminate on the basis of age. But there is something gratingly cute about it, something breezily, notebook doodley in its nature that makes me want to smack the half circle off its stupid face.

Maybe that's because I don't entirely trust it. Of all the crimes perpetuated by the emoticon, surely the most grievous is its role in the passive-aggressive insult. There's at least an honesty to a plain old sarcastic, snotty comment. A group e-mail or Facebook comment to the effect of "Nice dress – I didn't know there was a hooker convention in town. ;-)" or "I guess I'll do all the cooking again like I always do! :-)" is just bullshit. And sarcasm with a wink isn't sarcasm. More than a quarter-century into Internet culture, we can safely say the emoticon has not eradicated flaming or general online assholery. It' s just another useful tool.

Even when the emoticon speaks truth, I submit that not every communication requires a clarification regarding how it makes you feel. A statement of action, i.e., "I'm heading in to the meeting now," doesn't require a window into your soul. If you're telling me you're stuck in traffic or that you had a lovely dinner last night, assume I can guess the appropriate psychological response that accompanies it -- or that I very likely don't give a toss. Furthermore, if you are in fact expressing how you feel, i.e., "I am so despondent," the words stand on their own just fine without benefit of a mopey icon.

Sure, not all of us are writers. If a friendly icon greases the path of online relations, where's the harm? After all, we already employ punctuation to more clearly express ideas. What is an exclamation point for if not to convey heightened emotion? What are italics for if not emphasis (or to distinguish a bon mot en Français)? And if I should write, "I'm blushing here," how is that so different from sending an image of a red-cheeked face?

But the emoticon is so damn needy. The smiley is the rimshot of online communication (which makes the frowny the sad trombone). It clings to your virtual leg, begging for your approval. Love me! it says. Understand me! I am trivial and light of heart even when in despair! (The mere existence of an emoticon for "brokenhearted" is enough to, well, break my heart.)

So let me meet your thoughts halfway. Leave a little something to the imagination. You don't have to wow me with your dazzling prose (although dazzling prose is always welcome). And we don't need to draw a picture, I promise. Trust that if something is making you smile, you can tell me about it and I'll understand. Trust that even though you can't see me, my non-yellow, punctuation-free face will be smiling back.