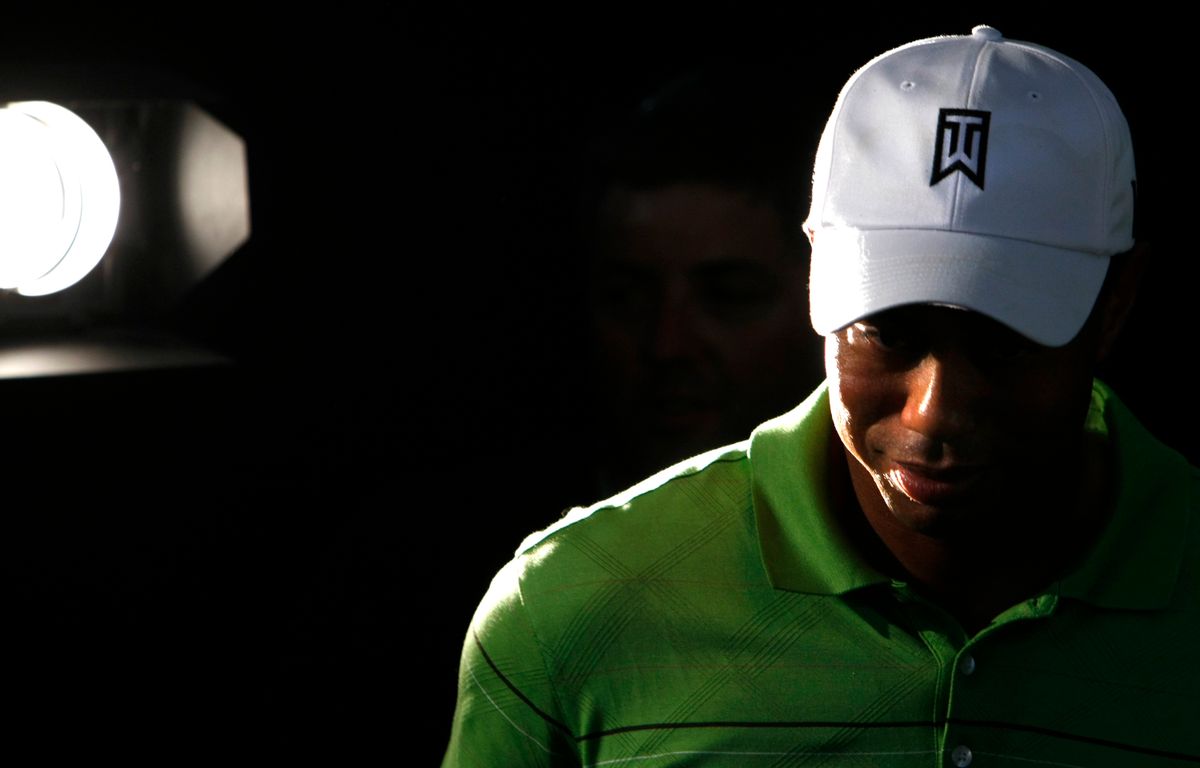 "Black guy dings his car." That's how Wanda Sykes  summed up Tiger Woods' car accident on her show Saturday. Of course, there's more to it than that.

As you've no doubt heard by now, the world's highest-paid athlete  crashed his Cadillac SUV into a fire hydrant and tree outside his home in Windermere, Fla., at the godforsaken hour of 2:30 on the morning after Thanksgiving. Woods' wife, 29-year-old Swedish ex-model Elin Nordegren, apparently used a golf club to smash the car's windows in the incident.

Was it a courageous rescue attempt, or was it, as TMZ reported Woods told a friend, a situation wherein Woods' beautiful wife and the mother of his two very young children "went ghetto" on him over an alleged affair?

Woods stonewalled police, offering nothing but silence and then, finally, a cryptic, conspiracy-theory-inducing statement on his Web site: "This situation is my fault, and it's obviously embarrassing to my family and me," he wrote. "I'm human and I'm not perfect … The only person responsible for the accident is me." But after downplaying the incident, Woods backed out of his final tournament of the year, the Chevron World Challenge, on Monday, citing his injuries as the cause. For a starved media over a long holiday weekend, this has been so much chum in the "breaking news!" water.

There is something morbidly poetic, in an O. Henry by way of "Law & Order" way, about the idea that the most famous golfer in the history of the sport may have tasted the business end of his own club. And the idea that there may have been some whoopass dispensing from the guy's wife makes it all the more luridly fascinating.

A woman beating on a man? A white woman, a former model, beating on a successful, scandal-free athlete who's a double minority? Rumors of another woman -- and not just any other woman, but a party-promoting brunette who lost her fiancée on 9/11, whose name surfaced just two days before the crash? Race! Sports! Gender! Adultery! Terrorism, for heaven's sake! Oh lord, please let there be a sex tape.

That sound you hear is humanity's collective brain exploding at the different angles we can work from here. Or, as Wanda Sykes broke it down Saturday night, what we may have on our hands is a case of a "big Viking bitch" telling her husband to "Get your black Asian ass back in here!" Tiger thinks we're just going to look away and respect his privacy with all that lurking under the surface? Oh, that is rich! That is Nike endorsement-level rich! No, we're going to keep sniffing around this thing like truffle pigs in a Perigord field.

Woods should know that. He is famous enough to grasp that the media and the American public are as skilled at tenacity as he is at hitting little balls. If there's nothing more to tell, then those odd "I'm human" messages need some major clarification ASAP. And if there's more to the story, the dude would do well to take a deep breath and get the real details out there before TMZ and the National Enquirer make merry sport of it, dragging Woods and everyone he's ever spoken to through mud that will make Carrie Prejean look fresh and clean.

But Woods is no self-deprecating late-night talk show host, nor is he a contrite conservative Southern governor. He is a quiet, circumspect man who has somehow managed to carve out a modicum of dignity and peace in a life lived entirely in the public eye.

And there's more to the situation -- much more at stake than mere public image and product endorsements. As Hannah Rosin pointed in Slate, the notoriously private Woods' retreat into double secret stiff upper lip land may have to do with Florida's strict domestic abuse laws. If he says his wife went ballistic, she would be arrested -- whether the golf superstar presses the matter or not. But there's still more -- Nordegren is married to a U.S. citizen, but she is Swedish born. I spoke Monday to a friend who works in Florida EMS who mused, "Is she an American citizen? If she's convicted of a felony she could be deported."

My friend added that the intensity of law enforcement attention for this kind of fender bender is highly unusual. "I've run plenty of these 'accidents,'" the paramedic said, "and I've never seen an investigation on an accident so minor, especially on the person's property."

It's a minor accident. But it's a big story. A very, very small number of people on the planet witnessed firsthand the incidents leading up to and following Woods' car crash. Quite a few of us, however, to our infinite shame, can attest that little of noble import goes on at 2:30 in the morning, especially after one of those family holidays. Certainly even fewer of those activities involve driving into trees and smashing windows with golf clubs. In other words, Tiger, we've been there. We all go a little ghetto sometimes. We just don't have a global brand and a possible spousal arrest on the line.

So while we would love to be sympathetic, to step back and give Woods a little of that "understanding that my family and I deserve some privacy," that's probably not going to happen. Our appetite is too great, and this is a tale that hits too many sensation-driven taste buds. There's no victory in coyness, not in the waning days of this decade of oversharing, and no nobility in having Perez Hilton draw tears on an image of your face. The only triumph is beating the vulture to the punch. Woods is more familiar with winning than most of us could ever dream. But this is a whole new game for him, one that's far from fair. He's just got to figure out how to play it.