Tiger by the tail

The golf legend and symbol of cultural harmony crashes and burns. Maybe we're all better off for it 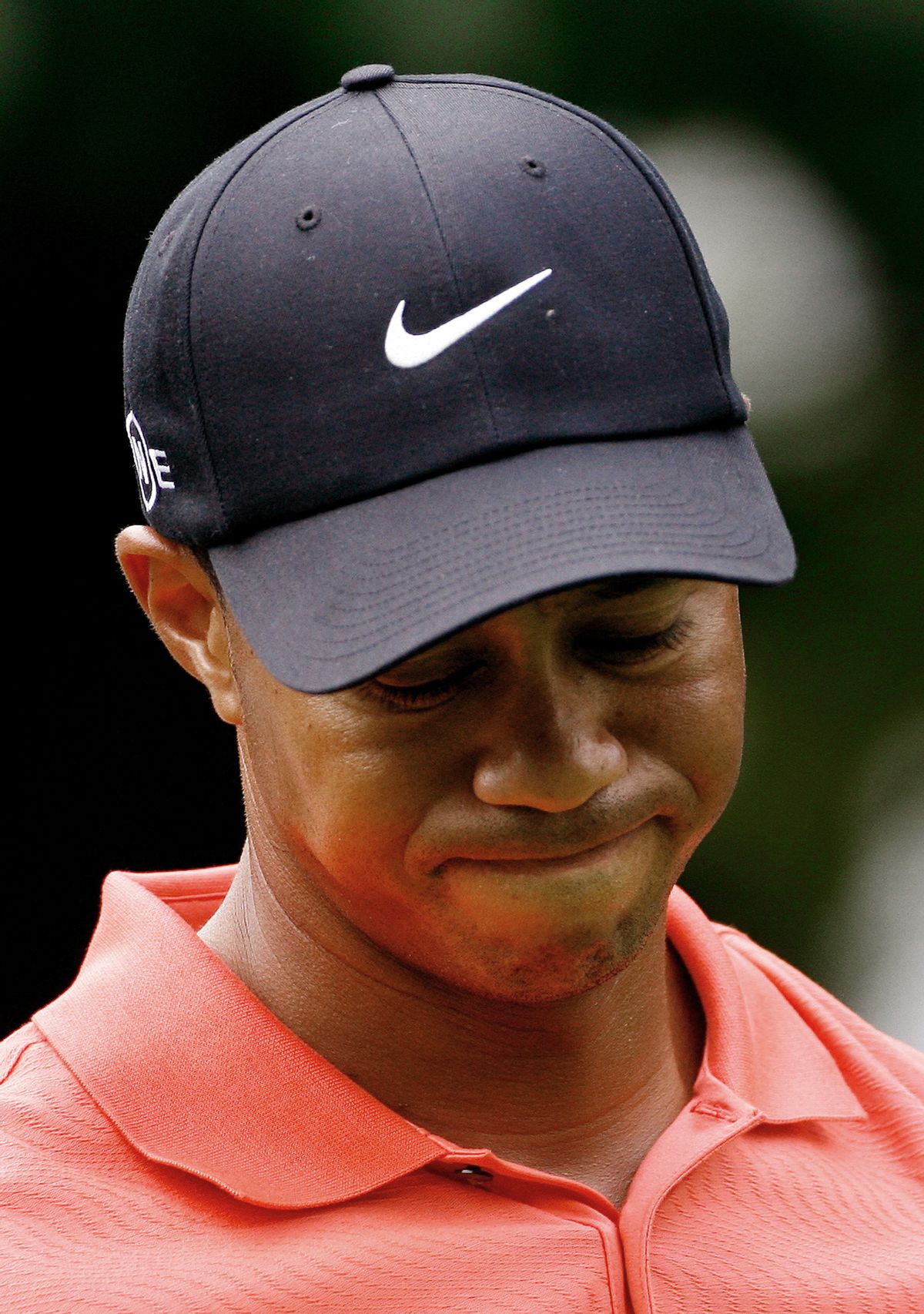 U.S. golfer Tiger Woods reacts after teeing off at the 14th hole during the World Match Play Championship at the Wentworth Club in Virginia Water, southeast England, September 14, 2006. World number one Woods, who arrived at Wentworth on the back of a remarkable run of five successive tournament wins, wielded a cold putter all day as he lost 4 & 3 to fellow American Shaun Micheel. REUTERS/Kieran Doherty (BRITAIN) (Reuters)
--

Tiger Woods, the impeccable golf pro, the man of a thousand endorsements, the handsome husband and father of two young children admitted Wednesday, "I have let my family down and I regret those transgressions with all of my heart."

Though he didn't detail those "transgressions," it's pretty clear he wasn't referring to leaving the toilet seat up. Nope, he's referring to the drama that has unfolded in the tabloids over the past week, the passion play starring his wife Elin Nordegren, party promoter Rachel Uchitel, Los Angeles waitress Jaimee Grubbs -- and a few others waiting in the wings -- using golf clubs and cellphones as props.

Since his professional debut more than 13 years ago -- which arrived with a fanfare that would have been hubris had the hype not all proved true -- Woods has managed to balance a career as one of the world's most high-profile athletes with a remarkably keen knack for privacy. At once ubiquitous and elusive, he has an image as familiar and reliable and uncontroversial as golf itself.

You want a superhuman litany of Casanova conquests or accusations of sex abuse? Try basketball. Steroids? That'd be baseball. Animal cruelty? Football. And don't even get started on boxing.

Golf, in contrast, seems so refined, so devoid of the bad-boy behavior that haunts other sports. And no one seemed more gentlemanly than Tiger Woods. Tiger, seemingly groomed from the womb to play the game, was a double minority in one of the whitest, most country club-centric pursuits ever invented. He was a crossover star, the audacity of hope itself. No drug scandal, no reports of wild nights clubbing. His public persona has been consistently serious, polite and well-behaved. Is that the explanation for the relentless level of interest in his "transgression"? Had he not such a squeaky clean appearance, the whole thing surely wouldn't have ignited with such atomic power. So now we know: Being the greatest golfer the game has ever known does not infuse your soul with heroic virtue.

When I consider Woods' actions, it's easy to put myself in the place of the wife, home alone with young children, and feel a surge of disappointment in the guy. Even if you are, as Woods' wife is, a Swedish supermodel married to a zillionaire, if your man is out boning somebody else behind your back, that has got to be a world of pain.

But really, Woods didn't let me down, any more than any other public figure whose salary isn't paid for by my tax dollars. (I'm still waiting, however, for a nice FTD Pick Me Up from Eliot Spitzer.)

The level of snooping in the private lives of public figures is nothing if not excessive. And maybe the fact that TMZ and the National Enquirer are breaking international headlines is yet another sad commentary on our insatiable tabloid culture. In our stars, and with them, ourselves, we are rapidly losing the last vestiges of privacy. Bungle a dance move? That's a YouTube sensation. Leave the house without makeup? The paparazzi are on it. And the nuances of your weight fluctuations get their own Web site.

Yet if we're losing our secrets, maybe we're gaining something in return - a skeletons-in-the-closet-slaying dose of transparency. When David Letterman told his audience, "Yes, I have" slept with other women, it was a punch line for a few days and mostly a nonstory thereafter. Our homes are all made of glass at this point, and we're learning that rocks have a way of coming back to us. Opprobrium is only fun when the naughty party is someone who's made a career in sanctimony. For the rest of us, there's no pleasure in watching the mighty fall. There isn't even much surprise.

Heroes are people, too. Not everybody cheats on his wife; not everybody busts up the Cadillac. But whether we're superstars or shopkeepers, we all mess up and we redeem ourselves and we do it all over again. "I am not without faults and I am far short of perfect," Woods wrote on his Web site. And though I don't have millions in the bank, and I can't even make par in mini golf, in that regard Tiger Woods and I are exactly the same. Oscar Wilde once observed that "Every saint has a past. Every sinner has a future." On an even moral playing field, there's very little room for pedestals. But there's far more space to breathe.