"Brothers": A wartime romance for our turbulent era 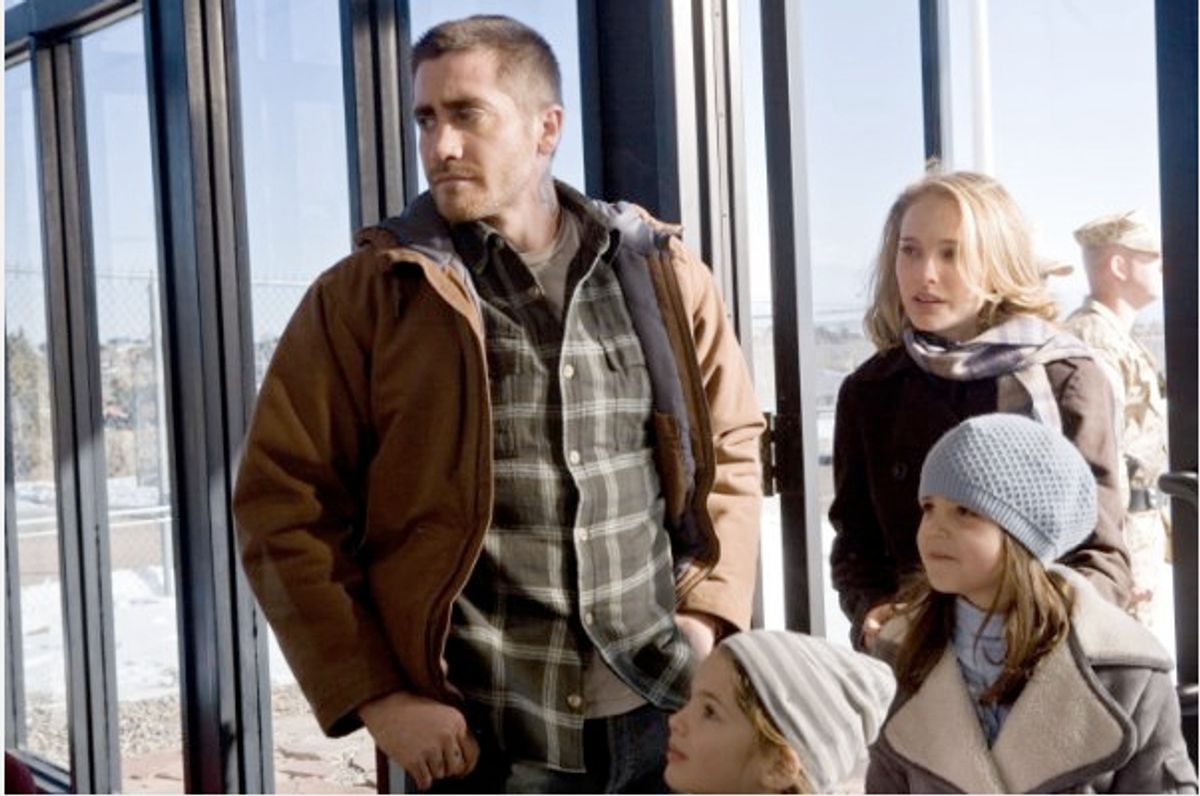 It's happening at last: Although neither the Iraq war nor certainly the war in Afghanistan has reached any sort of definitive end, we're starting to see movies -- from Hollywood and elsewhere -- that deal very specifically with the traumatic readjustment (or nonadjustment) of returning soldiers. Kimberly Peirce's "Stop-Loss," released last year, turned those difficulties into soap-opera material. Oren Moverman has recently given us a far more resonant picture, "The Messenger," which follows two war vets entrusted with the job of showing up on doorsteps to notify the next of kin (NOK for short) that their loved ones have been killed in the line of duty.

And now, from the Irish-born director Jim Sheridan, we have "Brothers," in which Tobey Maguire plays the dutiful and disciplined Capt. Sam Cahill, a soldier who's been given up for dead in Afghanistan. His wife, Grace (Natalie Portman), and two young daughters (Bailee Madison and Taylor Geare) are left bewildered and grieving. Sam's bad-apple brother, Tommy (Jake Gyllenhaal), was released from a three-year prison term just before Sam began his tour of duty. Sam, loyal to Tommy, had wanted him to reacclimate to life in the real world, though he couldn't stick around to help; Grace, on the other hand, plainly dislikes Tommy and would rather not deal with him and his problems, among them excessive drinking and general surliness.

But in Sam's absence, Tommy becomes more of a presence in the household. And while he's still a nuisance, and something of a personal train wreck, he also has an impulse to help Grace and her kids: He takes the girls out skating, and he and some pals remodel Grace's ancient, badly laid-out kitchen. More significantly, he and Grace, both grieving over Sam's loss, reach out to each other: The texture of both of their lives has changed dramatically, and they find the going rough.

Although "Brothers" deals specifically with the experience of Americans, it's based on a superb and delicate Danish film, from 2004, made by director Susanne Bier and starring Connie Nielsen. And although Sheridan and screenwriter David Benioff have, out of necessity, recast the story somewhat, they've preserved the subtlety of the original to a remarkable degree. "Brothers" manages to avoid the excessive, sanctimonious earnestness that has plagued so many of the modern American war-related pictures, from "In the Valley of Elah" to the aforementioned "Stop-Loss." Sheridan -- whose pictures include "My Left Foot," "In the Name of the Father" and "In America" -- is more interested in the personal than the strictly political here. But he's in tune with the way personal morality can constitute its own kind of politics. The horrific choices Sam has to make during wartime aren't something he can leave behind in another country, a mess that Afghan citizens will have to clean up. In fact, there's no such thing as cleanup: Sam has to carry his acts home with him, and they change him in ways that the love of his family can't soften.

Sheridan shapes the drama so casually that he succeeds in making it feel naturalistically unshaped. (In fact, he and Benioff follow the structure of Bier's version, and even the tenor of much of the dialogue, fairly closely.) Sheridan is good at capturing the mundane details of family life, particularly when it comes to little-girl siblings: He gets the petty squabbling, the pouty rivalries and the fierce camaraderie just right.

He also seems to recognize that the core idea of "Brothers" -- the notion that no soldier who's seen combat can be the same person he was before -- is a straightforward one. It's the relationships that are complex, and for that reason, this is a movie that relies on the strength of its actors. Of the three leads, Gyllenhaal gives the finest performance. He's jittery and charismatic -- his eyes shift uncomfortably, as if he were constantly looking for escape. Among Tommy's problems is the fact that he's never been the favored son. His father, an ex-Marine (played by a gruff, angular-looking Sam Shepard), approves of Sam's courage and sense of responsibility and derides Tommy as the fuckup he is. When Shepard and Gyllenhaal appear in a scene together, the air around them is charged -- it's as if the searching, vulnerable quality in Tommy's eyes registers as a taunt in the manly-man world of his father.

The chemistry is a lot less charged, unfortunately, between Gyllenhaal and Portman. Gyllenhaal is superb at channeling his confused feelings into physical awkwardness. He shows up at the family's house one morning, after a particularly unsettling episode, carrying construction materials for her kitchen. "I brought you some moulding," he mutters, and sure enough, there it is, coiled into stiff loops that keep threatening to spring out of his arms.

But Portman doesn't quite meet Gyllenhaal's challenge. She holds back too much here, as if she has more invested in playing a dutiful wife and mother than she does in playing a human, sexual being. That may not be wholly her fault. My biggest reservation about "Brothers" is the way it downplays, and too readily smooths over, the sexual attraction between Tommy and Grace. I'm not suggesting that this Hollywood version of "Brothers" needs graphic sex. (The original didn't have that, either.) But I worry that Sheridan, intentionally or otherwise, may have muted the characters' attraction to one another out of fear that American audiences expect more virtuous behavior from their war-torn families. Shot for shot, Sheridan's approach isn't radically different from Bier's. (The director of photography here is Frederick Elmes). And yet Bier gives us more to read between the lines: In her movie, there's an unspoken moodiness, a crackle of sexual tension, between Tommy and Grace's Danish counterparts (played by Nielsen and Nikolaj Lie Kaas). That understated but potent secret ingredient is missing from Sheridan's version, as sensitive and as artful as it is.

Maguire's role is the most difficult of the three, and his performance is also the weakest. Maguire has the unenviable task of showing us what it must be like for a soldier to crack, to tumble into a temporary madness that will have a lasting effect. The problem is that he plays the emotion and not the character -- in other words, he plays "crazy" instead of playing a person. At his character's crucial moment, Maguire's eyes pop; he seems to be summoning beads of sweat to the surface of his skin. But it's the acting, not the character's breaking, that registers first and foremost.

Yet whatever its faults may be, "Brothers" is still that rare creature, a picture made for adults. Watching it, I realized that it's hard to know exactly what an adult relationship in the movies should look like these days, we see so few of them. And so, when Tommy shows up at Grace's door with those crazy loops of moulding, and she greets him with a reserve that's half-shy, half-icy, I'm willing to cut them -- and Sheridan -- some slack. "Brothers" brings certain confounding, unresolvable side effects of wartime out of the shadows, without allowing us the feel-good luxury of false, facile compassion. And it recognizes that sometimes people have to carry on because of what they've seen, not in spite of it.